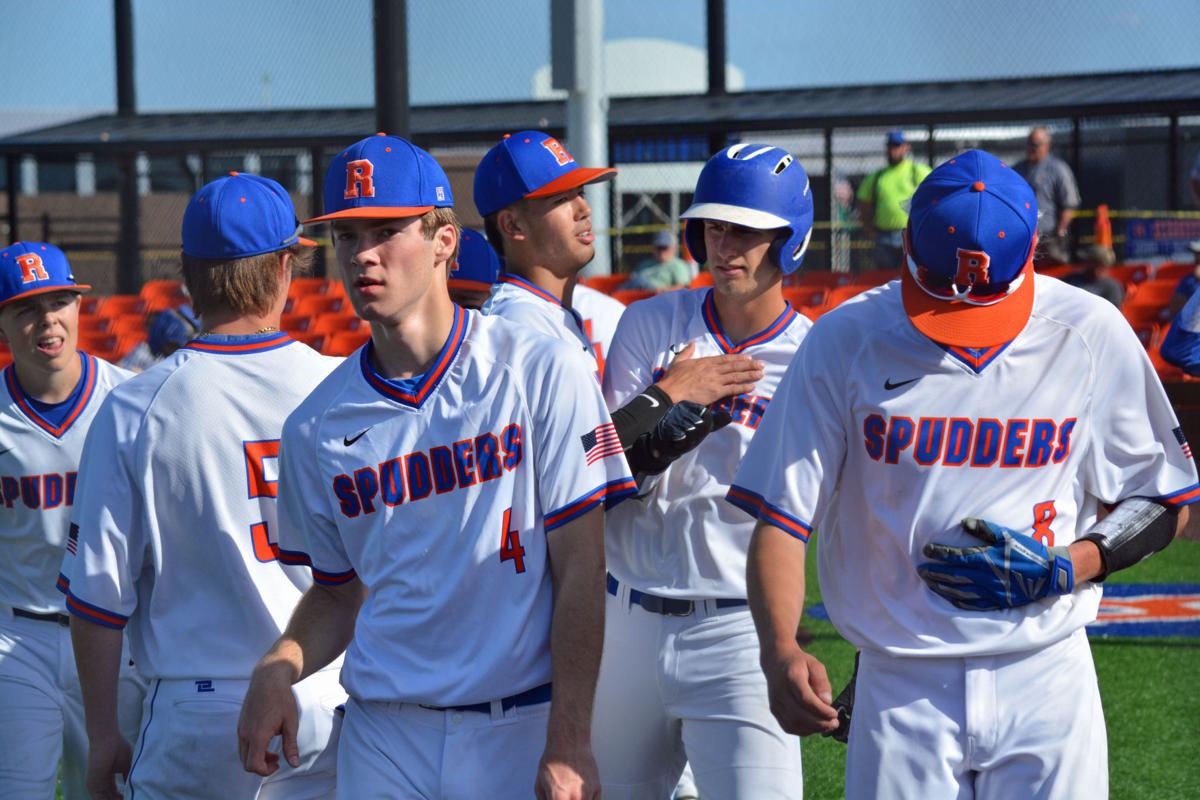 The Ridgefield Spudders congratulate Spencer Andersen after he hit a home run Tuesday. Andersen added a 3-run triple to help the Spudders beat Rochester 7-3 in the first round of the 2A district tournament at the Ridgefield Outdoor Recreation Complex. 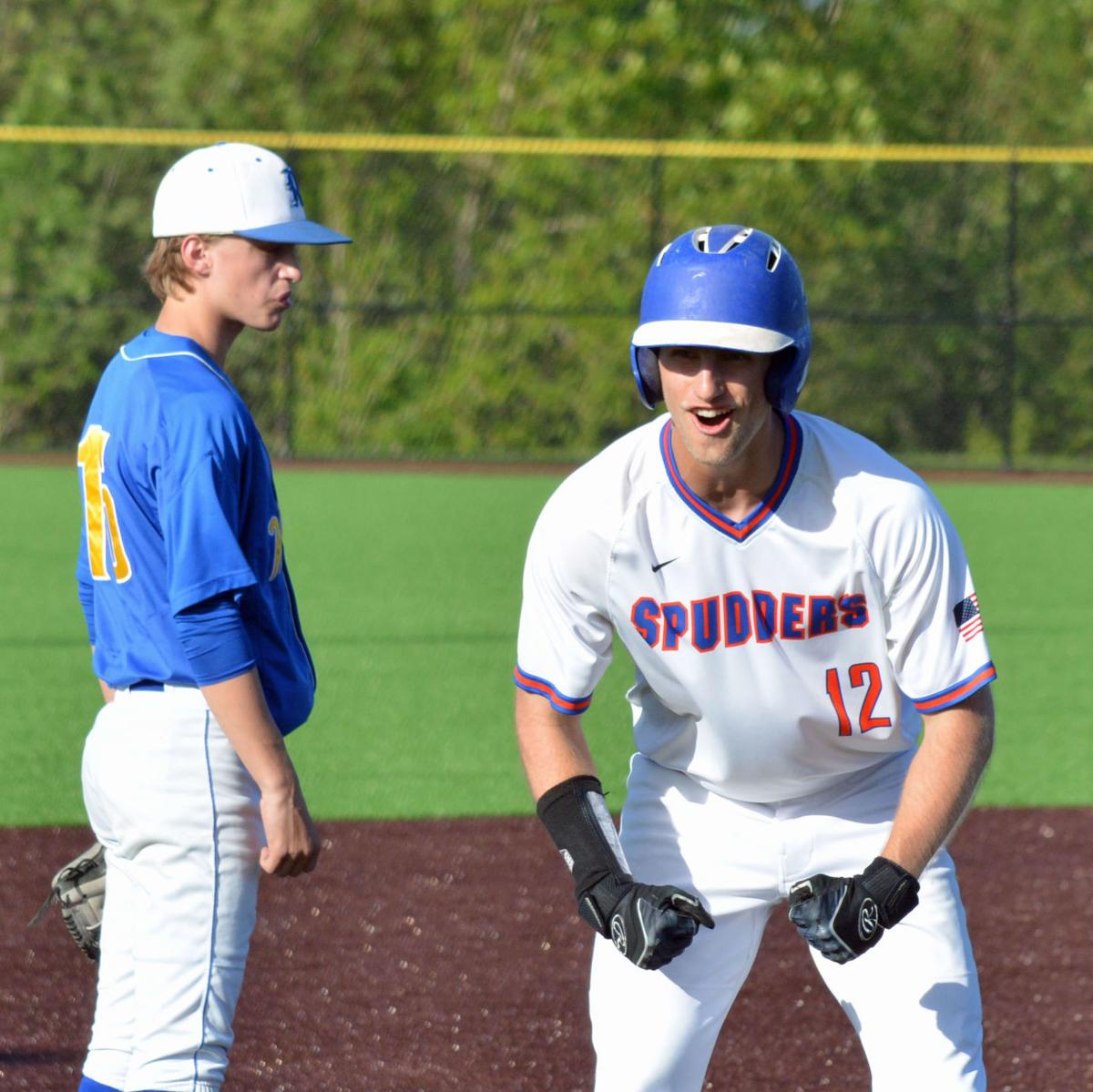 Spencer Andersen flexes his muscles after delivering a 3-run triple in the sixth inning to give Ridgefield the lead for good. 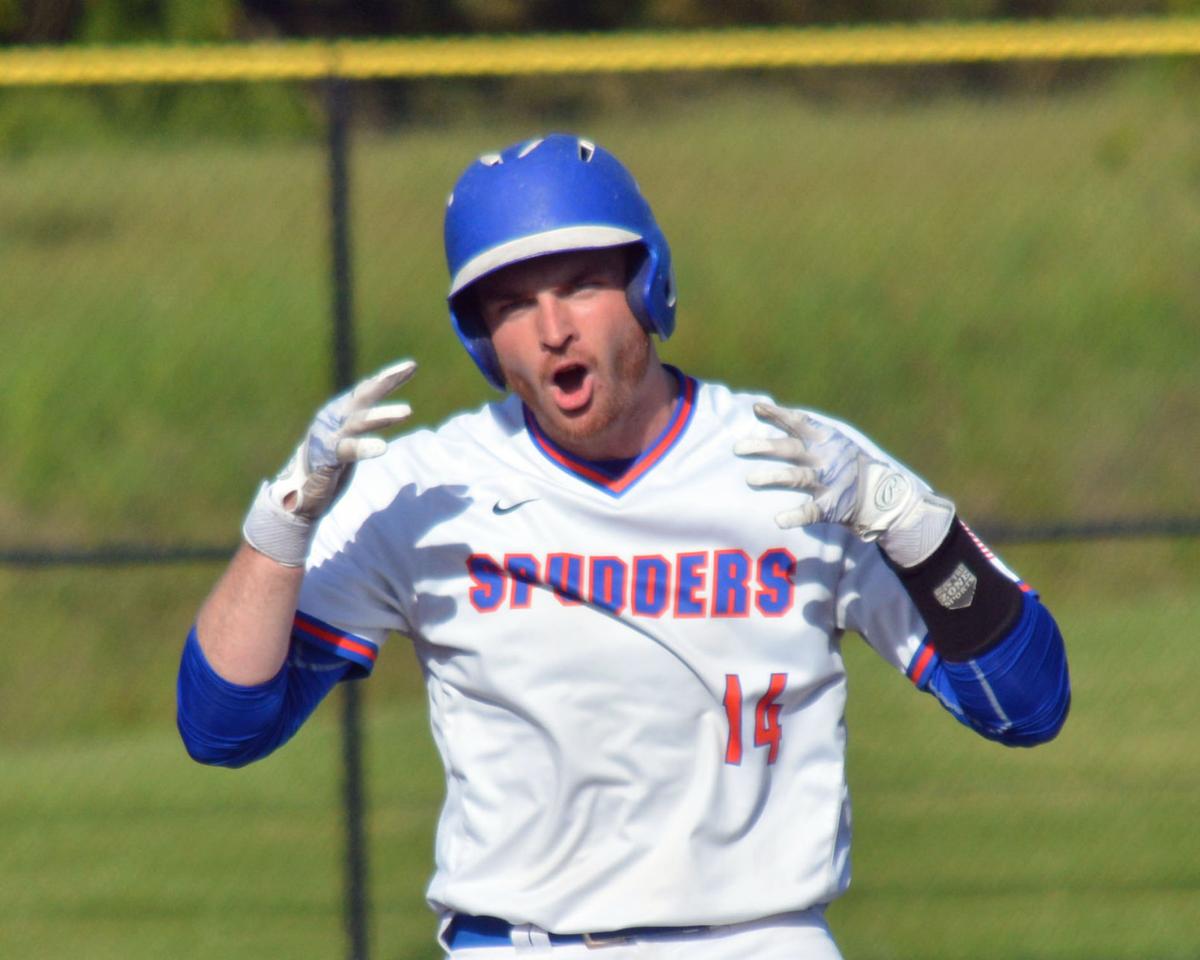 Brock Harrison went 4-for-4 at the plate to help the Spudders win their first playoff game Tuesday.

Doubling the amount of hits by Rochester only to have one run on the scoreboard, Ridgefield was due for an outburst in the first round of the 2A district tournament Tuesday.

“The message to the kids … ‘cash in the paycheck. You guys put in all this hard work. Here’s your paycheck. You got the uniform, but it doesn’t matter if you don’t cash the check,’” said head coach Nick Allen. “And they really did that in the sixth inning. When the moment was big, they came through big.”

The Spudders scored five times in the bottom of the sixth to erase a one-run deficit and then got the final three outs in the top of the seventh to defeat the Warriors 7-3 at the Ridgefield Outdoor Recreation Complex.

Three Ridgefield High School seniors led the mashing. Kellen Bringhurst tied the score at 3-3 on towering fly ball that the Rochester right fielder lost in the sun, dropped in for a hit and loaded the bases.

After hitting a home run earlier in the game, Spencer Andersen drilled a 3-2 pitch into the gap. All three Ridgefield runners scored, Andersen stood on third base and flexed his muscles.

“I was a little pumped,” he said. “I’m usually not that type pumped but this time I was because it gave us the lead.”

Already 3-for-3 in the game, Brock Harrison hit another tee shot into the outfield for an RBI single to complete his perfect day at the plate.

“I just went up there with some confidence and drove the ball,” Harrison said. “All four hits felt really good. I barrelled every one of them up.”

After losing in the first round the past three years, this is the first time this group of Spudders will be playing in the semifinals of the district tournament.

Ridgefield (15-6) faces W.F. West (20-1) at 4 p.m. Wednesday at Ed Wheeler Field in Centralia. The winning team advances to Friday’s championship round in Chehalis and qualifies for the state tournament. The losing team must come back and win two games to get to state.

Whatever happens this week, the Spudders went out with a bang at their new home park.

“I wish I could play here another year but that’s not the case,” Harrison said. “I’m really excited that they have this to Ridgefield because it’s growing so much.”

Andersen signed a 10-day contract with the Ridgefield Raptors, who will debut in the West Coast League and play games at the Ridgefield Outdoor Recreation Complex this summer, before going off to play baseball for Lower Columbia Community College in Longview.

“This is our home field. I love it,” Andersen said. “I can’t wait. I want to stay busy this summer.”

“I love baseball. It’s going to be hard for me to say goodbye to it,” Harrison said. “I’ve always been a football guy, but baseball has been right up there with it. I’m just trying to finish the season strong with all the boys.”