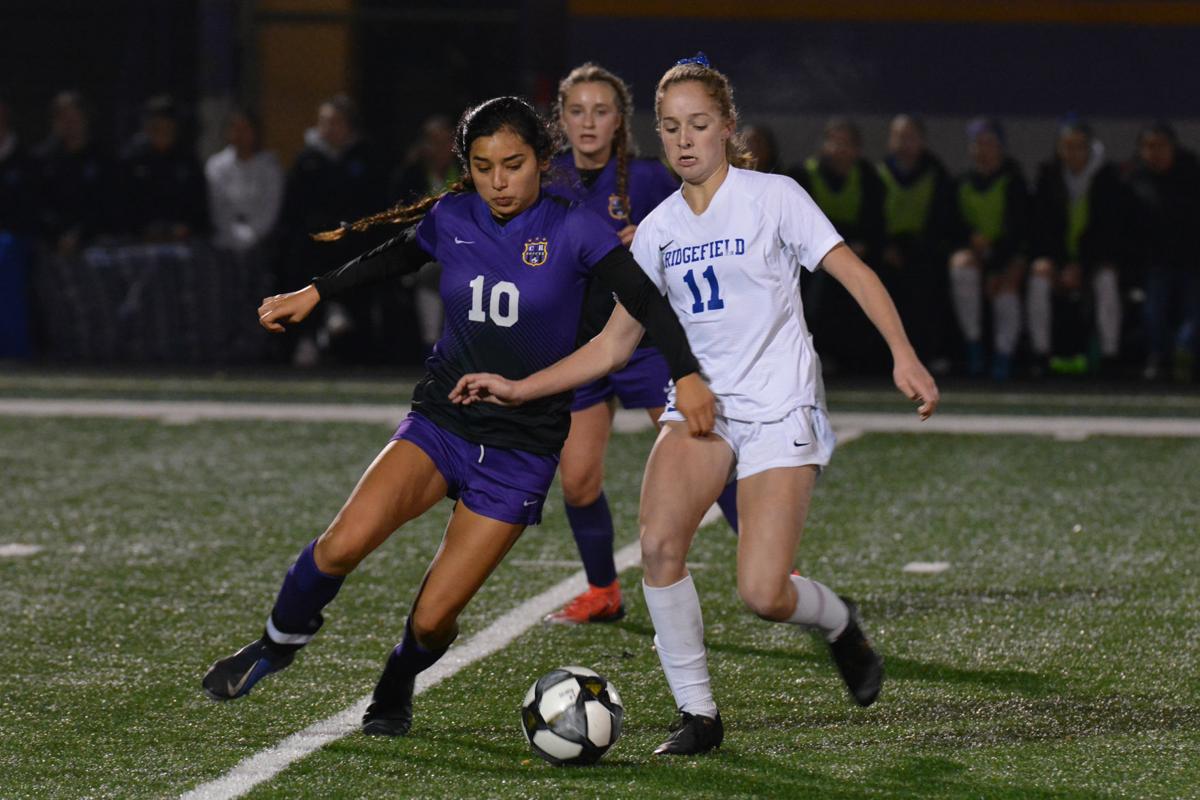 Ridgefield player Claire Jones and Columbia River player Yaneisy Rodriguez fight for the ball in a match at Columbia River High School, Nov. 7. Claire scored one of the two Ridgefield goals on Thursday. 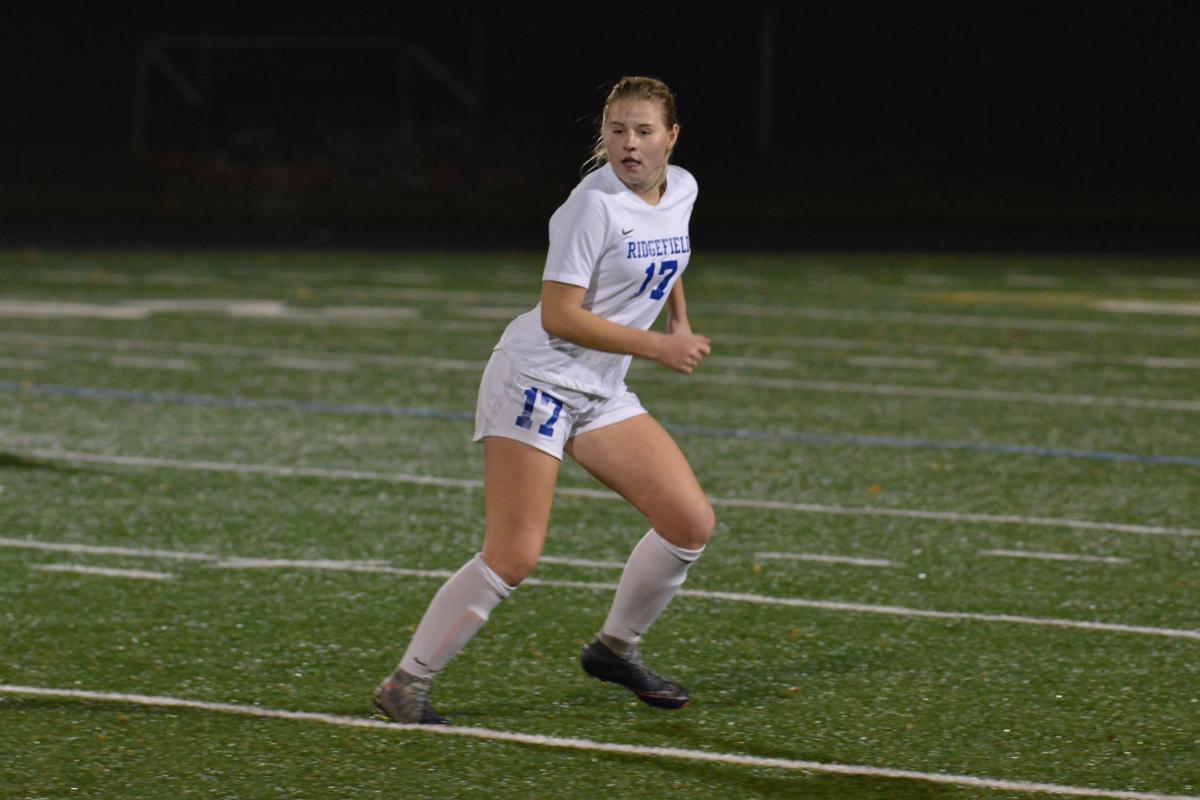 Ridgefield junior Alyssa Dewey looks downfield for the ball in the District Championship match at Columbia River High School on Nov. 7. Dewey scored a goal for Ridgefield in the first half of the match. 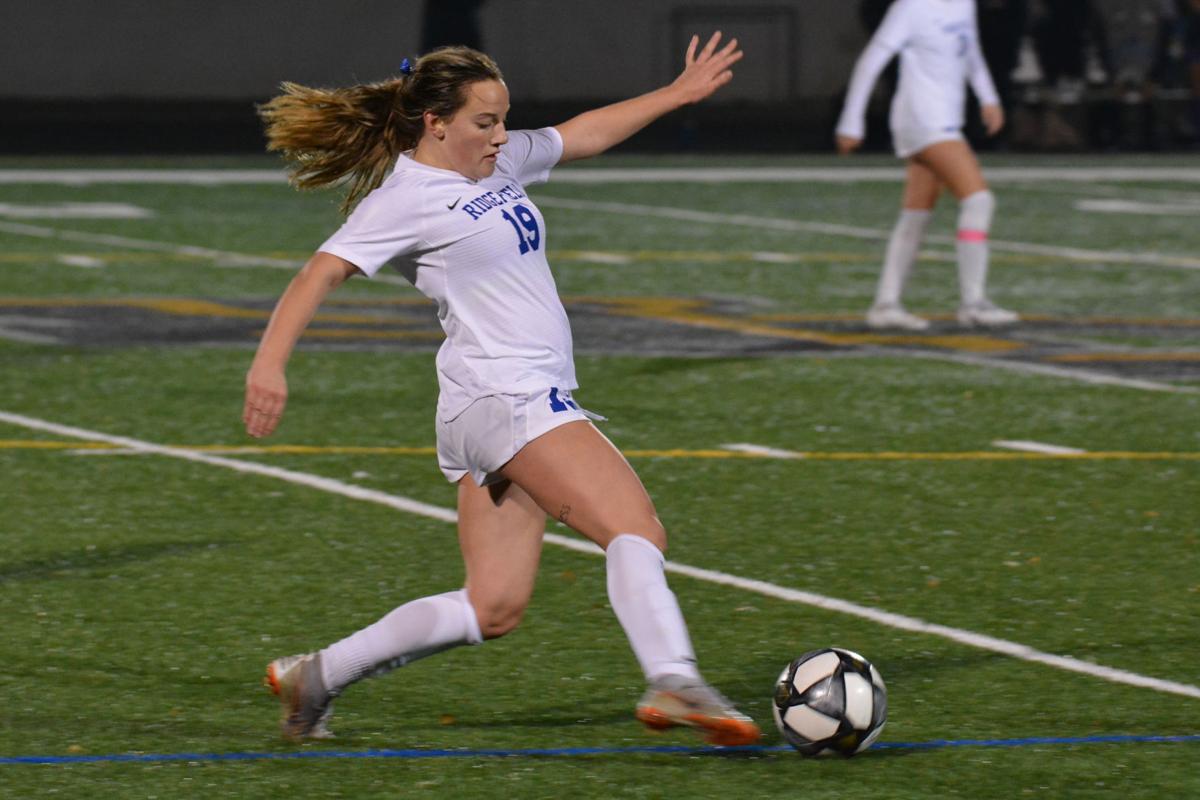 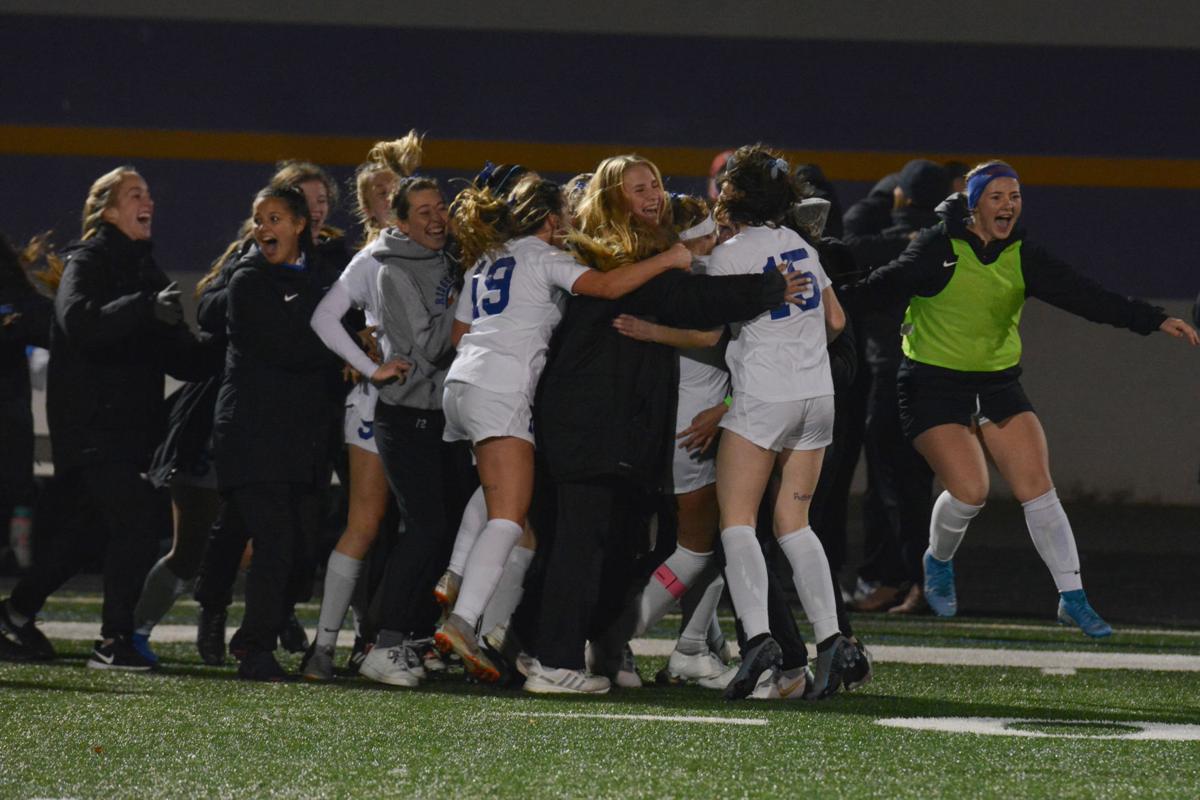 The Ridgefield Spudders celebrate after winning the District Championship at Columbia River High School on Thursday, Nov. 7. The win ended a three-year drought for the team and gave the Columbia River Chieftains their first loss of the season. 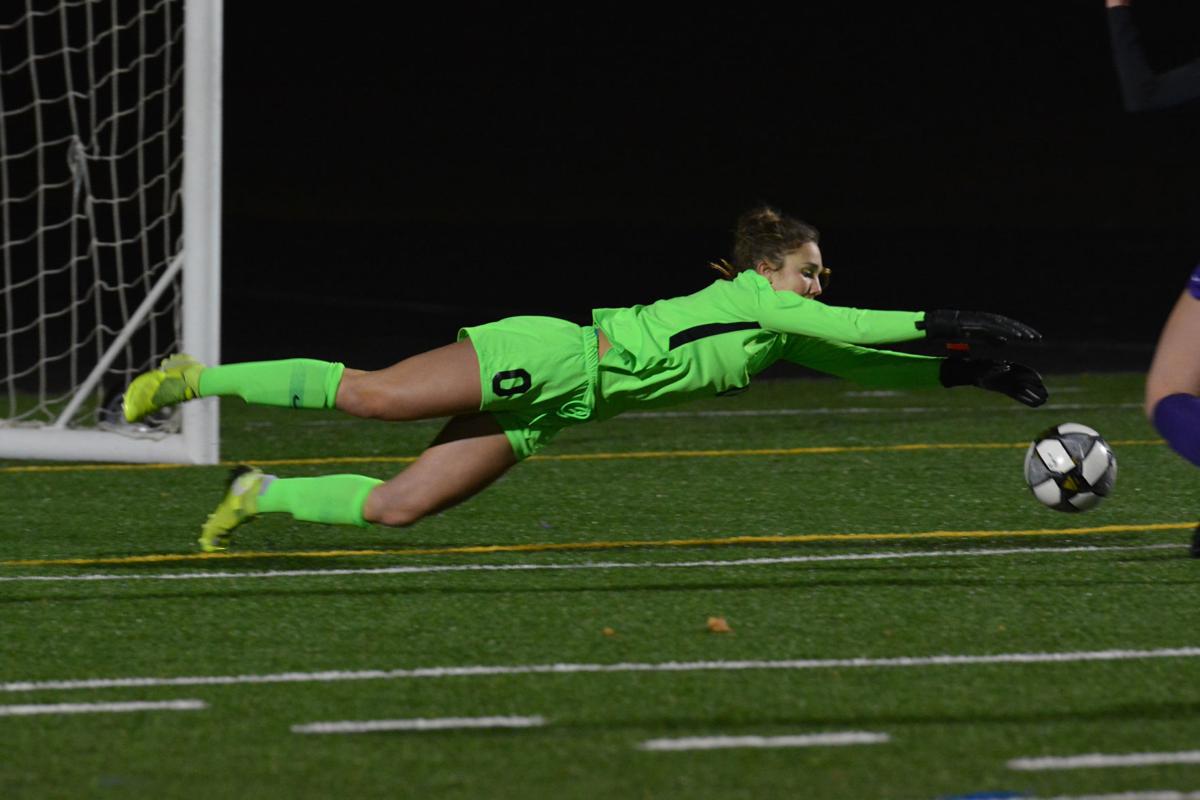 The match started off strong for the Spudders as a large crowd sat in the grandstands.

With just over 20 minutes left to play in the first half, junior Alyssa Dewey found the back of the net after an assist from freshman forward Claire Jones. Ridgefield fans went wild as the Spuds gained the lead on the undefeated defending district champions going into halftime.

“That was my first goal of the season,” Dewey said, explaining how until this year, she was a swing player for the team. “I’m really proud of myself and this team. We’ve worked really hard to get to this point.”

After the half, the Chieftains gave Ridgefield a run for their money as they kept the ball on the offensive side of the pitch for a portion of the second half. After a few saves from goalie Paige Jones, Columbia River eventually scored a goal with 18:30 left in the second half. Following the goal, the Spuds kept the ball in the offensive zone until freshman Claire Jones delivered a goal with a kick from far downfield.

“I’ve been really working on shooting from farther out and using my leg that I do have,” Jones said. “To be able to put one in tonight as a freshman, it feels really good.”

After a crucial miss from Columbia River in the final minutes of the game, the Ridgefield Spudders won the district trophy in full time for the school after a three-year drought.

“It’s unbelievable,” Claire Jones said about winning the trophy in the first year of her high school soccer career. “I will never forget this moment.”

As a freshman, Claire Jones said she had never played anything as competitive as this game in her life.

“It’s so different than club,” she said, mentioning that she plans to perfect her craft as she and the team head into the state tournament. “This team works like a family … We’re not just teammates, we’re friends.”

Dewey later said the team is working on the physicality of the game and getting the ball out of the box as they head into the tournament next week.

Ridgefield Head Coach Robby Trimbo said that throughout the year the Spudders have been working on “us” and pushing through the season.

“We have had ups and downs; we had a great start this season,” he said. “It’s high school soccer, the craziest most intense 10 to 12 weeks of your whole life.

As for the game against Columbia River, Trimbo said the team had been preparing and working on the mental side of the game.

“The biggest thing is attitude in a game like this,” he said. “There’s no secrets, we know river is such a phenomenal team and when you play in a league with a team like them, they expect you to be scared.”

Trimbo said the players having confidence is what kept the team in the offensive zone for a lot of the game.

“At this point in the season, everybody is tired,” he said. “There’s no massive things you can do in a training session physically before a game like this.”

As for the state tournament, Trimbo said the team is going to be taking it “one game at a time.”

“We have three really talented freshmen that are learning quickly,” he said. “They’re adapting and they certainly don’t play like freshmen.”

Trimbo is most proud of the girls’ attitudes and hearts. He’s enjoying watching the girls grow up. “Trophies come and go, we’ve won that thing before, I’ve lost that thing before,” he said about the district trophy. “It’s cool tonight, but I will know these girls for the rest of their life. Knowing that this night is theirs and they’re going to have that memory for the rest of their life, that’s what I’m most proud of.”