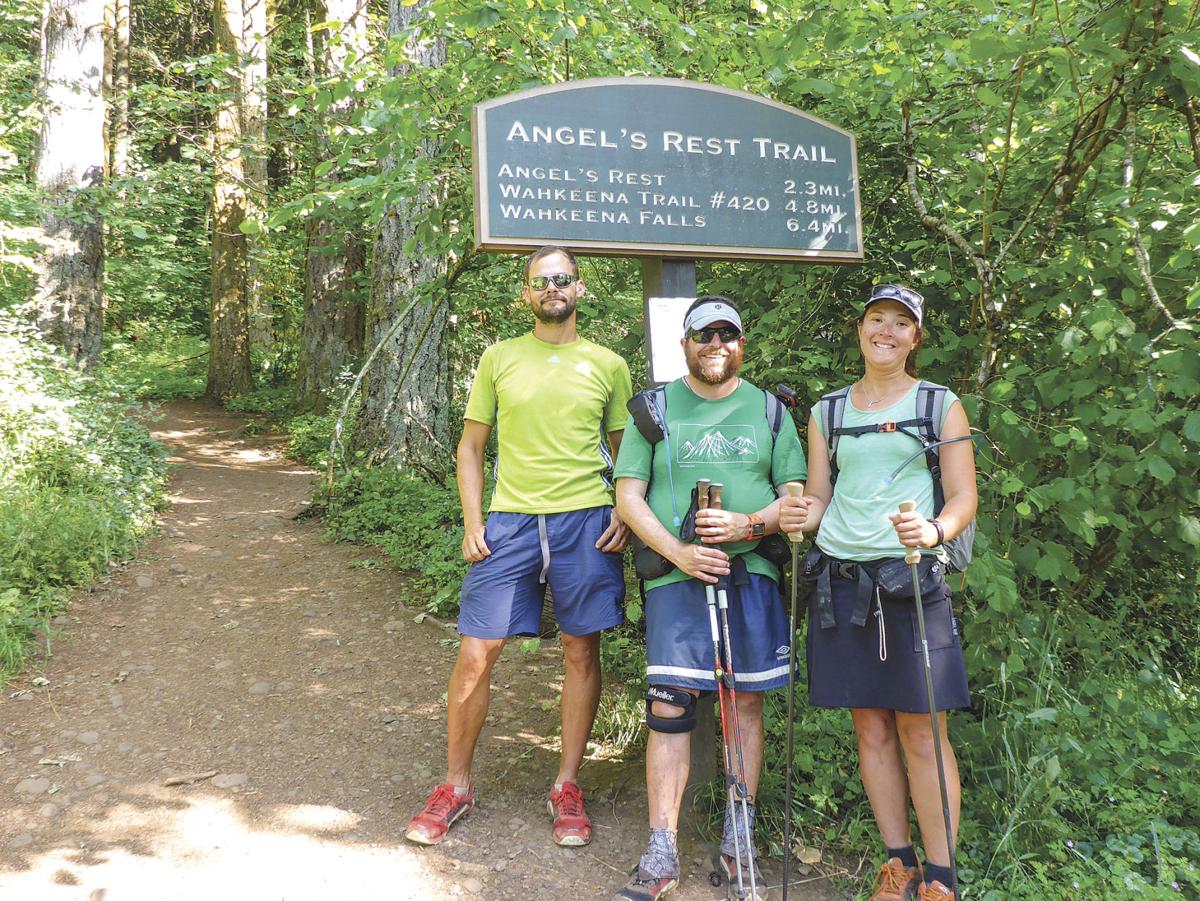 ANGELS REST TRAILHEAD in Oregon marked the end of 293 miles of the Chinook Trail. Shown here (from left-to-right) are Brian Boshart, Whitney LaRuffa, and Liz  Thomas. 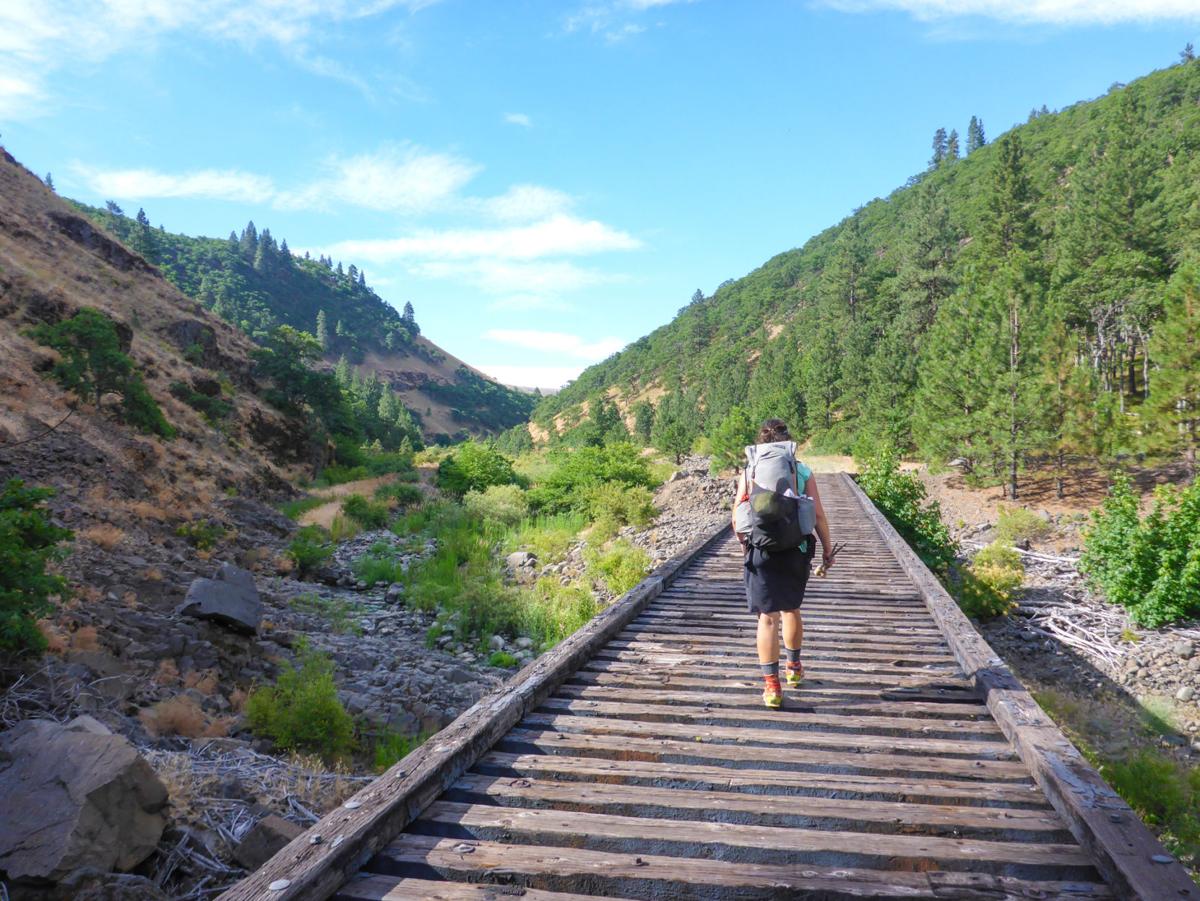 LIZ THOMAS works her way along an old railroad trestle in Swale Creek Canyon, this portion of the Chinook Trail route used the Klickitat Trail to get east towards Maryhill.

ANGELS REST TRAILHEAD in Oregon marked the end of 293 miles of the Chinook Trail. Shown here (from left-to-right) are Brian Boshart, Whitney LaRuffa, and Liz  Thomas.

LIZ THOMAS works her way along an old railroad trestle in Swale Creek Canyon, this portion of the Chinook Trail route used the Klickitat Trail to get east towards Maryhill.

For decades, hikers dreamed of a 300-mile loop trail connecting the deep forest canopies, jagged crystalline waterfalls and sprawling grasslands of the Columbia River Gorge. Last summer, a trio of hikers made that dream reality.

Veteran endurance hiker Whitney LaRuffa stumbled across plans for such a trail while researching long distance hiking routes near his Portland home in November 2013. At that time, many sections of the route, called the Chinook Trail, were nothing more than lines on a sparsely detailed map. Nobody had hiked the entire trail.

Lured by the idea of pioneering a long distance trail easily accessible from his backyard, LaRuffa spent nearly six months pouring over maps and planning routes. In July 2014, the 37-year-old lumber broker completed the first hike of the entire Chinook Trail with friends Elizabeth Thomas, of Denver, Colo., and Brian Boshart, of Portland. He now hopes to publish maps and guidebooks that help other hikers follow in the trio’s boot prints.

“I never expected it to happen this soon,” said Ted Klump, a founding member and former president of the Chinook Trails Association, which aims to establish a trail along the rim of the Columbia River Gorge.

Former Vancouver school principals Ed Robertson and Don Cannard first envisioned the Chinook Trail in 1986, while standing atop Silver Star Mountain, east of Battle Ground. Today, the Chinook Trails Association includes about 200 volunteers who build and maintain trails that could eventually tie together the entire loop. The trail’s current route stretches from the Vancouver area east to Maryhill, crosses the Columbia River and then circles back through Oregon to Vancouver.

Before LaRuffa and his companions set out, Chinook Trails volunteers had already identified existing trails or built new trails connecting several pieces of the route. The trail’s first 30 miles had been named a National Recreation Trail. But volunteers thought they would still need to dig hundreds more miles of trail to make the route work, says current Chinook Trails President Evan Hull.

LaRuffa and company disproved that notion. They trekked gravel forest roads, walked busy highways, and even bushwhacked when no hiking trail was available. Their 11-day journey began in Moulton Falls State Park and ended at Angel’s Rest, near the Gorge’s west end.

“They proved that the Chinook trail isn’t a dug trail. It’s a combination trail,” Hull said.

Chinook Trails Association members weren’t aware that other long-distance routes, such as the Pacific Crest Trail or Appalachian Trail, rely on mixtures of roads and non-motorized trails, Hull says. “That was a very big eye opener for me.”

Boshart, 42, Thomas, 28, and LaRuffa all have extensive long distance hiking experience, including time spent on the Pacific Crest Trail. They say the Chinook trail feels like a cross between Pacific Crest Trail wilderness and the cobblestone roads college students backpack between Spanish villages. Sometimes, the crew walked for days without seeing another person. But they also crashed at a friends’ home in Hood River and ate at restaurants in small towns along their way.

“That’s what makes it neat,” LaRuffa said. “You get to experience a trail and then the culture aspects of the road walking.”

These brushes with civilization allow hikers to learn about the Gorge from locals, LaRuffa says. Friendly residents convinced his team to reroute around hazards, such as busy roads. The trio also received history lessons about Celilo Falls and native villages from a fifth-generation rancher near The Dalles.

“You get a much deeper connection with that history, you get to live that history a little bit,” LaRuffa said. “It’s really kind of neat to connect with it like that on a personal level.”

The trail takes hikers from the 4,300-foot-high peak of Silver Star Mountain to sea level. It passes through dense, rain-soaked old growth in the west, before giving way to more open hardwood forests near White Salmon. Hikers then suddenly find themselves traversing the dramatic, golden-brown high-desert of the eastern Gorge, LaRuffa says.

“To have a different ecosystem every 50 miles is one of the coolest things you could see on a long trail,” said Thomas, who has hiked about a dozen long-distance trails and holds the women’s unassisted speed record on the Appalachian Trail.

Prepared for the challenge

LaRuffa’s crew hiked through rain and 50-degree temperatures at first. By Day 4, however, the temperature spiked to nearly 100 degrees, and the team struggled to find water in places. Most of the terrain wasn’t especially challenging, LaRuffa said. But some areas were steep and overgrown, and grinding uphill all day in the heat was sometimes taxing.

“You’ve got to be prepped for what (the trail) can dish out at you,” LaRuffa said.

LaRuffa says preparation was the hardest part of the Chinook Trail hike. Even after spending months studying the area, LaRuffa’s trio had to make route adjustments when they discovered a trail marked on their maps had been overgrown. They walked semi-truck crowded roads with narrow shoulders and had trouble crossing the Columbia River near Biggs, OR.

Both LaRuffa and Chinook Trails Association members are searching for detours around some of the trouble spots. LaRuffa hopes the maps and guidebooks and maps he’s working on will also help future hikers prepare for the trip. He says the books and maps may not be complete until the fall, but Thomas hopes they’ll be done in time for this summer’s hiking season.

“It was such a cool route we really want people to be able to check it out,” Thomas said.