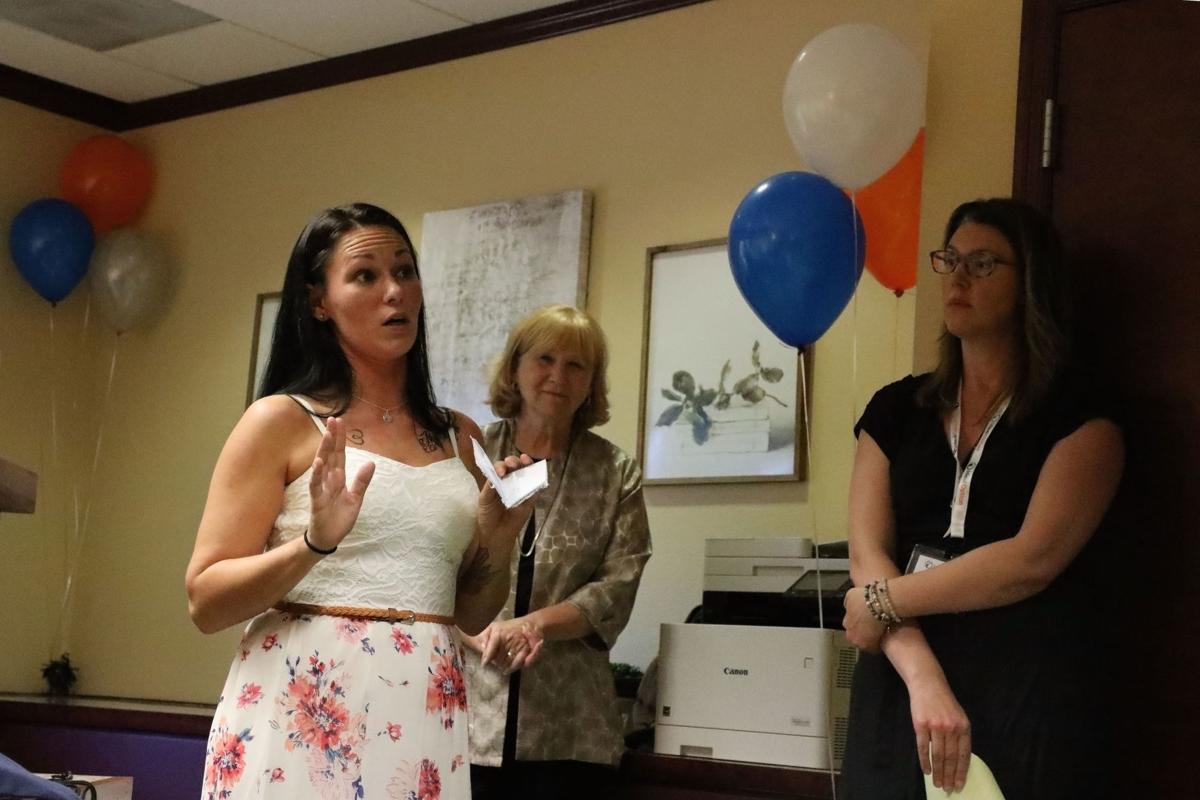 Vancouver resident Jenna Tuttle (left) shares her story with Anne McEnerny-Ogle, the Mayor of Vancouver (center), and advanced registered nurse practitioner Lindsey Huckett at the grand opening of Ideal Option in Vancouver Aug. 1. Tuttle has been now sober for three years, thanks to the help of Ideal Option. 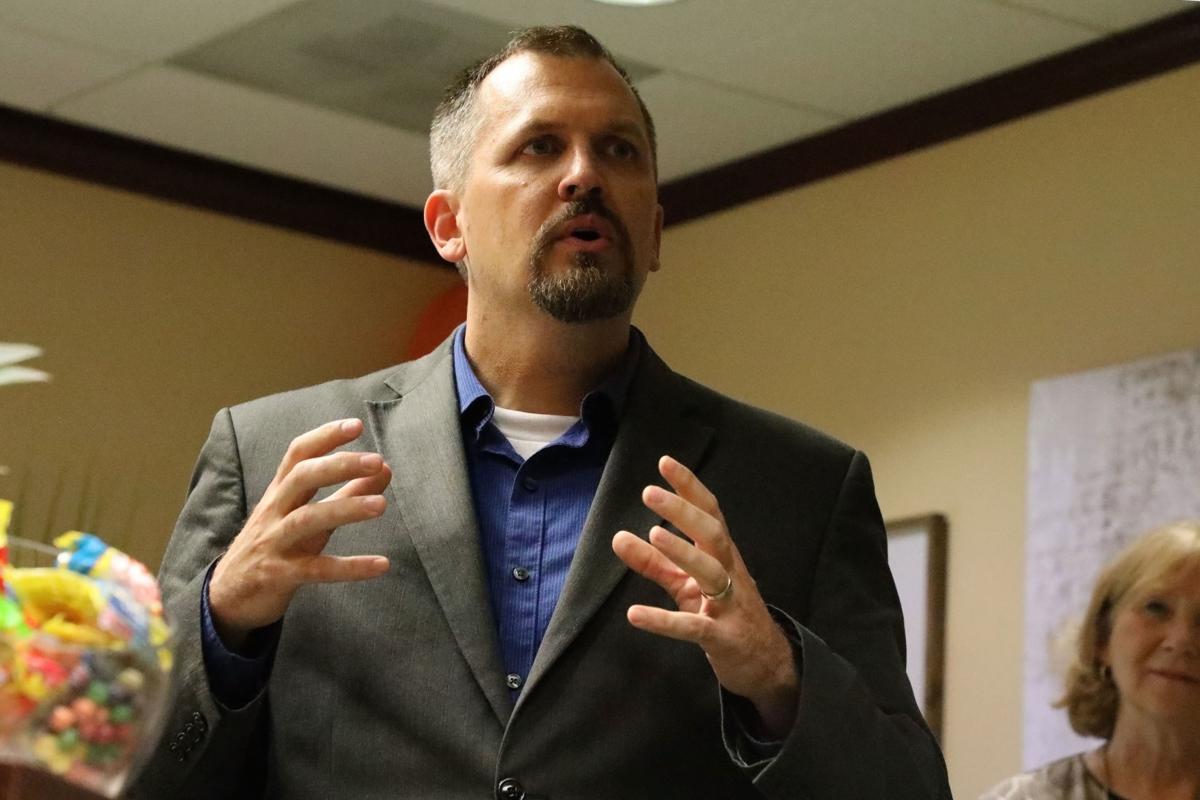 Vancouver officials and representatives of a regional health nonprofit gathered in the city’s downtown to celebrate the opening of a new medication-assisted treatment clinic, highlighting efforts to provide options for those in Clark County looking to beat their addiction.

On Aug. 1 “Ideal Option” welcomed guests for an open house at its newest location at 315 W Mill Plain Blvd., Vancouver. The clinic was the second location of the national healthcare provider in Vancouver, joining one in Cascade Park.

The clinic offers medication-assisted treatment, which involves the use of drugs along with behavioral health counseling to handle addiction, specifically opioid addiction in the case of Ideal Option. One drug, really a combination of two drugs, was front-and-center among those who spoke, as Southwest Washington Accountable Community of Health (SWACH) Opioid Collaborative Manager Jim Jensen talked about the benefits of Suboxone during the open house.

Suboxone is part naloxone and buprenorphine and allows for treatment of withdrawal symptoms from opioids such as heroin and certain prescription drugs. Jensen said research into Suboxone over the past five to 10 years has shown that the medication acts on reward pathways in the brain that opioids affect in a stable way, allowing those with addiction to be in a state of mind to access the other services they may need, like access to housing or behavioral health.

“There’s even some compelling evidence in the research right now that Suboxone may help people grow back the parts and function of the brain that they need to get sober more naturally,” Jensen said.

According to SWACH data, in 2017 39 individuals died in Clark County due to overdose, with deaths increasing 40% over the last decade. Opioid-related hospitalizations also increased by some 200% in that same timeframe.

Jensen commented on the evolution of understanding of addiction, from characterizing mental health issues as a “moral failing” to something that was partly physiological in nature.

“We’re at a precipice now. We’re at a place where we need to start understanding the physical aspects to addiction,” Jensen said. He spoke briefly about the reward pathways opioids and other drugs act on, explaining the mechanism developed as a way to encourage doing things for survival.

“Those systems that reward us for doing something essential to your survival are hijacked by addiction,” Jensen said.

Jensen stressed the importance of medication-assisted treatment having low barriers to receive it, explaining that if receiving the treatment forced patients to jump through hoops, “what people do is they just don’t get sober.”

Jensen said opioid addiction differs from other drugs in that those addicted are usually “running away from something” than seeking something out, as may be the case in cocaine or methamphetamine addictions — “rather than going ‘I want to party’ they say ‘I don’t want to be sick,’” he explained.

Whereas in the past methadone had been the most well-known drug to treat opioid addiction, Jensen said how it affects the brain was different and less ideal than what Suboxone can provide. He explained that the combination of drugs worked to both keep a patient from the worst of withdrawal while not allowing as much potential for abuse than the drug the patient was addicted to had.

“It prevents the up-and-down sort of nightmare lifestyle that is opiate addiction,” Jensen said.

The opening of another Ideal Option location fit well with the goal of SWACH’s Clark County Opioid Task Force, a group that formed earlier this year to deal with the epidemic of addiction to the class of drugs. Jensen said looking at medication-assisted treatment was essential to having a continuum of care for individuals with addiction, explaining it was one of the entry points for patients to get the services they need. Ultimately the task force is seeking a goal of having “no wrong doors” for people looking to treat their addictions, be it through places like Ideal Option, emergency departments at hospitals or even at the Clark County Jail.

“We want to create a situation in which when there’s a window of sobriety, no matter which door they walk into it was the right one,” Jensen said.

Apart from speakers including Vancouver Mayor Anne McEnerny-Ogle, city councilor Ty Stober and Jensen, the open house also featured success stories of the type of treatment. Janna Tuttle said she had struggled with addiction for 14 years, losing her family and doing a two-and-a-half year stint in prison. Following time in solitary confinement Tuttle said she began efforts to get into treatment, eventually getting on Suboxone after she was released which she said allowed her to become stable.

“If it wasn’t for being on Suboxone I don’t feel like I would be standing in front of you guys today,” Tuttle remarked. She said coming back to Clark County was a frightening proposition with the potential to encounter people from her past in addiction.

Tuttle said the stability she has with medication-assisted treatment allowed her to get full custody of her son, adding she recently got married and now has a relationship with her mother she never had growing up.

“The relationship that we have today … I couldn’t imagine not having it with her,” Tuttle remarked.