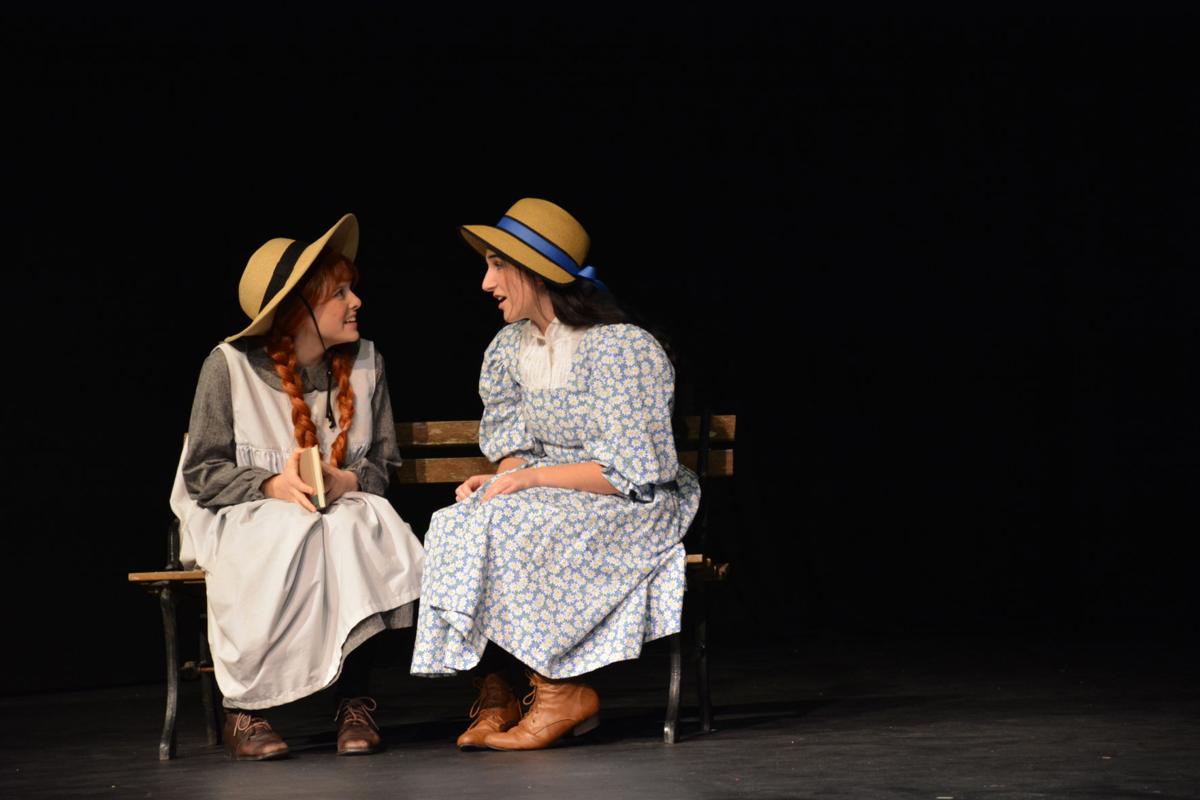 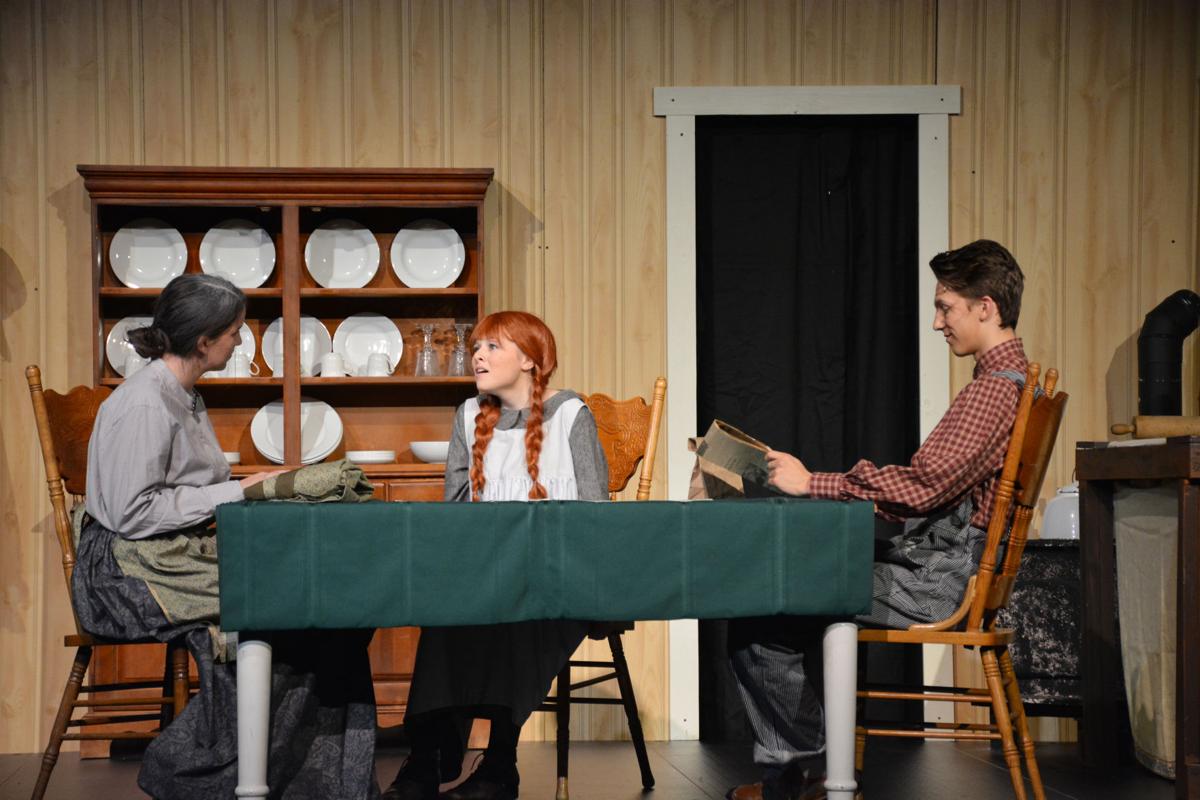 Anne strongly voices one of her many opinions during dinner with her adoptive family Marilla, played by Maria Wetzbarger, and Mathew Cuthbert, played by Tanner Opdahl. All three student actors hope to visit Festival Fringe next summer.

While the Battle Ground High School Drama Club is in the midst of its production of “Anne of Green Gables,” the club is also raising money behind the scenes for a “once in a lifetime” trip to Edinburgh, Scotland, for the American High School Theatre festival at the Edinburgh Festival Fringe.

Each year, only 3,500 high schools in the United States are nominated to go to the festival. Of those, 1,500 apply and only 40 are chosen to attend. The Battle Ground High School Drama Club was nominated and accepted for a second time in 2019 to visit the festival in 2020.

“It’s a huge honor,” said Stephan “Cash” Henry, an English and drama teacher at Battle Ground High School. “Most schools don’t even get nominated once. So to be nominated twice is unbelievable.”

Henry said the process to attend is complicated as the program first needs to be nominated by an anonymous theatre professional. Following the nomination, the American High School Theatre Festival tells the school they’ve been nominated. The school then applies and needs to have their application accepted.

The Edinburgh Festival Fringe is the largest arts festival in the world. Last year, the festival spanned 25 days and featured more than 55,000 performances in over 300 venues. Established in 1947, the festival takes place annually in Edinburgh in the month of August. This year, the Battle Ground High School Drama Club is raising money to go back.

“Being part of the Fringe was honestly a dream come true. I remember it not feeling real until we got on the first flight to London. It took so much hard work to get everyone there, but the payoff was so worth it. I never thought I’d be able to see Shakespeare’s Globe Theater, let alone take an acting workshop at it,” past BGHS drama student and Fringe Festival attendee Jessie Akerley said. “Being a part of something thousands of people dream to be a part of is an incredibly humbling feeling. My advice to the new group of amazing theater kids is have fun, eat the weird food, and act like it’s a once in a lifetime opportunity, because it is!”

Henry said that the trip to Scotland is an “eye opener” for most students who embark on the cross-ocean theater journey because most of the students in the program have never traveled to a place as culturally different as Scotland.

“A lot of these kids have never been out of the country,” he said. “Some have never even left the area.”

“The greatest things that I ever heard from the last trip (2017) was at a get-together debrief in one of the common rooms at the university of Edinburgh,” Henry said.

The student told him the experience in Scotland taught him to be “OK on his own” and “able to be independent, he recalled.

“Hearing that was the greatest thing for me,” he said.

Along with the cultural experience, Henry said the kids benefit greatly from the techniques, classes and workshops at the festival as well as watching performances from people from all around the globe.

“Because there are so many people there, you learn so many different things, like different styles, different cultures, different ways to do things and how you can add that to your skill set,” Battle Ground drama student Tanner Opdahl said. “It’s a bringing forth together of a big collection of ideas.”

As well as playing the part of Mathew Cuthbert in the current production of “Anne of Green Gables,” Opdahl is one of the 13 high schoolers on the list to go to the festival next August, that is if he and the rest of the club raise enough money. One of the biggest barriers to entry into the festival is the financial aspect, one student said.

To combat this barrier to entry, drama club members going to Scotland next fall are raising money on their own through bazaars, art and other individual fundraising. The club is raising money as whole together, as well. However, Henry said the program relies on donations from “generous hearts in the community” to allow the students to go

“There are some really wonderful kids involved this time around, and due to no fault of their own, just due to the fact that they don’t have a lot of money options for raising funds, they are struggling to get the necessary amounts to get them on the trip,” Henry said. “I believe they all deserve to go, and I hope that with the financial help from some generous folks in the neighborhood they will be able to come along on this educational and life-changing experience.”

As well as going to Scotland, the Battle Ground Drama Club is in the middle of their production of “Anne of Green Gables.” The adaptation of L.M. Montgomery’s classic novel features 16 actors and actresses putting on a show of “finding where you belong.”

You can see the play at 7 p.m. on Nov. 21, 22 and 23 at Battle Ground High School. Doors for the show open at 6:30 and ticket prices are $7 for the general public with discounts for students and senior citizens.

If you would like to support the drama club and their trip to Edinburgh, you can send a check made out to BGHS to:

Supporters can also donate directly to the online fundraising site, which is located at: bit.ly/BGScots