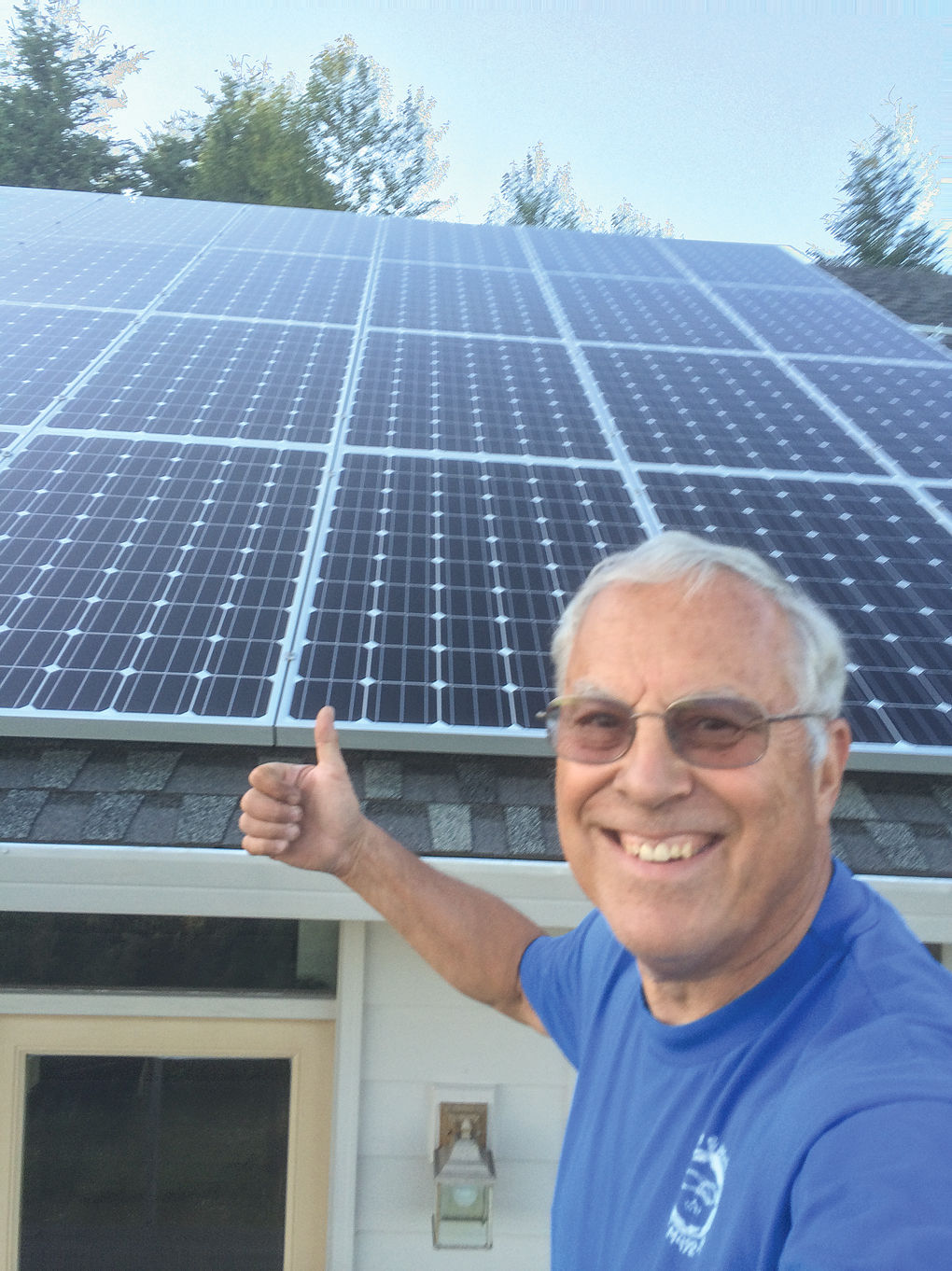 JOHN POLOS, of Battle Ground, shows off the 32 solar panels he had installed on the roof of his home in June. The panels, along with a bevy of other energy-efficient installations such as a geothermal heat pump, have reduced Polos’ energy bills by 70 percent. 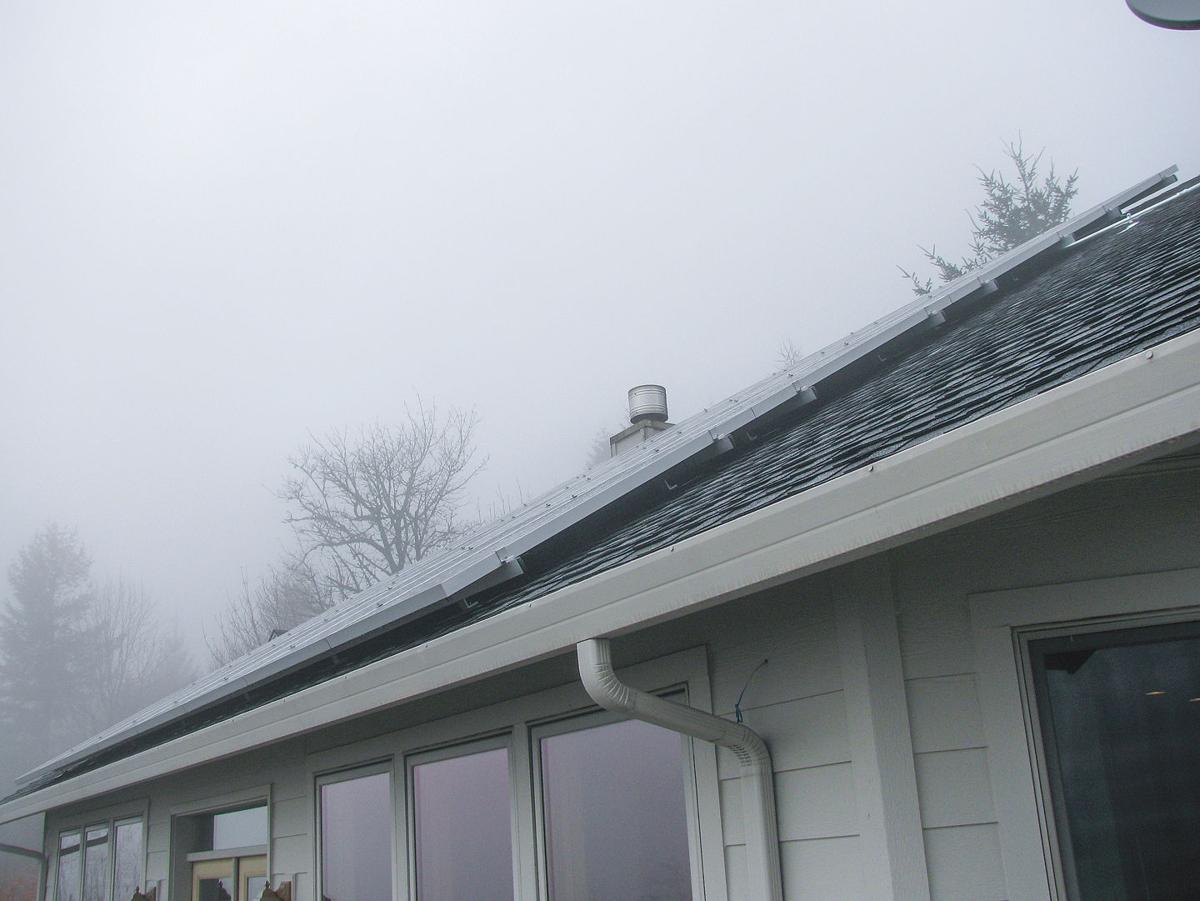 THE BATTLE GROUND COUPLE decided to add solar panels to their home after attending the Home and Garden Idea Fair. As a result, their utility bills are significantly lower than those of their neighbors.

JOHN POLOS, of Battle Ground, shows off the 32 solar panels he had installed on the roof of his home in June. The panels, along with a bevy of other energy-efficient installations such as a geothermal heat pump, have reduced Polos’ energy bills by 70 percent.

THE BATTLE GROUND COUPLE decided to add solar panels to their home after attending the Home and Garden Idea Fair. As a result, their utility bills are significantly lower than those of their neighbors.

When John and Marla Polos built their 3,200-square-foot home in Battle Ground’s northeast hills 10 years ago, the couple wanted to be as energy efficient as possible.

A geothermal heat pump, polyfoam insulation, small wood stove, and double-paned south-facing windows insured that the Polos’ home would be warm in the winter and cool in the summer while still conserving energy.

Sure, the polyfoam insulation was more expensive than fiberglass insulation, but the benefits outweighed the cost for the longtime Battle Ground couple.

“It costs about 30 to 40 percent more than fiberglass,” John Polos says of the polyfoam insulation. “But it sets up hard, so there are no drafts. And, it’s fireproof and made of soy, so it’s not toxic.”

“We wanted to be as efficient as possible when we built the house,” Marla Polos says.

That foresight has paid off, John Polos adds. For the past 10 years, the couple’s energy bills have been about 30 percent lower than their neighbors’ bills.

After 30 years working as an engineer for the Bonneville Power Administration, John knew the ins and outs of energy production and consumption. He also knew that electricity bills were only going to get more expensive. And, in the back of his mind, he mulled over the possibility of installing solar panels on top of his home to save even more money on his monthly power bill.

“I had considered solar, but the cost was too high,” John says.

The fair is where Polos met Mike Muchmore, a senior estimator with SunBridge Solar, a Portland-based company that installs solar systems on homes up and down the west coast. Muchmore’s knowledge about solar panels convinced Polos that this was something to consider. Then Polos talked to Bart Hansen, a Clark Public Utilities manager who knew about the various federal and state incentive programs that help shoulder the cost of installing solar systems on individual homes.

“Those two guys, along with Joe Sarkkinen at Geothermal Heat Pumps in Battle Ground, who helped me with the geothermal heat exchange, were invaluable,” Polos says. “They convinced me.”

A couple months after attending the Home & Garden Idea Fair, the Polos home had a new addition — 32 solar panels, each weighing in around 5-feet by 3-and-one-half-feet in size, atop the roof. With installation, the solar system set the Polos family back about $44,000.

That’s a big chunk of change for a family just looking to save money on their electricity bill, but Polos explains that the federal and state incentive programs make up for it.

“The incentives pay for the cost of the solar panels and installation,” Polos says. “And now my (utility) bills are 70 percent lower.”

Here’s how the incentives pay the Polos family back for their $44,000 investment in solar energy: During the first year, the federal government offers a tax rebate totalling 30 percent of the cost of the solar system. For Polos, that rebate knocked about $13,000 off of the $44,000 total, leaving $31,000 to go. This is where state incentives come in.

Combined with the federal rebate, and the fact that their power bills are now 70 percent lower than what they would have been without the solar panels, geothermal and other energy-saving additions, the Polos family is coming out ahead financially.

“I don’t know of anyone else in Clark County who has done as much as we’ve done,” Polos says of his home’s energy efficiency measures. “But after I did the solar panels, a couple of my neighbors came to talk to me and now they have solar, too.”

Washington State is known for being an advocate for renewable energy like solar and geothermal power. In fact, it was the second state in the nation to pass a renewable energy standard, requiring utilities that serve more than 25,000 customers to have at least 15 percent renewable energy sources by 2020. The state offers tax abatement for solar manufacturers, green building initiatives, sales tax exemptions for renewable energy equipment, production incentives and many grant and loan programs.

In Clark County, the Clark Public Utilities offers a utility loan program for residential customers who choose to install solar panels on their homes. The low-interest loans finance up to $30,000 in solar systems at 5.25 percent interest for 5 to 7 years, helping residential customers install solar panels without having to front a large chunk of cash at the outset, while assisting the state with its 15 percent renewable energy goal.

“It’s expensive,” Polos says of solar power. “But it pays for itself in six years.”

Want to learn more about solar or geothermal power? Battle Ground resident John Polos says people may call him at (360) 687-3772 and recommends the following businesses for more information: