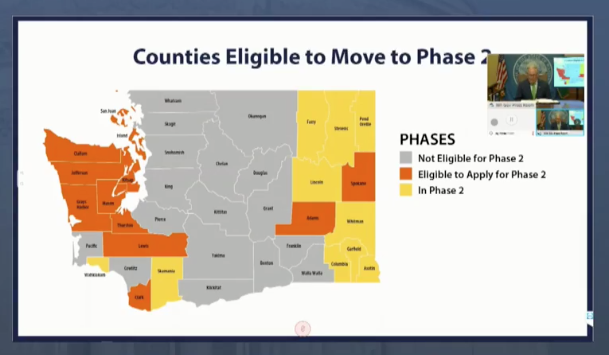 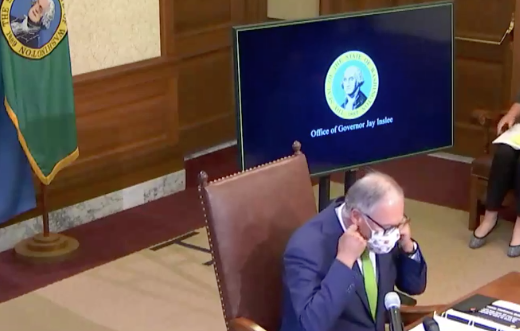 A list of Washington state counties eligible to fast-track reopening of their economies got bigger today as Gov. Jay Inslee announced 10 more — including Clark County — would have a chance for approval under extended criteria.

Clark County Public Health is working on the approval "as quickly as possible," according to a release following the governor's announcement.

During a press conference the governor announced additional counties could apply for a variance allowing for movement into the second phase of “Safe Start Washington” before June 1, the current date planned for a statewide shift after restrictions were put in place to stop the spread of COVID-19. Clark, Lewis and Thurston, Spokane, Adams, Mason, Clallam, Kitsap, Island and San Juan counties make up the list of newly eligible jurisdictions.

The new criteria required counties to have less than 10 new cases per 100,000 of population of residents in a 14-day span, which Inslee said was consistent with guidelines from the Centers for Disease Control and Prevention.

Ten counties had prior received approval for a variance, with most in Eastern Washington but also including Skamania and Wahkiakum counties. Jefferson and Grays Harbor counties were also eligible prior but had not applied for a variance, Inslee said, bringing the total eligible or approved counties to 22, which represented about 30 percent of Washington State’s population.

The second phase of Safe Start Washington allows for a number of restrictions eased, including allowances of outdoor recreation for groups of individuals of five or fewer who do not reside in the same household. The phase also opens up a number of industries, including manufacturing, additional construction phases, in-home services like housecleaning and nannies, hair and nail salons, real estate, restricted retail and restaurants at 50-percent capacity with no bar-area seating and parties no larger than five.

The governor asked that activities remain local, noting worry from some counties opening up about an influx of people coming from outside their boundaries to take advantage of eased restrictions.

Washington State Secretary of Health John Wiesman said the process for additional counties was “essentially the same” as what was required for the first round of applications. He explained that the county’s designated health officer could make the recommendation to the county board of health on whether or not to apply for a variance, which could include all of the allowances or a subset of activities in the Safe Start Washington.

The local board of health can then move forward with their own recommendation to the county commissioners or councilors, who then would make the final decision to accept or deny the recommendation, Wiesman explained.

As part of criteria the health secretary said that local hospitals would also need to be engaged in the process, being required to state they had at least 20-percent surge capacity and a 14-day supply of personal protective equipment (PPE) in the event of an uptick of COVID-19. Hospitals would be required to report their PPE stocks and surge capacity daily, Wiesman said.

Local health departments would be required to report testing capacity in their jurisdictions including access, Wiesman said, as well as abilities to support positive cases after diagnosis and conduct contact tracing to identify potential exposure.

Part of the application must also address the ability to house those confirmed with COVID-19 during self-isolation in the event they are in a household with an immunocompromised person or are experiencing homelessness, he added, which would need to be offered without charge to the individual.

Local health departments would also be required to demonstrate their ability to conduct outbreak investigations, Wiesman added, should it be in a long-term care facility or a workplace.

“This really is a community effort,” Wiesman remarked. The final decision on accepting an application would be at the discretion of his department, he added.

Inslee said that the additional eligibility was good news, but cautioned against complacency in the wake of continued disease response.

“This is really something we ought to feel good about in the State of Washington,” Inslee said about the increase of variances, “the ability of people to be going back to work … going back to restaurants, after this most difficult time of economic anxiety and social distress.”

“We have to still recognize that we’ve made progress, but we are just so far from being out of the woods,” Inslee added. He mentioned the recent loss of Annie Glenn, wife of astronaut and U.S. Senator John Glenn, who was the first person he knew personally who died after a COVID-19 diagnosis.

“The bottom line is we still live in the era of COVID-19,” Inslee remarked.

Following Inslee’s announcement, Clark County Public Health sent out a release noting the department was looking for “full implementation” of the second phase.

According to the release, Public Health was working “as quickly as possible” to submit a variance request, noting the county Board of Health would need to approve it prior to submission. For Clark County the Board of Health comprises Clark County Council, meaning the same individuals would would approve the final submittal.

The department stated it was still reviewing what the state requested in the application, “but (the department) believes Clark County can meet the necessary criteria.

Clark County Public Health noted that until the Washington State Department of Health approved a variance, the county remained in the first phase of Safe Start Washington, and residents and businesses should continue adhering to those guidelines for the time being.

The governor also announced the first round of grants to just more than 500 recipient small businesses across the state. The grants of up to $10,000 per business were part of $10 million in relief that could be used for rent, utilities, inventory or other non-payroll operating expenses, Inslee said.

“For many of them, we hope this is a bridge to get them on the other side of this crisis,” Inslee said.

“We know this isn’t enough,” Brown said about the grants, adding her department would be continuing to find additional resources at the federal and state levels, local governments and private philanthropy.