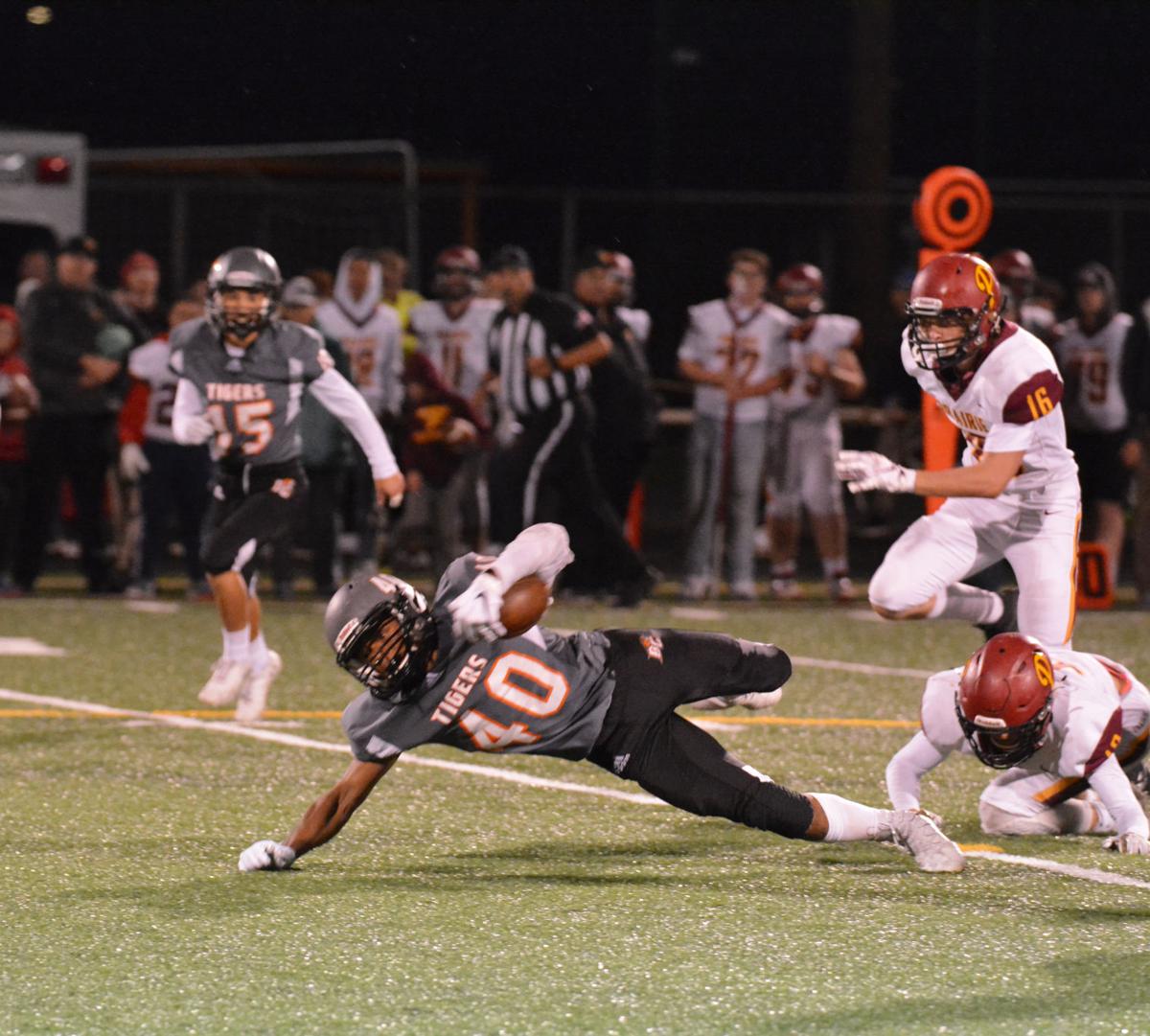 Battle Ground Tiger Steven Hancock falls with the ball on a play on Friday night at District Stadium. 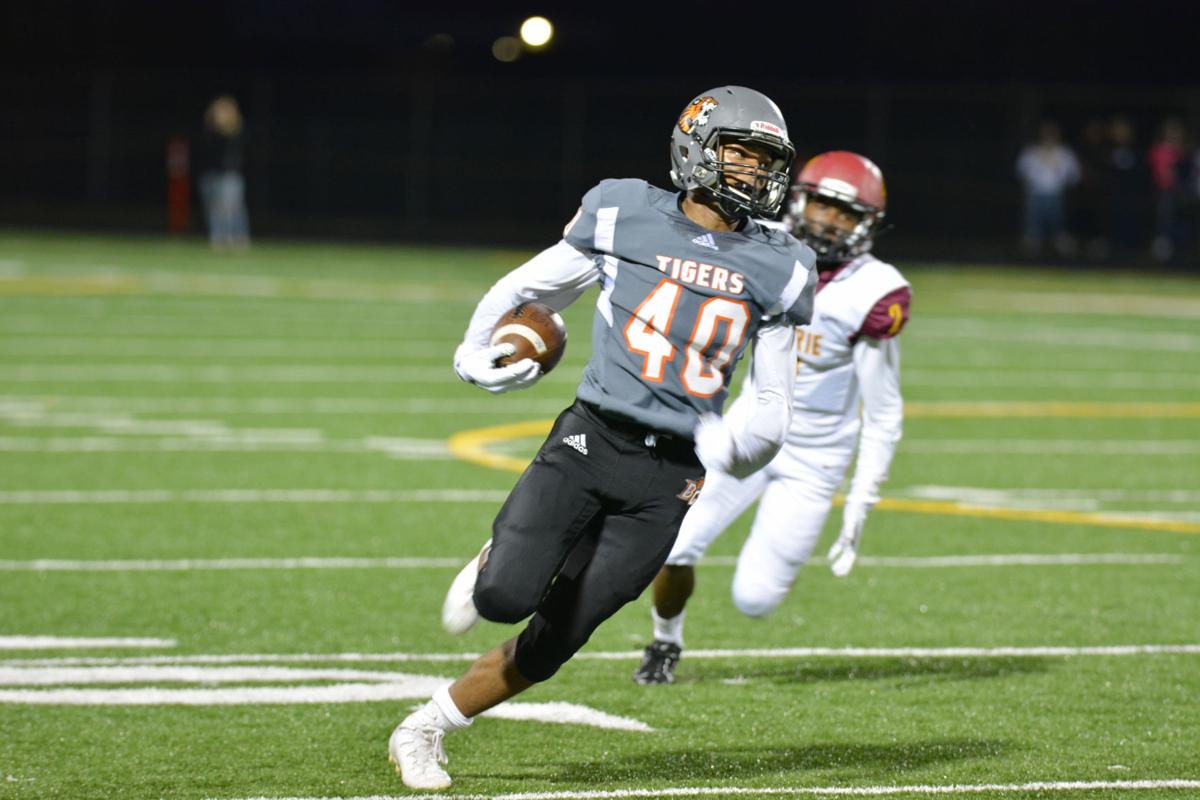 Tiger senior Steven Hancock runs with the ball moments before being taken down during the rivalry game between Prairie and Battle Ground on Friday, Sept. 27. 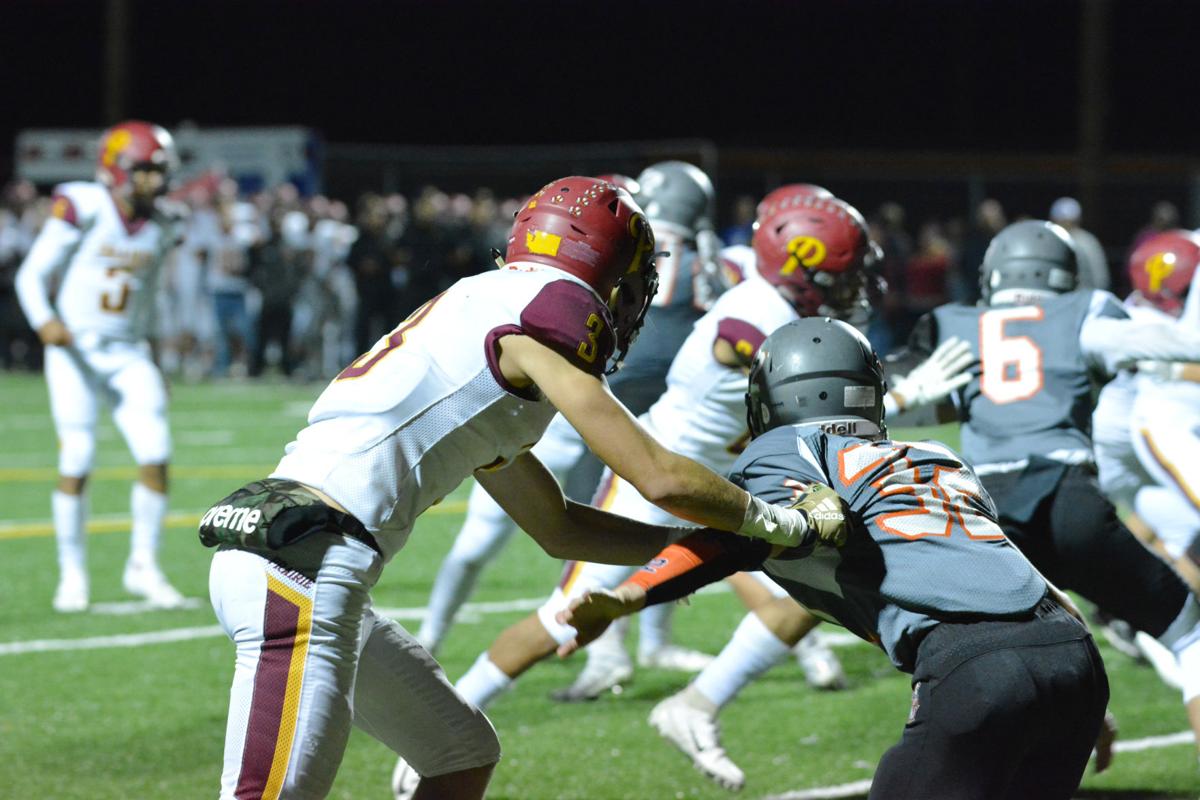 Falcon junior Ian Davis pulls down Battle Ground junior Josh Ferguson during a play in a Sept. 27 game between the Falcons and the Tigers. 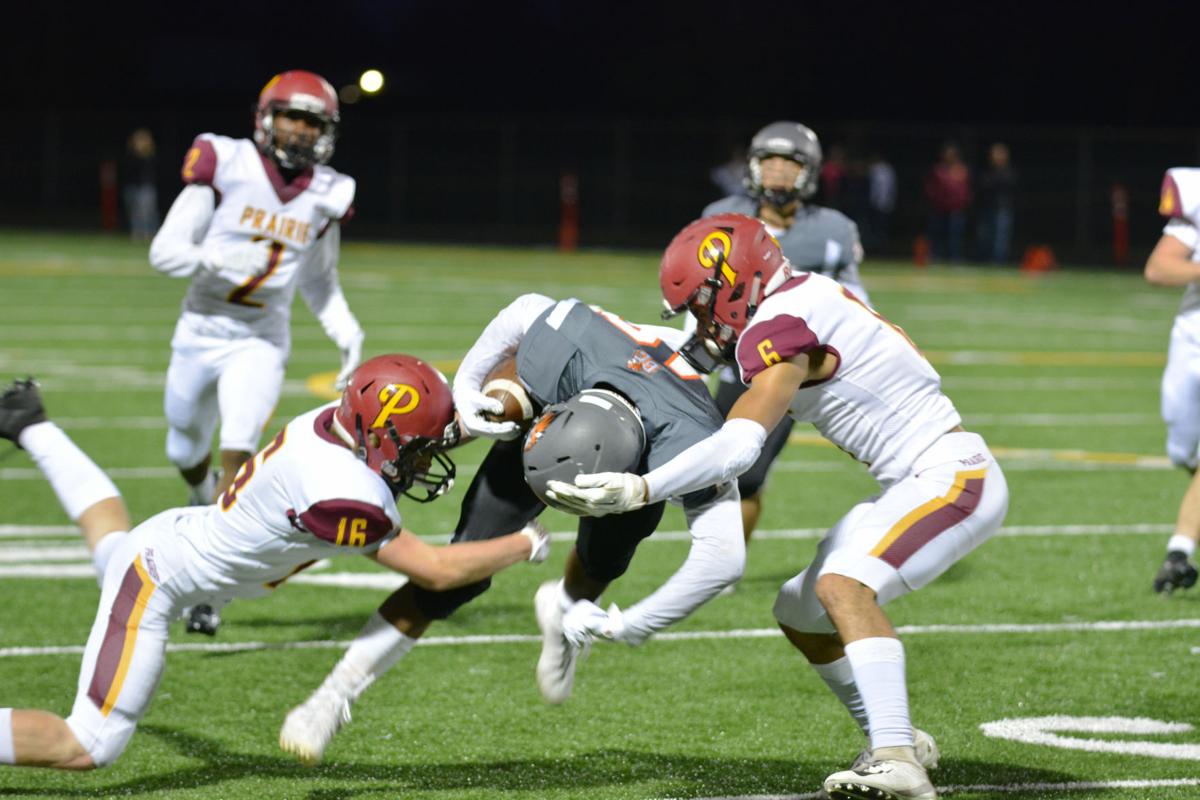 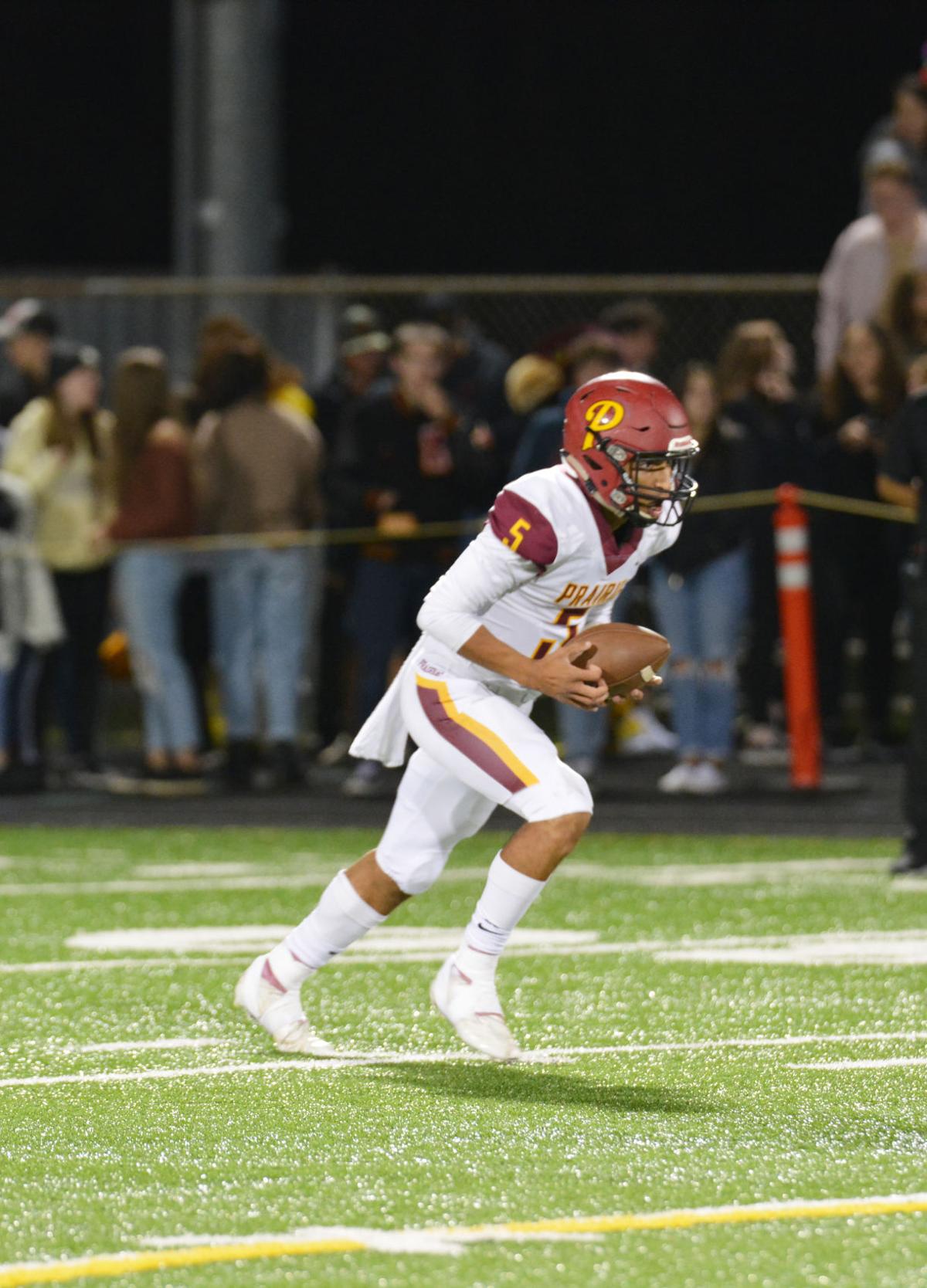 Senior quarterback A.J. Dixson calls out to his team after receiving the ball in a game against the Battle Ground Tigers at District Stadium. 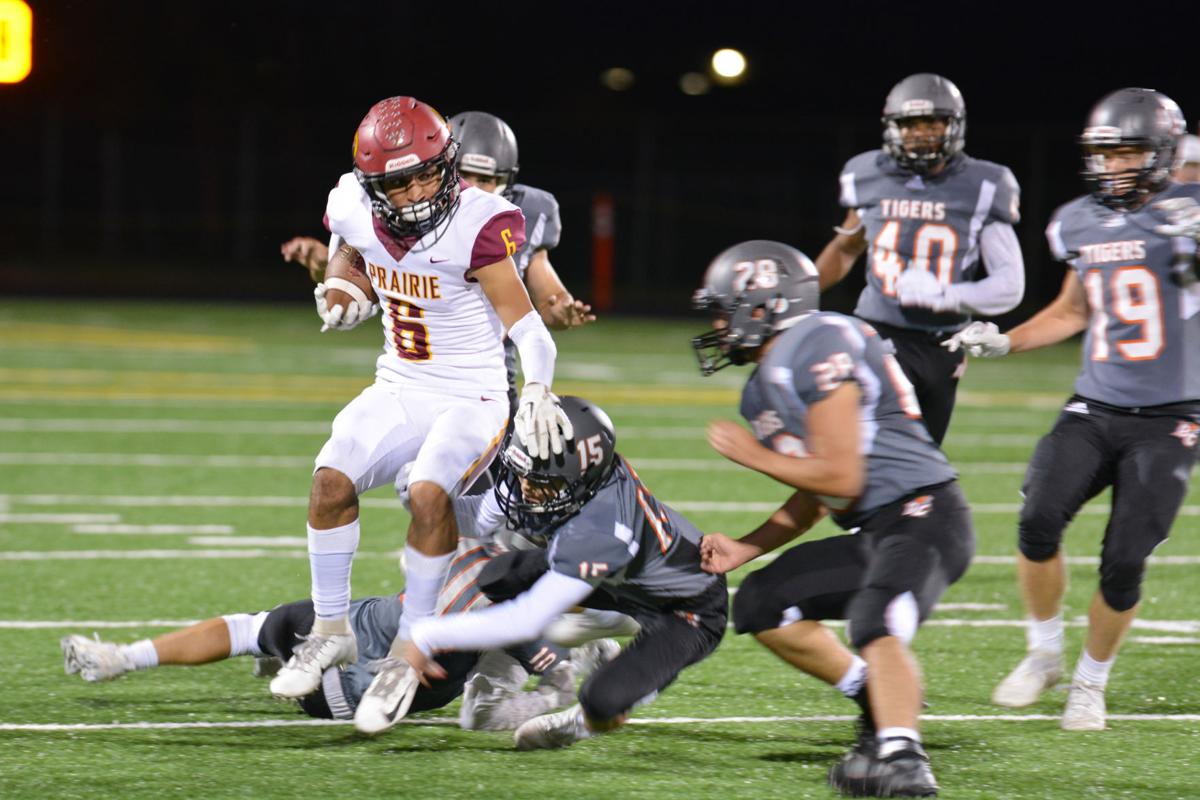 The Prairie High School Falcons won the 503 rivalry against the Battle Ground Tigers 38-6. The Falcons soared to 4-0 with the win, a streak that hasn’t been seen at the school since 1985.

“We’re just trying to get better each day, that’s the key” Falcon head coach Mike Peck said about the record. “The kids have been working their butt off and it shows on the field.”

A slight rain at the start of the game didn’t stop Prairie from showing the Tigers they were there to win as senior wide receiver Zeke Dixson scored on a pass from his brother A.J. within the first minute of the game.

“What was going through my head was, that was pretty open and I think we should go back to that,” Zeke Dixson said about the play. He later mentioned that the blocking from his team was “great” and kept the goal in range.

Following the first score, Prairie went for two on the touchdown conversion making it 8-0 Falcons, and keeping in line with coach Peck’s strategy of “always going for two.”

“The opportunities are there and we just need to do a better job of executing,” Peck said about the idea of going for two. “It’s something we are definitely going to stick with.”

Prairie’s scoring start didn’t stop there, with Zeke’s brother, A.J. Dixson, scoring again in the first quarter bringing the score to 14-0 Falcons after the two point conversion was no good. With just under six minutes left in the first, Falcon senior A.J. Dixson scored again off a quarterback run into the end zone. The conversion was no good and brought the score to 20-0 at the end of the quarter.

The second quarter started off slower with no scores happening in the first seven minutes. However, the Falcons held steady on defense and brought the score to 26-0 with a touchdown scored by running back Justin Shelby with just over four minutes left in the half.

“We have been starting fast all year,” coach Peck said about the Falcons. “We were able to do that again today and it got that momentum moving for us in the right direction.”

Prairie kept the momentum going after halftime with running back Justin Shelby running the ball into the endzone in the first four minutes of play bringing Prairie's score to 32 after a no-good two-point conversion. With Battle Ground unable to bring it into the red zone, Prairie scored their final touchdown of the game with just over seven minutes left in the third quarter. Prairie was up 38-0 at the start of the fourth.

The Tigers played hard in the fourth quarter and didn’t allow the Falcons a rivalry shutout with Battle Ground senior Ryan Potes scoring a touchdown on a six-yard run on a fourth down. After a no good two point conversion, the score would rest at 38-6.

“Bottom line is, we need to play a full football game, we weren’t there,” Battle Ground Head Coach Mike Kesler said, later elaborating the fact that the Tigers need to work on their focus. “They let some calls get into their head, they lost focus of what they were supposed to do.”

As for the Falcons, head coach Peck said the team needs to work on “cleaning up their penalties” and plans to show the team of players that “hard work equals success” throughout the rest of the season. The undefeated Falcons play Kelso at home next Friday. Battle Ground heads to Skyview high school. Both games kick off at 7 p.m.

Other scores from around north county

The Wildcats head to 4-0 with the win. They play at King’s Way Christian next friday.

The Spuds are 2-2 with this win. They play at Washougal High School next week.

Beavers go to 1-3 overall and 1-1 in league with this win. They play Hockinson at home Friday, Oct. 4.

Defending 2A state champion Hawks are 3-1. They head to Woodland High School next week.