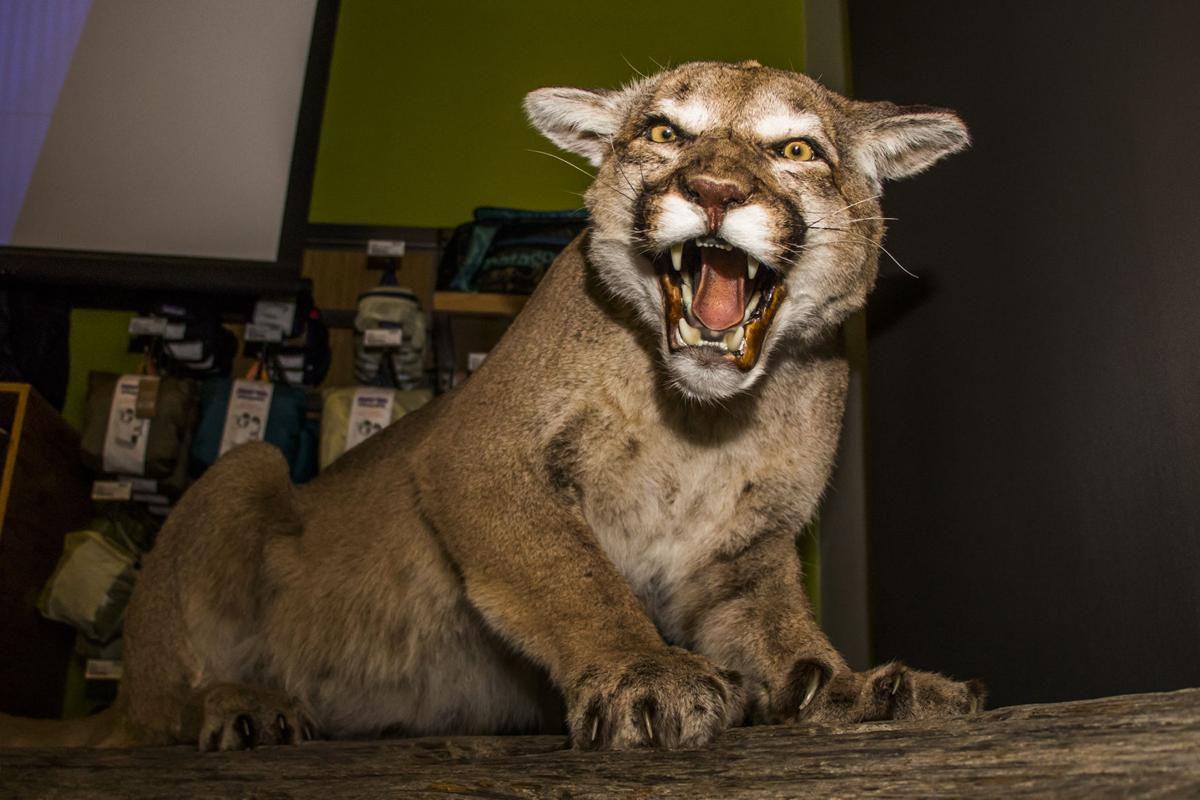 A stuffed cougar is seen on display at REI in Olympia on Tuesday, April 23. 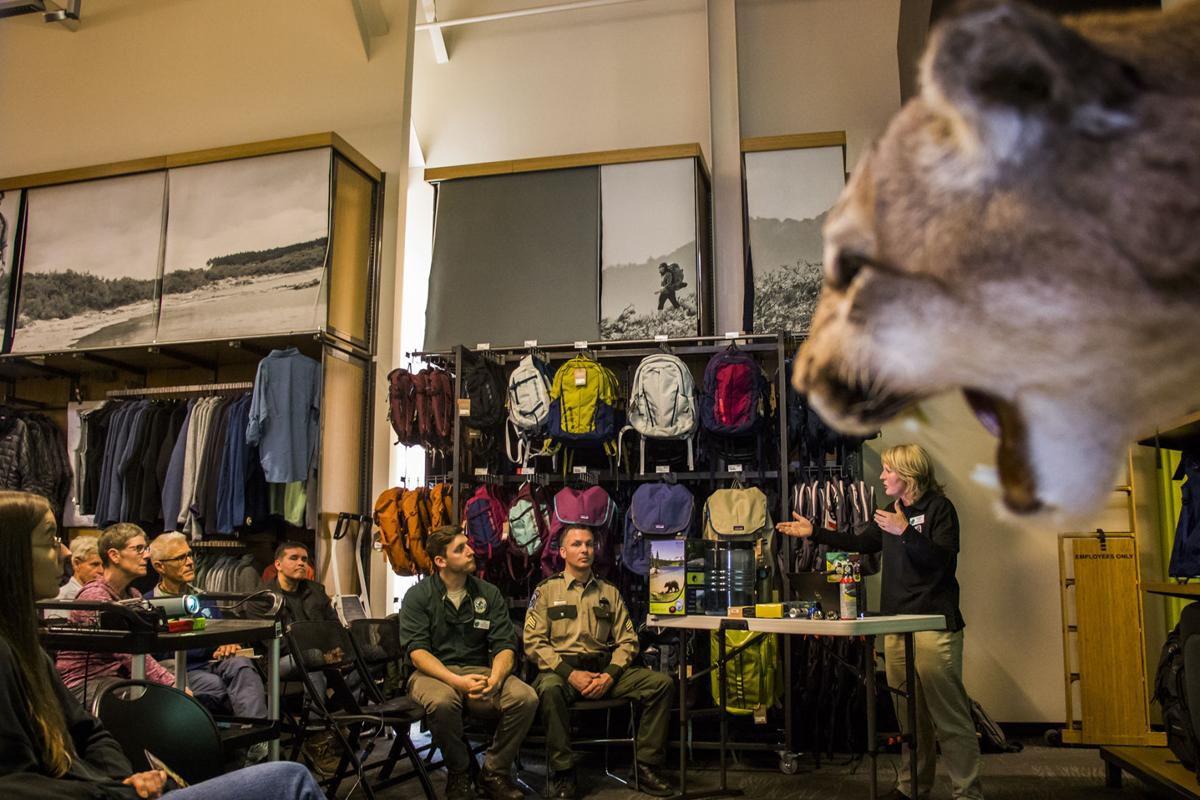 Michelle Tirhi, a district wildlife biologist with the Washington Department of Fish and Wildlife, talks with guests during a presentation at REI in Olympia on Tuesday, April 23. 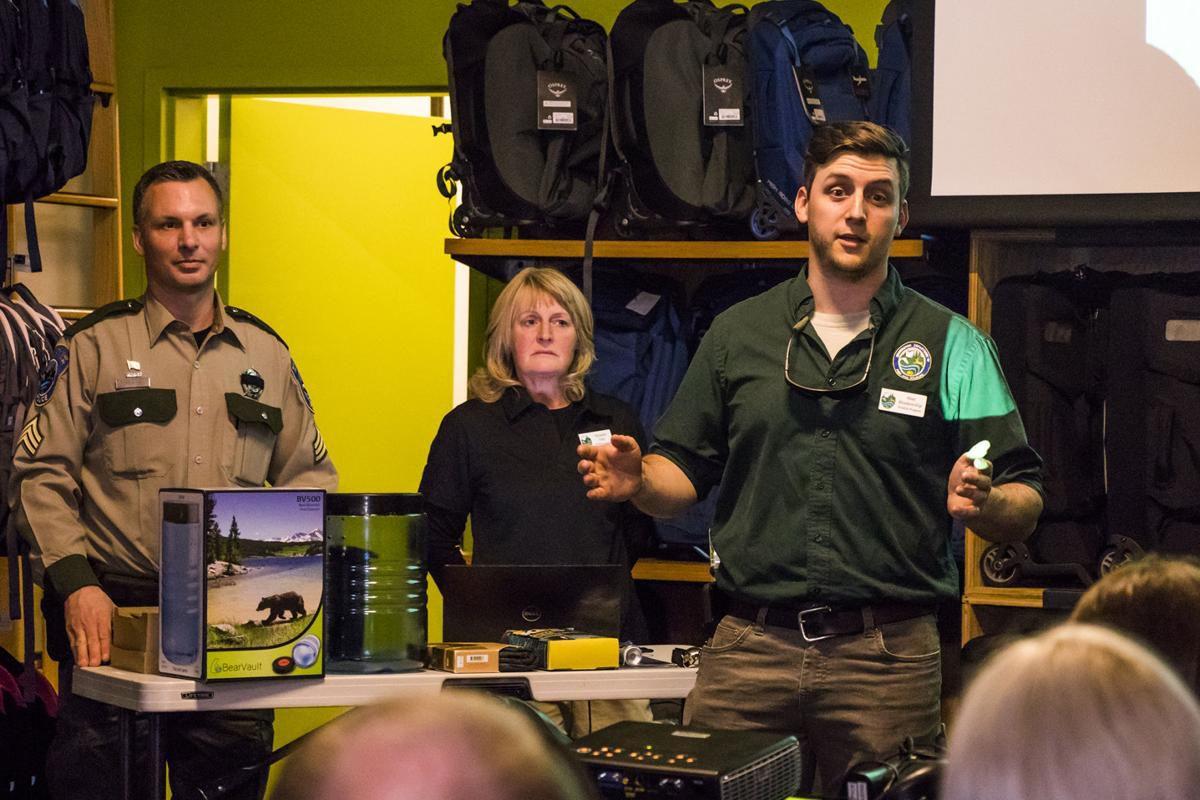 Left to right: Chris Zuchlewski, Michelle Tirhi and Matt Blankenship, all with the Washington Department of Fish and Wildlife give a presentation at REI in Olympia on Tuesday, April 23.

Most Washington residents will never see a cougar in the wild, but doesn’t mean one hasn’t spotted you.

“All of you who have spent time in our woods, you’ve had cougar checking you out, you just don’t know it,” said Michelle Tirhi, district wildlife biologist with the Washington Department of Fish and Wildlife. “They very often come close to humans on trails, but they’re always just off sight. Very seldom do you see them or have an encounter with them.”

That’s not a reason to worry, said Tirhi and a pair of her colleagues, who addressed about 50 residents during a presentation April 23 at REI in Olympia. While humans share much of the state with cougars — which encompass about 60 percent of Washington’s land — they rarely pose a threat to people.

“Cougar attacks on people are extremely rare,” said Matt Blankenship, a conflict specialist with the agency. “You’re about 1,000 times more likely to be struck by lightning than to be attacked by a cougar.”

The WDFW trio offered information about cougar behavior and habitat, as well as advice for what to do in the rare event of a cougar encounter and tips for keeping livestock safe.

Studies show there are about 2,000 adult cougars in Washington, a figure that does not include tribal lands or national parks. Male cougars have a home range that can span 100 to 200 square miles, a territory that will not overlap with another male. Because of this solitary behavior and need for space, the amount of animals the land can support is limited, and cougars self-regulate their populations to ensure each animal has enough territory.

Every 7 to 12 days, a cougar will kill a large animal, such as a deer, elk or mountain goat, eating some of the meat and caching the rest for later. If you come across a recently killed animal partially covered with debris, it could be a cougar cache and a sign to leave the area.

Most human and cougar interactions occur in what’s known as urban-wildland interfaces, where undeveloped terrain meets populated areas. Many of those encounters are with young, sub-adult male cougars, which often roam long distances seeking them to establish their own territory. That search occasionally leads them through areas populated by humans.

“When they are coming through, they’re just moving through and moving to different locations,” Blankenship said.

Those in areas with occasional cougar sightings, especially rural locations, should avoid feeding wildlife, as providing food for animals like deer and raccoons means you’ve brought cougar prey to your doorstep. Meanwhile, dense vegetation provides cover for cougars, which are ambush hunters, so trimming it away from your house is also advised.

Homeowners should seal the spaces beneath porches and houses which could also provide shelter for cougars. Motion-activated lights, as well as fencing, can also provide protection.

If you suspect a cougar has killed some of your livestock, WDFW encourages you to report it to the agency as soon as possible, treating it like a crime scene, so biologists can determine information about the attack.

When traveling in the backcountry, it’s helpful to travel in groups and announce your presence with noise. Steer clear of dead animals and don’t let children stray far away. Large dogs can be a helpful deterrent for cougars, but small dogs may be seen as prey and lead cougars back to you.

If you see a cougar, the most important advice may be the hardest to follow.

“Do not run away. That is the biggest thing I can tell you,” Blankenship said. “When an animal runs from a cougar, that is a prey behavior and they will give chase.”

“Every desire in me was to run,” she said, describing a cougar encounter she’d had. “My body was saying run. You have to fight that.”

Instead, by backing away slowly, she was able to remain safe.

If you can quell the urge to run, make yourself as large as possible, speak firmly and try not to corner the animal — leave it an escape route. If it appears aggressive, shout, wave your arms or throw rocks.

In the extremely rare event of an attack, fight back as aggressively as you can, using sticks, rocks or your bare hands.

“There’s no rules in the fight game when you’re fighting a cougar,” Blankenship said. “If you’re aggressive enough, the cougar will realize it’s made a mistake.”

Bear spray, he noted, is much more effective at stopping a cougar than a firearm. When camping, it’s important to not leave stray food out, pets unleashed or children unattended.

Despite all the warnings, cougar attacks are still extremely rare, and the animals are extremely skittish of humans.

“It’s not like a grizzly bear, where if you come across a grizzly bear with its cubs, its instinct is to attack,” Blankenship said.

While cougars are generally nothing to be feared, the WDFW officials acknowledged they can make people nervous, especially as technology like remote trail cameras and social media makes it much more common to hear about sightings.

“We have a healthy cougar population in the state and a growing human population,” Tirhi said. “That’s a challenge for our agency.”