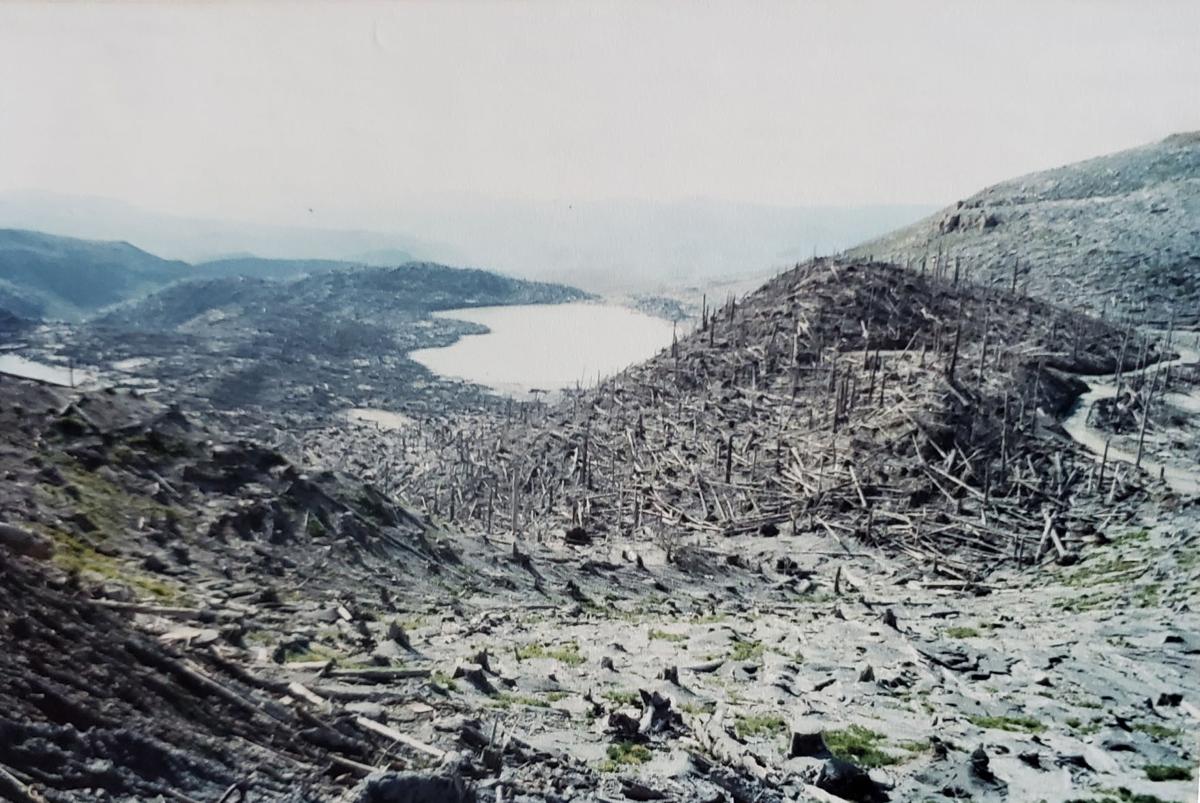 The landscape around Mount St. Helens was reduced to rubble following the eruption the morning of May 18, 1980. 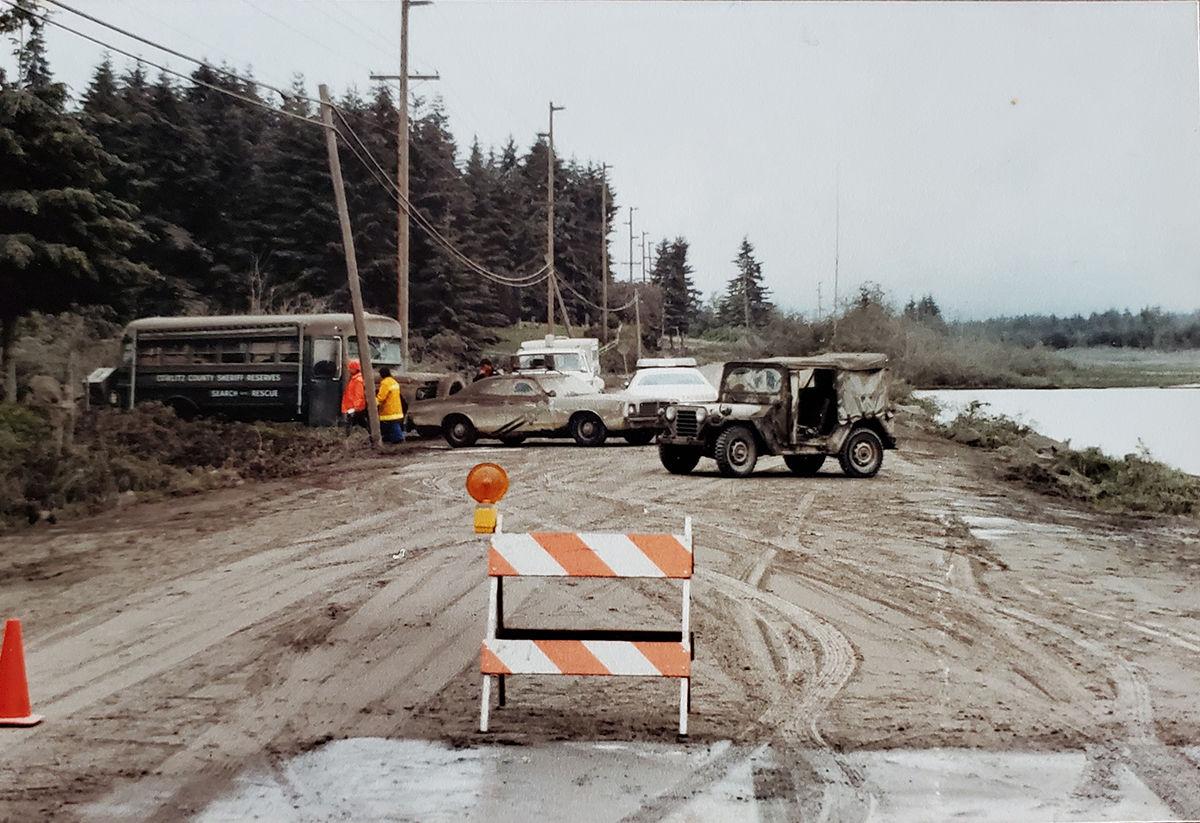 A police roadblock set up at the intersection of George Taylor Road and Route 504, with Silver Lake to the right. The tri-county search and rescue bus can be seen to the left.

On the blue sky morning of Sunday, May 18, 1980, a convoy of property owners was getting ready to head up to the mountain to retrieve their belongings from cabins in the danger zone.

The governor, bowing to calls of “reopen now!” (and threats of storming the barricades) had agreed to let a convoy head up to the Red Zone of the mountain.

Just before they had a chance drive up the winding roads to the mountain, it erupted. A freak of timing saved them from themselves.

Jeff Renner, a longtime science reporter and meteorologist at KING 5 television, spoke recently about the eruption’s 40th anniversary in an online talk sponsored by the Mount St. Helens Institute.

He and Melanie Holmes, author of the David Johnston biography “A Hero on Mount St. Helens,” said that scientists in 1980 couldn’t predict the exact day the volcano might blow. They could only tell policy-makers what they were seeing and what could happen.

It was up to policy-makers — and citizens — to listen.

Many citizens were tired of the warnings and the waiting.

“There was an increasing agitation to allow them to go in,” Renner said. The first tour went up on Saturday, May 17. Renner joined that convoy of 50 vehicles as a reporter, and remembers sipping a soda on the shores of Spirit Lake — an area that within 24 hours would be covered with hundreds of feet of debris.

“If the mountain had erupted an hour, an hour and a half later,” Renner said, “instead of 57 dead, you probably would have had triple, maybe even 10 times that many people who had died, because you would have had people right at the foot of the volcano and moving in.”

Ditto if the mountain had erupted 24 hours later on a Monday, when loggers would have been at work all over the area.

The same dynamic is playing out again now during the coronavirus lockdown, Renner said, with calls for property rights and freedom of movement running up against real but uncertain risks from COVID-19. The protesters of 2020 would find common cause with the unhappy citizens of 1980.

Like today, there were also severe economic consequences from the safety lockdown in 1980. Lodges and camps were unable to welcome tourists. Logging, a bedrock industry, was shut down.

And now, as then, if predictions made by researchers didn’t turn out to be exactly correct, folks started losing faith and following their hopes rather than the best (if imperfect) science.

The mountain had been eruptive and shaking with earthquakes in March of 1980, but had gone quiet in the weeks before the governor decided to reopen.

Today, a flattened curve of infections due to the stay-home order seems to suggest that the threat from the virus is easing. The worst-case scenario we pondered a few months ago hasn’t come about (because we heeded the scientists and stayed home), but some people are saying scientists got it wrong, rather than saying policy-makers got it right by acting to head off that nightmare scenario.

In both cases, as the immediate threat seems to subside, people can lose sight of the enduring long-term danger.

In 1980, the quietude of Mount St. Helens ended with a deadly bang. Scientists knew it was a possibility, but couldn’t predict exactly when or how it would blow.

Today, the novel coronavirus is as infectious as ever, but as in 1980, people’s weariness with waiting can lead them to discount the warnings.

In 1980, crusty ol’ Harry Truman famously shook his fist and refused to leave his beloved Spirit Lake camp. He was a media darling and pop culture hero, inspiring a song and letters of praise. They never found his body after his mountain blew.

I thought of Harry this morning when I read about a New York barber who defied the lockdown order and continued cutting hair. He just tested positive for COVID-19. While the odds are that he probably won’t die (although, depending on his age, he could be         flirting with real danger), there are countless customers that he likely infected during the days or weeks he was contagious. According to the latest figures, for every 14 New Yorkers who test positive for COVID-19, one will die.

Renner, in his talk, brings up longer-term dangers, like global climate change (which leads to increased risk of infection with zoonotic diseases like COVID-19) and antibiotic resistance from overuse in meat production. In those cases, and others, scientists are warning us. But without a smoking mountain or an overflowing morgue, we tend to pay attention to more immediate needs, desires or inconveniences.

As Mount St. Helens illustrated, and as we’re all living through now, there are risks when you push against serious but uncertain dangers of the natural world.

Sometimes you come out OK. But sometimes the mountain blows or the virus overwhelms your lungs — and your town’s hospitals. Scientists can give us their best information, but it’s up to us to hear and have the wisdom to truly listen.

Brian Mittge and his family are spending a lot of time at their Western Washington home these days. Drop him a line at brianmittge@hotmail.com.