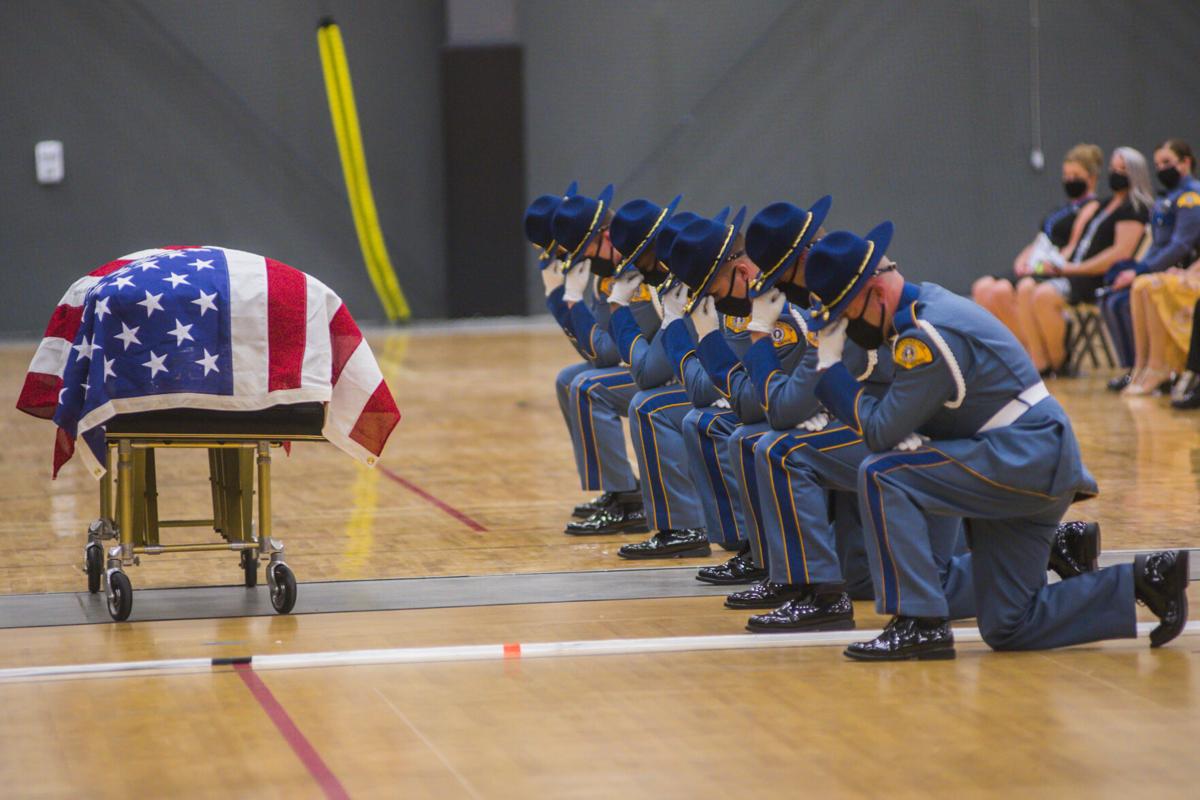 Members of the Washington State Patrol kneel at the casket of Justin R. Schaffer during a service to honor his life Wednesday afternoon in Centralia. 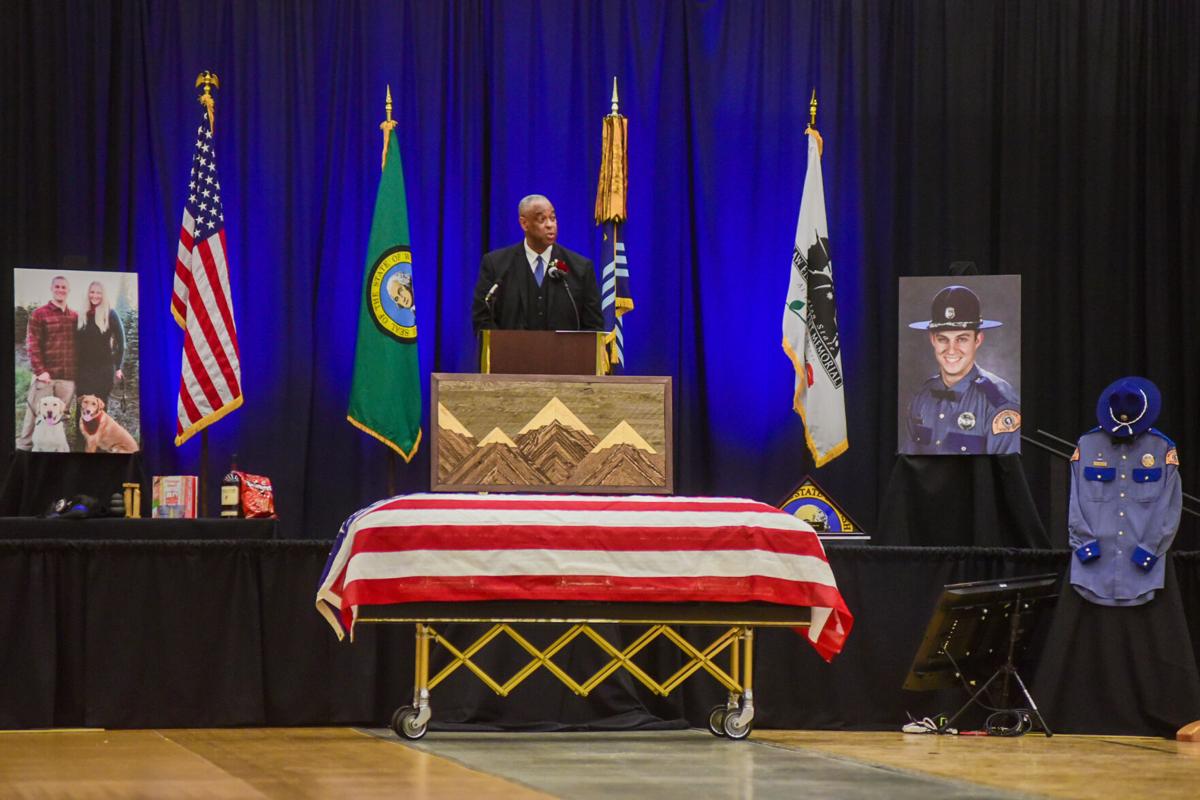 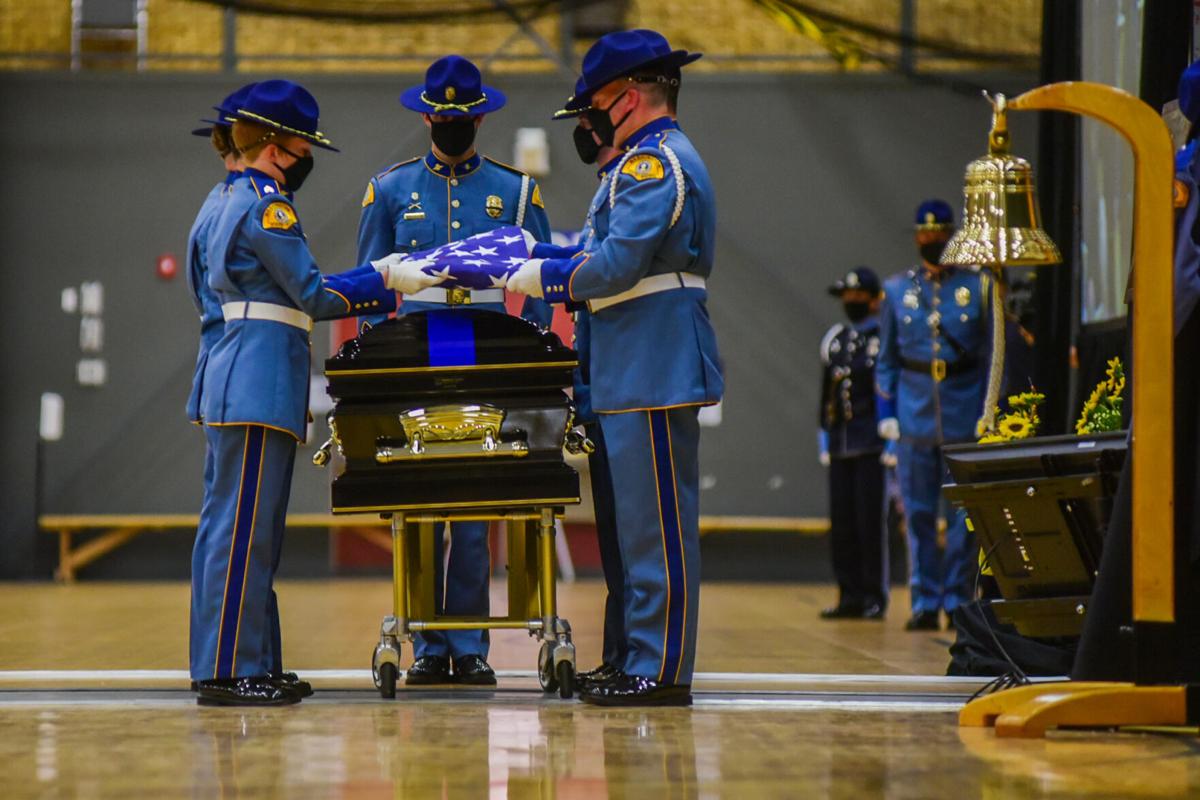 Members of the Washington State Patrol fold a flag over the casket for fallen trooper Justin R. Schaffer Wednesday afternoon in Centralia. 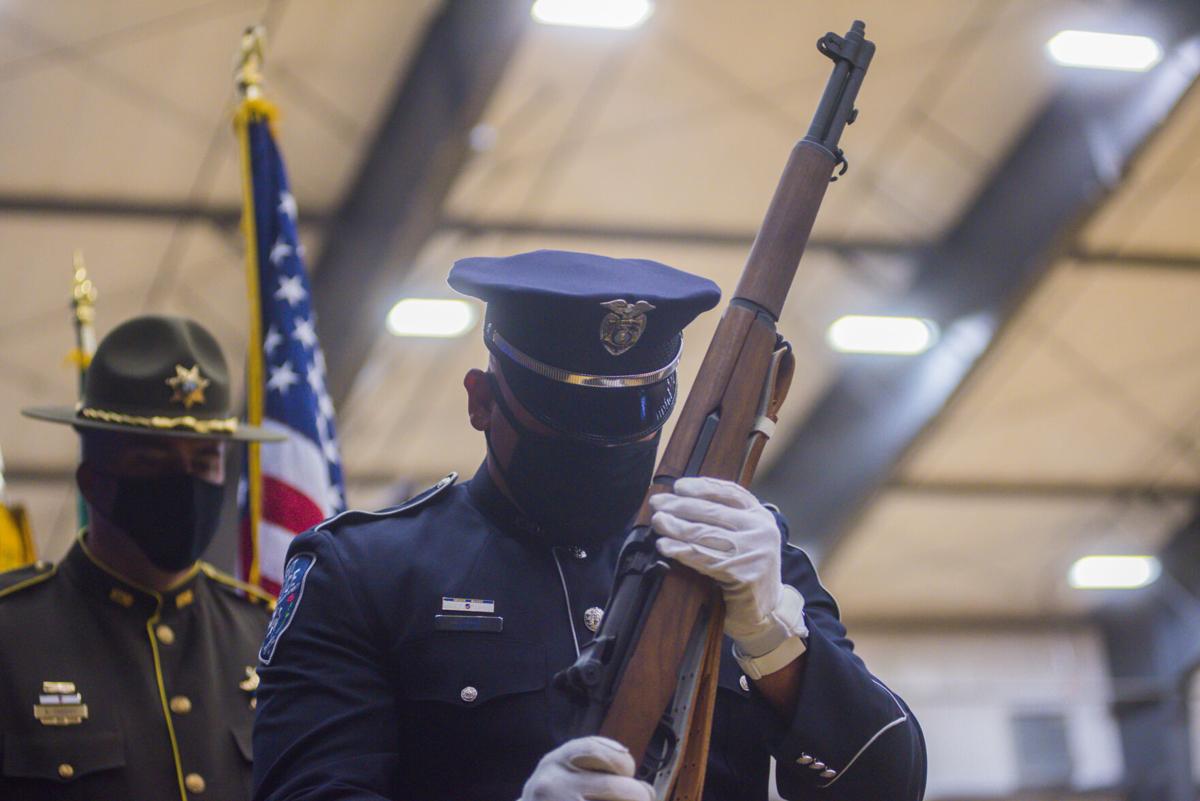 Members of a color guard walk off the stage during a service to honor the life of fallen trooper Justin R. Schaffer Wednesday afternoon in Centralia. 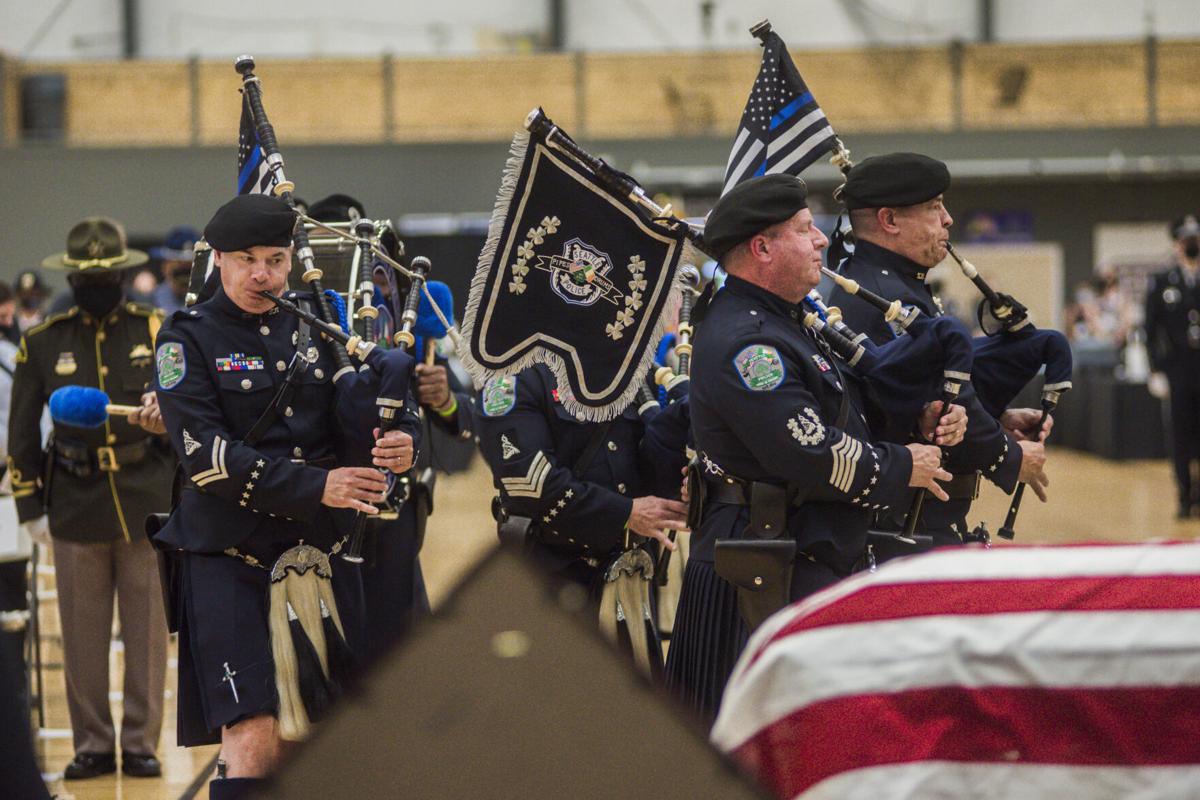 Bagpipers with the Seattle Police Pipes and Drums play during a service to honor fallen trooper Justin R. Schaffer Wednesday afternoon in Centralia. 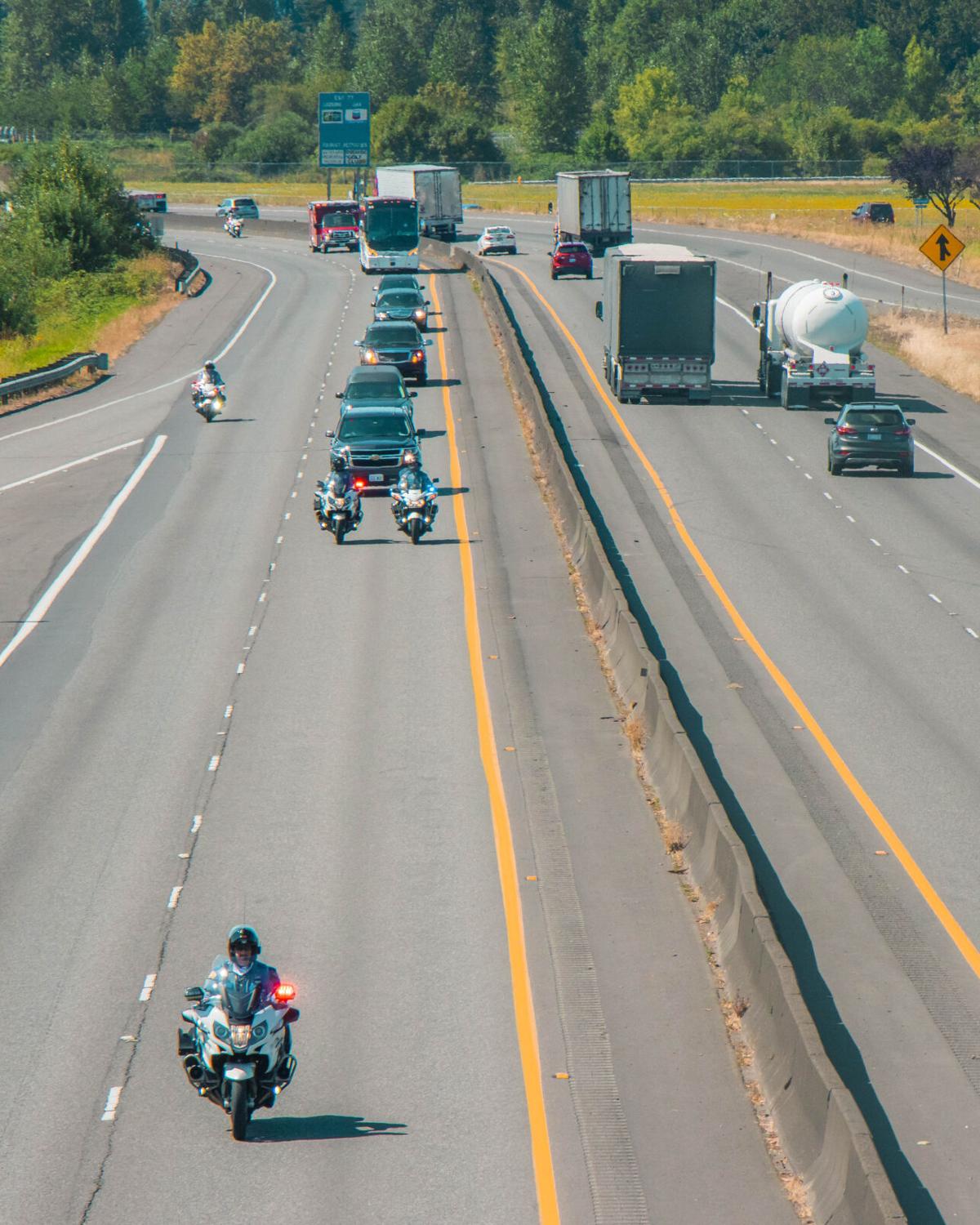 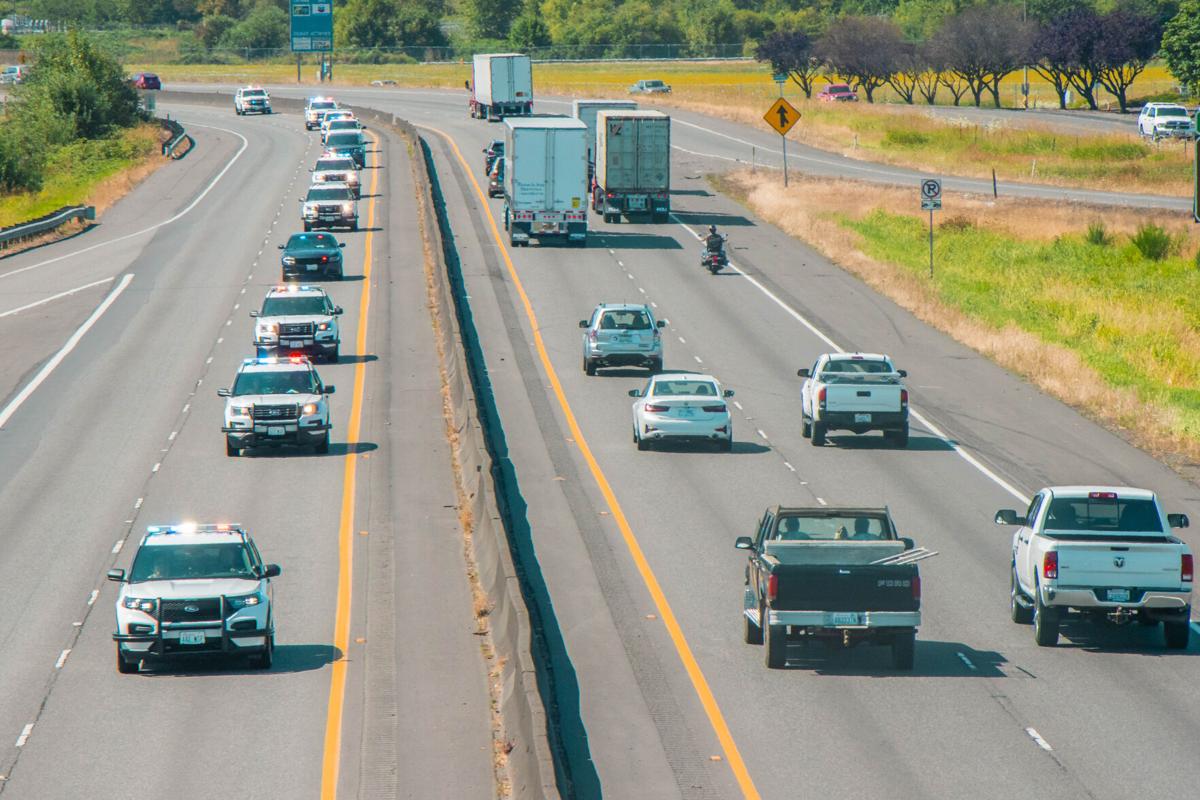 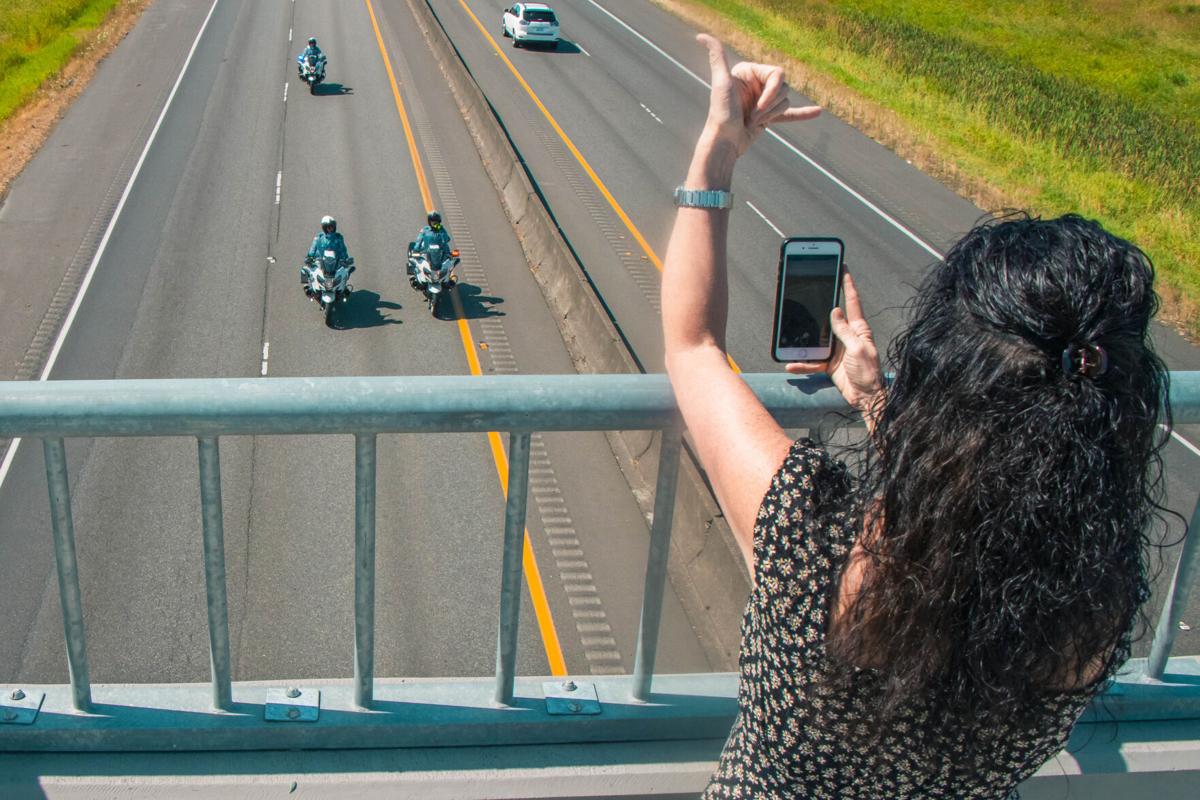 Washington State Patrol honk at onlookers on the Chamber Way overpass during a procession in honor of fallen Trooper Justin R. Schaffer in the northbound lanes of Interstate 5 Wednesday morning in Chehalis. 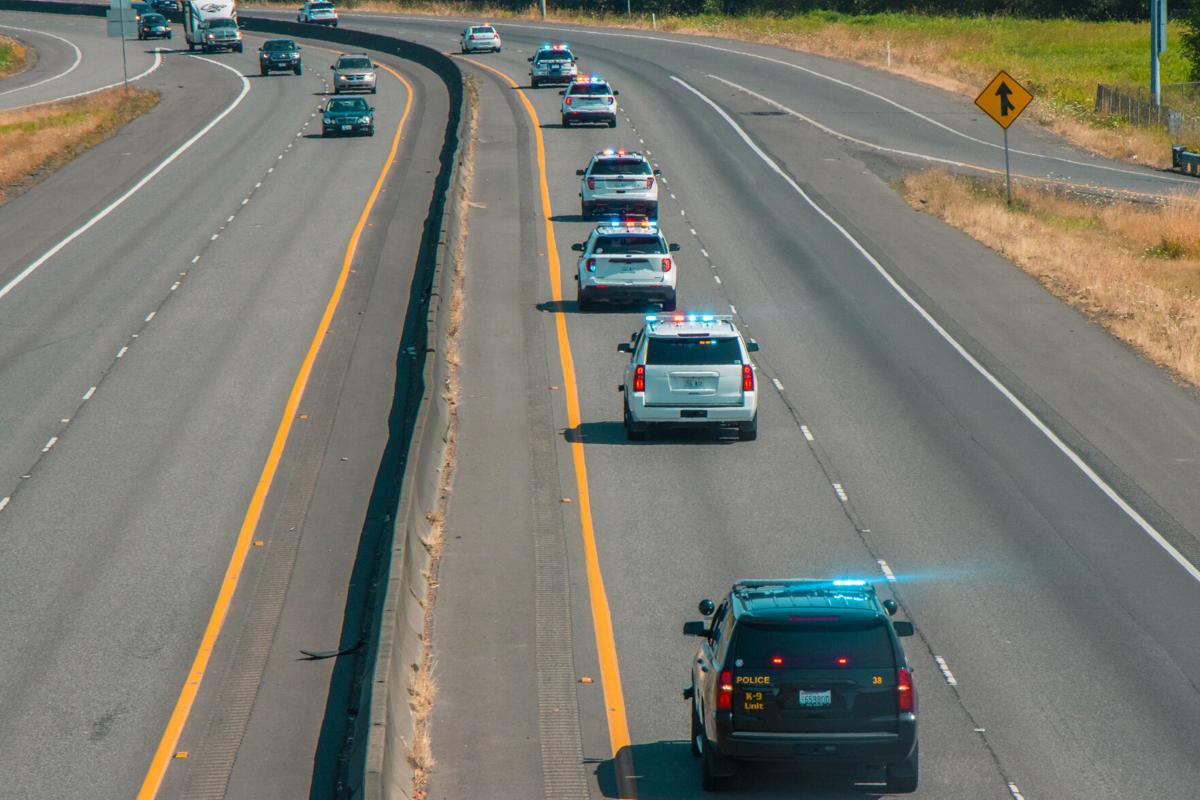 A K-9 Unit follows during a procession in honor of fallen Washington State Trooper Justin R. Schaffer in the northbound lanes of Interstate 5 Wednesday morning in Chehalis. 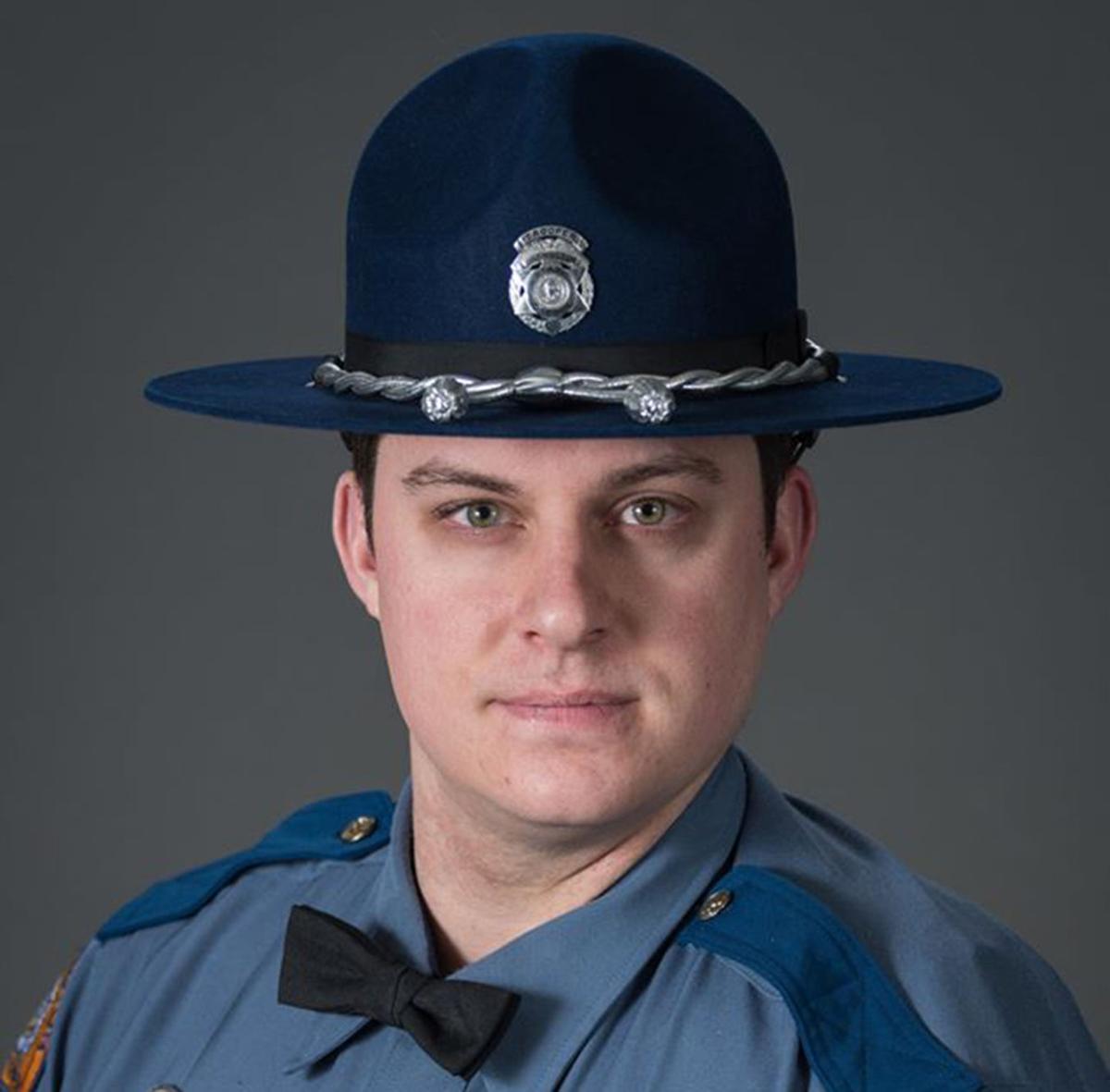 Members of the Washington State Patrol kneel at the casket of Justin R. Schaffer during a service to honor his life Wednesday afternoon in Centralia.

Washington State Patrol honk at onlookers on the Chamber Way overpass during a procession in honor of fallen Trooper Justin R. Schaffer in the northbound lanes of Interstate 5 Wednesday morning in Chehalis.

A K-9 Unit follows during a procession in honor of fallen Washington State Trooper Justin R. Schaffer in the northbound lanes of Interstate 5 Wednesday morning in Chehalis.

Family, friends, fellow law enforcement officers and the Lewis County community as a whole got its opportunity Wednesday to formally pay  respects to a local Washington State Patrol Trooper Justin R. Schaffer, who was killed in the line of duty back in March.

Wednesday’s event was a celebration of the 28-year-old’s life and a formal tribute to his service as a trooper.

“Please understand that even though this memorial service had to be delayed, at no time were you and your family outside of our thoughts and prayers,” said WSP Captain Dan Hall. “We were thinking about you every single day and we worked diligently and kept our commitment to make sure he was honored as a hero as he was.”

On March 24, Schaffer was killed while laying down spike strips on Interstate 5 in an attempt to stop a high-speed chase. The suspect driver was accused of hitting Schaffer deliberately.

Schaffer’s death coincided with the emergence of the COVID-19 as a serious threat to public health and plans for a formal service were put on hold.

That moment — affording Schaffer a proper tribute to his life and service as a law enforcement officer — came Wednesday afternoon.

The memorial service’s attendance was capped due to COVID-19 precautions but was streamed to the public on tvw.org.

Prior to the memorial service, law enforcement officers honored Schaffer with a procession of patrol cars that traveled single file down I-5 from exit 68 to Centralia. A slideshow preceding the service featured pictures of Schaffer, some with family, friends and colleagues.

As the service began, law enforcement officers flanked each side of the center aisle holding a salute as Schaffer’s loved ones walked down toward their seats at the front of the stage.

After the presentation of the color guard and singing of the national anthem, a good deal of time was carved out to share stories.

Ron Ryan, a family friend, shared anecdotes of Schaffer’s boyhood in Colorado, silly antics that Schaffer commonly found himself in which highlighted his outgoing spirit, the admiration he garnered from his colleagues and ones that demonstrated a careful and loving man.

Schaffer was born in Colorado but his family eventually moved to Lewis County, where he graduated from Adna High School and then attended Centralia College where he received a degree in criminal justice.

He is survived by his wife, Sandra, his mother, Sheila, his father, Glenn, who is the chief of police in Chehalis, his brother, Brandon, and his K-9 partner, Frankie.

“(Schaffer) was blessed to be married to a loving wife who supported his life and career. Thank you so much,” WSP Chief John R. Batiste said to Sandra Schaffer. “Thank you for sharing the love of your life with all of us. We know you miss him dearly. Speaking for the state of Washington and all that knew and loved Justin, we will always be here for you.”

Schaffer served with the WSP for seven years, starting in 2013 as a trooper cadet. After he had received his training and became a drug recognition expert as well as a certified K9 handler, he was transferred to Chehalis in 2018.

“In his last moments on the earth, he was wearing the uniform of the Washington State Patrol,” Batiste said in prepared remarks. “We must pause and reflect on the character of each of the men and women we have lost over the years. Like Justin, they each served as one of the state’s guardians and each day of their work, they walked into unknown dangers with well-known courage. We will never forget him. Never.”

After the ceremony, the state patrol shared the following statement from the Schaffer family:

“The overwhelming outpouring of support in the days that followed Justin’s death by the community where he spent his formative years and served as a Washington State Patrol (WSP) Trooper shows the true impact of his life.

Over the past four months, our family has been the grateful recipients of countless cards, offerings of food, flowers and mementos. Our hearts burst with pride as we witnessed our community members come together and form their own parade honoring Justin and extending unending support to our family.

Within that community, we would also like to thank the emergency responders who have stayed vigilantly at our side from the very beginning: from rendering aid to Justin and providing initial support to our family, as well as to those who stepped in to relieve Justin’s grieving colleagues in their time of need.

We consider ourselves honored and are grateful to live amongst such selfless, compassionate and kind individuals.

Being raised in a law enforcement family, to serve and to sacrifice one’s self for others was engrained into Justin’s character since childhood. He understood the risks as he chose to follow in his father’s footsteps to become a protector of the peace in the community he held dear. That understanding lead to Justin living his best life: to the fullest, with a fierce love for his family, a loyal heart for his friends and a constant, infectious smile.

Nothing could truly prepare our family for the events that changed the course of our lives on March 24, 2020. Now, more than ever, we hold onto the memories that will create his legacy that will be carried on by all of those lucky enough to have known him.

The sorrow and grief our family has endured during the past four months as we waited to honor and celebrate the life our beloved son, dedicated husband, loving brother and loyal friend has been immeasurable. We also know we are not alone during these times, and are truly grateful to now have the opportunity to pay tribute to Justin.

He didn't get a political sideshow and a gold coffin, only love and respect for his sacrifice.

May God Bless him, his family and LEO's who put it all on the line for us every day.