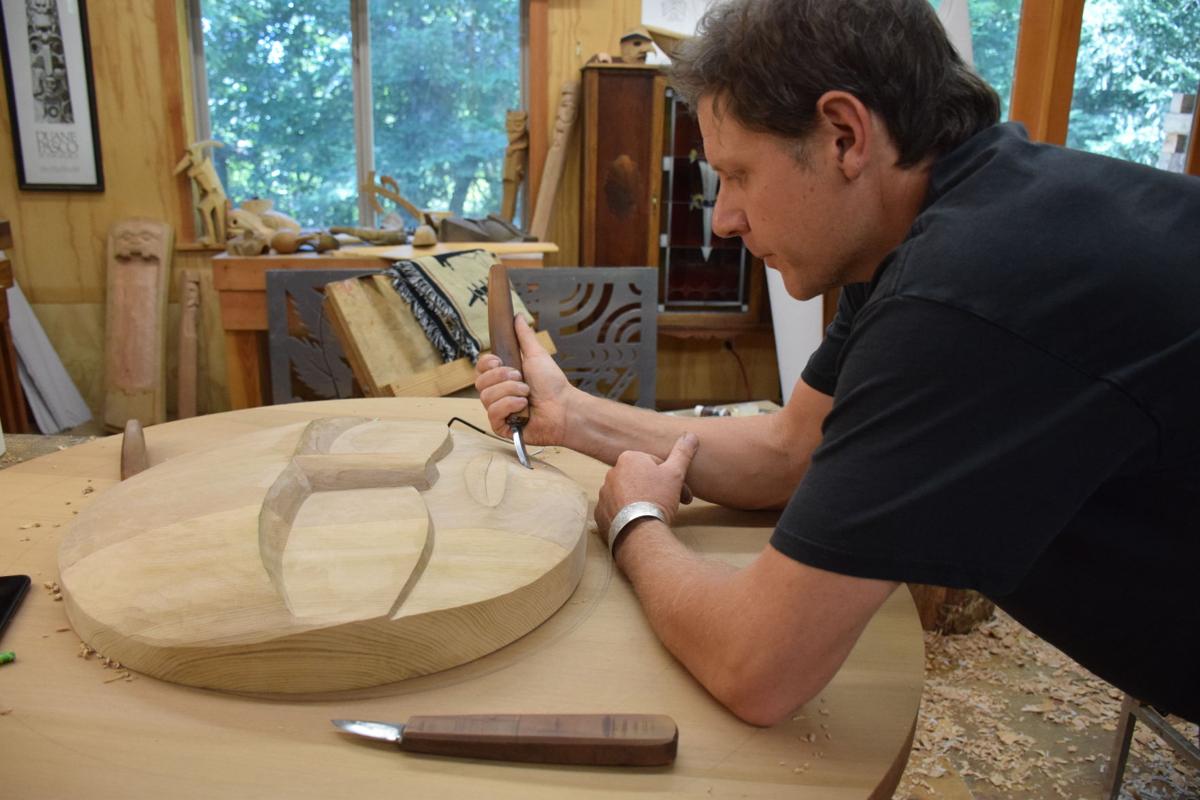 La Center woodworker Adam McIsaac carves the face of a sun that will be part of a 25-foot story pole to be placed at the Puyallup Tribe’s Emerald Casino. 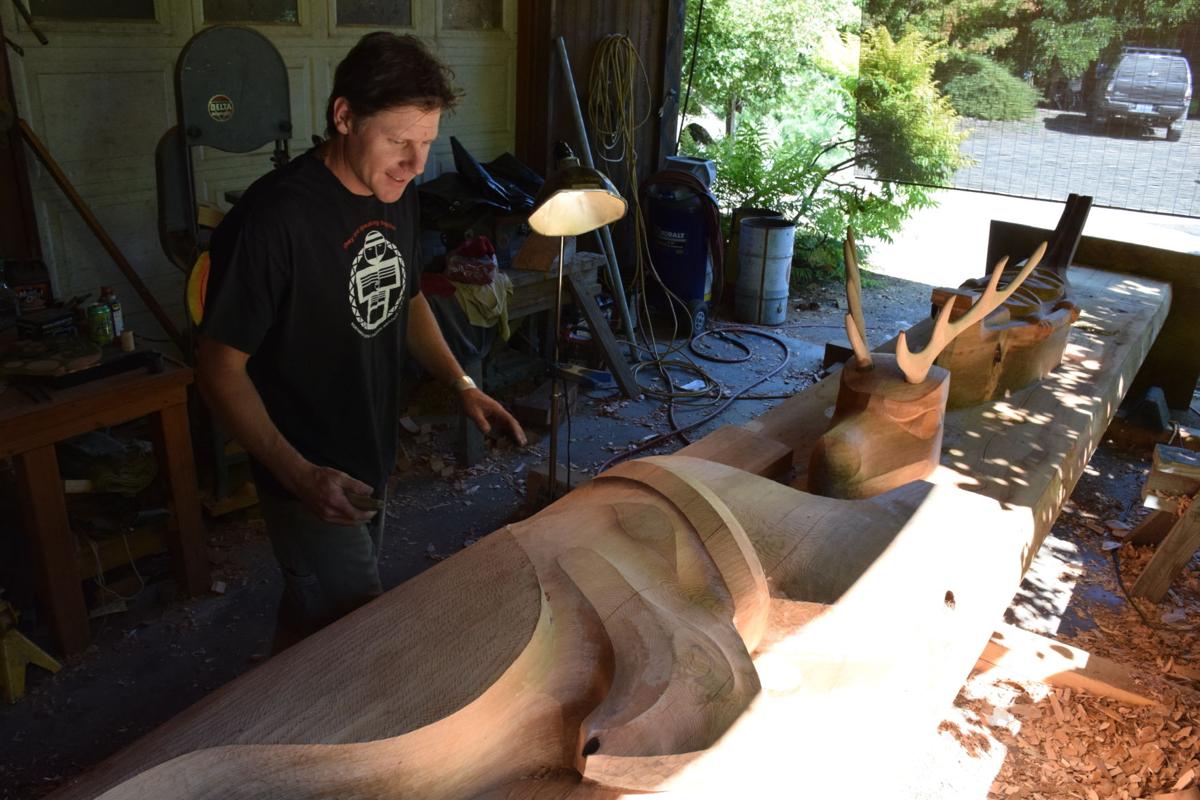 La Center woodcarver Adam McIsaac talks about the content of a story pole he is carving for the Puyallup tribe at his workshop Sept. 4. 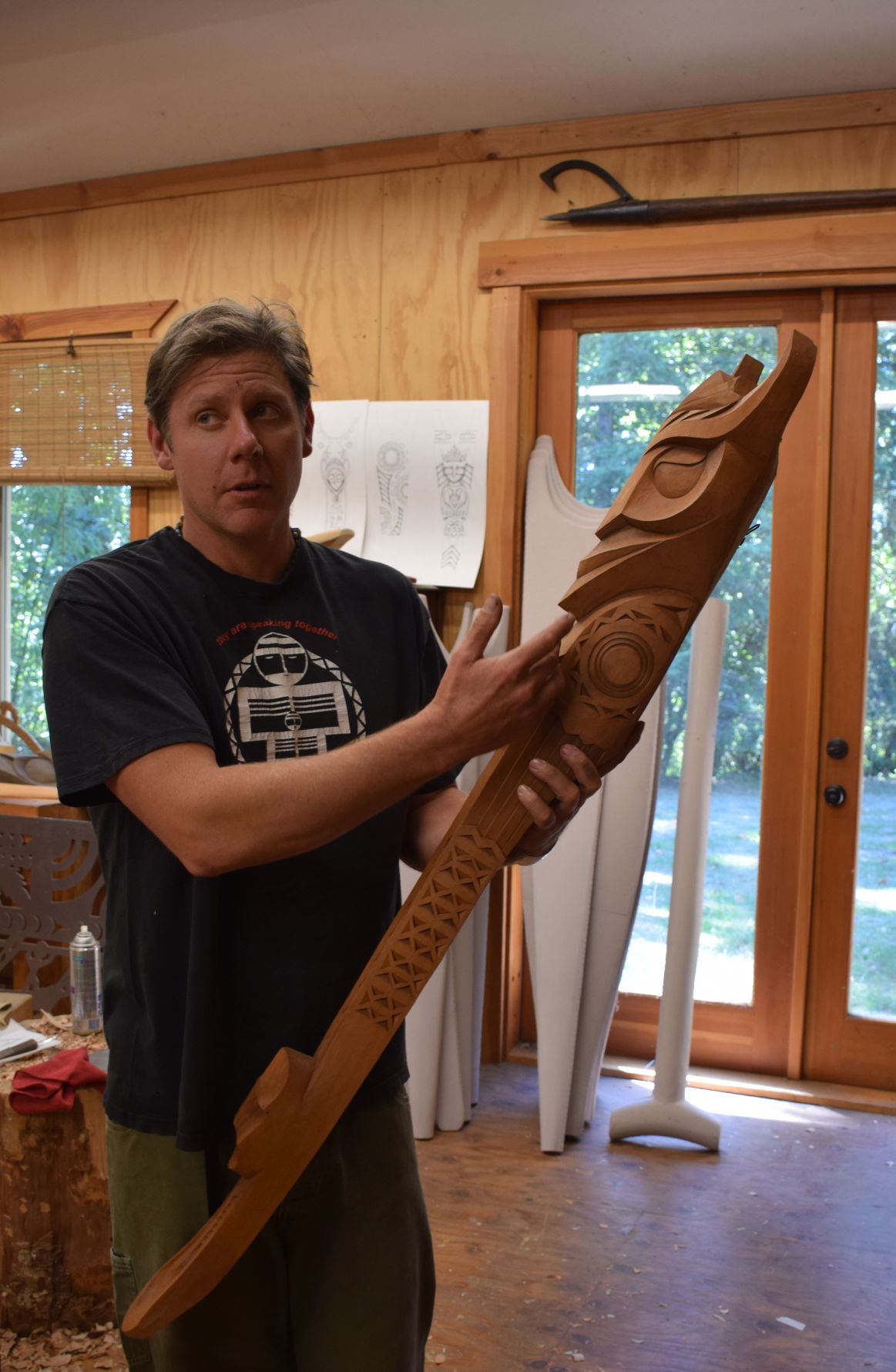 In a woodshop outside of La Center one local is churning out art indicative of the native peoples of the Pacific Northwest — but he isn’t native himself.

That doesn’t mean his work hasn’t been part of celebrations of Native American culture across Washington and Oregon. In total, Adam McIsaac estimates around 20 of his pieces have been public art, commissioned either by the respective states’ art commissions or other entities seeking authentic art.

McIsaac’s work includes pole carving at the Cathlapotle Plankhouse at the Ridgefield National Wildlife Refuge in 2005. The building itself is a recreation of the types of buildings that would have been in the area during Chinookan settlement.

When speaking to The Reflector at his shop Sept. 4, McIsaac said he has been carving for some 24-25 years, spurred on by an interest in native cultures that came from studying indigenous living. A lifelong appreciation of the local wildlife drew him to Native styles of carving, in part fostered from times out on the water with his biologist father.

At the time he was commissioned to work on the plankhouse there were few focused on the Columbia River style of carving, McIsaac said, an aesthetic indicative of the building and Chinookan art. From there his interest in the style grew — prior to getting into the style McIsaac said he asked the Chinook formally for permission to practice the art style, receiving their blessing.

“That’s how you really gain an understanding of an artform, is to understand the people. Not just read a book or go to a museum,” he said.

McIsaac has been working on his La Center property for about 20 years. Though the Columbia River style is his major focus, his current big project is carving a story pole for the Puyallup Tribe to be placed at the new Emerald Queen casino.

Not to be confused with a totem pole, the story pole has a different composition and relates to the tribe’s stories of the Sky World, based on a design from one of the tribal members. He said the 25-foot artwork’s base, a log shipped from Alaska, initially weighed roughly 6,000 pounds before cutting, and during The Reflector’s the pole was almost ready for paint.

McIsaac said the pole was one of the biggest pieces he has done, “definitely the tallest” he’s done by himself.

The pole won’t be a part of the Columbia Flyway Wildlife Show at the Vancouver Water Education Resources Center this weekend, due to both the timeframe and sheer size of the piece. McIsaac will have some of his work on display at the show, with this year marking the first time the event will feature Northwest coastal Native American art in competition.

Being a non-native carver in a Native style was tough at times, though usually, it wasn’t from tribal members, McIsaac said.

“If (Native people) see potential in somebody and they see somebody doing it right, wanting to respect it, then they embrace it. Not all of them, but some of them,” McIsaac said.

Over the years McIsaac has been able to discern differences in tribal styles that might go overlooked by casual observers — facial features on masks or they way animals looked.

“I think the main thing is just different culture, different reasons for carving,” McIsaac said. Compared to the more totemic style to the north, the Columbia River aesthetic generally came from a more personal place.

“It’s more of a spirit-aided, spirit helper artform. You didn’t really want anybody to see a lot of the art that you did because it represented one’s spirit helper,” McIsaac said. He added he worked with the Chinook to make sure whatever avenues his art takes is respectful of that notion.

“The art of the Columbia River, the Chinook art, has been one of the most understudied and under-practiced artforms in the United States,” McIsaac remarked. The style has rebounded in recent years, and though he recognizes the importance of staying true to the spirit of the artform he said he had a “style within a style” that he hopes honors that charge.

“The thing I’ve always done is thought where would Columbia River art had gone if time had treated the people of the river kinder,” McIsaac said.