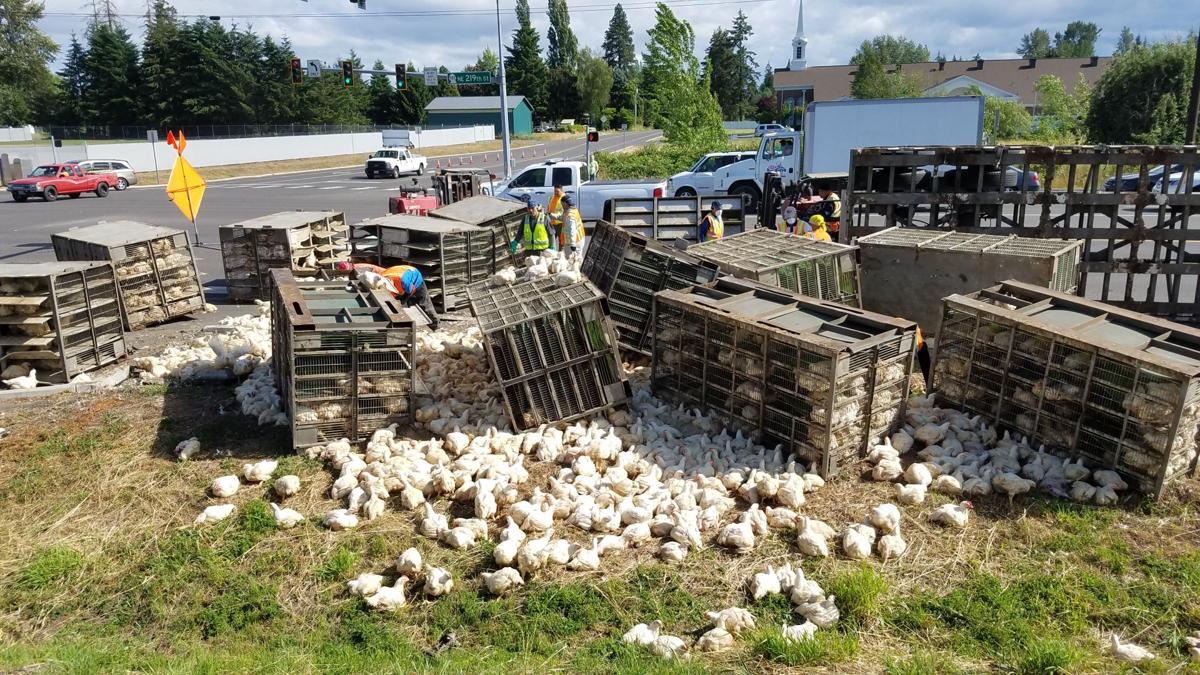 Chickens run loose after a semi-truck carrying them tipped over near Dollar's Corner. 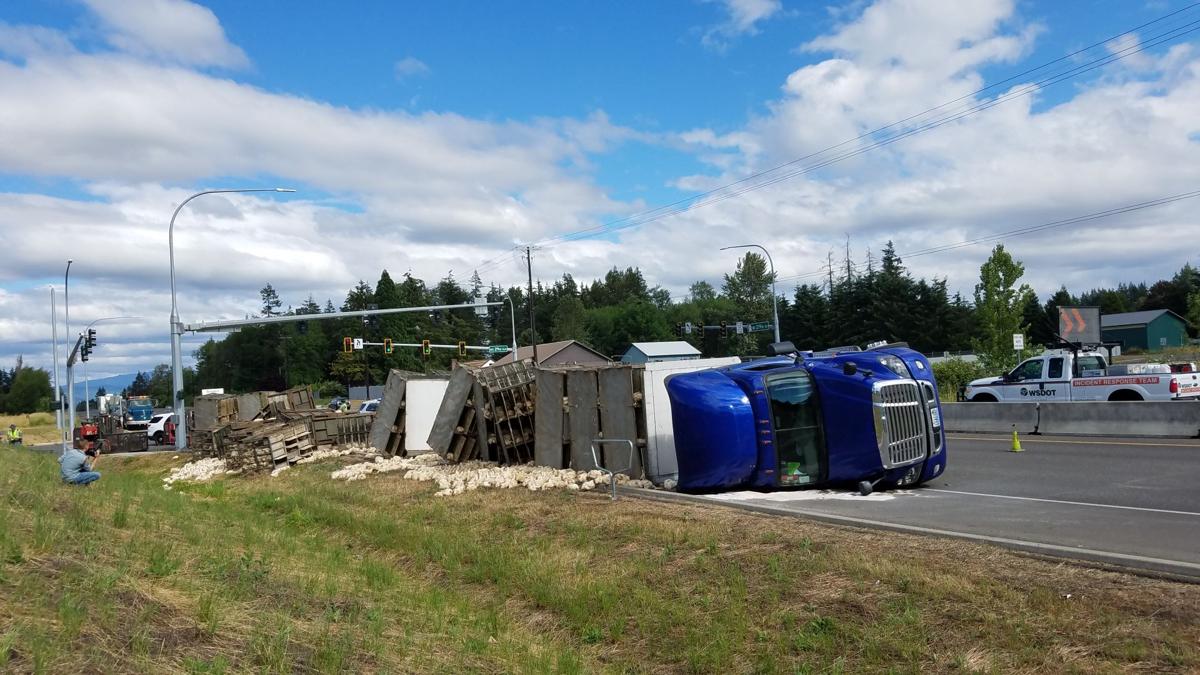 A semi-truck lays on its side as its cargo of chickens runs free. 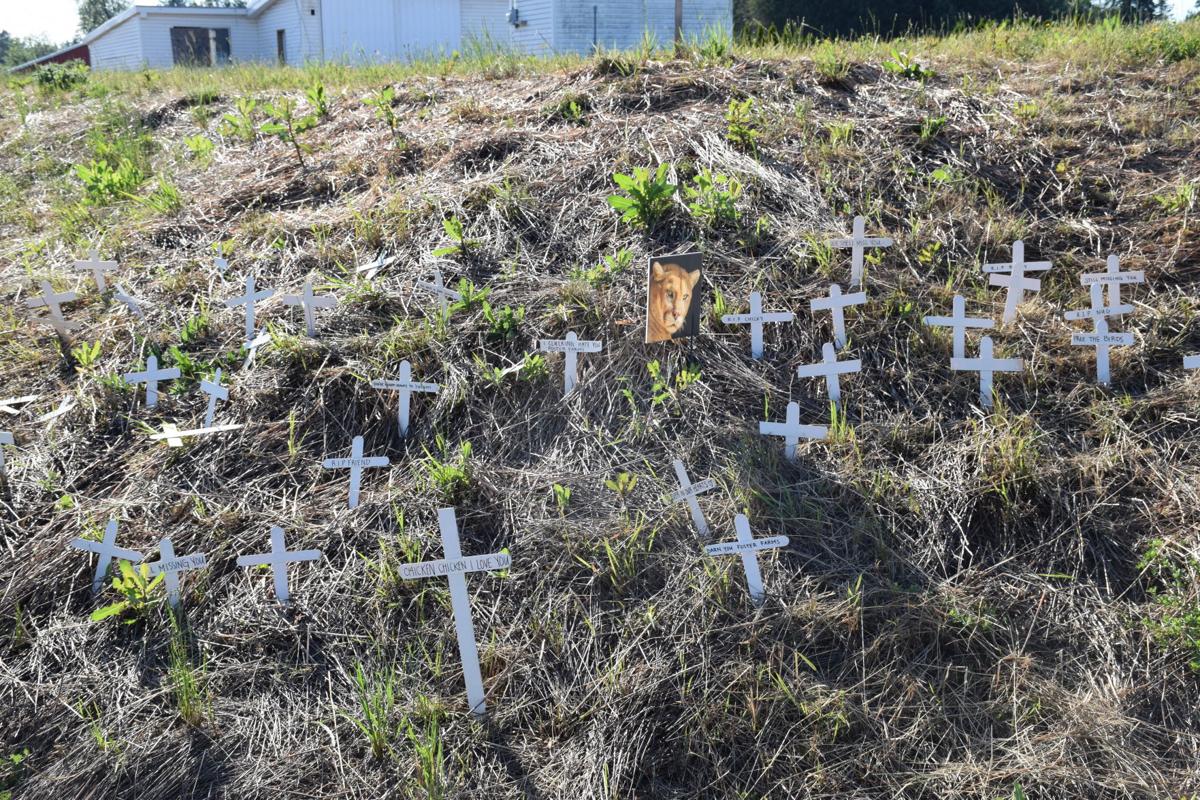 Dozens of crosses mark the spot where June 25 a truck carrying thousands of chickens failed to negotiate a U-turn and crashed on Route 502, injuring or killing hundreds of the birds.

A mockup of a planned billboard for the side of Route 502 where late last month a truck carrying thousands of chickens crashed, a response from PETA to raise awareness of veganism.

Chickens run loose after a semi-truck carrying them tipped over near Dollar's Corner.

A semi-truck lays on its side as its cargo of chickens runs free.

A semi-truck that could not navigate a U-turn ended up letting loose its cargo of thousands of chickens on SR 502 west of Dollar’s Corner June 25, bringing out animal rights activists and a dubious memorial following the incident.

"We received a phone call about an overturned semi-truck and chickens running a muck on the highway," Finn said. "When we arrived on the scene, this is what we found."

Finn reported that the truck carrying more than 5,000 chickens was on its way to a Foster Farms processing plant in Kelso. The driver had just picked up the chickens nearby and was trying to make a U-turn at the 29th Avenue intersection to head west toward I-5.

"He successfully made this U-turn once before. This was the second time and it didn't go so well," Finn said. He added that there are signs on 502 warning drivers of semi-trucks not to attempt a U-turn at this intersection. The driver should have followed the signs and made a legal U-turn at 92nd Avenue.

"The driver is not hurt, thank goodness, but he will be cited for making an unlawful U-turn with a commercial vehicle at 29th Avenue," Finn said.

Following the crash, Finn could not give an estimate on how many of the birds were killed. Washington State Department of Transportation crews arrived to help corral the loose animals.

At 4:45 p.m. employees of nearby Foster Farms had also arrived on the scene to aid in the cleanup, Finn said. At 5 p.m. westbound lanes on 502 at the intersection had been closed with a detour in place.

After the crash, more than a dozen animal rights activists appeared at the scene seeking to rescue some of the animals.

Cheyanne Holliday was one of the first. She explained that Finn’s coverage of the accident was picked up by some activists en route to a demonstration in Portland. The group then shifted focus to the overturned truck.

Holliday estimated about 16 to 18 activists were at the scene. She went live on Facebook during the event, documenting the chickens on the side of the road as well as a second trailer picking up the loose birds.

Holliday said that activists had attempted to negotiate the release of at least one of the animals for it to go to a sanctuary. One chicken ran up an embankment separated from the group, eventually grabbed by activist Amber Canavan.

Canavan’s holding of the chicken resulted in an hour standoff with police, Holliday said, though eventually authorities were able to remove the chicken and Canavan was arrested.

Holliday said that activists stuck around at the scene until all of the animals were removed at around 8 p.m.

Canavan’s charges are theft and failure to obey a peace officer. Fellow activist Emily Rezentes said that those in the animal rights community are asking for Canavan not to be prosecuted, calling it civil disobedience in the face of laws they feel unjust.

Canavan made a public post on her Facebook account June 27 addressing the concern for her she had been receiving, declining help for herself though promoting a fundraiser for an animal sanctuary.

The day following the accident activists coordinated an emergency candlelight vigil at Foster Farms’ processing facility in Kelso, which Rezentes said was well-attended.

“It was really beautiful to see the turnout for that vigil,” Rezentes remarked.

Rezentes commented how although the dead and injured birds was a tragedy, the animals were already going to slaughter, reasoning that the exposure the accident gave to animal rights activism has spurred some into action.

On July 28 dozens of makeshift crosses had appeared at the site of the accident. The memorials had messages ranging from more sincere (“free the birds”) to tongue-and-cheek (“RIP nug”) placed on the Northwest corner of the intersection where the crash happened.

It was unclear who was responsible for the memorial.

People for the Ethical Treatment of Animals (PETA) announced today that they intend to place a billboard at the site of the June 25 truck crash.

The animal rights organization announced in a release their intent to place a billboard displaying a chicken and the phrase "I'm ME, not MEAT. See the individual. Go vegan."

“This devastating crash left countless birds dead or mangled on the side of the road, and those who survived presumably ended up under the slaughterhouse knife,” PETA Executive Vice President Tracy Reiman stated in the release. “PETA’s billboard would remind all motorists that the best way to prevent these tragedies is to keep smart, sensitive chickens off the road in the first place by going vegan.”

The release noted claims from Foster Farms that “accidents of this nature are rare” though added that PETA had made note of more than 50 crashes involving animal transport trucks in the U.S.