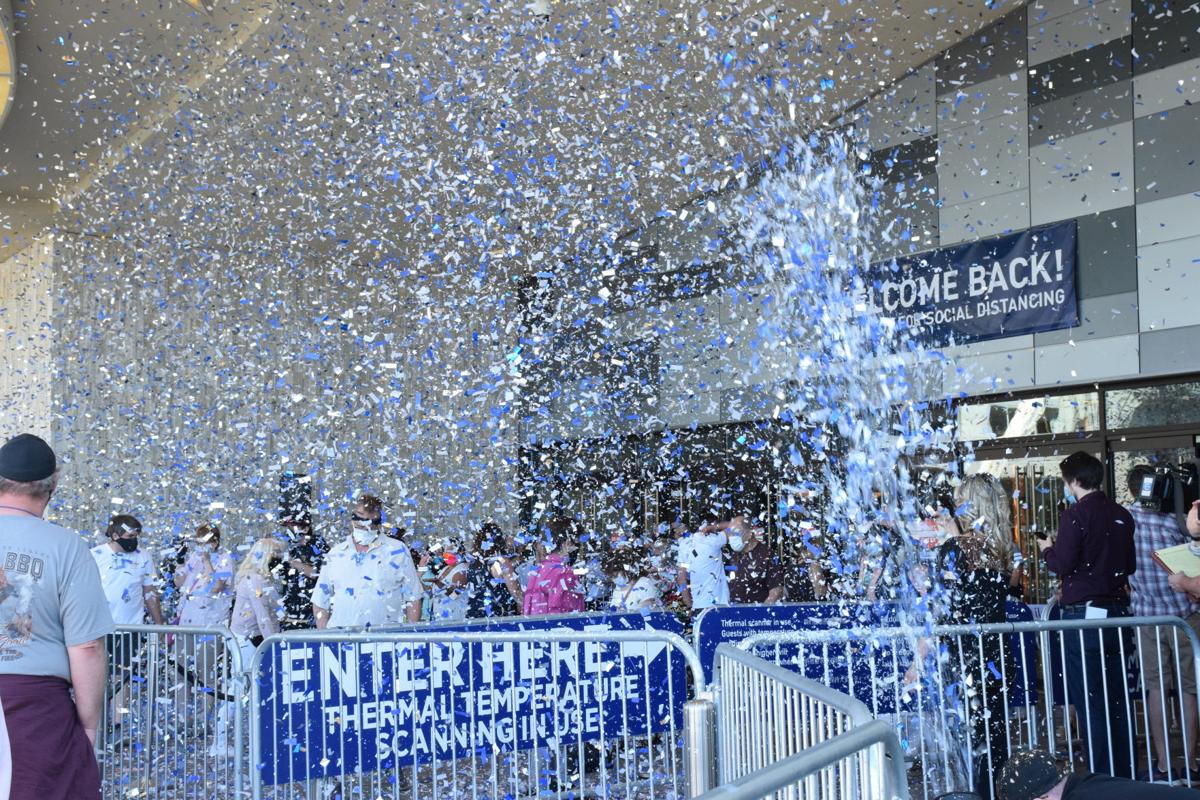 Confetti shoots off as ilani welcomed its first visitors in more than two months at an official reopening Thursday, May 28. 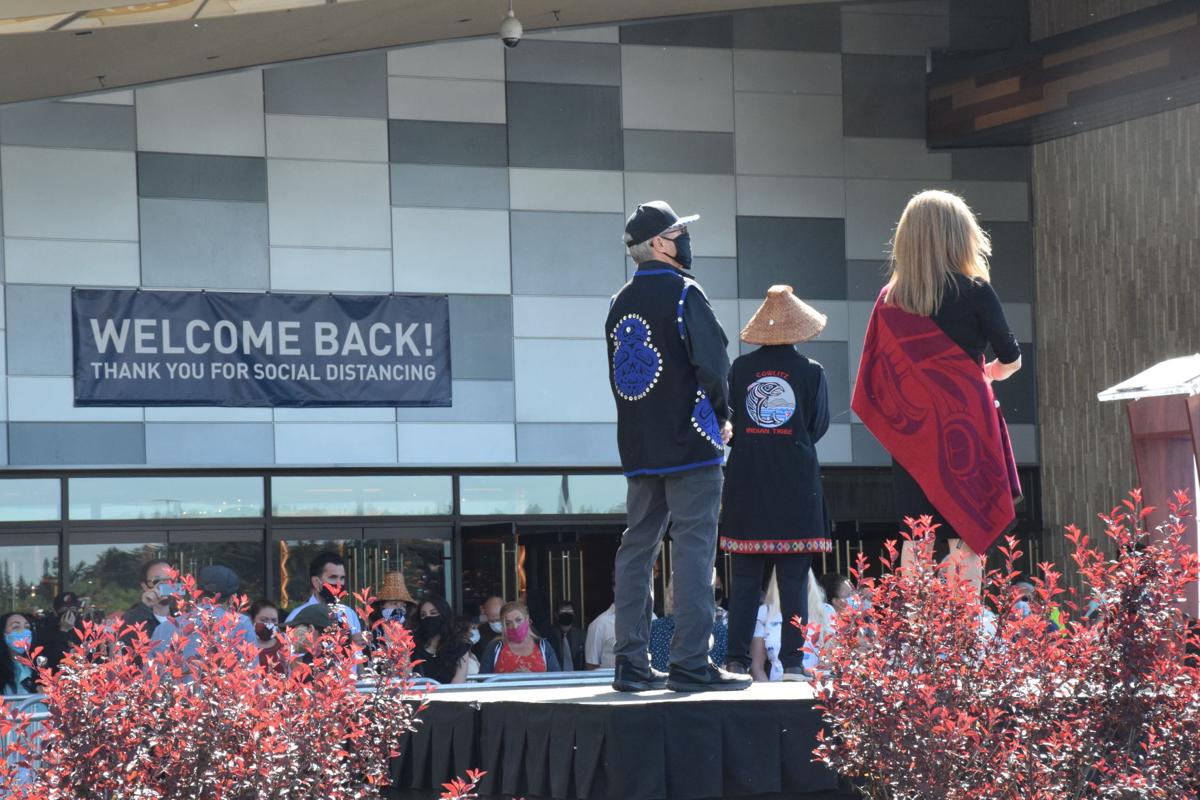 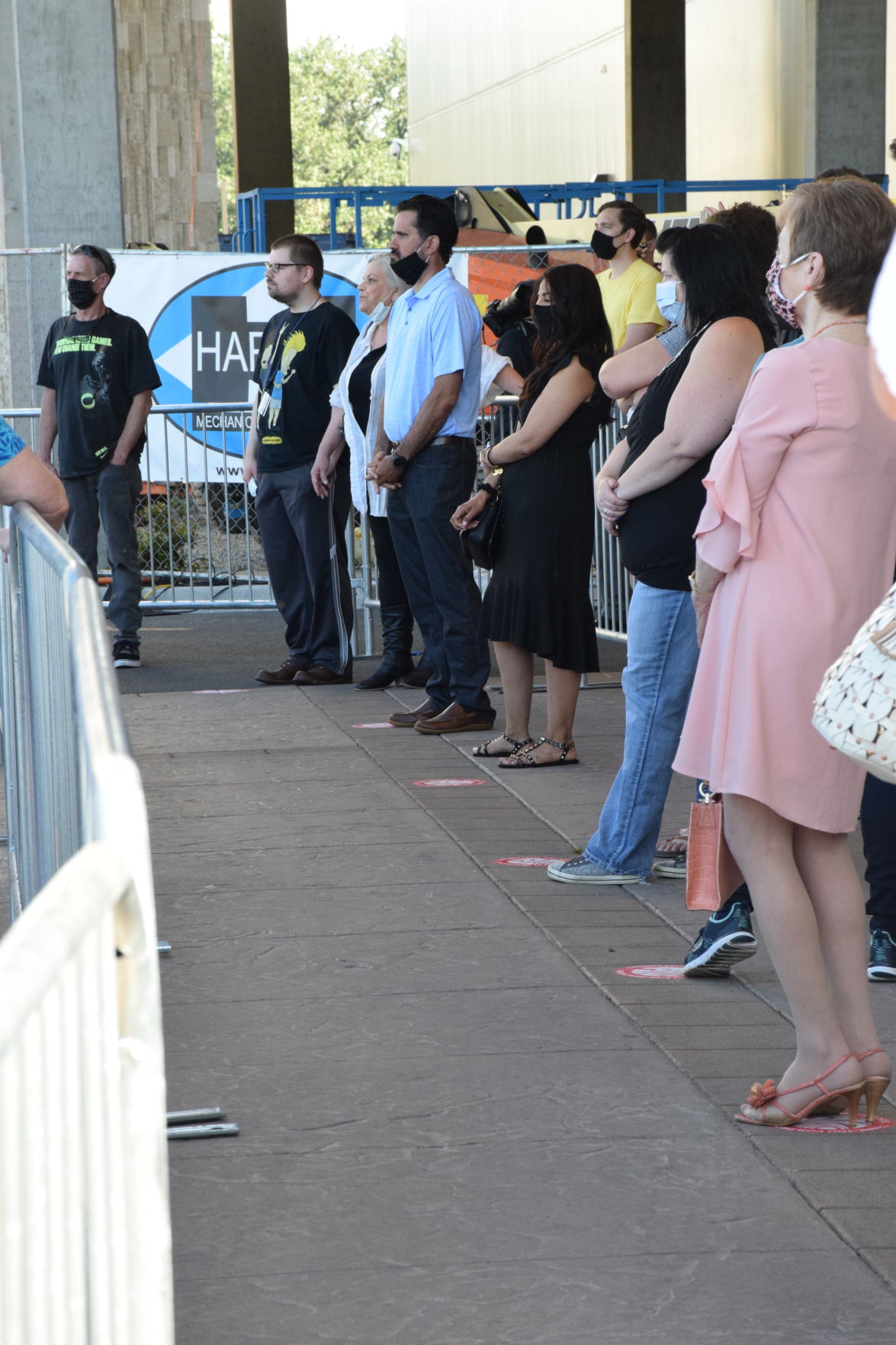 The first patrons of ilani in more than two months listened to casino resort and Cowlitz Tribe officials during a reopening ceremony Thursday, May 28, standing at marked intervals encouraging social distancing.

Confetti shoots off as ilani welcomed its first visitors in more than two months at an official reopening Thursday, May 28.

The first patrons of ilani in more than two months listened to casino resort and Cowlitz Tribe officials during a reopening ceremony Thursday, May 28, standing at marked intervals encouraging social distancing.

Those looking for entertainment in Clark County can once again be patrons to ilani as the casino resort officially reopened its doors Thursday, May 28.

Led off by a performance by Cowlitz Tribe drummers, members of the tribe and ilani representatives welcomed hundreds of guests gathered for the first day the building was open in more than two months. When the doors officially opened a winding line of patrons led into the parking lot, with markers on the ground showing places to stand 6 feet apart, a recommendation of social distancing in order to stop the spread of COVID-19.

“It’s a great pleasure to welcome you all back,” Cowlitz Tribe Chairman Bill Iyall told the crowd. On March 16, ilani announced its closure in response to the COVID-19 pandemic which initially was to run until April 1, though the date would inevitably be pushed back, leading to 70 days of inoperation in total.

The closure had not been easy, Iyall said, affecting some 1,700 employed at ilani along with the programs and services provided to tribal members that are funded through revenues. Though challenged with the closure, the prior success of ilani allowed the tribe to dedicate more than $750,000 to COVID-19 relief efforts, Iyall added.

Iyall noted that the tribe has faced challenges before, having undertaken a decades-long process that ended in federal recognition of the tribe in 2000, and legal challenges at the tribe’s intent to build ilani on their 152-acre reservation.

Iyall was joined by Cowlitz spiritual leader Tanna Engdahl who led a blessing, and ilani President and General Manager Kara Fox-LaRose, as part of the reopening ceremony. Fox-LaRose noted the three-year anniversary of ilani’s opening in April that was overshadowed by the pandemic.

As a tribal nation, the Cowlitz had opted to move faster to reopening than Clark County itself was allowed, though Fox-LaRose said ilani was closely following Centers for Disease Control and Prevention and state health authorities’ guidelines, adopting a phased approach to opening in a similar fashion to Washington’s own reopening approach.

For now, large events such as concerts and shows would be postponed, Fox-LaRose said. Physical distancing measures were put in place on the gaming floor and in restaurants and bars. Hand sanitizer and disinfectant wipes were readily available, and staff would be regularly cleaning “high-touch” areas such as gaming machines, she explained.

All staff and visitors will be required to wear masks, and those entering will be required to pass through a thermal scanner to check for temperature. Those with a fever of 100.4 degrees fahrenheit would not be allowed to enter as a precaution against disease spread, Fox-LaRose explained.

About half the game floor was “shut off,” Fox-LaRose said, with table games featuring plexiglass barriers as another precaution, with spacing between guests.

“Seeing you all here today reminds us that our team has delivered on our promise to make our community proud,” Fox-LaRose said.

She said the extended closure “symbolizes (the tribe’s) commitment to protect the health and safety of our community,” adding that the multitude who showed up was a “vote of confidence” on ilani’s ability to maintain safety with the pandemic still looming.