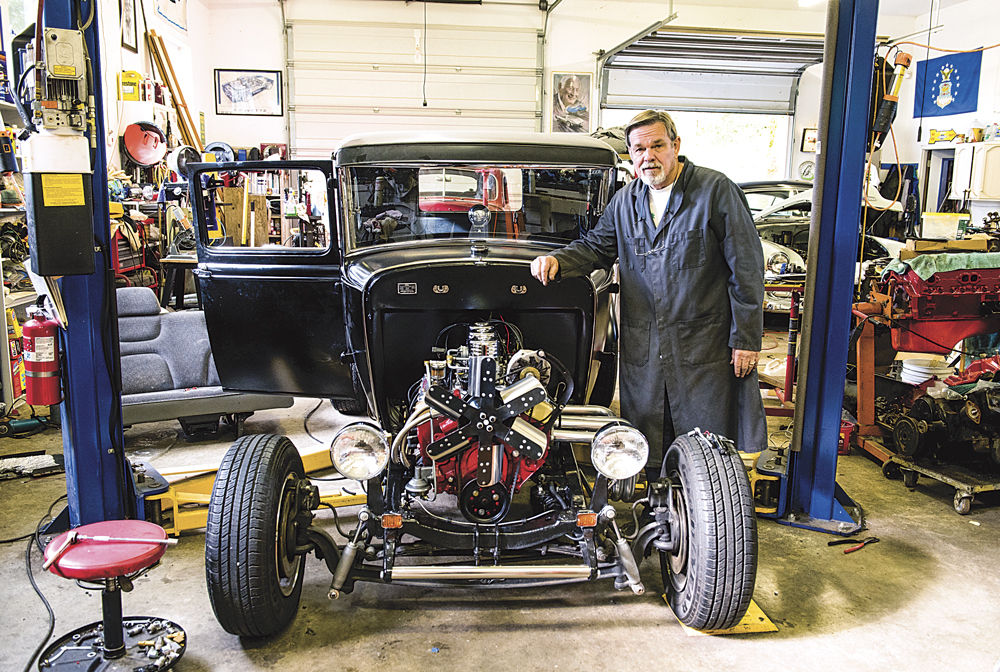 Don Brissler of Battle Ground enjoys working on his Model A hot rod, one of the car projects underway in his shop. 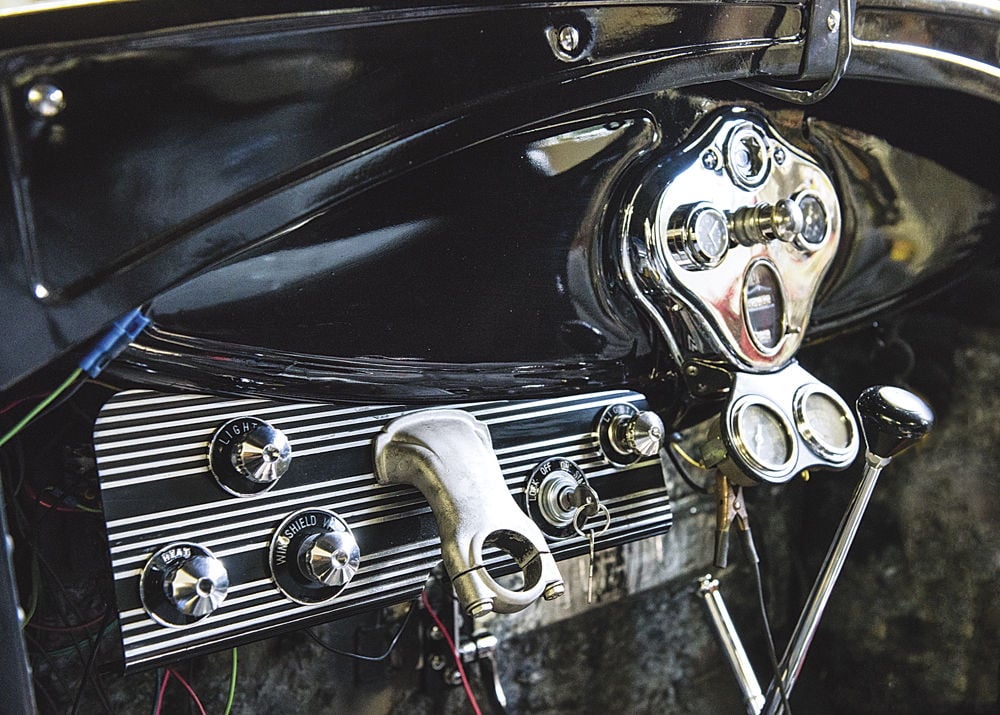 This modified dashboard in Don Brissler’s Model A hot rod was fabricated from an old aluminum running board, Corvette knobs, and Plymouth switches. 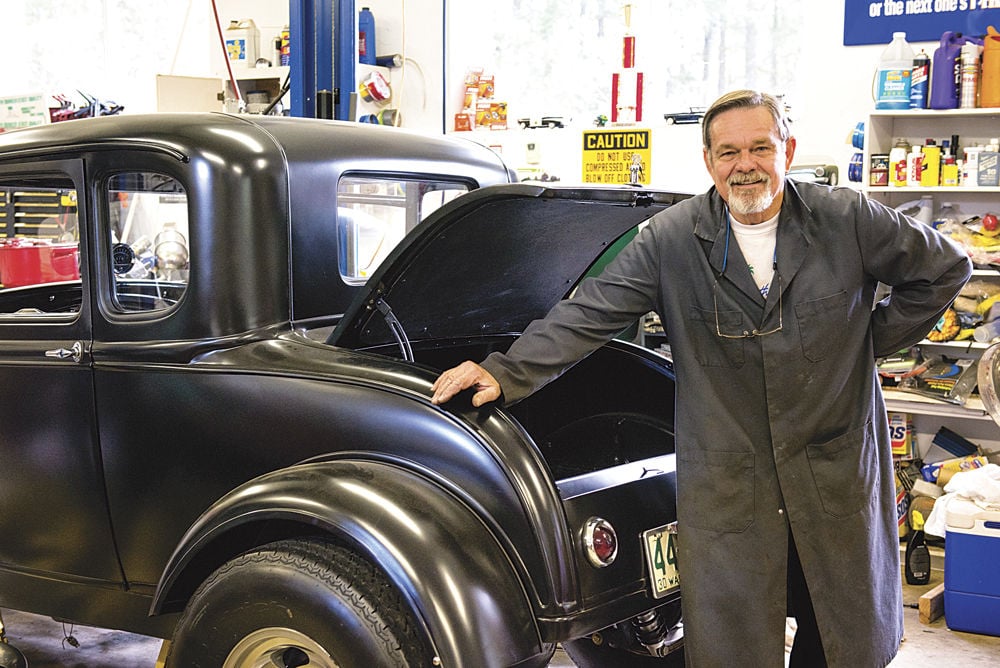 BATTLE GROUND RESIDENT Don Brissler brings a broad set of skills to his car projects. He studied mechanics and spent 30 years as a sales rep for Chevrolet. 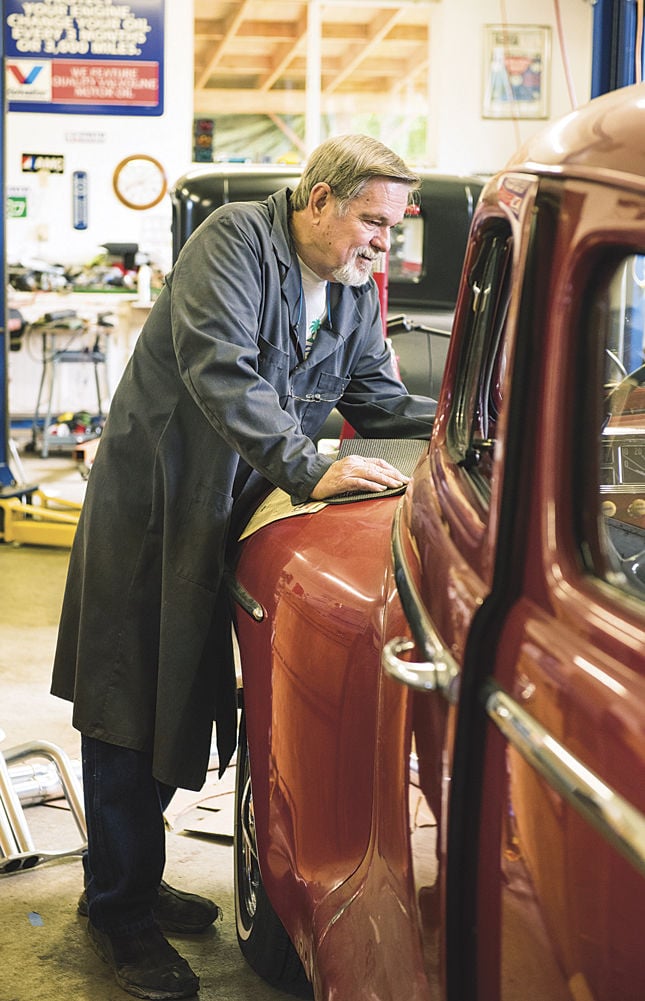 Don Brissler’s red 1949 Plymouth is unique for its 1948 body style, which was only produced for the first few months of the year.

Don Brissler of Battle Ground enjoys working on his Model A hot rod, one of the car projects underway in his shop.

This modified dashboard in Don Brissler’s Model A hot rod was fabricated from an old aluminum running board, Corvette knobs, and Plymouth switches.

BATTLE GROUND RESIDENT Don Brissler brings a broad set of skills to his car projects. He studied mechanics and spent 30 years as a sales rep for Chevrolet.

Don Brissler’s red 1949 Plymouth is unique for its 1948 body style, which was only produced for the first few months of the year.

BATTLE GROUND – Don Brissler’s love of cars started when he was a high school sophomore in Southern California.

The senior class boys at his school would cart lead from the linotype machines in the printing class to weigh down the floor of their hot rods, so they would sit lower for their photos in the school yearbook.

Brissler got his first car a year later, a 1948 Plymouth, and with it his first taste of freedom.

“I remember driving up to the end of my dad’s road and looking down the road, and knowing I had freedom,” he said. Back then the ultimate car was the Model T hot rod, and that era still drives his car projects.

Brissler counts nine vintage cars in his collection, many discovered at swap meets. His 1952 Chevrolet Bel Air Sport Coupe Hardtop came from a swap meet six years ago. It’s parked next to a 1949 Plymouth, unique for its 1948 body style which was produced for only the first few months of the year. Brissler is working on a 1930 Model A hot rod he picked up at the Portland Swap Meet last year.

Car buffs are a close knit group, and Brissler found out how far that went last year when he was facing a surgery. His car buddies hauled the Model A up to one of their shops and treated it to a new satin black paint job. They knew that if the car was sitting in the shop with a fresh paint job, Brissler wouldn’t waste any time getting up and around again. They were right; he kept busy during his idle recovery time by perusing parts catalogs, itching to work on his car.

Brissler brings a broad set of skills to his car projects. He studied mechanics and spent 30 years as a sales rep for Chevrolet. He can fabricate and paint the metal parts and get the mechanics running like new. His shop has a little bit of everything in it, gleaned from swap meets, U Pull It yards, and eBay. It looks like there are parts piled everywhere, but Brissler knows right where everything is. One of his tidier friends commented, “if my (neatly organized) shop is like a hospital, yours is like a trauma room.”

Brissler has made use of those parts for his Model A. The car didn’t originally have a dashboard around the steering wheel, but just a small triangle of dials centered on the console. Brissler fabricated a dashboard out of a piece of ridged aluminum running board from an old four-wheeler, cutting it to fit, painting it black, and then sanding away the paint from the ridges to create shiny stripes of aluminum.

Brissler fitted it with knobs from a 1957 Corvette, moved the ignition to the new dash, and fitted a repainted Chevy steering wheel with a Model T horn. He wanted a clock in the car, so he removed the chrome rimmed face from a bicycle mounted clock and fit it into the original control panel. The seat was missing, so he pulled a short middle seat from a late model minivan which fits the space perfectly. A cab heater from a tractor is tucked into the trunk behind the seat for chilly nights.

All of this is Brissler’s creative outlet. “I can’t paint a picture,” he said, “but I can build cars.”

Brissler’s 6-bay garage and shop is usually booming with Doo Wop music from the 1950s and 60s, and the walls are adorned with his mementos from musical favorites, his years at Chevrolet, and his Vietnam veteran banner from his Air Force service.

Summers are time to get out and share these cars. Brissler frequents the Beaches Cruise In at the Portland International Raceway on Wednesday nights, and the Alderbrook Park Uncle Rod Run Cruise In on Fridays.

“I love to see old cars on the road, no matter what kind they are,” says Brissler.

Brissler’s most memorable cruise in was a few years ago when the North County Cruisers were at Burgerville in Orchards. It was a low key, fun cruise in, where every car received a prize of some kind.

One of the visitors was a retired police officer, and he was keeping a close eye on the cars. He called Brissler aside, and pointed out a man with a beer in his hand, sitting in the front seat of Brissler’s car. The retired officer said he didn’t want to grab the man because he might spill his beer in the car, so he talked him into leaving. That night, Brissler received the award for “Car Most Likely to be Broken Into.”

Brissler’s love affair with cars led to another love. When he met his wife, Bev, 30 years ago, the first thing that caught his eye was that she owned three Corvettes. In fact, she was the first female president of the Rose City Corvette Club in Portland.

One of those Corvettes, a 1957 model, has pride of place in their garage. It was sitting in a chicken coop in Boring, OR, Brissler said, when he and a buddy dragged it home in pieces, scrounged up parts for it, and finally got it running around 1993.

Projects and parts fill every corner of Brissler’s shop, and he is full of ideas for his next project. He doesn’t plan to stop working on cars, or driving them, any time soon.

“Every time I drive my cars, I look through the window with 17-year-old eyes,” said Brissler.

“Every time I drive my cars, I look through the window with 17-year-old eyes.” – Battle Ground resident Don Brissler.