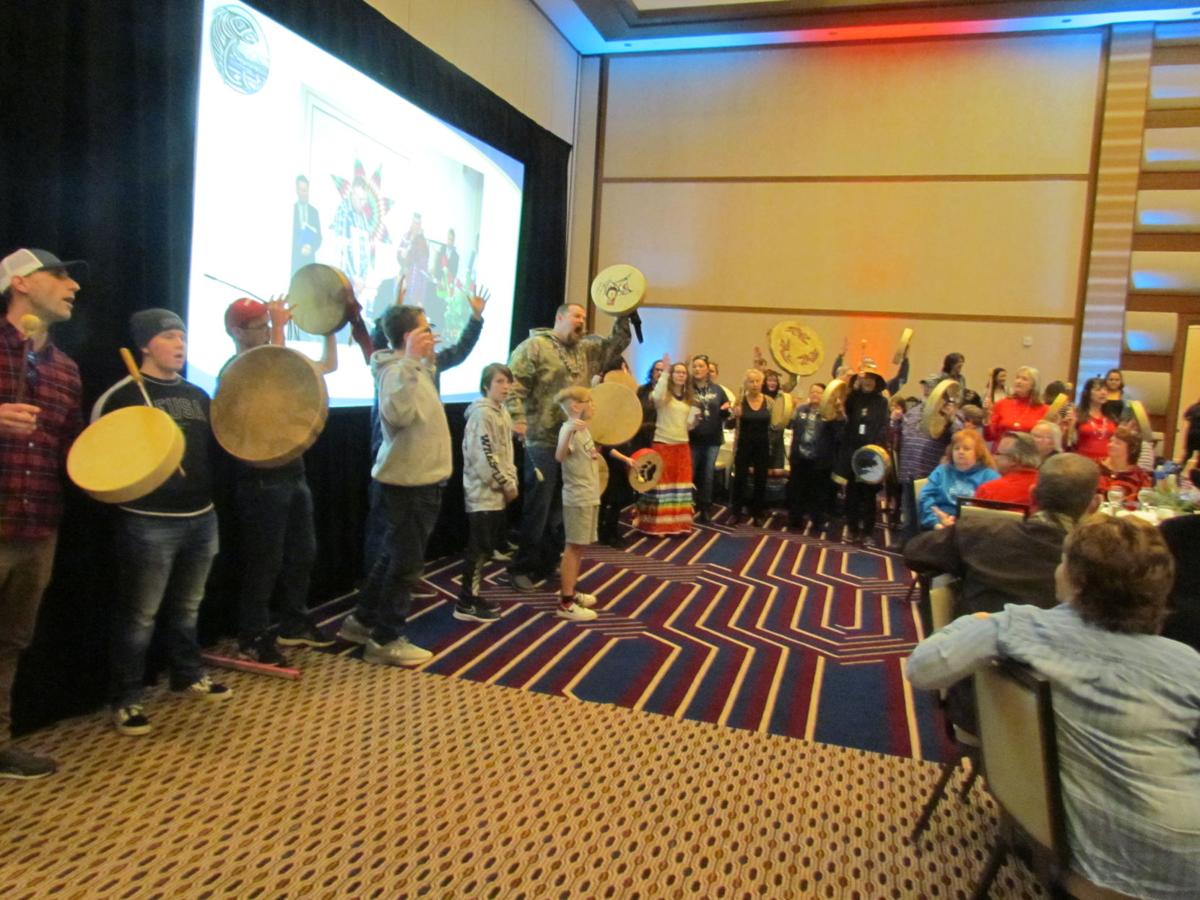 DRUMMING, SINGING and dancing were part of a Feb. 16 program held to celebrate 20 years since the Cowlitz Tribe gained official federal government recognition. Most of the drummers and singers are members of the 4,200-member Tribe which operates the ilani Resort and Casino near Ridgefield. 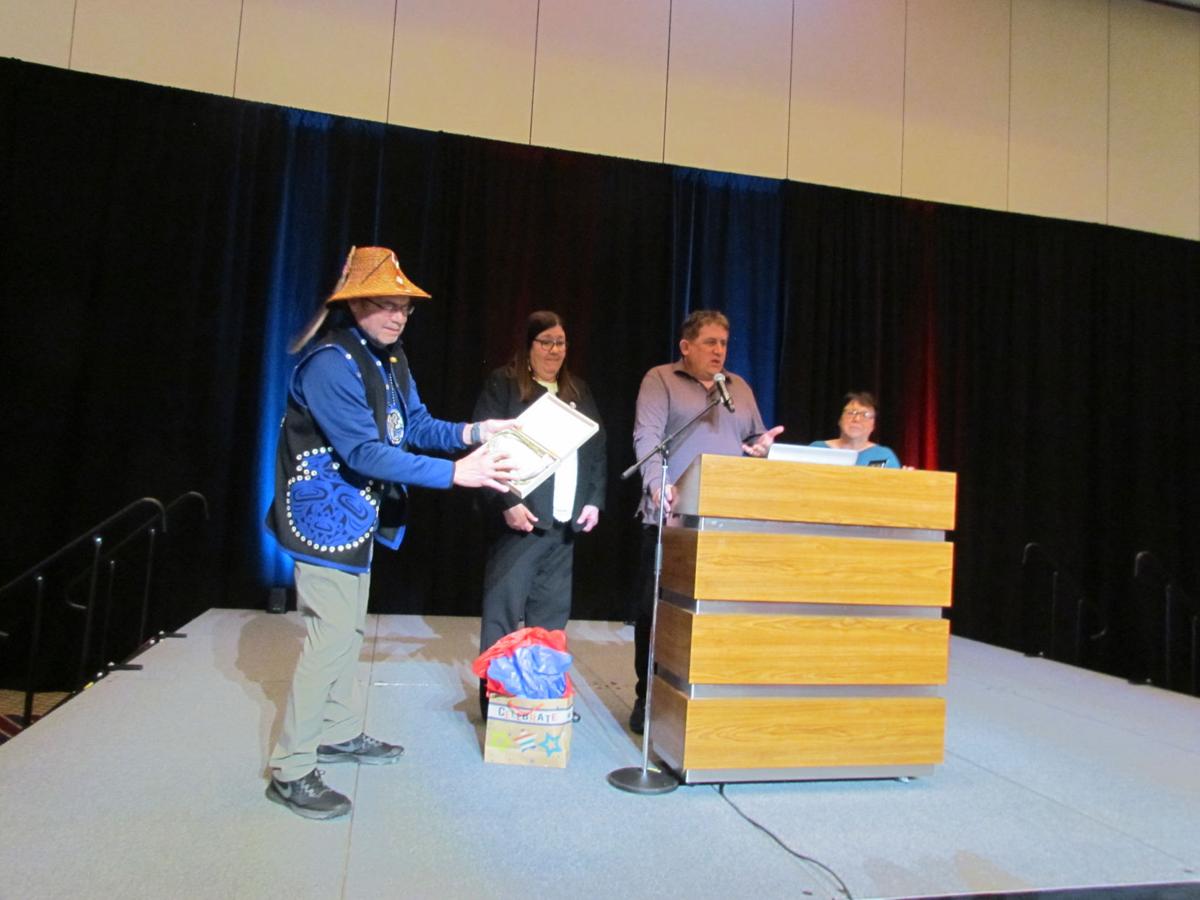 COWLITZ TRIBE CHAIRMAN Bill Iyall (left) shows a gift presented by members of the Mohegan Tribe of Connecticut during a recognition celebration held Feb. 16 at the ilani Resort and Casino near Ridgefield. Speaking at the podium is Cowlitz member Dave Barnett. Mohegan representatives are Patricia LaPierre and Kathy Regan-Pyne. 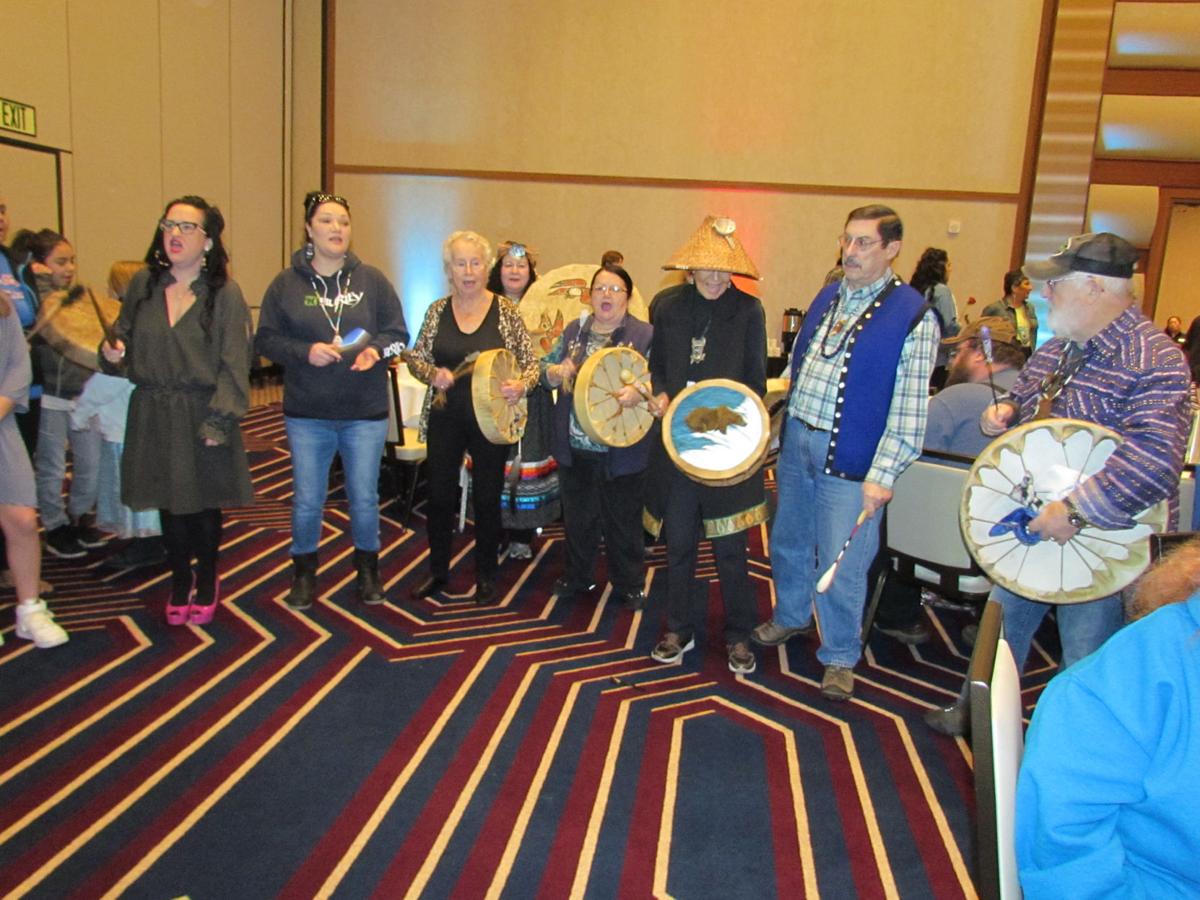 DRUMMING, SINGING and dancing were part of a Feb. 16 program held to celebrate 20 years since the Cowlitz Tribe gained official federal government recognition. Most of the drummers and singers are members of the 4,200-member Tribe which operates the ilani Resort and Casino near Ridgefield.

Tribal Chairman Bill Iyall recounted the tribe’s efforts to gain recognition and expressed appreciation to those who were instrumental in bringing about the historic event.

Former Tribal chairman the late John Barnett was credited with leading the tribe’s effort for both recognition and initial reservation land. Barnett died in 2008 after 24 years as chairman.

Official recognition was followed by successful efforts to establish a reservation location, which required further federal approval. Then, less than three years ago, the tribe opened the ilani Resort and Casino near Ridgefield, which has contributed to improved health care and housing for many of the tribe’s 4,200 enrolled members. The recognition celebration event was held at the ilani Resort.

The Tribe officially submitted documents to the federal government seeking acknowledgment of their existence in 1978, although efforts were made to do that in the early 1970s. Some believe the process began even earlier than that when the Cowlitz leadership did not sign treaties with the United States government in 1855.

It was not until Valentine’s Day 2000 when the Cowlitz gained official federal recognition as a viable tribe. A document signing ceremony in Washington, D.C., attended by several tribal members, marked that milestone.

But then the Quinault Indian Nation appealed that decision, expressing concern about retaining control of their reservation, which had been allotted to members of several tribes, including the Cowlitz. In 2002, the federal government affirmed the Cowlitz recognition decision.

The initial Cowlitz Reservation was established in 2010 on 152 acres near Ridgefield.

The tribe is headquartered in Longview and governed by a 22-member elected tribal council. Phil Harju, vice chairman of the tribe, said the tribe’s General Council includes all enrolled members who elect the tribal council.

The tribe survived several legal challenges including lawsuits by the city of Vancouver, Clark County, La Center card rooms, Confederated Tribes of the Grand Ronde in Oregon and others. In April 2017, the Cowlitz opened the doors of ilani Resort and Casino.

To achieve recognition with initial reservation, the Cowlitz were joined by the Mohegan Tribe of Connecticut. Under a management agreement, the Mohegans will operate ilani for seven years. Kara Fox-LaRose, a 24-year member of the Mohegan Tribe, is currently president and general manager of ilani.

“We will always hold the Mohegans near and dear to our hearts,” said Iyall, noting that the Cowlitz have been able to pay back their financial obligations to the Mohegans and have also been able to refinance their remaining debt at 4.5 percent interest. Members of the two tribes exchanged gifts.

Tribal member Dave Barnett spoke about his father, former chairman John Barnett, relating how John believed tribal ancestors had once returned to his ranch in the form of seven bald eagles.

In congressional testimony in 2004, John Barnett urged lawmakers to streamline the process for review and approval of tribal applications. Barnett explained how difficult it is for a tribe to achieve recognition, noting, for example, that a required Environmental Impact Statement could cost $1 million.

“Where is an unrecognized, landless tribe supposed to find that type of money?” Barnett questioned, adding that the Cowlitz had suffered 150 years of “benign neglect.”

John Barnett told lawmakers that there were 100 or more tribes seeking federal recognition at that time. At the pace of two or three a year, it will never get done, Barnett suggested. He also recognized the “controversial politics of Indian gaming.”

Stanley Speaks, now retired from the Bureau of Indian Affairs after 35 years heading the Portland office, recounted the lawsuits the Tribe had faced over the years. He said the “Department of the Interior could have done a better job working with this tribe in gaining federal recognition.” He said the ilani Resort is “good for the community and great for the state of Washington.” Speaks is a member of the Chickasaw Nation in Oklahoma.

Dr. Beckham, who worked with the Cowlitz on federal recognition effort for 21 years, recounted the delays between the time documents were submitted to federal officials and the time assessments of those documents were received, noting that years would go by before a notice of deficiency would be issued.

Dr. Beckham taught American history at Lewis and Clark College in Portland for 42 years. His doctoral dissertation, his six-part television series and his books on American tribes resulted in his retention by the Cowlitz Tribe for assistance in the recognition effort. He authored the tribe’s petition for recognition, which involved considerable research at the Smithsonian and the National Archives in Washington, D.C. He participated in congressional hearings.

Iyall said Beckham will now focus on regaining fishing and hunting rights for tribal members. Beckham said he has prepared a report on the subject, which is now in the hands of the tribal council. He hopes that officials of the state Department of Fish and Wildlife will meet with Cowlitz leadership to discuss aboriginal hunting and fishing territories and rights.

Tribal member Mike Hubbs announced that he is working on a language program for the tribe, which will include an online dictionary.

Resort and Casino President Fox-LaRose said 85 percent of the resort’s employees had never worked in a casino before.

“Our goal is to align ourselves with community leaders,” said Fox-LaRose, noting that ilani has been recognized three years in a row as “best in the northwest” by industry magazines. The resort has also received about 100 other awards, she said.

Fox-LaRose said that the Resort expanded its entertainment facilities on its first anniversary, and added a gas station and convenience store in its second year. As the resort nears its third anniversary, a 2,700-space parking garage is currently under construction. That garage could be expanded to 4,000 cars in the future if needed, she said.