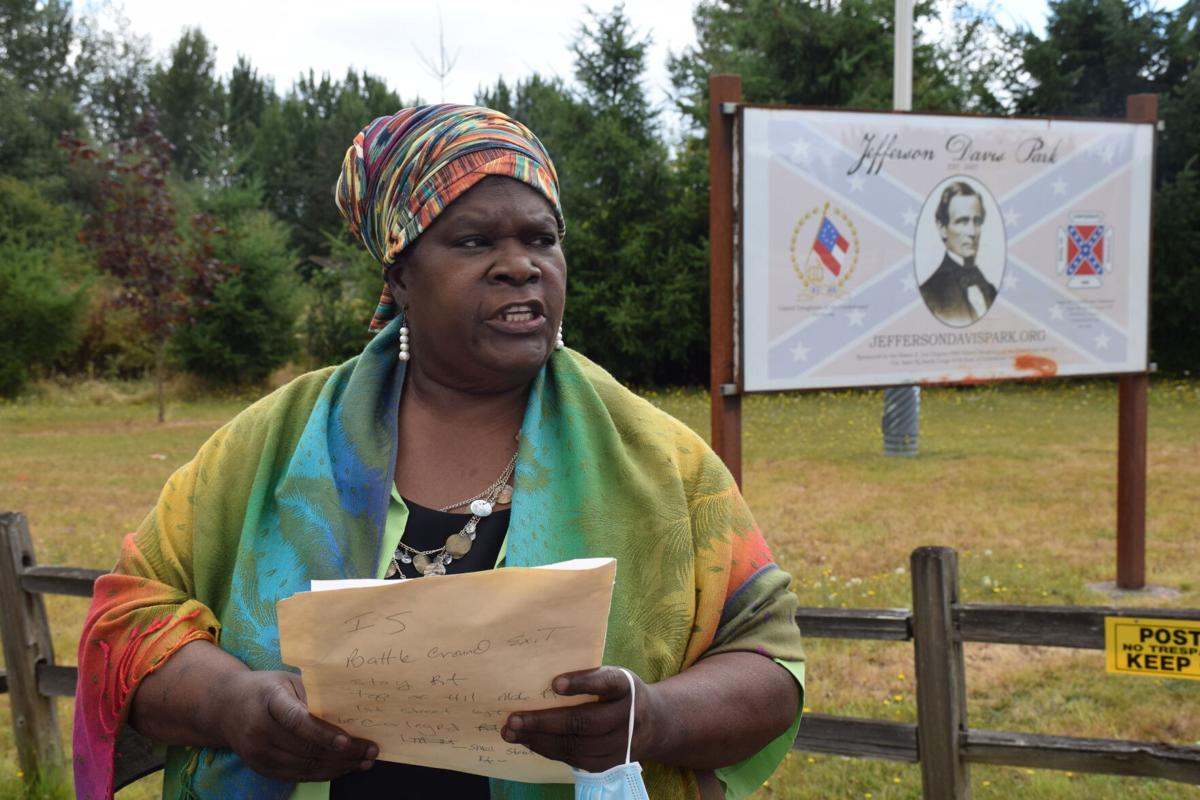 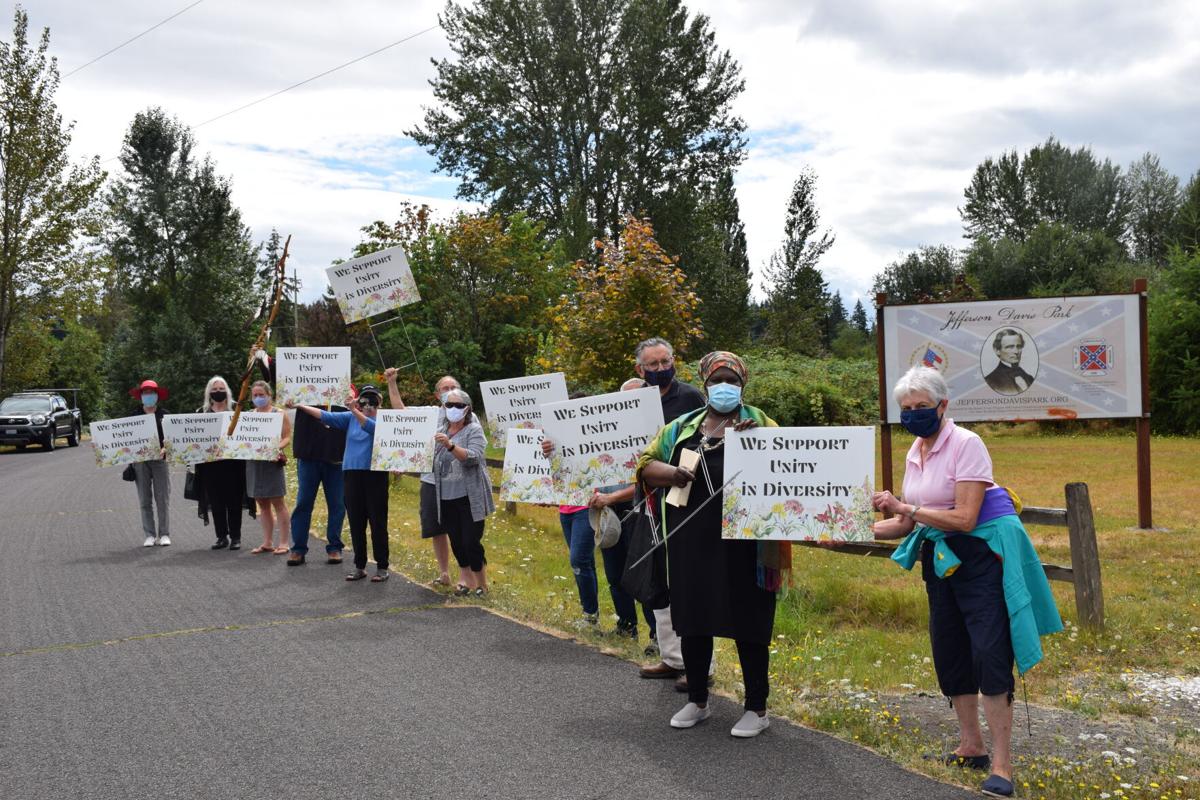 Individuals supporting a “Unity in Diversity” campaign stand with signs in front of Jefferson Davis Memorial Park, a private memorial to the Confederate president that has drawn ire for its symbolism associated with slavery.

Individuals supporting a “Unity in Diversity” campaign stand with signs in front of Jefferson Davis Memorial Park, a private memorial to the Confederate president that has drawn ire for its symbolism associated with slavery.

A group of individuals at odds with a memorial to the U.S. Confederacy near Ridgefield have organized to form a campaign under the statement of “unity in diversity,” seeking to counter the symbolism they say promotes discrimination against Black residents of Clark County.

About a dozen individuals showed up near Jefferson Davis Memorial Park Aug. 21 holding signs stating “We Support Unity in Diversity” toward Interstate 5 which the park overlooks. The park — outside of Ridgefield city limits — was purchased by the Sons of the Confederate Veterans in 2007, where a highway marker initially placed in Vancouver denoting Highway 99 as “Jefferson Davis Highway” in the 1930s was relocated, alongside flagpoles and a sign featuring a portrait of Davis.

Bridgette Fahnbulleh, president of the Vancouver NAACP, spoke briefly about what the memorial to the Confederacy meant from the perspective of history.

“I often wonder what the Union soldiers think about places like the Jefferson State Park,” Fahnbulleh said. “People flying a flag under which they died and paying honor to generals who planned their death.”

She recalled reading contemporary accounts of Union soldiers who decried the institution of slavery as a “sin,” which she said was an early concept espoused by the Black Lives Matter movement some 150 years ago.

“I want the soldiers to know that they did not die in vain; that many of us are working to

Fahnbulleh recalls first seeing the park from the interstate, doing a double-take. Its existence would come up regularly, adding she was happy to see the upswell in individuals taking a stand recently against racism.

“I’ve had people say that they moved here and were scared to death when they saw this,” Fahnbulleh remarked. “This does not represent the people of Clark County.”

Those gathered included Ridgefield and Clark County residents, with activist Elizabeth Madrigal directing the efforts of the loose coalition of individuals. Alongside the signs made featuring the “We Support Unity in Diversity” slogan, she said that ultimately the movement would like to see counter signage near the park expressing a different opinion than what she and others believe the park conveys.

“They have a right to display whatever they want as private owners, but we as a community have a right to be a bigger voice,” Madrigal said. “It’s perfectly legal, but because something is legal doesn’t make it right.”

Madrigal was one of the individuals who pushed for the highway marker to be delisted from the county’s historic registry, which it was in 2017.

“It doesn’t represent what I think is the Ridgefield community. It represents a very tiny fraction of people,” Madrigal said.

Also present was Fr. Joe Scheeler, vicar at All Saints Episcopal Church in Vancouver and drumkeeper and spiritual leader for Traveling Day Society. He said the call for unity was a chief tenet of the society.

“We sinned against them,” Scheeler said. “It’s time for more respect.”

While this can be thought of as a memorial to the U.S. Confederacy, to me it's more of an historical marker telling a story, the story of how, way out here in Washington State, a highway could be named after the Confederate president. Research it and discover history! But do we really need history? Erase all history from our books so that there will never be any conflicting views. That would of course be nonsense. Learn from history, but more importantly, respect that others have different opinions than you. Also respect private property and people's freedom to express themselves. Always remember that we would not need the freedom of speech protected in our first amendment if all speech was agreed upon by everyone, it is the purpose of it, to protect objectionable speech. Also remember that all symbols have different meanings to different people. It is called individualism.

Ms. Fahnbulleh, I understand and respect that you have strong feelings about the park. Were I of African descent, doubtless I too would be taken aback by the sight of Confederate symbols here in the Northwest. I know that many people see them as nothing but a reminder and endorsement of past and present racism. This is unfortunate, but probably unavoidable. However, for those of us whose families fought, and many of whom died, for the cause of Southern Independence (mine fought for Georgia), we view those symbols as a humble reminder of our ancestors and what they were willing to sacrifice for their beliefs and family. In short, for our heritage. We may not hold the same beliefs now, but that doesn't mitigate their bravery and selflessness to lay all they had on the altar of their convictions. I see those symbols and that park as a small acknowledgement of these virtues, and as a humble attempt to honor my family. Furthermore, the fact that Jefferson Davis made real and substantial contributions to the development of where we live now should be remembered and acknowledged. It is literally history. It is done. It cannot be changed or erased or undone, only recognized and reflected on so that we may draw what lessons we can from it, good or bad. As you note, this is private land and the displays and monuments on it are part of the diversity of which you so vociferously speak. Striving for and accepting true diversity is going to ultimately require you and the people you represent to acknowledge that not everyone is going to see the world as you do, interpret history as you do, or value the same ideas and beliefs that you do. True diversity, by definition, means having our differences. To that end, I strongly urge you to do as the SCV has done and purchase land, placing whatever monuments or symbols you hold dear on it so that all may see and you may draw comfort from it as I do every time I see the Jefferson Davis Park.