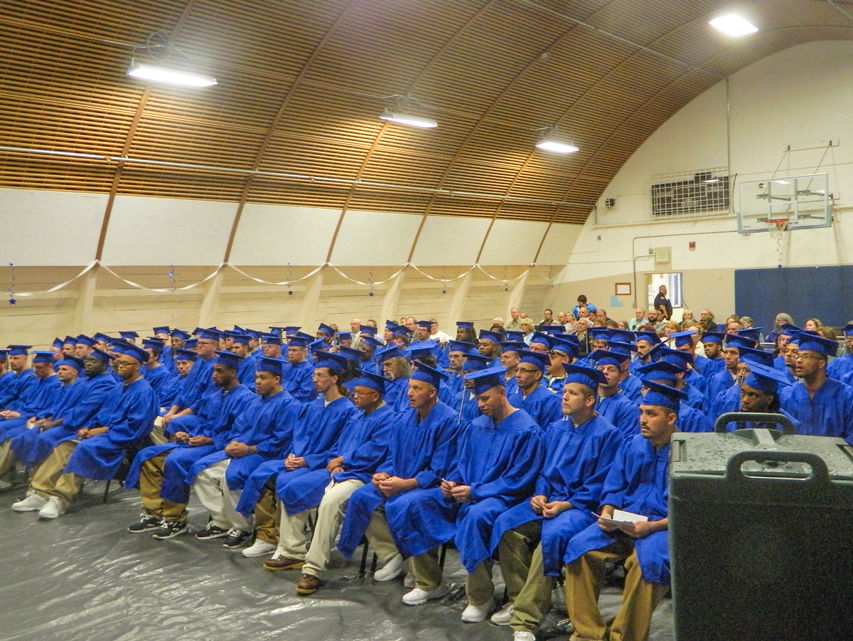 MORE THAN 100 inmates participated in the graduation commencement ceremony at Larch Corrections Center on June 17. The inmates received certificates of completion from educational programs offered through Clark College at the corrections center. 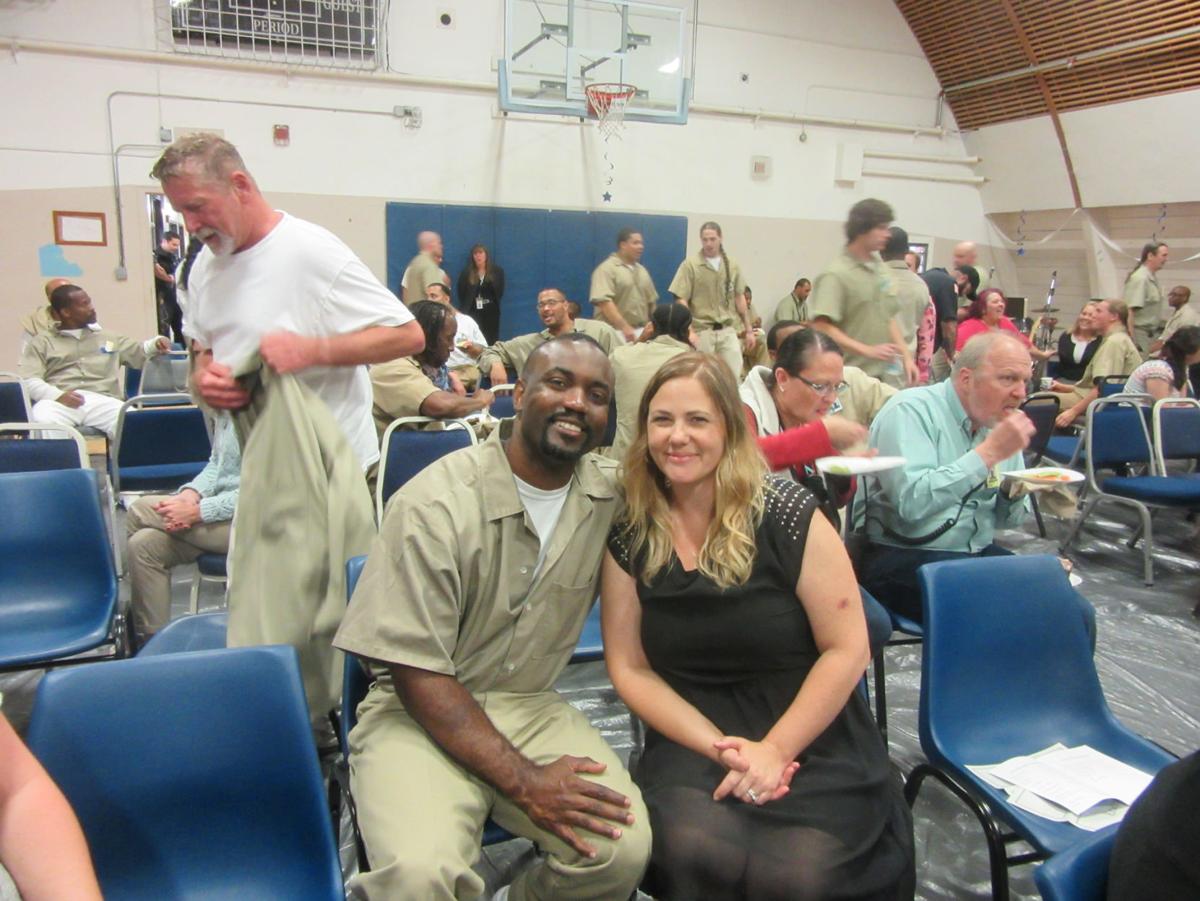 ROLAND CAMPS and his wife, RyLee Camps, visit with each other during the reception that followed the inmate graduation at Larch Corrections Center on June 17. Roland, who has been an inmate at Larch since October 2014, received a certificate of completion for the small business basics program. 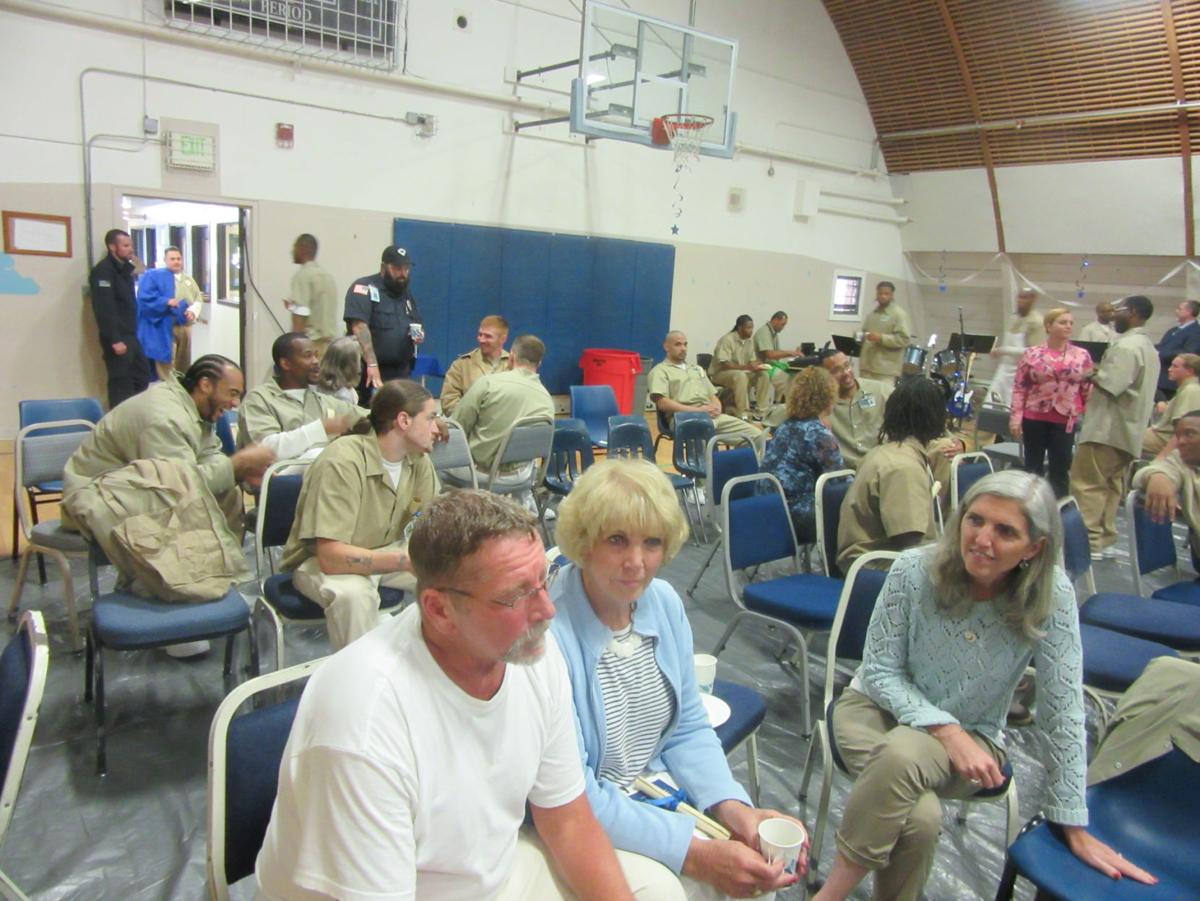 LARRY SWAN, an inmate at Larch Corrections Center, visits with family members during the reception following the inmate graduation on June 17. This particular graduation, Larry received a certificate of completion in the life skills computing program. 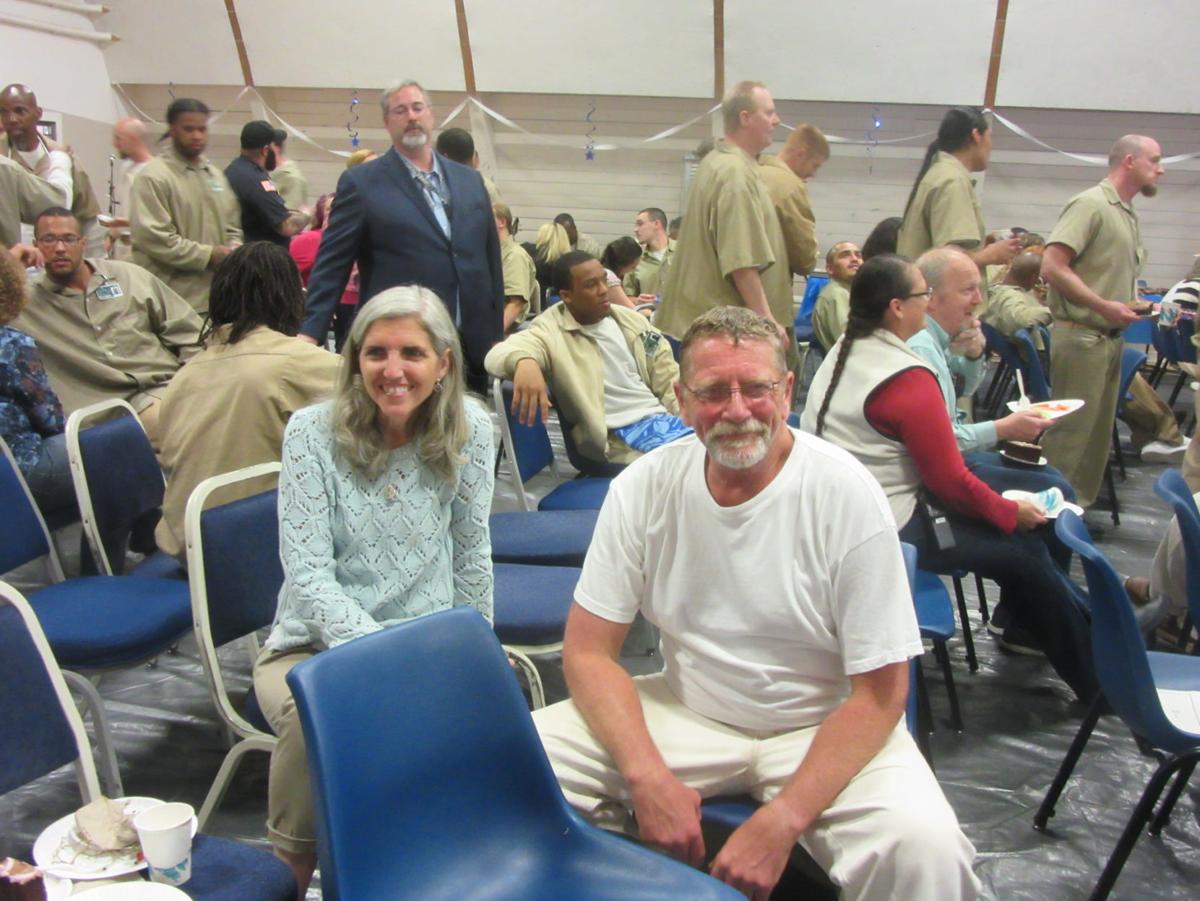 LARRY SWAN and his wife, Nancy, visit with other family members on June 17 during the reception following the inmate graduation at Larch Corrections Center. Larry is currently an inmate there and is set to be released in four months.

MORE THAN 100 inmates participated in the graduation commencement ceremony at Larch Corrections Center on June 17. The inmates received certificates of completion from educational programs offered through Clark College at the corrections center.

ROLAND CAMPS and his wife, RyLee Camps, visit with each other during the reception that followed the inmate graduation at Larch Corrections Center on June 17. Roland, who has been an inmate at Larch since October 2014, received a certificate of completion for the small business basics program.

LARRY SWAN, an inmate at Larch Corrections Center, visits with family members during the reception following the inmate graduation on June 17. This particular graduation, Larry received a certificate of completion in the life skills computing program.

LARRY SWAN and his wife, Nancy, visit with other family members on June 17 during the reception following the inmate graduation at Larch Corrections Center. Larry is currently an inmate there and is set to be released in four months.

YACOLT — Even though 42-year-old Roland Camps doesn’t particularly like drinking coffee, one of his dreams has always been to one day own a coffee shop.

“He’s just always wanted to have his own coffee shop, and it’s so funny because he doesn’t even really like coffee,” Roland’s wife, RyLee Camps, said, glancing at her husband and smiling.

As Roland talks about his dream, he and RyLee sit next to each other holding hands, surrounded by dozens of inmates at Larch Corrections Center in Yacolt and their families. Roland is one of more than 100 inmates who graduated during a June 17 commencement ceremony from one of the many educational programs offered at the corrections center through Clark College.

Roland, who has been incarcerated at Larch Corrections since October 2014 after being charged with theft, recently graduated with a certificate of completion from the small business basics program. This particular program is two quarters (10 weeks) long and covers a variety of topics needed in the business world, such as math, economics and business ethics.

“(This program) gave me a lot more one-on-one interaction with people, and this job (owning a coffee shop) will be a lot of customer service and being one-on-one with people,” Roland said.

Roland said he found out about all of the educational programs available to inmates at Larch Corrections when he saw information about it that was put up on the boards in the inmates’ units. He was interested in learning more about it and eventually decided to sign up.

“Anything he can do while he’s in here to better himself is great,” RyLee said. “I’m very proud of him.”

Roland and RyLee, who are from Winlock, have been married for 10 years and have three children — an 18-year-old daughter, a 12-year-old daughter and a 9-year-old son. Roland’s release date is currently set for February 2018, but there are programs he could possibly go through to be allowed early release.

The small business basics program is just one of many educational programs offered to the inmates at Larch Corrections Center through Clark College. Other educational programs include automotive service and brakes technician; electrical training and certification; and life skills computing. Inmates can also take part in adult basic education classes and can work towards obtaining their General Education Diploma (GED).

Larry Swan, 58, visited with his family after the June 17 commencement ceremony, having just graduated from the life skills computing program.

“I chose that one (life skills computing) because I’ve already done all of the other programs,” he said.

Larry’s family — his wife, Nancy; mom, Sallie; dad, Richard; and brother-in-law, Brent Miller — has attended all of the graduations he’s participated in for the different programs. This year, however, was the last one they will attend. Larry is set to be released in four months.

Larry was first incarcerated after being charged with theft and trafficking stolen property. He has been at Larch Corrections for the past two and a half years, and during that time has taken pretty much every education, offender change, and work and vocational program available to him.

“I’ve taken the automotive, the Roots for Success, Thinking for Change … I didn’t want to just sit around and do nothing while I was here,” Larry said. “Learning keeps the mind going. I’m retired, but all of these programs still help me read better, study better and provide me with skills.”

Larry, who is from Gig Harbor, said a few of the first things he intends to do when he is released in four months are spend time with his family and go to the gym.

“I’ve really seen him develop a lot of confidence through this program and I’ve seen him adapting and bettering himself,” Sallie, Larry’s mom, said. “He’s getting the best out of the program.”

According to Doug Helmer, director of education for Clark College at Larch Corrections, Clark has been running different educational programs at Larch for more than 20 years. Several years ago, Larch Corrections was facing the possibility of being closed by the state Department of Corrections (DOC) and lost almost all of its programs for a while.

“The DOC decided to keep the location open, so now we have even more programs and the programs are growing,” Helmer said.

Helmer said that approximately 115 inmates walked and participated in the June 17 graduation, but the initial number of inmates who received certificates this year was about 180. Also this year, Larch Corrections has 30 inmates complete their GED, which Helmer said is the most for any one DOC facility in the state this year.

The other educational programs include mostly college credit courses, including 16 credits for the automotive course, 22 credits for the business course over two terms and others. Helmer said they have plans to add six different courses to the business program, allowing participants to receive two certificates.

Helmer said he has heard numerous success stories from some of his students about inmates who previously participated in the programs. He heard from one student that an inmate who was incarcerated for several years who participated in the educational programs was recently released and is now the supervisor at a company.

Another inmate, who participated in the wastewater training and certification program at Larch, has “one of the best resumes” Helmer said he has ever seen.

“There have been some discussions about adding programs in the future,” Helmer said. “We hope to eventually branch off into other areas, possibly offer apprenticeships, etc.”

Larch Corrections Center is a facility for inmates with four years or less to serve before being released. Because of this, education is one of the components the facility offers to prepare them for another chance at real life.

To learn more about what programs are available to inmates at Larch Corrections Center, visit doc.wa.gov/facilities/prison/lcc/.

What does it take to reenter society after prison?

The Reentry Council will promote successful reentry programs for formerly incarcerated individuals and increase public safety for all Washingtonians, according to a press release. The Reentry Council was created when, earlier this year, the Legislature passed House Bill 2791, sponsored by state Rep. Eric Pettigrew, D-Seattle.

“Everyone deserves the opportunity to succeed, but the broken reentry system leaves too many men and women caught in the cycle of recidivism,” Pettigrew said. “The Statewide Reentry Council will help disrupt that cycle by creating a system that provides people the support they need to be successful in our communities. Since coming to the Legislature, I have focused on finding solutions to the revolving door of the prison system, which disproportionately affects men of color. I am excited that the Reentry Council will be focusing on this complex task.”

More than 18,000 people are in confinement in Washington state, and 95 percent will be released back into the community at some point. Approximately ⅓ will be back in prison within three years, and many others will commit new crimes and spend time in local jails. The Reentry Council will attempt to combat this trend by helping to coordinate and establish reentry programs that reduce barriers and increase access to treatment, housing, job training and employment so that individuals can become productive citizens.

The Council includes broad representation from people affected by incarceration and reentry, including people who have been in prison and organizations representing the criminal justice system, crime victims, employers and housing providers.

One of the formerly incarcerated individuals who will sit on the Council is Durell Green. Green went to prison when he was just a senior in high school. Although he now works as an at-risk youth mentor and the street outreach coordinator for Partnering for Youth Achievement, a gang intervention and prevention program in Bremerton, the process to successfully reintegrate back into the community took years and was filled with many hardships and roadblocks for Durell when he was released from prison. Green will bring his firsthand knowledge of difficulties that former offenders face to the Council.