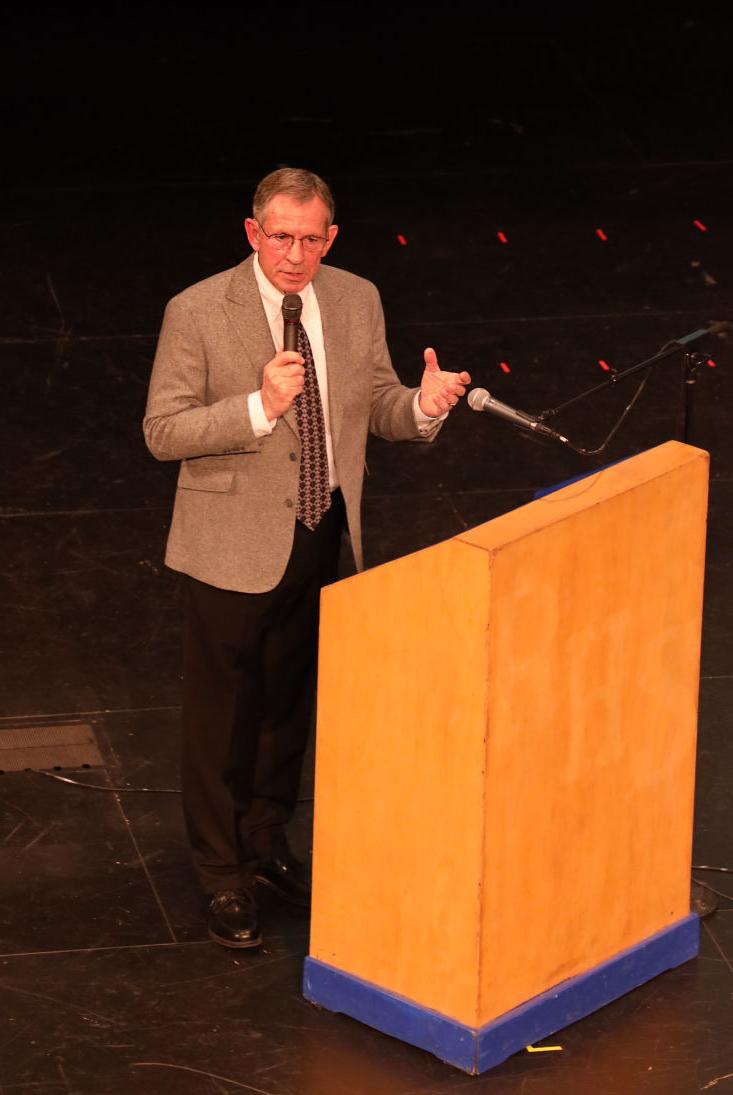 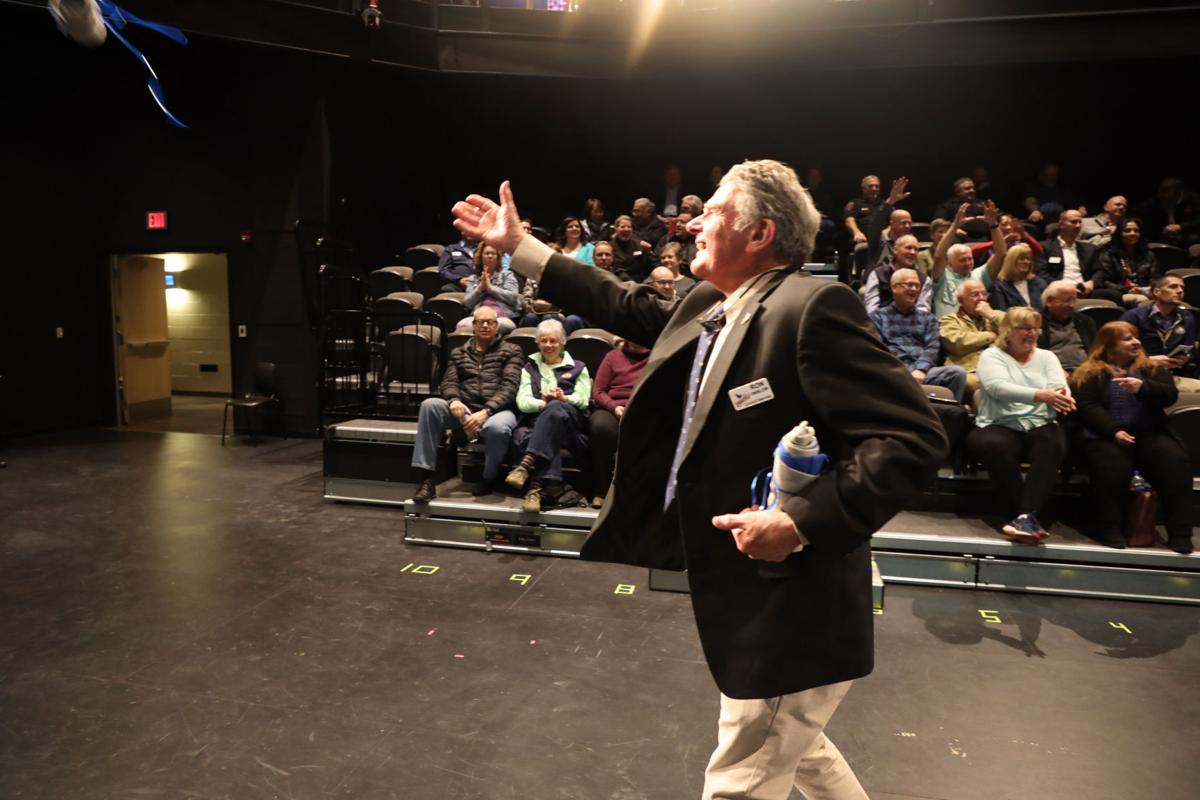 Ridgefield City Councilor Ron Onslow chucks a t-shirt bundle into the audience at the end of the State of the City address hosted at Ridgefield High School March 5.

Soon you can go grocery shopping, get a medical check-up and catch a college-level baseball game in Ridgefield.

Those developments and more were highlights of Ridgefield Mayor Don Stose’s State of the City address at Ridgefield High School March 5. In it, he rehashed 2018 and discussed what’s in store for the growing city this year.

“Welcome to the exciting future of Ridgefield,” Stose remarked toward the end of his speech. Part of his talk dealt with how fast the city is doing the welcoming — as of the event, 40 new home permits had been issued in 2019 already with 79 pending.

“We are on our way to another record year on welcoming new homeowners to Ridgefield,” Stose said. Just last year eight new housing developments broke ground.

It is the city’s goal not to have Ridgefield looking like a sea of houses, however, as Stose mentioned the city’s building standards include that 25 percent of a development must be dedicated to open space, often becoming parks and trails.

It’s not just houses going up in the city, as the coming year has recreation, commercial development, and infrastructure in the works. Those driving into the event likely noticed one of Stose’s focuses in his speech as athletes were practicing on the fields of the Ridgefield Outdoor Recreation Complex, a joint venture between the city and the Ridgefield School District set to be a key player in defining the community starting this year.

The complex, known as the RORC, features six athletic fields and a community room available for rental. Stose said that the total cost for the RORC was more than $20 million, adding that funding for the project was “100 percent” from fees on new development in the city.

“RORC will be a place for all citizens of Ridgefield to have fun,” he said, mentioning the Ridgefield Raptors, a wood-bat baseball team that will have the first game of their inaugural season June 4.

Joining the city’s recent additions bearing acronyms, Stose talked about the Ridgefield Administrative and Civic Center (RACC). Much like the RORC, the center is a joint project between the city and school district, featuring business-oriented service departments for the former and administrative offices for the latter, among several other tenants.

The city’s partnerships don’t stop with the school district as Stose mentioned the Wisdom Ridge development, a project by the Port of Ridgefield on land near the new Washington Department of Fish and Wildlife building that could serve as a potential new home for city’s Public Works Department and the school district’s maintenance operations.

Stose talked about the city’s support of the Ridgefield National Wildlife Refuge, mentioning the city received the inaugural “Spirit of the Wild” award from the refuge’s fundraising organization for their efforts.

Stose mentioned that city council meets with National Wildlife Refuge Program officials every year during their annual visit to Washington, D.C. where they ask for funding for a new visitor center. He was proud to announce that the federal government recently had put together a multi-year funding proposal for a new facility.

Ridgefield’s 2019 goals include keeping the community healthy, as Stose said the city will welcome Vancouver Clinic this year with an official opening date set for Aug. 5. He also brought up plans for a new police station that could break ground toward the end of this year at a development on the corner of Mill Street and Main Avenue.

Other plans for growth included higher education, as Stose explained the Clark Regional Wastewater District awarded a $2.4 million contract to build the Ridgefield North Junction Sewer Project last year which will extend the utility to about 1,000 acres including land planned for Clark College at Boschma Farms.

Stose said the city council had worked “very closely” with the college in bringing the campus to Ridgefield, which has been a struggle to secure funding for. He mentioned that last year the state legislature had told them there wasn’t the money available in order to get the project moving.

“Unfortunately they said the wrong thing to this city council,” Stose remarked, explaining it only worked to redouble their efforts. This year the city will continue to work toward making the campus a reality, telling college president Bob Knight, who was in attendance, that he had the city’s commitment.

Just south of the planned satellite campus will be Ridgefield Crossing, a project that’s scheduled to begin this year. The development, located to the southeast of the Pioneer Street and South 65th Avenue roundabout, will feature a hotel and restaurant.

On the other side of Interstate 5, Stose said the city will welcome Pioneer Village in 2019, a mixed-use development on the southwest corner of the Pioneer Street/Northwest 45th Avenue roundabout featuring a 300-unit apartment complex and commercial center separated by a 10-acre park. He mentioned that Vancouver-based Trapdoor Brewing will open a location at the village, being the first business to sign a lease at the new development.

Stose gave attention to Ridgefield’s burgeoning business scene as he mentioned the city welcomed businesses in real estate, insurance, mortgages, brewing and the arts in 2018. Last year the Ridgefield Chamber of Commerce formed with 40 members in June — Stose said in its first six months the chamber grew to 87 members.

But the biggest business announcement for the city was the addition of a full-fledged grocery store. Last year the Port of Ridgefield approved plans for Spokane-based Rosauers to set up shop on port land, with an opening planned for this fall.

“When Rosauers opens, we are going to have in Ridgefield the largest tailgate party that anyone has ever seen in Southwest Washington,” Stose said.