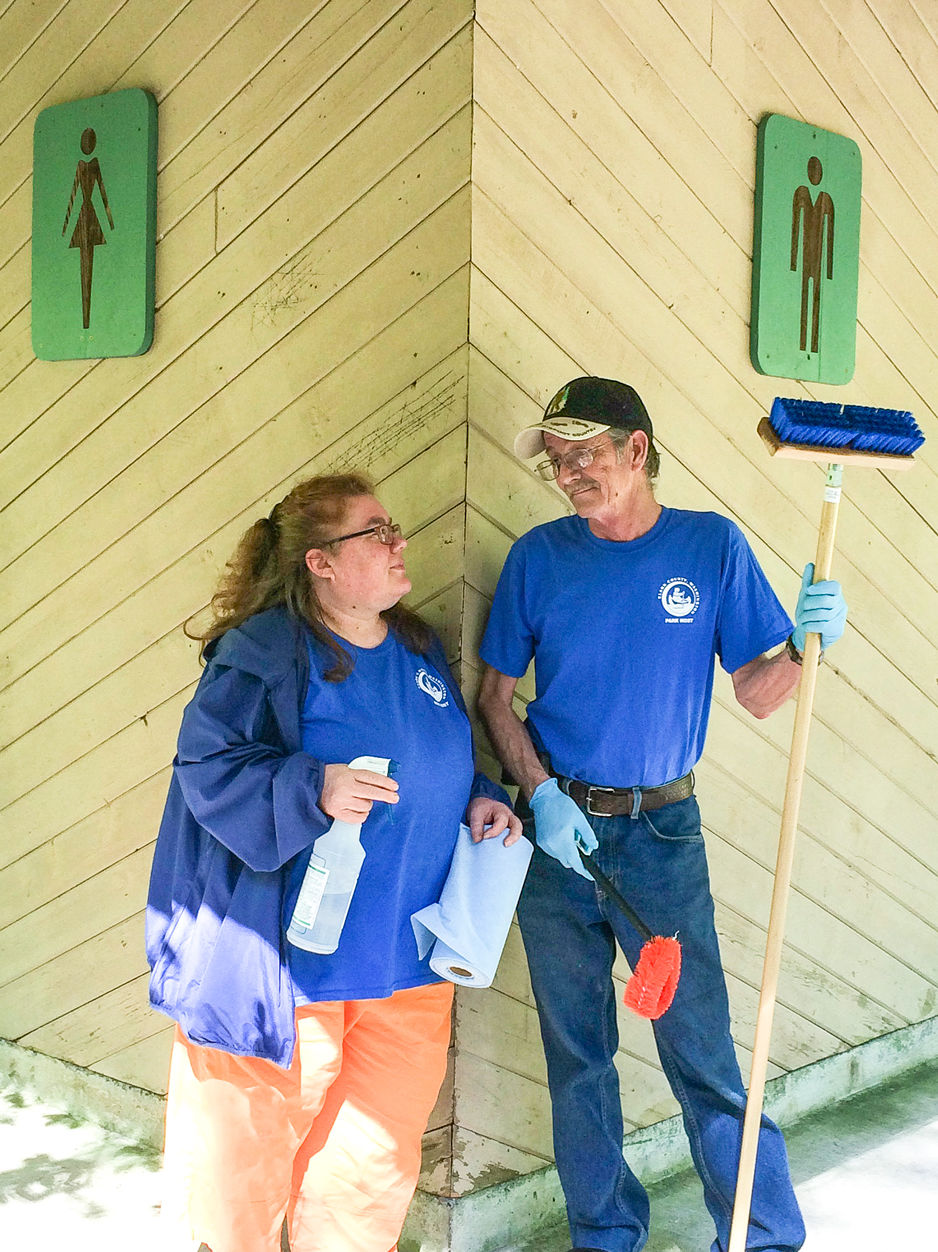 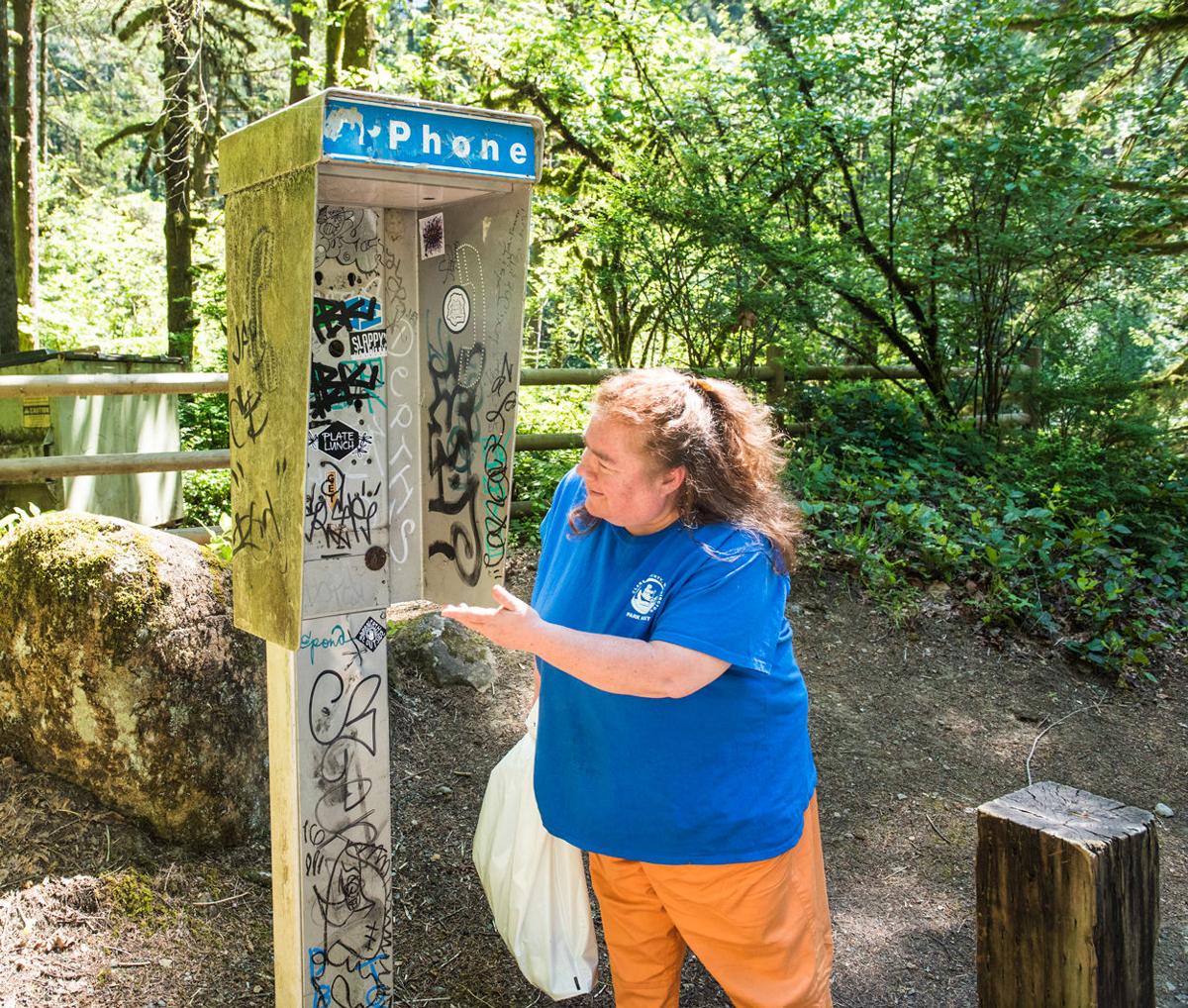 REBECCA HOUSTON, park host at Moulton Falls County Park, points out an abandoned phone booth in the park that she would like to spruce up. It is tangled in old bureaucracy though – it is phone company property, but the phone company is no longer in business. 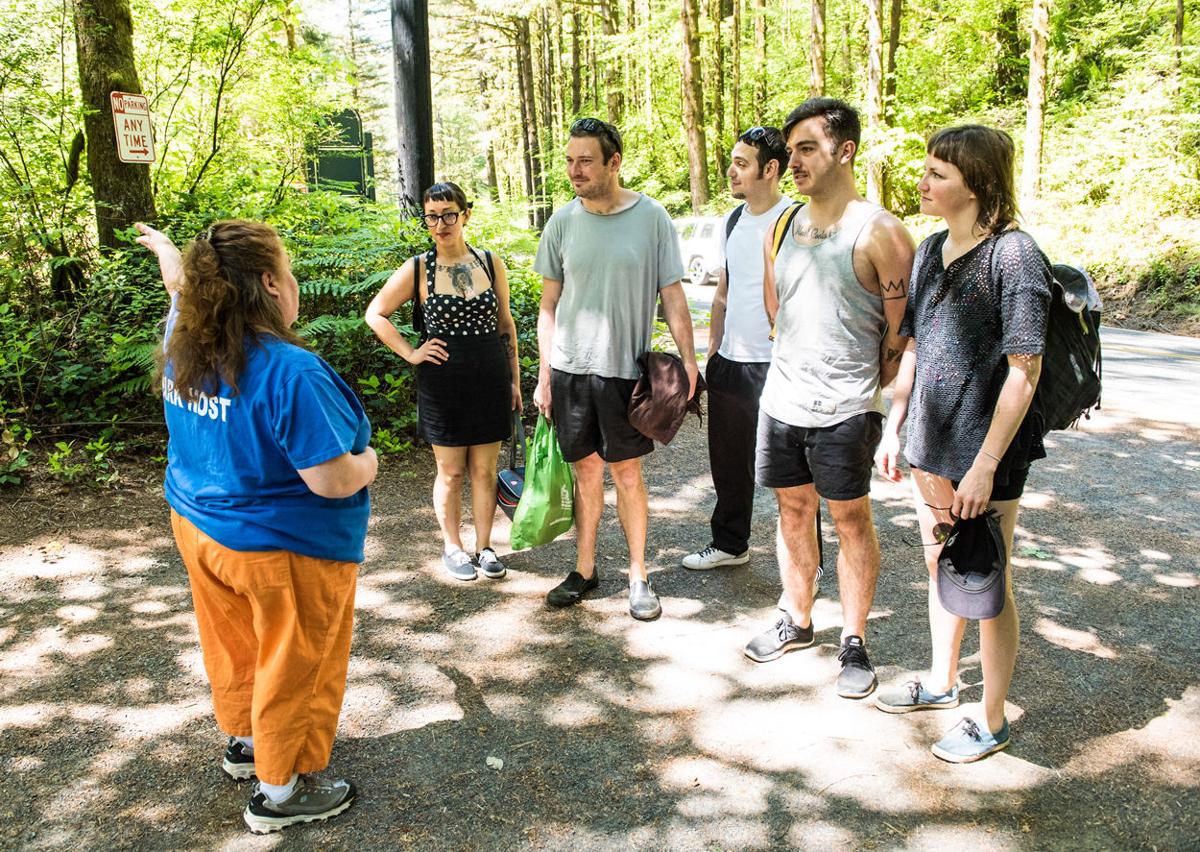 ONE OF THE best parts of the job for Rebecca Houston, on left, park host at Moulton Falls County Park, is welcoming visitors and helping them to have a great time. Here she offers directions to (from left) Anna Holly, Price Robideaux, Richard DiNenna, Andy Buchanan and Amber Mahvash, all of Portland. 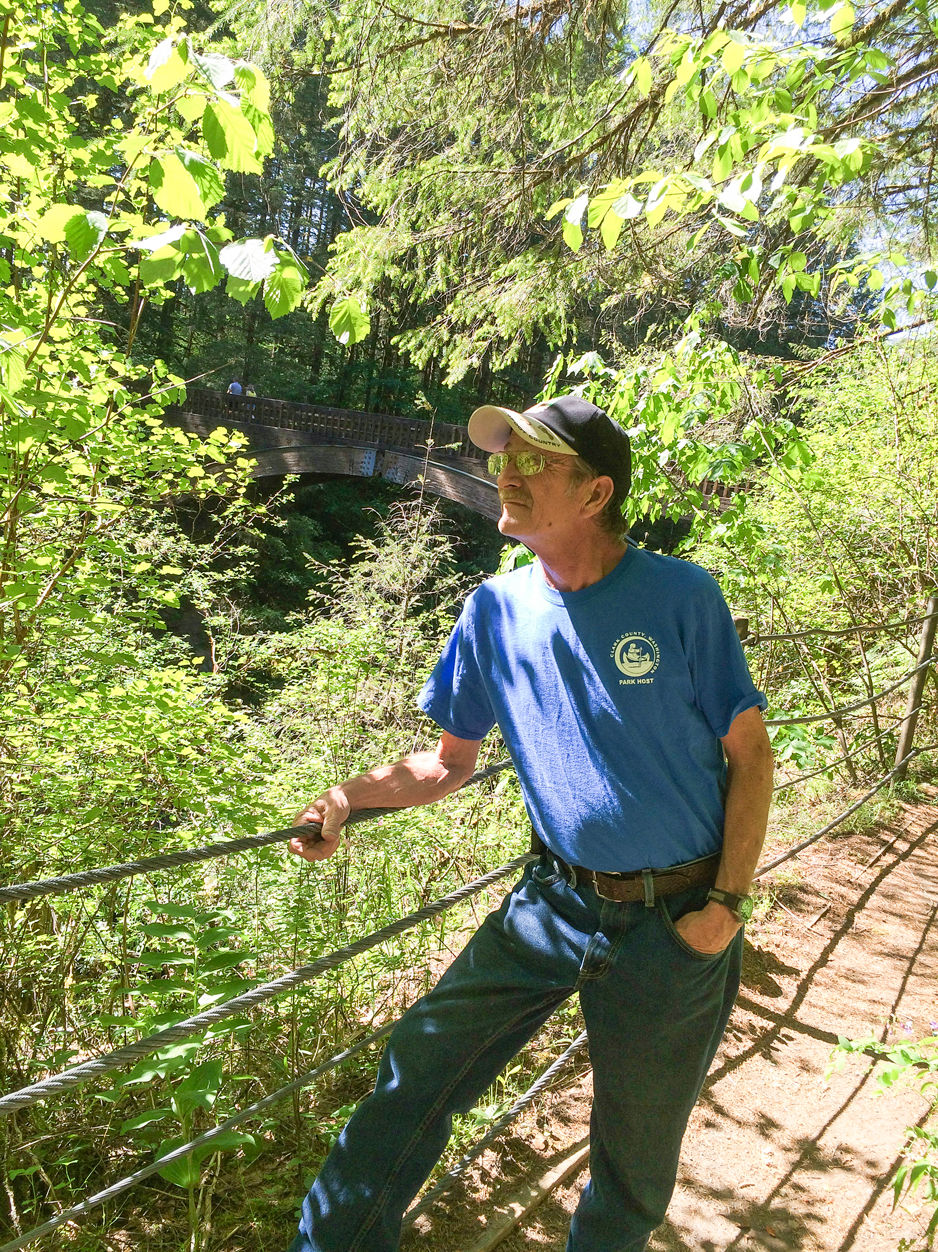 JAY HOUSTON, park host at Moulton Falls County Park, loves coming home to the beauty surrounding them at the park.

REBECCA HOUSTON, park host at Moulton Falls County Park, points out an abandoned phone booth in the park that she would like to spruce up. It is tangled in old bureaucracy though – it is phone company property, but the phone company is no longer in business.

ONE OF THE best parts of the job for Rebecca Houston, on left, park host at Moulton Falls County Park, is welcoming visitors and helping them to have a great time. Here she offers directions to (from left) Anna Holly, Price Robideaux, Richard DiNenna, Andy Buchanan and Amber Mahvash, all of Portland.

JAY HOUSTON, park host at Moulton Falls County Park, loves coming home to the beauty surrounding them at the park.

“The stars were in alignment.” That’s how Rebecca Houston describes the job she shares with her husband, Jay Houston, as volunteer park hosts at Moulton Falls County Park.

Until 2015 the couple was living in southern New Mexico in a mobile home on a small plot of desert land where they had raised their children. Once their nest was empty, they were ready for a change.

“We didn’t know how or where, but we knew we were going to go,” said Rebecca. When a bit of money dropped into their hands and they spotted an RV for sale, they knew they had their first step.

Jay and Rebecca pulled out a map of the United States, and each marked a big “X” across states where they did not want to live. When they were finished, there was a swath of unmarked country in the Pacific Northwest.

“How about Washington?” asked Jay, and their direction was set.

Jay was an employee of the U.S. Postal Service, and in January 2015, he was able to transfer to the post office in Camas. They hit the road with their camper in tow.

“We’re kind of explorers. We check out everything in the area,” said Rebecca.

Once they settled into the Camas area, they started looking around. They stumbled onto Fallen Leaf Park, where they met the park host there. Jay said to him, “That sounds like a great job. Can you introduce me to your boss?”

After an interview with a half dozen county staff, background checks and more than a little waiting, they were offered a position. They had visited each park, and knew immediately that Moulton Falls County Park was where they wanted to be.

The Houstons moved into a two-bedroom cabin tucked behind the lower parking lot on Sept. 28, 2015. They pulled in with their camper and a single furnishing – a freezer loaded with 30 pounds of New Mexico Hatch green chilis.

“Goodwill got a lot of our money,” said Rebecca. Jay’s co-workers at the post office offered a used couch and recliner, and they were ready to start over.

The Houstons are considered “compensated volunteers” in their park host role. They receive rent and utilities for the small cabin along with a supply of firewood for the wood stove. In exchange, at least one of them is at the park for most of 24 hours, seven days a week, 365 days per year.

Their duties include walking every step of the 2.6 miles of trails every day to check for trash or vandalism, emptying trash cans, opening and closing parking lot gates and cleaning the public restrooms.

The park is mostly Rebecca’s job. Jay has a small pension from his almost 21 years of Air Force service, but he still needs to work to make ends meet. He drives a school bus for Battle Ground School District, which leaves plenty of time for them to enjoy their beautiful surroundings at home. Jay will walk onto their small deck next to the river and say happily, “Look at where we are.”

The day starts with opening park gates at 7 a.m., and doesn’t end until they are locked up again at dusk, which can be 9 p.m. or later in the summer. Rebecca hikes the same route through the park’s winding trails each day, checking for litter and damage. She knows the spots where people like to pause with a cigarette, and leave the butts on the ground. The public restrooms require attention at least daily. With the weather warming up and more people visiting the park, Rebecca plans to add a second cleaning mid-day.

It’s a big role for a volunteer, but Rebecca wouldn’t have it any other way.

“This job has stuck on me so much I can’t go to the grocery store without seeing trash and wanting to pick it up,” she said.

Jay and Rebecca like to offer some special “extras” for the people who visit the park. When the upper parking area and restrooms opened for the spring, Rebecca had a “spring celebration.” She set up a table in the lower parking lot where she offered bottled water, candies, party favors and dog biscuits.

Visitors could participate in a special craft project, too. Rebecca had brought white New Mexico sand to the northwest with her for crafts. She dyed it in a rainbow of colors and offered each guest a scoopful, with instructions to make a wish and pour it in a jar. She ended up with three brightly colored jars of colorful sand and good wishes.

When she walks the park each day, Rebecca is ready with dog biscuits and scoop bags for visitors with dogs.

“My goal is to make this park a favorite place to visit. Make it a fun place where people want to go,” she said.

She enjoys getting to know the many regular visitors to the park. One man has been hiking there for 20 years, and told her about a picnic area that had become so overgrown she didn’t realize it was there. Another visitor shared stories of helping to build the high bridge over the river when he was 15 years old.

One of the challenges is park visitors who are drinking and partying.

“The younger they are the more disrespectful about it they are,” said Rebecca. Teens like to jump off the high bridge into the water, which is against park rules and dangerous. And they don’t like to be told to stop. “What are you going to do about it?” one asked defiantly. But Rebecca is concerned about the danger to them.

They asked county staff how long they would be able to stay in the position, and were told, “You may not want to stay.” “Are you kidding?” said Rebecca. “I want to die here.”

Rebecca feels a special connection in the park, she said.

“You cannot hurt in the park. You can’t be angry. The trees and the nature make everything better.”