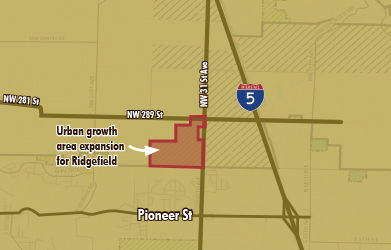 The roughly 111 acres of an urban growth area boundary expansion for the city of Ridgefield that has been deemed non-compliant by the state Growth Management Hearings Board which Clark County is challenging in court. 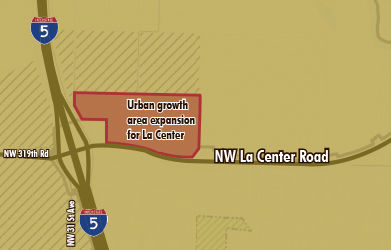 The roughly 56.5 acres of an urban growth area boundary expansion for the city of La Center that has been deemed non-compliant by the state Growth Management Hearings Board which Clark County is challenging in court.

Clark County has extended an ordinance affirming growth boundaries for two North County cities as it waits to see what two judgments on issues with its most recent growth plan will be.

The Clark County Council approved an extension of an April emergency ordinance unanimously during their June 4 meeting. The ordinance is a “re-enactment” of urban growth area expansions for Ridgefield and La Center that were included in the county’s 2016 Comprehensive Growth Management Plan update.  Those expansions have been deemed non-compliant by the state Growth Management Hearings Board (GMHB), a quasi-judicial government board that looks at cases such as comprehensive plan updates.

The growth area expansions were the inclusion of about 111 acres north of Ridgefield city limits on the west side of Interstate 5 and about 56.5 acres north of La Center city limits adjacent to I-5’s east side. The ordinance states that since the comprehensive plan update was approved by council in June of 2016, both cities had formally annexed those lands into city limits. In the case of La Center, there were no legal challenges against the annexation, whereas challenges against Ridgefield had been dismissed in court.

The ordinance is one component of larger issues with the 2016 comprehensive plan update. Currently, the county has its GMHB case alongside one in the state Court of Appeals regarding the update. Clark County Community Planning Director Oliver Orjiako said at the meeting there was a compliance hearing with the Growth Management Hearings Board May 31.

Orjiako said it was his understanding the board would issue a decision within 45 days of the hearing. The Court of Appeals case is set for its own hearing July 3, he added.

Orjiako recommended council extend the ordinance by six months in order to see what both the GMHB and the court of appeals determined. Clark County Deputy Civil Prosecuting Attorney Christine Cook said that letting the ordinance expire or be repealed would “change the status” of the county’s efforts to comply with GMHB orders.

“At this point the county has argued that it has taken a good-faith attempt to respond to the growth board’s urging the county to re-adopt or revise the (urban growth areas),” Cook said. Letting the ordinance expire could call into question that good faith.

Though a favorable ruling in either of the cases would fall in line with the ordinance’s intent, Orjiako noted that in that situation council could rescind another ordinance regarding the growth plan — a moratorium on development in a Rural Industrial Land Bank. The land bank is about 600 acres of agriculture-designated land in Brush Prairie the county has eyed for industrial uses. The county’s placement of a land bank overlay was one of the other ways the growth plan update was found to violate state law by the GMHB.

The GMHB case was brought about by challenges from several groups, including local property rights group Clark County Citizens United and environmentalist groups Friends of Clark County and the more regional Futurewise. Cook referenced a letter from Futurewise Attorney Tim Trohimovich claiming the county did not give timely notice regarding the ordinance, which she refuted, saying notice had be posted for “quite some time.”

She conceded two typographical errors were in the notice, but “those were not GMA violations” — one was a misspelled email address for herself and another was a word missing from a link she said was correctly printed elsewhere in the notice.