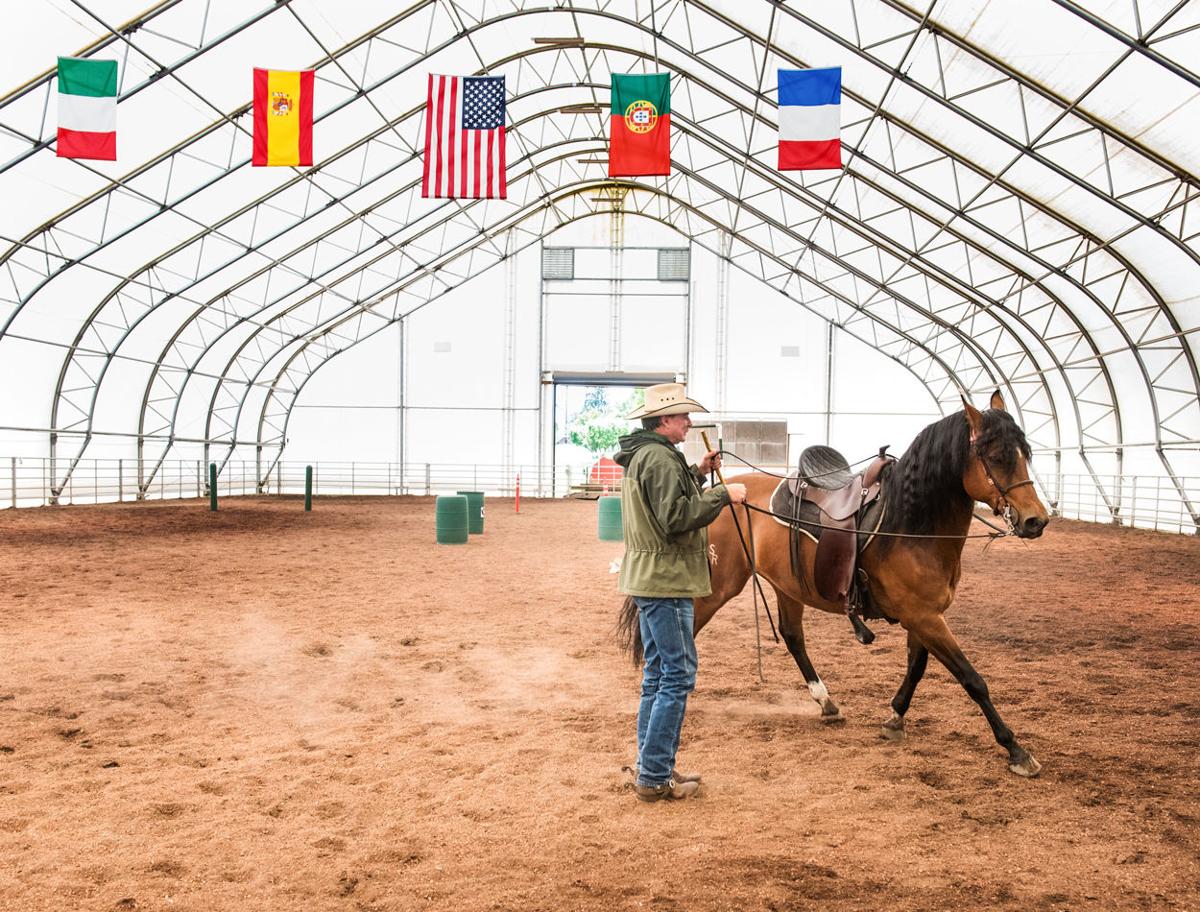 ROB ZIMMERMAN of South Ridge Farms begins each training session with his Morgan gelding Captain Jack by working with him on the ground. 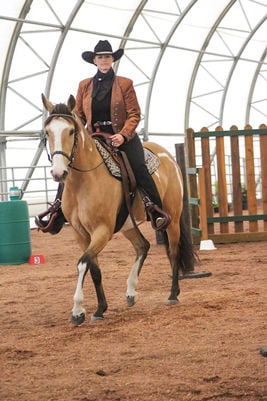 AT A WORKING EQUITATION competition at South Ridge Farms in May, Donna Luoma of Oregon City, Oregon, rode her Lusitano/Paint cross Leelu in Western attire. 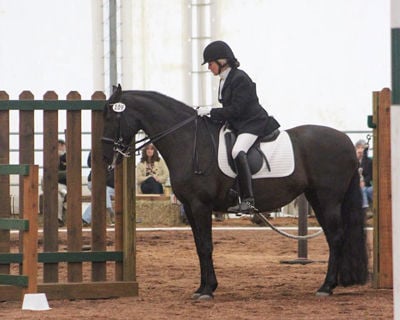 BETSY WESMAN of Camas maneuvered her Andalusian Baronesa through a gate obstacle at a recent working equitation competition at South Ridge Farms in Ridgefield. 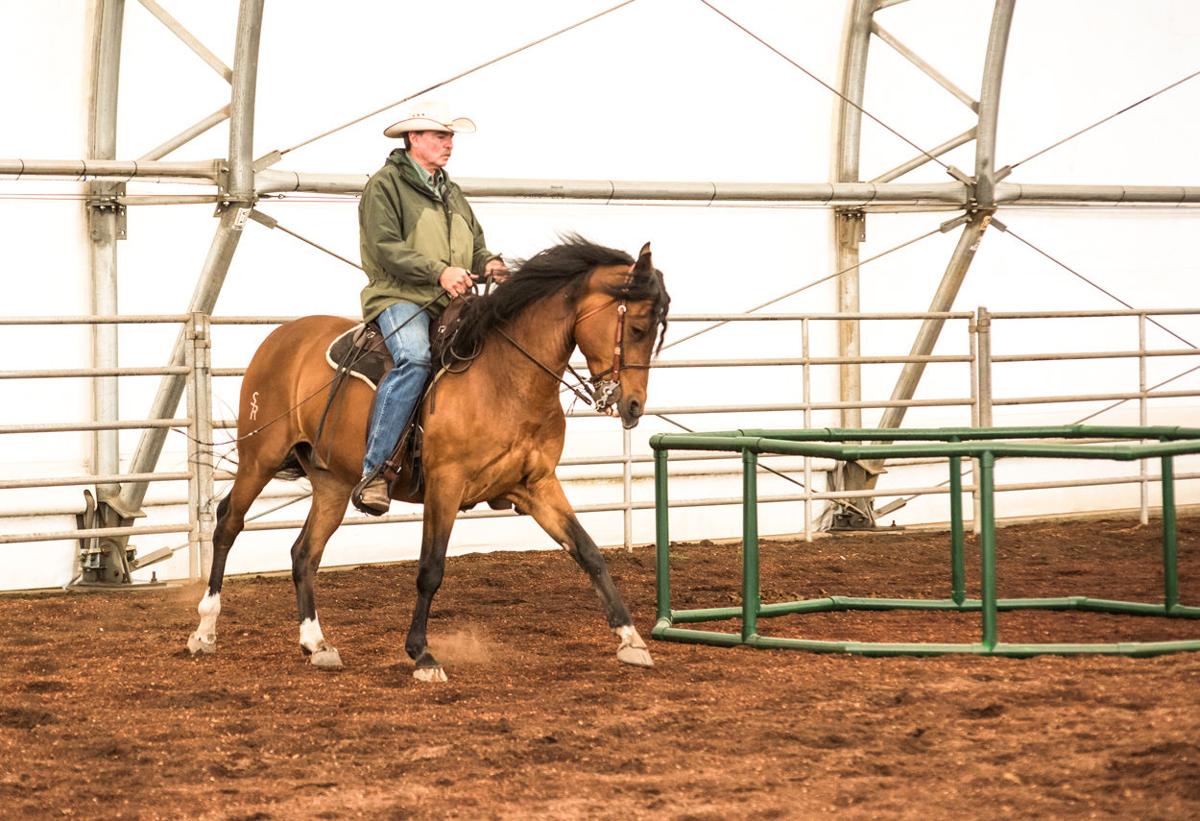 ROB ZIMMERMAN of South Ridge Farms in Ridgefield demonstrates one of the obstacles for a working equitation on his Morgan gelding Captain Jack – a round pen that the horse must canter a small circle around.

ROB ZIMMERMAN of South Ridge Farms begins each training session with his Morgan gelding Captain Jack by working with him on the ground.

AT A WORKING EQUITATION competition at South Ridge Farms in May, Donna Luoma of Oregon City, Oregon, rode her Lusitano/Paint cross Leelu in Western attire.

BETSY WESMAN of Camas maneuvered her Andalusian Baronesa through a gate obstacle at a recent working equitation competition at South Ridge Farms in Ridgefield.

ROB ZIMMERMAN of South Ridge Farms in Ridgefield demonstrates one of the obstacles for a working equitation on his Morgan gelding Captain Jack – a round pen that the horse must canter a small circle around.

After a lifetime spent in a sport, sometimes it seems as if there is nothing new ahead.

For trainer Rob Zimmerman of South Ridge Farms in Ridgefield, he was ready for a change after years of training horses for ranch work and reining. Zimmerman was disillusioned with what he saw as “throwaway horses,” horses who are started young and pushed so hard they break down physically and mentally.

“I liked my horses too much to push them that hard,” Zimmerman said.

In his work with Western performance horses he had become intrigued with the Iberian horses from Spain and Portugal, precursors to the American cattle horse. He ran across an online video of Pedro Torres of Portugal, the European Champion of working equitation, and knew immediately, “That’s what I want to do.”

An introductory clinic in working equitation was being held soon afterward in Eugene and he eagerly arranged to attend. Hooked, Zimmerman scheduled a clinic at his own Ridgefield barn and began a focused study of the new discipline.

Now, South Ridge Farms is the headquarters for the Pedro Torres Academy USA. They host clinics with Torres student Nuno Matos, and held their first working equitation competition in May, a show that drew riders from as far as 900 miles away.

Zimmerman is a little dismayed by his prominence in the U.S. development of the sport.

“To me, I’m just a dirt clod from Idaho,” he said in disbelief. “And yet, I’m working with the best people in the world. I’ve learned so much from their methods.”

Many aspects of working equitation resonated with Zimmerman.

“I love the training techniques. They are very fundamental, building block style,” he said.

An advanced working equitation horse can do all the dressage movements. Horses are trained at a pace in line with their maturity, and not rushed.

“You can’t even show a horse until he’s 4,” Zimmerman said. The horse can’t be shown at advanced level until it’s 6 years old, or at master level, the highest, until it’s 7. “That’s why they last,” said Zimmerman. “It’s the only competitive sport I know where horses can compete into their 20s.”

Zimmerman looks for two qualities when he is evaluating a prospect for working equitation – that it’s “good-minded,” and that it has a good canter. He describes a good-minded horse as one who is brave, willing, enjoys working, enjoys the relationship between the rider and the horse, and listens well. The canter is important because at the advanced levels the entire competition is ridden at a canter.

Zimmerman loves the softness and lightness of a good working equitation horse, saying it will strive to “do it for you.” The horse is not submissive, but is a willing partner who knows what you want and offers it. The horse and rider are very tuned into each other, he said. A good working equitation pony is very broke, “To me they are the best broke ponies in the world.”

There is truly a bond between the rider and horse, he said. They are team oriented.

“That’s the courage part I look for in a horse,” Zimmerman said. “If he’s not bold he won’t want to do that.”

He described the bravery of the classical Portuguese and Spanish fighting horses as an example.

Zimmerman said the concept that was new to him was the dressage principal of working from the inside leg to the outside rein. He was accustomed to riding with a loose rein, and had to adjust to using a shorter rein. But the goal of lightness and softness is the same, he said. And as the rider becomes more advanced, the aids are given more with the seat.

Susan McIntosh is a working equitation student of Zimmerman’s. She rode her Friesian stallion in dressage and exhibitions before she discovered the new sport. She said her horse seemed bored with being asked to perform the same tricks and routines day after day, but he perked up when they began working equitation.

“The horse is engaged,” she said. “It always changes and it’s always fresh.”

Working equitation was developed in southern Europe in the 1990s as a way to promote and preserve the riding styles of Portugal, Spain, France and Italy as they were used in ranch and field work, and made its way to the U.S. in 2009. Riders can compete on any breed of horse, using the tack and attire of any discipline.

Working equitation competitions offer five levels of training – introductory, novice, intermediate, advanced and masters. The masters’ level is the international standard of the sport. Each competition takes place in four phases, or trials.

The dressage phase incorporates a pre-determined dressage test at the appropriate level, and is judged by the same standards as a traditional dressage test.

The ease of handling phase incorporates 12-14 obstacles which must be completed in a predetermined order, but riders have some discretion in how they navigate the course. Riders do not see the obstacles or test requirements until the day of the show, so part of the challenge is to quickly memorize it and determine each horse’s strengths in how to complete the test.

Horse and rider are judged on the harmony and skill which they demonstrate, and can gain extra points by demonstrating a higher level of skill in their ride. For example, if an obstacle requires a simple change of lead and the rider uses a flying change, they can receive extra points in that phase. Zimmerman described this phase as “super smooth,” since the movements should blend together harmoniously.

The third phase, speed, is timed.

In a team competition there is a fourth phase, the cow trial. A team of three or four riders individually sort, cut and herd a pre-selected cow from the herd and then as a team put it in a designated pen.

“People tackle the obstacles in different ways,” Zimmerman said. “It’s a thinking man’s game.” This allows the rider to play to their strengths.

“It’s kind of like pool,” he said.” You are always setting yourself up for the series of obstacles, not just the next one.”

Working equitation is a sport for all ages. At a recent show at South Ridge Farms, the oldest rider was 73 years old and the youngest was 13. Youth classes are for ages 8-13, and 13 and older.

Zimmerman offers lessons and horse training in working equitation at South Ridge Farms, in addition to ongoing clinics with the Pedro Torres Academy. South Ridge Farms will host their next competition on July 9.