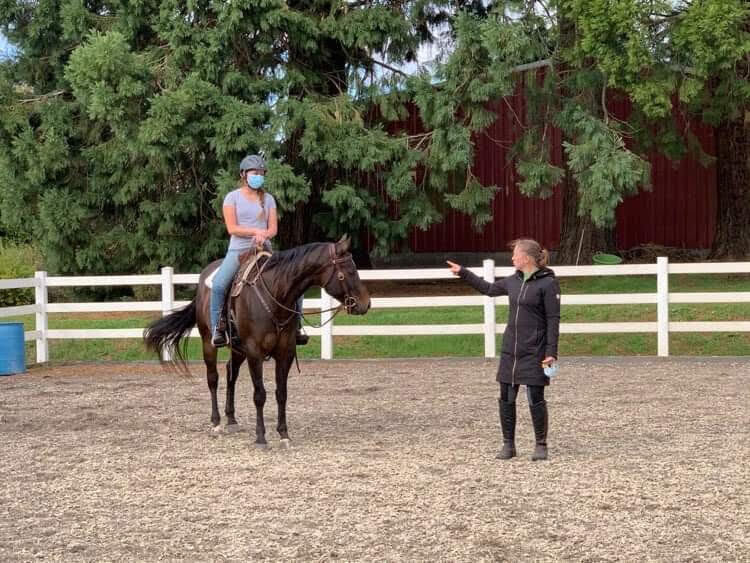 Much of Jocelyn Ehlers’ teaching style revolves around building a strong foundational relationship between rider and horse. 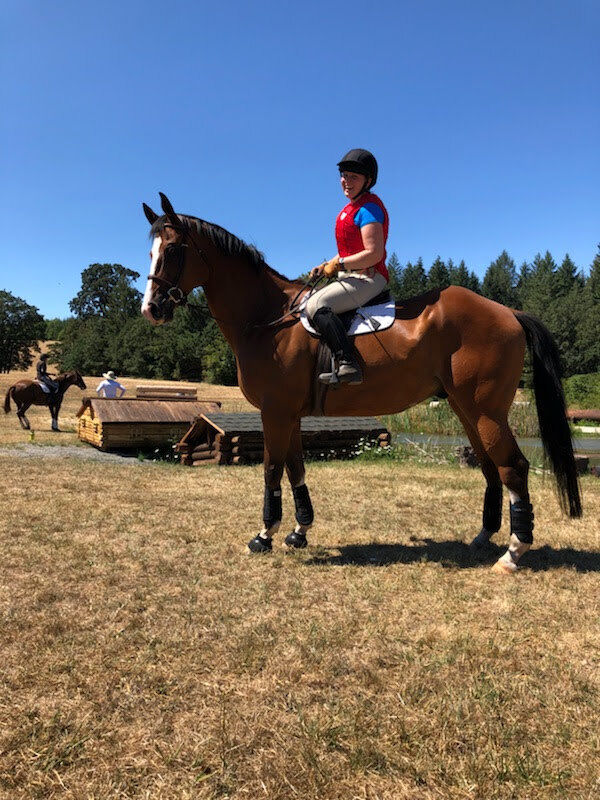 Jocelyn Ehlers is a horse trainer and teacher at Quarry Ridge Farm in Battle Ground. She also offers personal lessons all over the Pacific Northwest. 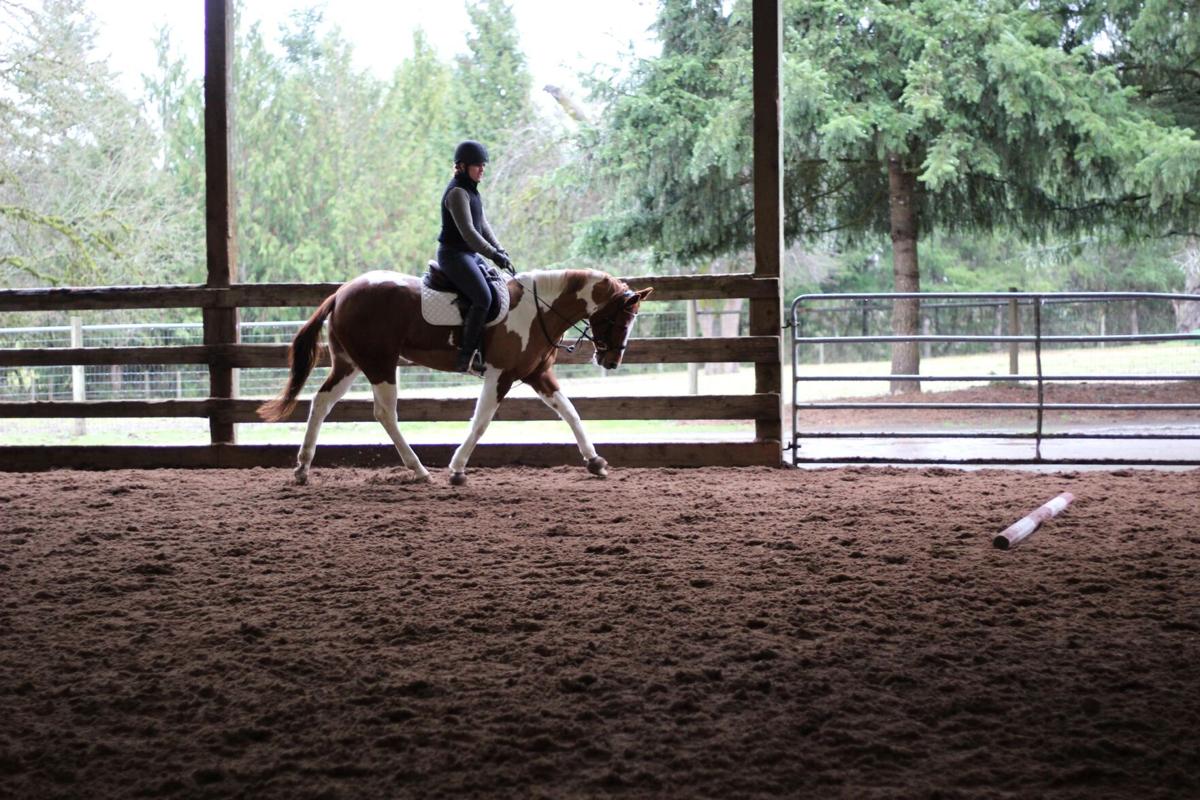 Jocelyn Ehlers works on the basics of groundwork with clients to build a strong emotional bond.

Much of Jocelyn Ehlers’ teaching style revolves around building a strong foundational relationship between rider and horse.

Jocelyn Ehlers is a horse trainer and teacher at Quarry Ridge Farm in Battle Ground. She also offers personal lessons all over the Pacific Northwest.

Jocelyn Ehlers works on the basics of groundwork with clients to build a strong emotional bond.

Jocelyn Ehlers has been around horses since she was first able to walk and talk.

As the youngest of three siblings and the only daughter of a mother who was involved in the equine community, Ehlers said she was “born with the equine bug” and it took off from there.

When she was around 15 months old, she got on a horse for the first time for a photo opportunity. At 6-and-a-half, Ehlers began to take riding lessons from an instructor near her home.

Born and raised in Newberg, Oregon, Ehlers grew up in a rural part of the Portland suburbs. Living on the outskirts of town, Ehlers was just a seven-minute drive from her riding instructor, and she spent as much time as possible on the farm and in the barn.

“There’s only been two periods of my life where I wasn’t riding horses,” she said. “Once when I was 9 for a couple of months and once right after college during the 2009 recession.”

There isn’t a single part of horse ownership and riding that Ehlers doesn’t like.

She explained how when she was taking lessons as a child, the instructor would always ask what her favorite part of being on the farm was and Ehlers would always respond with “all of it.” Ehlers finds “peace and comfort” in barn chores while also loving her experience as a trainer outside of the barn.

“I love the whole shebang,” she said.

Ehlers moved to the Clark County area from San Diego about seven years ago to be closer to family and to get away from an area she didn’t like living in. She now spends time as a horse trainer all over the Pacific Northwest and also works with Julia Richard at Quarry Ridge Farms in Battle Ground, where she started as a trainer just over one year ago.

While Ehlers said she enjoys “everything involved with horses,” she spends the most time teaching people of all ages to ride efficiently and effectively with a unique teaching style that slows lessons down.

“My goal has always been to produce safe and sound partnerships between a person and a horse,” she said. “This is the only sport in the world where the ball has its own brain and you have to communicate with it.”

Ehlers said her teaching style is unique because many trainers and courses set dates and times for training such as “60 days for this horse,” and Ehlers said each horse is different and trainers shouldn’t “quantify a horse to its level of education and number of rides.”

Ehlers explained how the most important part in a horse’s training is the “groundwork” and relationships the horse builds with its human counterparts.

Creating a foundational relationship is core to Ehlers training. Ehlers talked about her time working at Quarry Ridge Farm and training some of the horses on the property. One horse she is training now hasn’t learned the boundaries between horses and humans, and she had to rework the horses training from the ground up in “bite size pieces” the horse could understand as well as implementing positive reinforcement into the training for both the human and the horse.

“Most times when a horse is acting out, it’s not because they’re being bad,” Ehlers said. “They’re reacting because they’re feeling threatened … You have to bring that back to something more bite sized that you can understand and create the idea (in the horse) that being with the human is safe.”

Once a horse learns that being with a human is safe and secure, more rigorous training can begin. However, Ehlers always brings it back to the core groundwork of relationships and said the foundations of a horse's training are the “hardest things to fix down the road.”

One of the base foundations of her training includes training riders to have an effective position and how to communicate with the horse.

“When it comes down to it, that’s how horses communicate: though touch and feel,” she said.

As an example of her training technique, Ehlers mentioned her time training with Julia Richard daughter Bronwyn and her horse Hello. Bronwyn, a jumper by heart, was having trouble communicating with Hello, and both she and the horse were getting frustrated with the training process. Ehlers began training the duo and spent nearly a year on flatwork and communication. Five months ago, they started jumping technique. Now, Bronwyn and Hello are well on their way to jumping over fences and more, and the duo has one of Ehlers most important aspects: confidence.

“That’s the big thing in teaching lessons,” she said. “This game is 90 percent confidence and if you’re not confident in what you are doing or that you can do it together, you’re possibly going to have a bad time.”

While she still works at Richard’s farm in Battle Ground, Ehlers recently started up her own website, wildheartequestrian.com, where she takes more of a freelance aspect at horse training as well as promoting her work at Quarry Ridge Farm. While Ehlers is based in Clark County, she has her own insurance and travels all over the Pacific Northwest to teach. She can be found in barns from Eugene, Oregon, to Battle Ground.

“My goal is to produce those big happy partnerships that have horses and humans ‘dancing’ together and not arguing all the time,” she said.

Learn more about Jocelyn Ehlers and her teaching style and appointments online at wildheartequestrian.com/