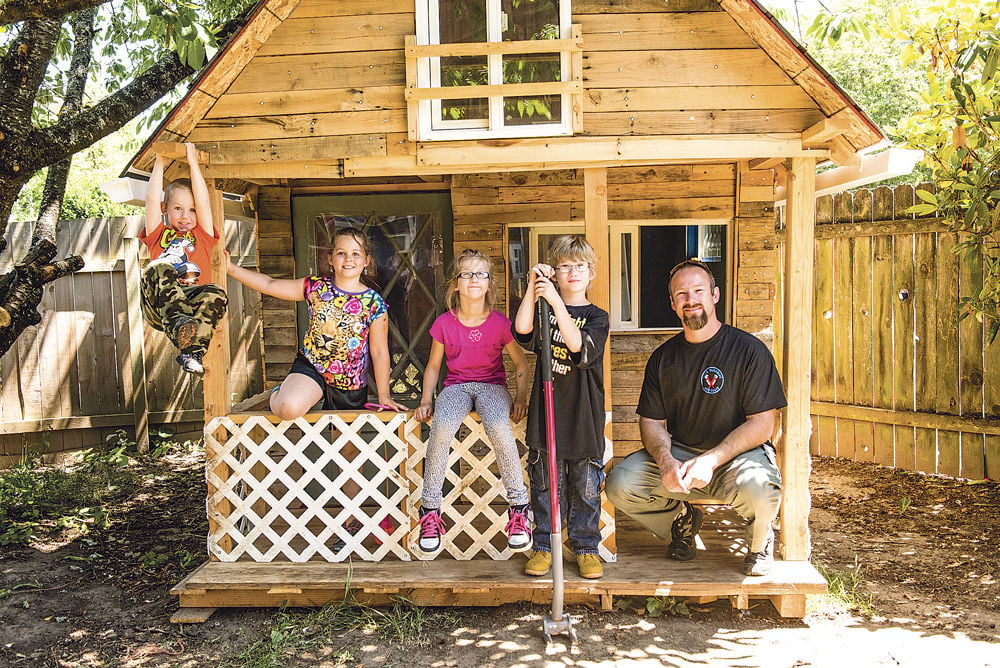 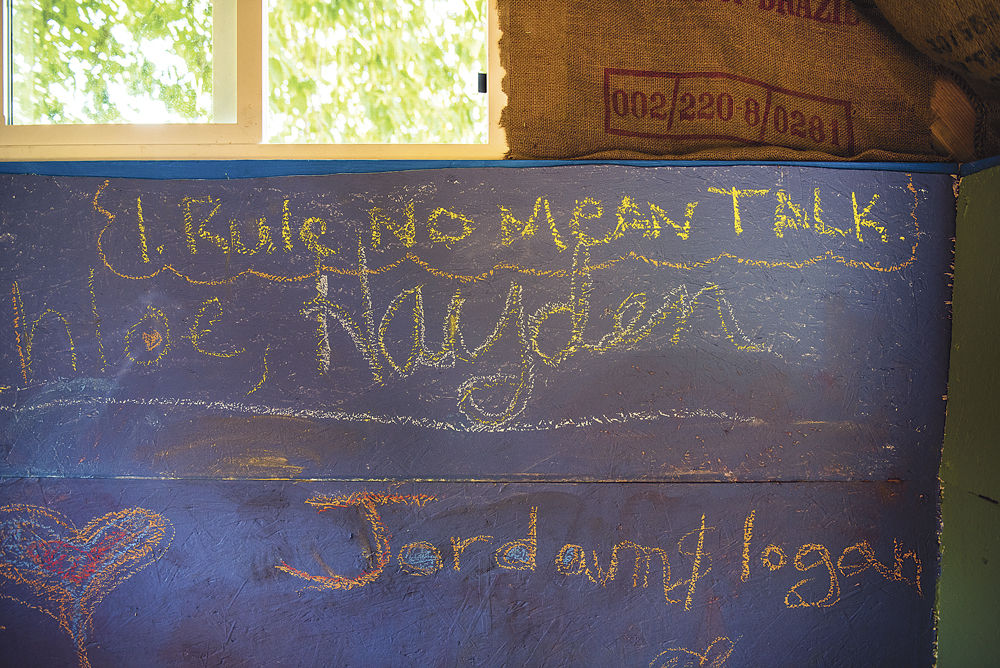 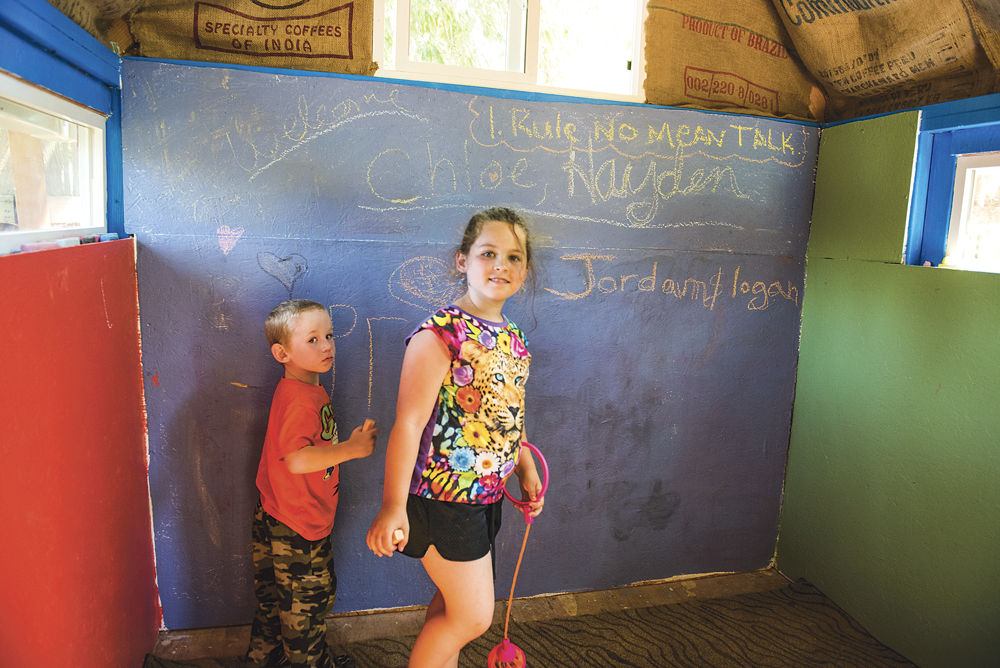 LOGAN ROWE, age 4, and Jordan Linder, age 9, add to the messages and artwork decorating the chalkboard-painted wall of their playhouse. 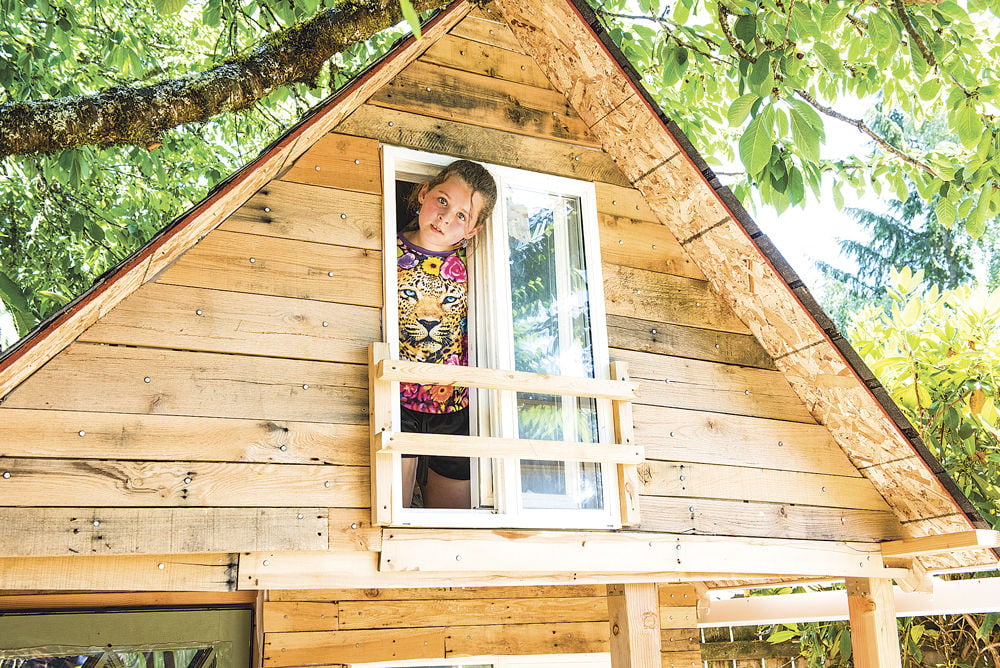 JORDAN LINDER, age 9, peeks out from a Juliet balcony in the playhouse, a mom-approved alternative to Tim Rowe’s vision of a big slide exiting the second story window. 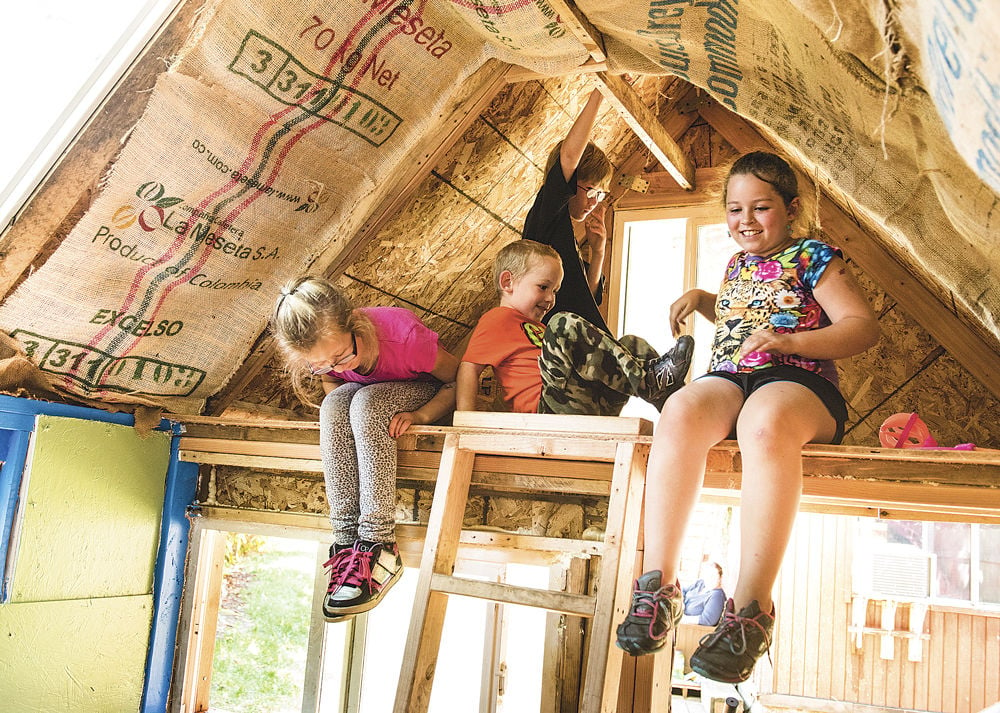 UP TO SEVEN kids have clambered up the ladder into the balcony of the playhouse, which extends over a cozy front porch. Salvaged burlap coffee bags covering the ceiling were a craigslist find. 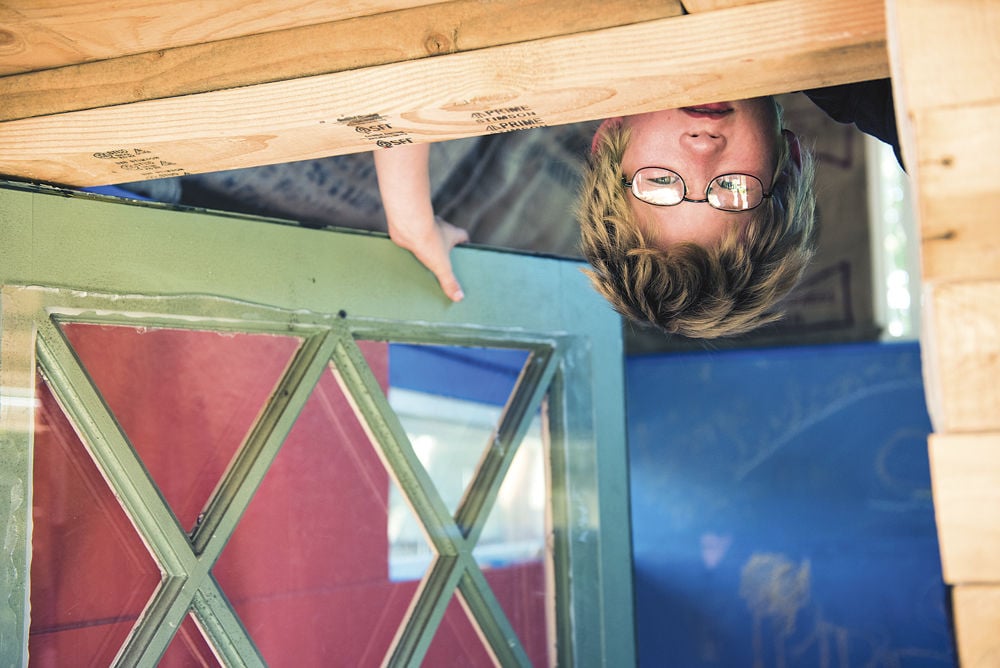 LOGAN ROWE, age 4, and Jordan Linder, age 9, add to the messages and artwork decorating the chalkboard-painted wall of their playhouse.

JORDAN LINDER, age 9, peeks out from a Juliet balcony in the playhouse, a mom-approved alternative to Tim Rowe’s vision of a big slide exiting the second story window.

UP TO SEVEN kids have clambered up the ladder into the balcony of the playhouse, which extends over a cozy front porch. Salvaged burlap coffee bags covering the ceiling were a craigslist find.

Children are always busy with something.

Tim Rowe didn’t think much of it when his four youngest children asked to borrow some spare hammers and nails. But then, he says, “I heard the pitter patter of hammers behind the shed,” and he decided to investigate. “We’re building a clubhouse!” said the kids.

That was the seed of an idea that took on a life of its own in Tim’s backyard in Vancouver. He took a look at playhouses on the internet, some selling for upwards of $10,000, and wondered how he could build one for his own kids. Tim’s wife, Brittany Rowe, agreed to the project with one stipulation – the budget was $1,000.

A stack of pallets behind a plumbing supply store, a regular stop in Tim’s workday with his business Rowe’s Plumbing, proved to be the answer. Tim brought home 68 pallets and got to work.

Tim estimates that 55 of them went into the playhouse. Some were used as-is for walls, and others were disassembled for their lumber. He started with a hammer and pry bar, but it was taking 10 minutes to take each pallet apart, more time than he wanted to spend. Tim spotted a pallet puller on craigslist for $40, and cut his demolition time down to about 30 seconds per pallet.

The floor was created using heavy weight pallets, set on a flat spot in the back yard and sheathed in one-inch-thick exterior plywood. Pallets are joined with longer structural members for walls and faced with 16 sheets of plywood, covering both sides, to stabilize the structure. The playhouse contains $250 worth of screws alone, holding it all together.

Many items were found on Craigslist. Windows were $50 each and required some searching; most house-sized windows were too large for the playhouse. Rowe found burlap coffee sacks for $2 each, which add character to the ceiling and provide an air pocket of insulation. One wall is covered with chalkboard paint and headlined by the No. 1 playhouse rule, “No Mean Talk.”

The front door was salvaged from an old farmhouse next door, the original homestead which predates the neighborhood. With a foot cut off the bottom, it is the perfect size for kids. Tim’s mother-in-law contributed half the needed roofing shingles, left over from a new roof on her own home, and Tim purchased the rest.

With the structural work complete, Brittany took on the job of nailing strips of pallet wood as siding over a layer of “house wrap.” The rustic boards give the playhouse a vintage, time-worn look.

Tim estimates the entire project took about five full days of work, spread over many weeks as he had time. Tim often works in Battle Ground with his plumbing business, and he said he was surprised by the enthusiastic following for his project, which he shared on the Facebook page “Battle Ground, WA.” The finished playhouse is 8 feet by 8 feet, with a 4-foot deep loft extending over a front porch.

Tim and Brittany’s five children are a blended family of his, hers and ours, and Tim is adamant that they have the home and childhood that he didn’t have. Tim’s childhood was divided between stints in foster care and short periods with his mother or his father. He was born in New Zealand and citizenship complications had him traveling alone between countries from the age of 7.

With his schooling disrupted along with his home life, he completed an agricultural degree at the age of 15 and went to work on a dairy farm in New Zealand. Once he was able to return to the United States, he joined the U.S. Air Force, where he received training in plumbing and the start of a new career.

When asked if he would take on a project like this again, Tim declared, “Absolutely!” He is already imagining a cluster of tiny pallet cabins on a remote property, a place to get away for hunting or vacations.

One of Tim’s ideas for the playhouse was firmly vetoed by Brittany, despite enthusiastic support from the kids. That would have been a tall slide exiting the second story loft window. In its place is a Juliet balcony, a much loved compromise.