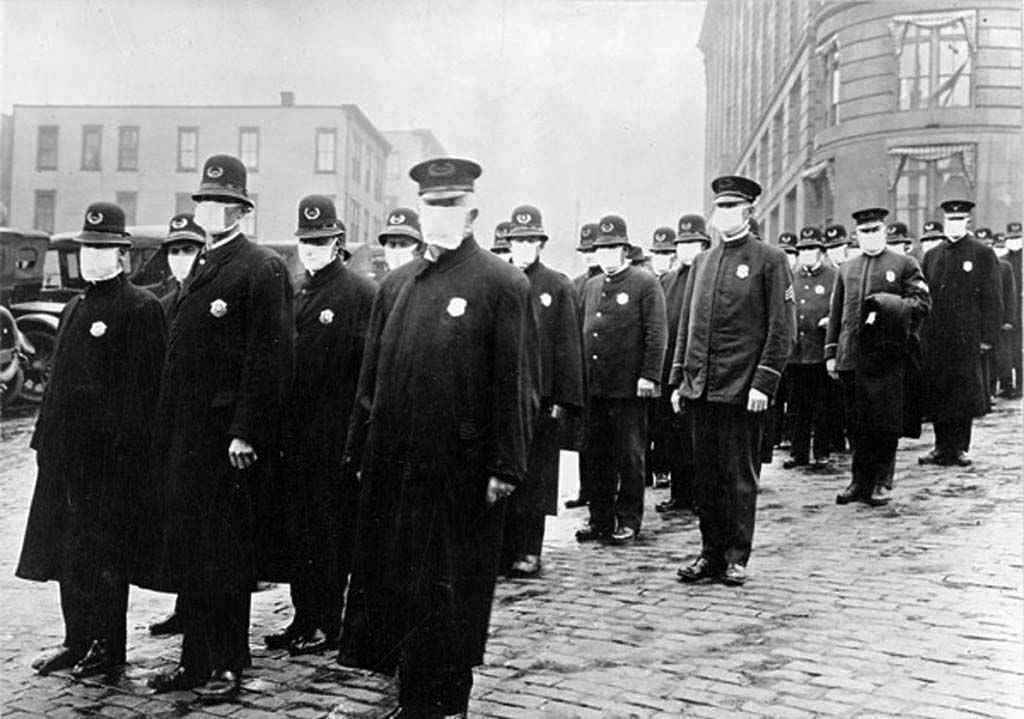 Police officers wear gauze masks during the influenza epidemic in Seattle in December 1918. 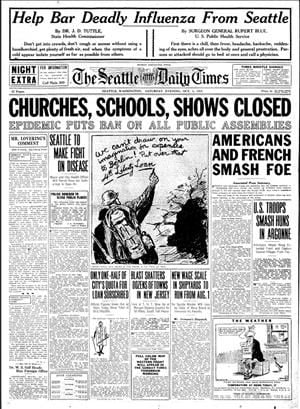 Editor’s note: This is the first of a multi-part series taking a look back at the so-called “Spanish Flu.” Additional installments will come in upcoming editions of The Reflector.

The misnamed "Spanish Flu" pandemic peaked in late 1918 and remains the most widespread and lethal outbreak of disease to afflict humankind worldwide in recorded history. Small mutations in a flu virus created an extraordinarily lethal variant that killed healthy young adults as readily as it did more vulnerable age groups. The pathogen's place of origin is still debated, but the role of World War I in its rapid spread is undisputed. Even so, Washington, despite a heavy military presence, fared better than any other state in the union except Oregon. While the death toll was highest in the state's most populous cities, the pandemic touched nearly every community. Attempts to control the outbreak were largely futile, and from late September 1918 through the end of that year it killed nearly 5,000 Washingtonians. More than half the victims were between the ages of 20 and 49.

Influenza viruses probably first sickened humans 6,000 to 7,000 years ago, corresponding with the early domestication of pigs and cattle. Increased human mobility facilitated epidemics and pandemics that could affect vast areas. Until the early 1930s, influenza was thought by most scientists to be a bacterial rather than a viral disease. In fact, both were often involved; those weakened by an influenza virus were left more vulnerable to bacterial pneumonia. Still, during flu's annual visitations it usually caused only moderate illness. But now and then something different and far more lethal came along.

The first recorded pandemic likely caused by an influenza virus came in 1580 and ravaged an area stretching from Asia Minor to as far north as today's Netherlands. There were frequent large outbreaks thereafter, but relatively few deaths. A more lethal virus struck Europe and the Russian empire in 1781-1782, and in 1889 and 1890 more than a million people died when a deadly variant burst from China, spread to Russia and throughout Europe, and made its way to North America and Latin America before sputtering out in Japan. Next came the pandemic of 1918, by far the most widespread and deadly, a dismal distinction that stands to the present day.

American Samoa was the only organized society on the planet to entirely escape the 1918 pandemic, thanks to an early, rigorous and lengthy quarantine. In Western Samoa, barely 50 miles distant, 20 percent of the population died in a matter of months. Flu girdled the globe from east to west and from north of the Arctic Circle to the southern tip of Chile, leaving in its wake shattered societies and tens of millions dead.

Before 1918, the average mortality rate for most influenza was only about one-tenth of 1 percent, or approximately one fatality for every 1,000 infections. The 1918 flu killed more than 2.5 percent of those afflicted, almost always within days of the first symptoms and often within hours. Some died from acute respiratory distress (a direct effect of the flu virus) and others fell prey to opportunistic bacterial pneumonia. And unlike almost any previous known infectious disease, this virus hit adults between ages 20 and 40 particularly hard.

World War I was in its final months when the worst of the pandemic hit. Approximately 53,500 Americans lost their lives in combat and a nearly equal number died of influenza while serving in Europe. The number of Americans, military and civilian alike, killed by the virus back home was estimated to be in excess of 650,000. The most conservative (and perhaps least accurate) estimate of the death toll worldwide is more than 20 million, and as many as 100 million may have died (many governments kept few or no accurate records, making even rough estimates highly problematic).

It's unknown where the pandemic originated. It was commonly called the "Spanish flu," probably because Spain, which didn't participate in World War I, freely reported illnesses and deaths caused by the disease, information that was censored by the combatant nations. The prejudiced suspicion that deadly infectious diseases spring from rural pig sties in Asia or the steamy jungles of sub-Saharan Africa probably was not true in 1918. One supportable theory holds that the "Spanish" flu originated in Haskell County, Kansas, where in February 1918 a local doctor was overwhelmed by a number of cases of a particularly virulent and deadly illness, unlike anything he had seen in long years of practice. During the outbreak a local man came home on leave from the army, then returned to Camp Funston in the sprawling Fort Riley complex 300 miles away. Within three weeks, more than 1,100 soldiers at the camp were hospitalized with the flu and 28 did not survive, an unusually high mortality.

By early April significant outbreaks of a milder flu were reported, including in Detroit, where as many as 2,000 workers at the Ford automobile plant were stricken. The deadly variant hit Spain in late May. The mystery remains today -- it is uncertain where the "normal" flu virus mutated into an efficient killer. Competing theories range from Kansas to Norway to English Channel ports to the usual suspect, China. It is unlikely that this question can ever be conclusively resolved, and it hardly matters.

One fact is undisputed: War and disease went hand in hand. During the spring of 1918, convoys were carrying American troops to fight in World War I and returning with wounded, ill, and demobilized soldiers. While the conflict apparently had no direct link to the origins of the virus, it had everything to do with its spread.

Hints of a Coming Cataclysm

Many of the cases reported in the middle months of 1918 were relatively mild and localized, but in late August events took a dire turn when the deadly variant broke loose:

"It occurred in three major parts of the North Atlantic almost simultaneously: Freetown, Sierra Leone, where local West Africans were brought together with British, South African, East African, and Australian soldiers and sailors; Brest, France, which was the chief port for Allied troops; and Boston, Massachusetts, one of America’s busiest embarkation ports and a major crossroads for military and civilian personnel of every nation involved with the Allied war effort. Massive troop movements and the disruption of significant segments of the population during World War I played an important role in the transmission of the disease" ("Influenza," Medical Ecology website).

In Washington the first eight months of 1918 seemed similar to most years, and newspapers in the state apparently took no notice of spring outbreaks of flu in Detroit and a few other American cities. On April 15, however, it was reported that at the army's Camp Lewis south of Tacoma, "Pneumonia has slightly increased during the week, most of the cases follow influenza, which was at its maximum two weeks ago" ("Civilian Workers Fast Being Eliminated ..."). In late May The Seattle Times carried a brief wire-service report stating that "a mysterious epidemic" had sickened at least 40 percent of Spain's population, and that although the symptoms "resemble influenza ... many persons afflicted with it have fallen in the streets in a fit" ("Unknown Disease ... "). One week later, the paper said of the Spanish outbreak, "The rapidity of its spread is comparable only to the great plague of 1889," a reference to the flu pandemic of nearly 30 years before ("King Visited by Strange Illness"). In June there were gleeful reports of a flu epidemic among enemy German soldiers, but early that month Camp Lewis reported just 39 cases.

Things seemed more ominous by early July. On July 9, The Seattle Times reported that the influenza in Spain had "spread over other parts of Europe" ("A Puzzling Epidemic"). On July 28 the newspaper noted that Camp Lewis had 327 cases of flu, but a week later the number had fallen to below 100. As late as mid-August there were reassuring reports that the count of flu cases at the army base continued to decrease, and no indication of any special concern. Even into September, the general mood was one of confidence. An optimistic commentator enthused, "It is a marvel, due to the perfection of our medical science, that there has been no widespread epidemic this summer of a more serious character than 'flu,' as the Spanish influenza and other allied fevers are called" ("Heavy Rain and Mud ... ").

As the month wore on, a tone of modest alarm began to creep into some accounts. A Times article on September 22 referred to a "mild epidemic" at Camp Lewis, with 173 new cases reported ("Camp Lewis Reports ... "). On the same page, mention was made of two serious cases of influenza reported in Bellingham. Still, two days later army medical sources were quoted in the newspaper as saying, with some jocularity, "There may have been a Spaniard with influenza at Camp Lewis, but there is no Spanish influenza here" ("Say Camp Lewis ... ")..

This could have been whistling past the graveyard, but in truth no one had any understanding of the tsunami that was building. What was happening was not remotely within the knowledge of the brightest scientists and doctors of the era. The virus that caused influenza had mutated, and in ways that would make it one of the most deadly pathogens to ever afflict the human race. When it fully hit America it moved with breathtaking speed through the entire country, helped at every turn by a war-mobilized military.