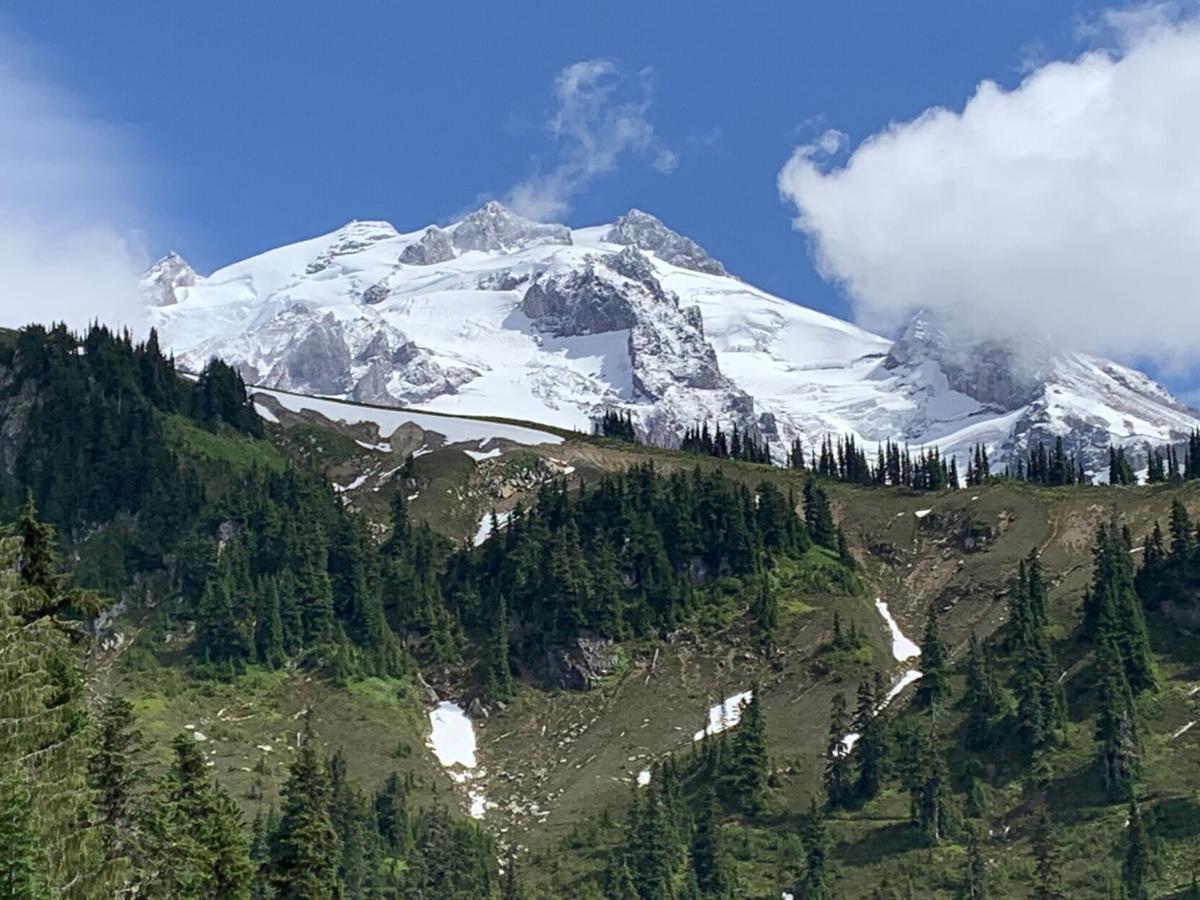 Glacier Peak sits between Stevens Pass and Rainy Pass along the Washington portion of the Pacific Crest Trail. 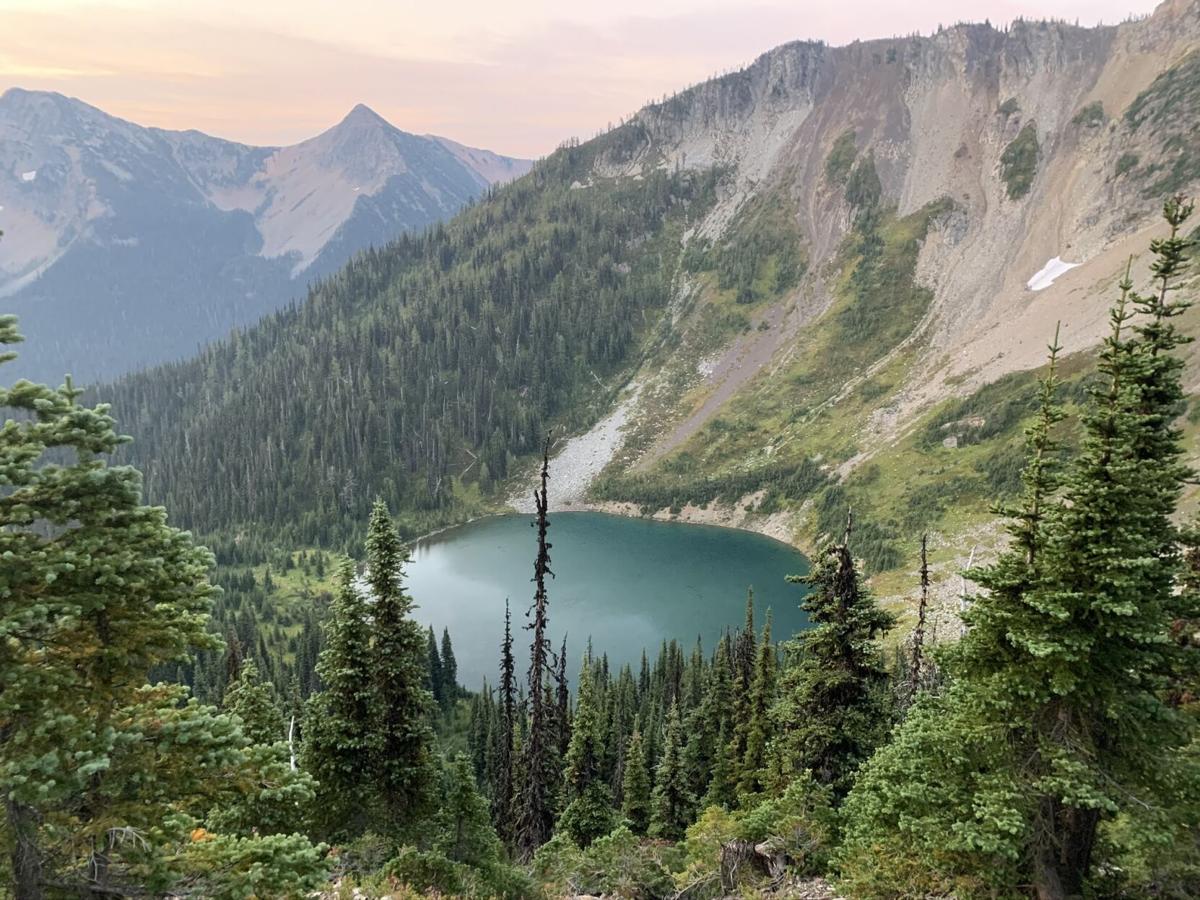 Hopkins Lake sits about 6 and a half miles from the United States border with Canada in the Pasayten Wilderness. Peggy Rollens and Karen Puyleart camped at the lake on their last leg of the Pacific Crest Trail. 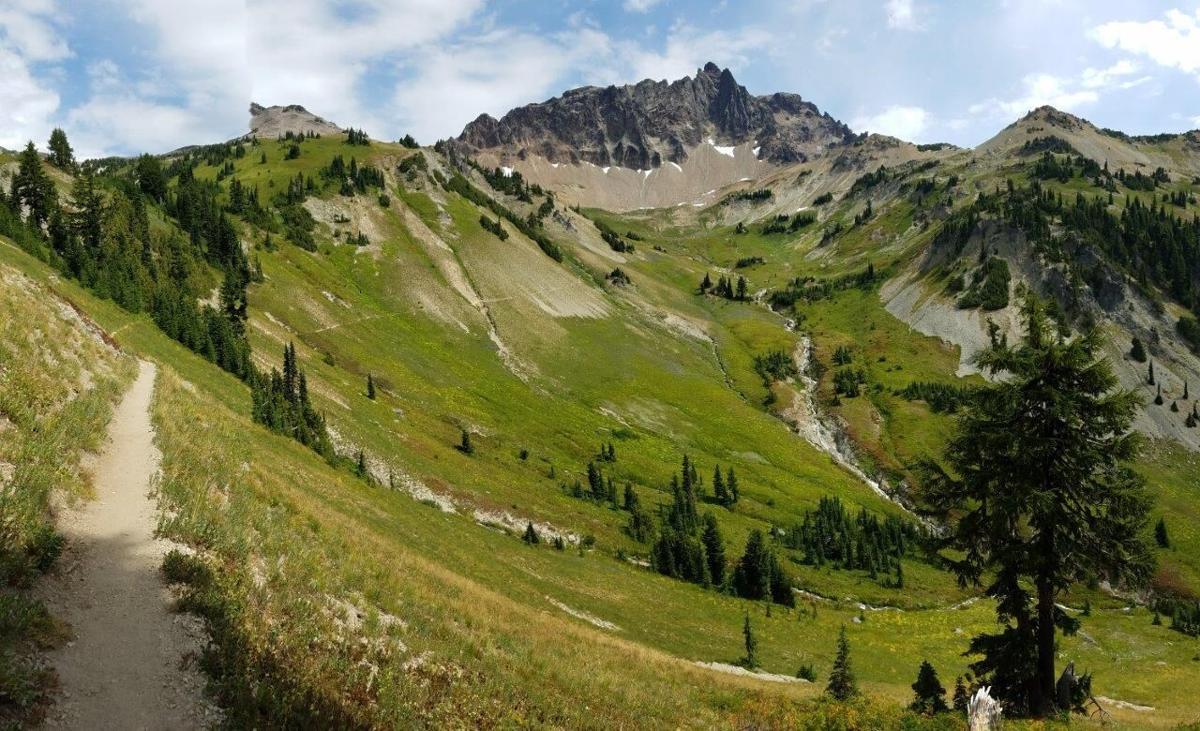 The Cispus Basin in the Goat Rocks Wilderness is a place to catch a view of some greenery along the Pacfic Crest Trail. 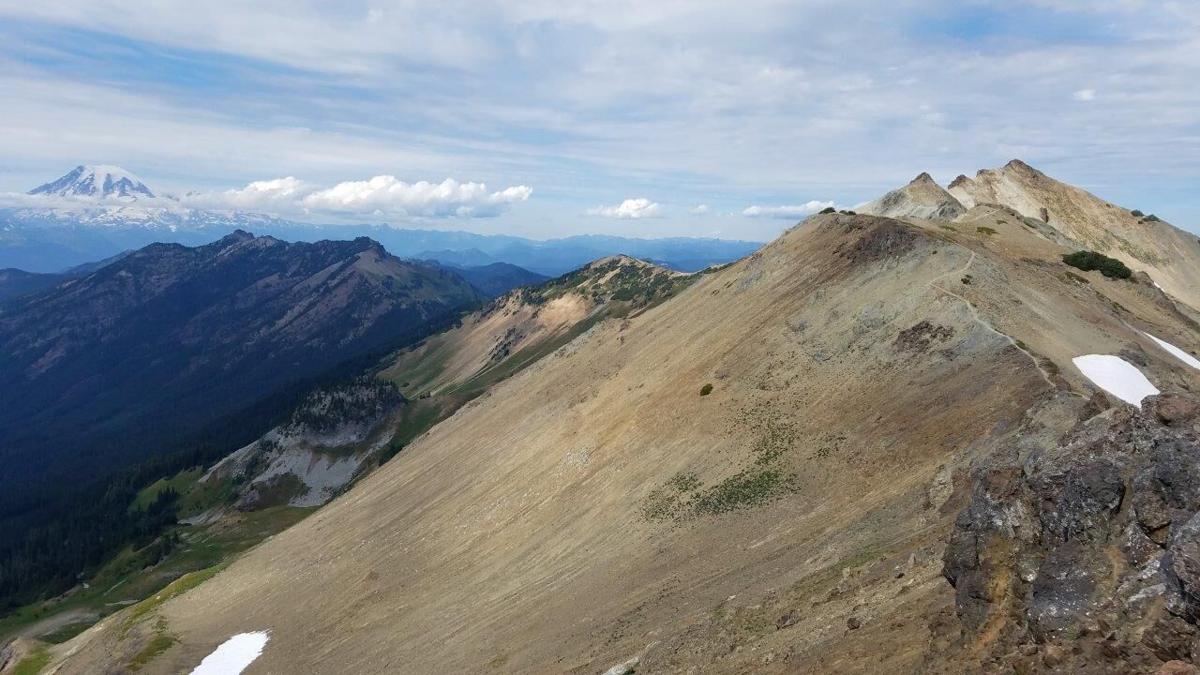 The “Knives Edge” is one of the more fearful portions of the trail. However, it offers a “must see” view of Mount Rainier to the left. 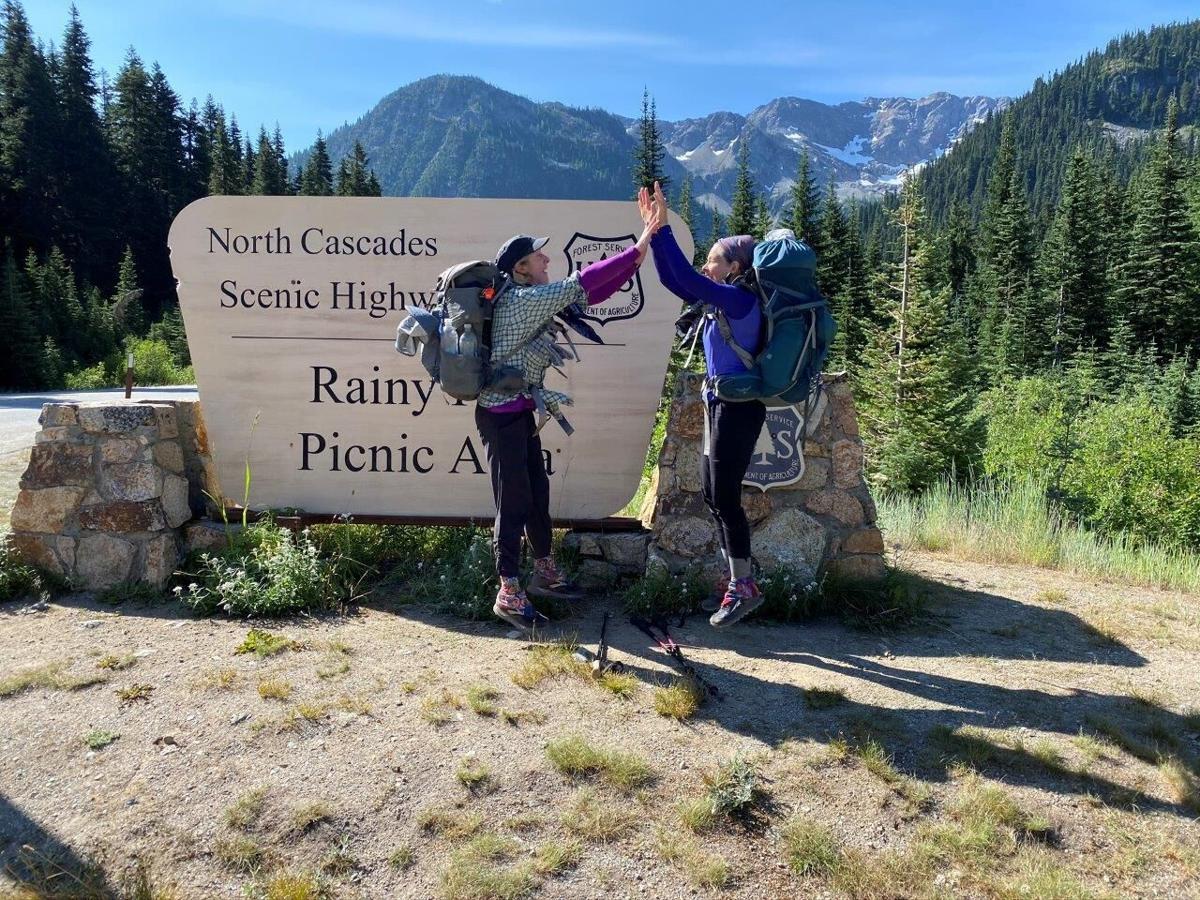 Karen Puyleart and Peggy Rollens share a high five after finishing the Stevens Pass to Rainy Pass portion of the trail. 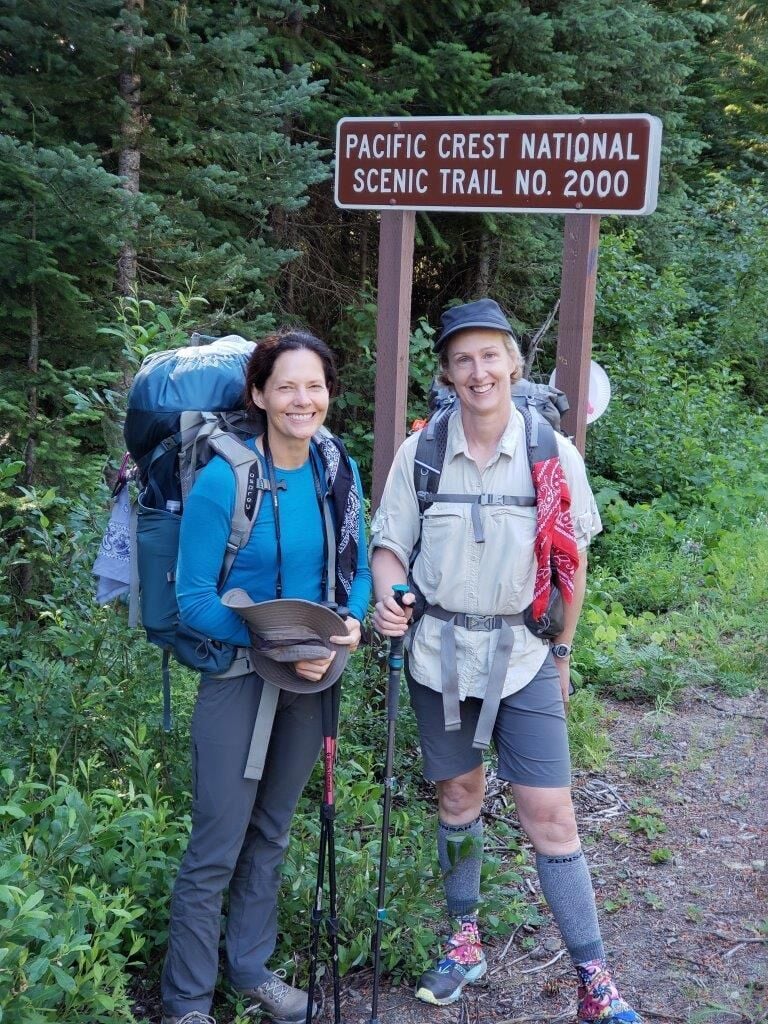 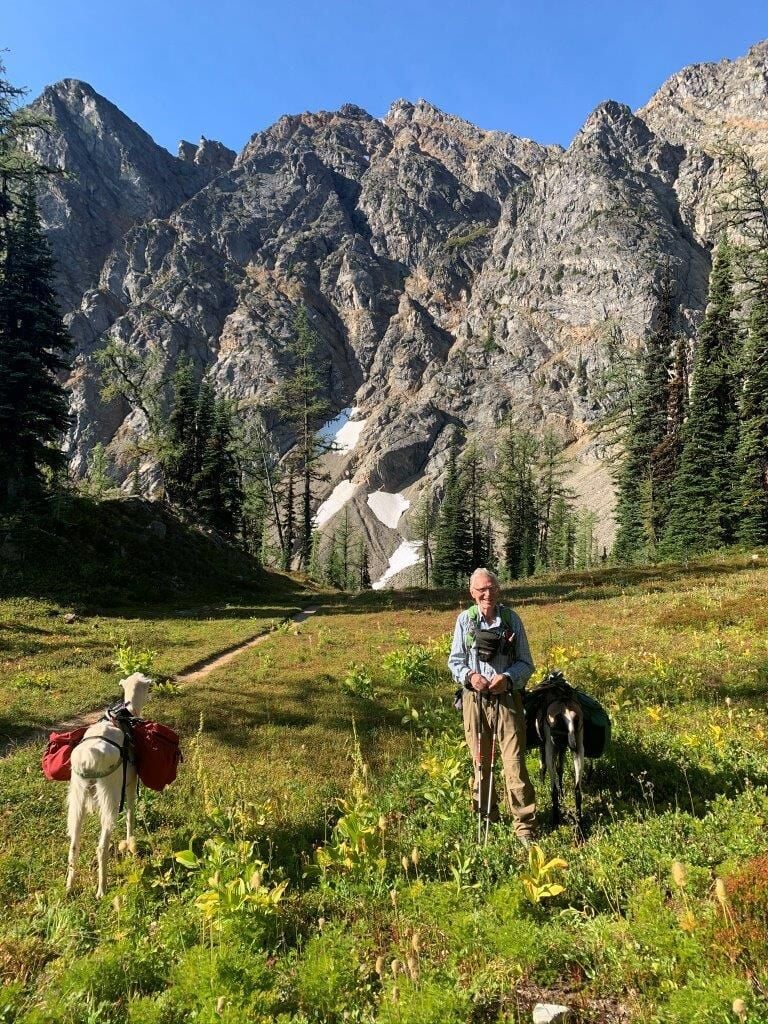 One of Karen Puyleart’s favorite parts about hiking along the trail was meeting new people. She once met a man that hiked with goats.

Over the past four years, Karen Puyleart of Battle Ground and her friend Peggy Rollens have spent time hiking Washington’s portion of the Pacific Crest Trail. Running alongside Washington’s Cascade Range, the Washington portion of the trail offers sights of Mount Rainier, Mount Adams and Glacier Peak along its over 500-mile route. According to Puyleart, she and Rollens split the long trail into six “manageable sections” based on a book called “Hiking the Pacific Crest Trail Washington” by Tami Asars. They tackled one section per year and two sections in 2020.

As someone who had not spent time backpacking around Washington until 2016, Puyleart said she started hiking the trail with Rollens after meeting her at Krav Maga class. Rollens works for the Forest Service and her brother-in-law told the duo to hike “Section J” of the trail, which is about 65 miles and stretches from Snoqualmie Pass to Stevens Pass. After hiking the one section, Puyleart and Rollens decided one section wasn’t enough and hit the trail again in 2017 to hike another.

This year, Puyleart and Rollens finished up their trek and hiked over 200 miles together. In early August, they set out to hike the section from Stevens Pass to Rainy Pass, about 127 miles. The duo spent nine days and eight nights out on the trail, meeting new people and catching a glimpse of Glacier Peak. On this portion of the hike, Puyleart and Rollens encountered a lost hiker who was in the early stages of hypothermia. Having needed to be rescued by helicopter, Puyleart emphasised the importance of being prepared for the trail.

“I communicate with my husband through the use of beacons. You can put canned messages in them,” she said, explaining that her messages include “stopping for lunch,” “made it to camp” and “alive and well.” Before she sets up camp, Puyleart sends out a message so her husband knows she’s safe.

Along with packing a beacon, Puyleart recommends finding the correct backpack and only packing the essentials because weight is everything. The first year, Puyleart and Rollens packed a little heavier. Over the years, they found what worked for them. Now, they carry a few changes of clothes, which are usually made of wool and other quick-drying material, a pocket rocket stove for heating water, a sleeping bag, dehydrated food and water.

Puyleart weighs everything in her pack before the trip and tries to keep the pack as light as possible.

While making sure you’ve packed the correct items, Puyleart said it is essential that backpackers “know their skill level and know their trail” before heading out to the wilderness. Much of the Pacific Crest Trail has extreme elevation changes, and spaces between campsites vary depending on the trail. Puyleart recommends downloading the Guthook app which, along with having a map of the area, can help hikers and backpackers out with crucial information such as nearby campsites and sources of water.

Other hikers can also comment on the app leaving tips and tricks for future trekkers.

“If you stray even a couple of feet from the trail, Guthook will tell you you’re off the trail and point you in the right direction,” Puyleart said.

After their first section of the trail in early August, Puyleart and Rollens decided to complete the last section of the Pacific Crest Trail from Rainy Pass to the border between the United States and Canada. The duo traveled 90 miles over five days and four nights to close out the trip. For Puyleart, the best part about the journey of the Pacific Crest Trail was the people she met along the way. On one leg of the journey, she ran into a gentleman who hiked with goats by his side. During the journey, Puyleart saw little wildlife but remembers a time when she was close to marmots and hearing them whistle super loud.

According to Puyleart, the Pacific Crest Trail can offer challenges for even the most experienced of backpackers. However, for she and Rollens, the challenge was the most fun part of the journey. Portions of the trail such as the “Knives Edge” can challenge those with a fear of heights as dropoffs are present alongside the trail. To handle the long distances the trail requires, Puyleart said she and Rollens tried to get most of the hike done before they stopped for lunch.

“We got started on the trail by 6 a.m. and tried to cover as much ground as possible,” she said.

While Puyleart doesn’t regret the time she spent out on the Pacific Crest Trail with Rollens, she said she might put longer backpacking trips aside and focus on Washington’s smaller trails.

“I don’t want to say never because I never say never,” she said. “But I just want to explore more places in the Northwest where I grew up.”