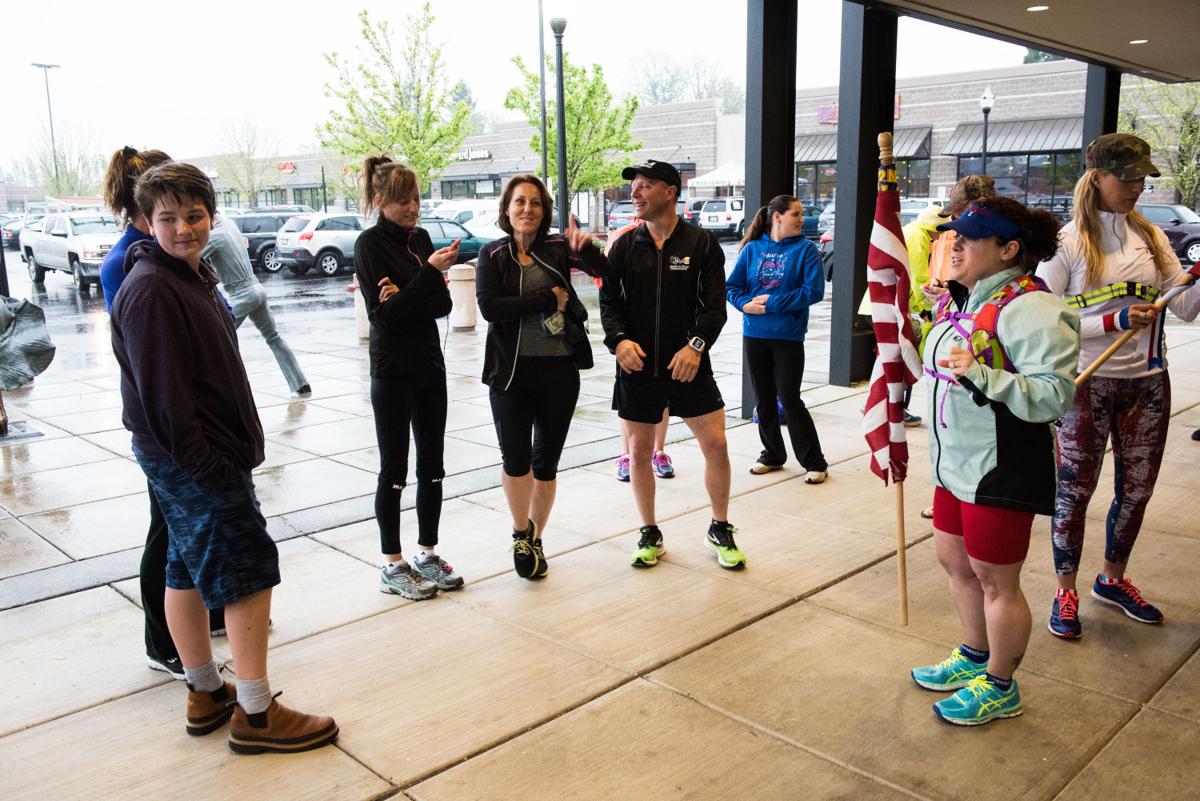 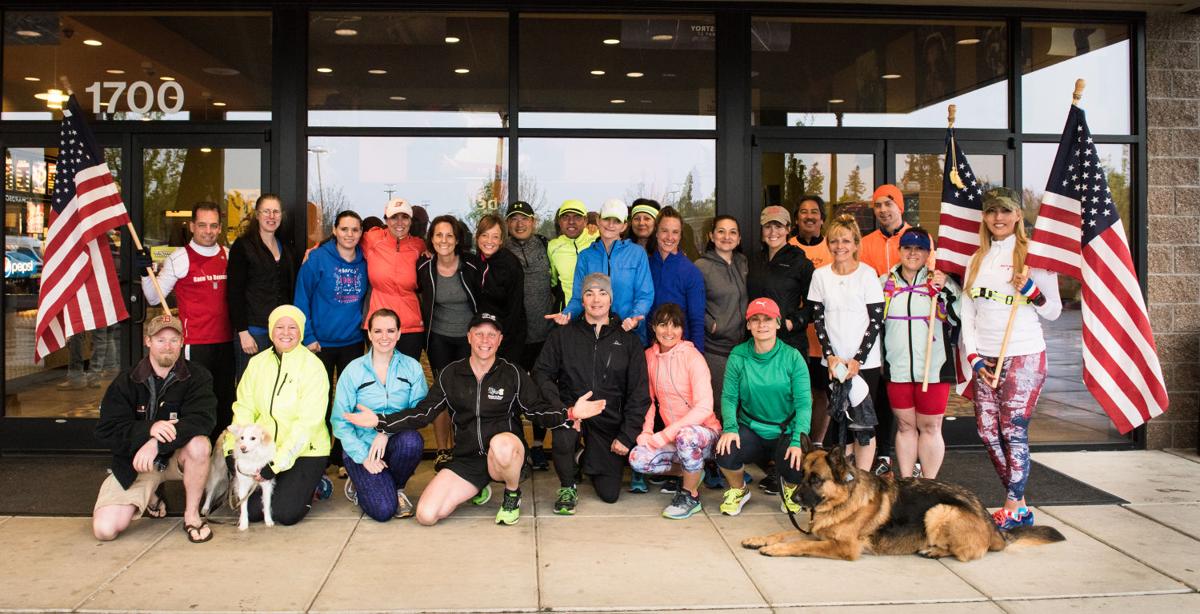 MEMBERS OF THE NCC Running Club met at Battle Ground Cinema on April 12 for their weekly Tuesday night run. 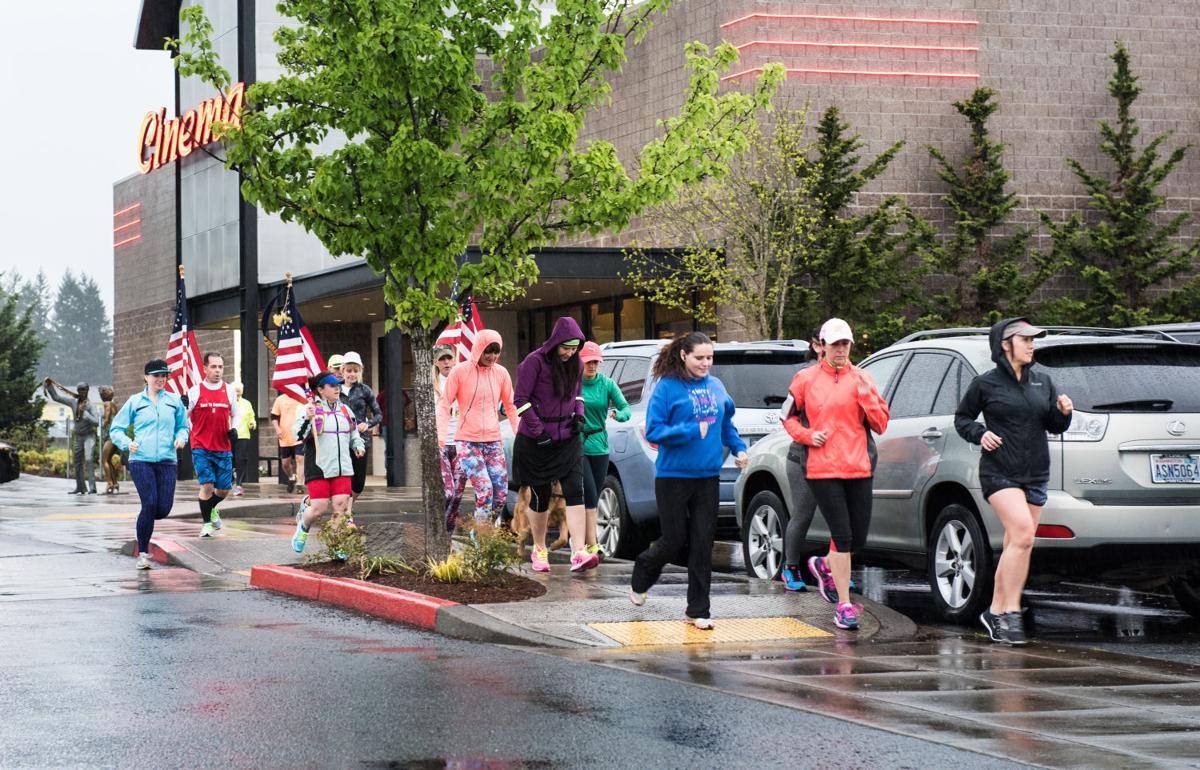 THE NCC RUNNING CLUB was undaunted by pouring rain when they departed from Battle Ground Cinema for their weekly group run April 12.

MEMBERS OF THE NCC Running Club met at Battle Ground Cinema on April 12 for their weekly Tuesday night run.

THE NCC RUNNING CLUB was undaunted by pouring rain when they departed from Battle Ground Cinema for their weekly group run April 12.

When Jennifer Lyman of Battle Ground started running in 2014, she was just looking for a way to keep off the 70 pounds she had worked so hard to lose.

Running was exercise she could do for free, from her own home, on her own schedule. Lyman got started using an “app” called Couch to 5K, which aims to take users from couch potato to running three miles (or 5K) in two months.

After participating in a few races, she loved the comradery and support she found. She decided to bring the group running experience home. With support and advice from an established Vancouver running club called the Chuggers, Lyman forged ahead to create North Clark County Running Club.

At the first NCC Running Club’s Tuesday night run in November 2015 they welcomed 35 participants. Each week’s 5K run (3.1 miles) now sees a core group of 15 to 20 runners, a number that has swelled to as many as 60 at times. Walkers are always welcome, too.

“It was all grown on Facebook,” said Lyman, describing the publicity that spread the word. Since the club was founded they have only canceled their weekly run one time, during a severe windstorm.

Lyman remembers her mother started running at the same age she is now. Her mother went on to compete in the Boston Marathon and the Rhode Island Marathon, and then she quit running. Once Lyman began running, her mother resumed the sport and they often run together. Now Lyman is training to complete a marathon herself.

“There is this thing called runner’s high,” she said, explaining why she keeps pushing herself to run. “The races are really raw and real. People get sick (in races). But then you see people cross the finish line and the emotion that overwhelms them (that they have succeeded).”

Along the way to becoming a runner, Lyman was sidetracked by an Iliotibial Band injury. She credits Battle Ground personal trainer Pamela Easter with helping her to recover and to become a better runner.

“The biggest hurdle was learning to do it correctly,” she said. “You have to strength train.”

Seeing how much impact group training has for those in the running club has inspired Lyman to become a certified personal trainer herself. She wants to specialize in group training, to help others enjoy that support.

The NCC Running Club includes runners at all stages, from a mom who just had a baby to a Boston Marathon qualifier.

“The whole idea is that we just have fun,” Lyman said. “We love to run and we love to hang out. There are so many things we can learn from each other.”

Lyman brought a new layer of meaning to her running when she became a flag runner with the organization Race to Remember. She runs carrying a U.S. flag in honor of all who serve in the military, past or present. The flag looks like it would be difficult to carry, but Lyman said, “You get used to the flag and don’t notice. You get honks and high fives. You engage with people.”

The club brings together two things that Lyman loves – running and the Battle Ground community. Each Tuesday night the club meets at a local business to begin their run, and congregates afterward for a meal or drinks and social time.

“I thought this would be a great way to connect local businesses with the community,” she said.

Lyman is enthusiastic in her efforts to show off north Clark County businesses.

“The businesses are what people see here. It creates a good experience for runners,” she said. “I love that we have great businesses in town and we can showcase them.”

Routes are chosen to enjoy the beauty and diversity of north Clark County, including beautiful roads and “awesome wineries and breweries,” said Lyman. She also looks for routes that are safe, with adequate shoulders or sidewalks and lighting at night.

A new addition to the club’s calendar is a First Friday run in downtown Battle Ground. Runners start at 7 p.m. with a map of participating businesses and try to collect a raffle ticket at each one. Main Street is a mile and a half long, so a round trip is the perfect fit for their usual three mile distance. At the end, runners meet at one of the local businesses for raffle prizes and refreshments.

Facebook is still the go-to medium for the group. Weekly run schedules and locations are posted on their page at www.facebook.com/TheNCCRunClub.

Lyman is enthusiastic about the support that runners gain by being a part of a club.

“They think the fact that you are out there doing it is amazing,” she said. “They cheer you on.” She feels sure that if she can get one person to run, they’ll be hooked.