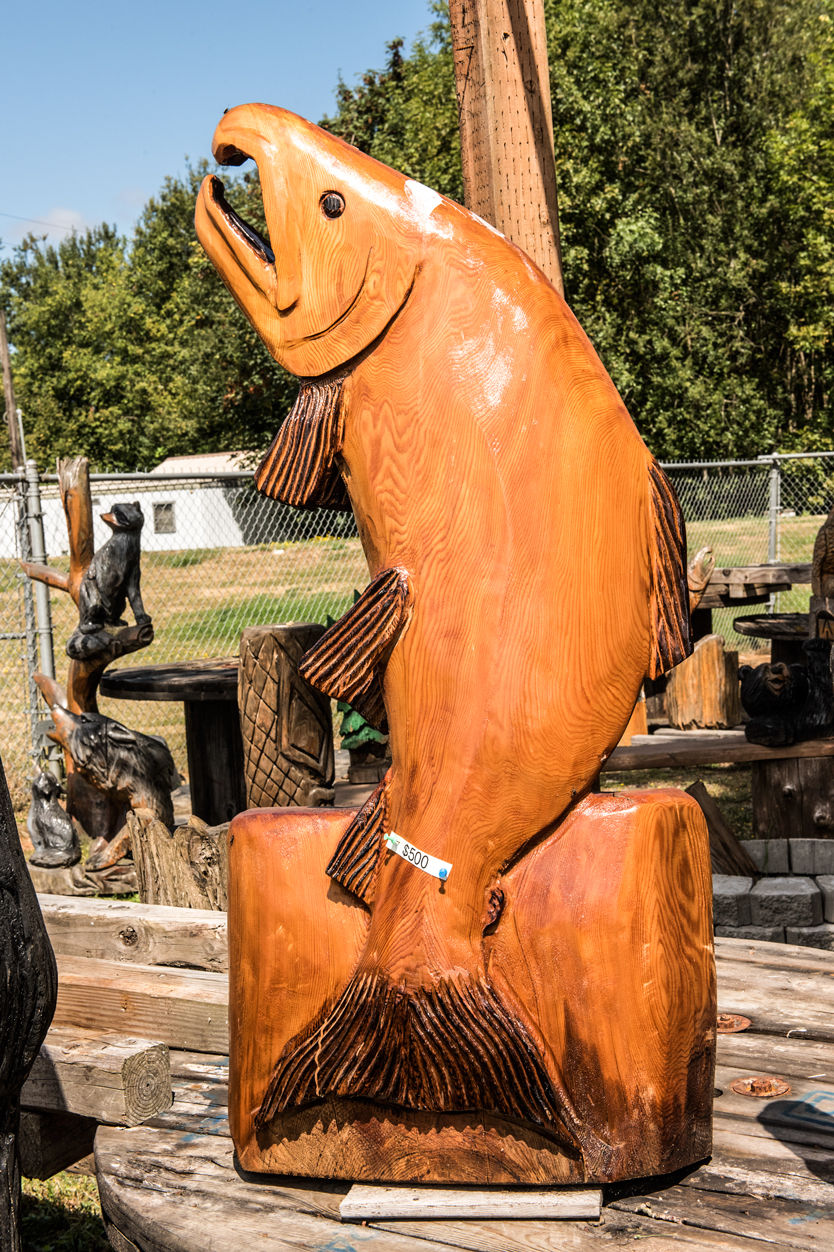 THIS FISH was carved from a salvaged piece of old growth cedar sporting 22 growth rings per inch, said Matt Hambrook of Hambrook Chainsaw Carvings in Ridgefield. 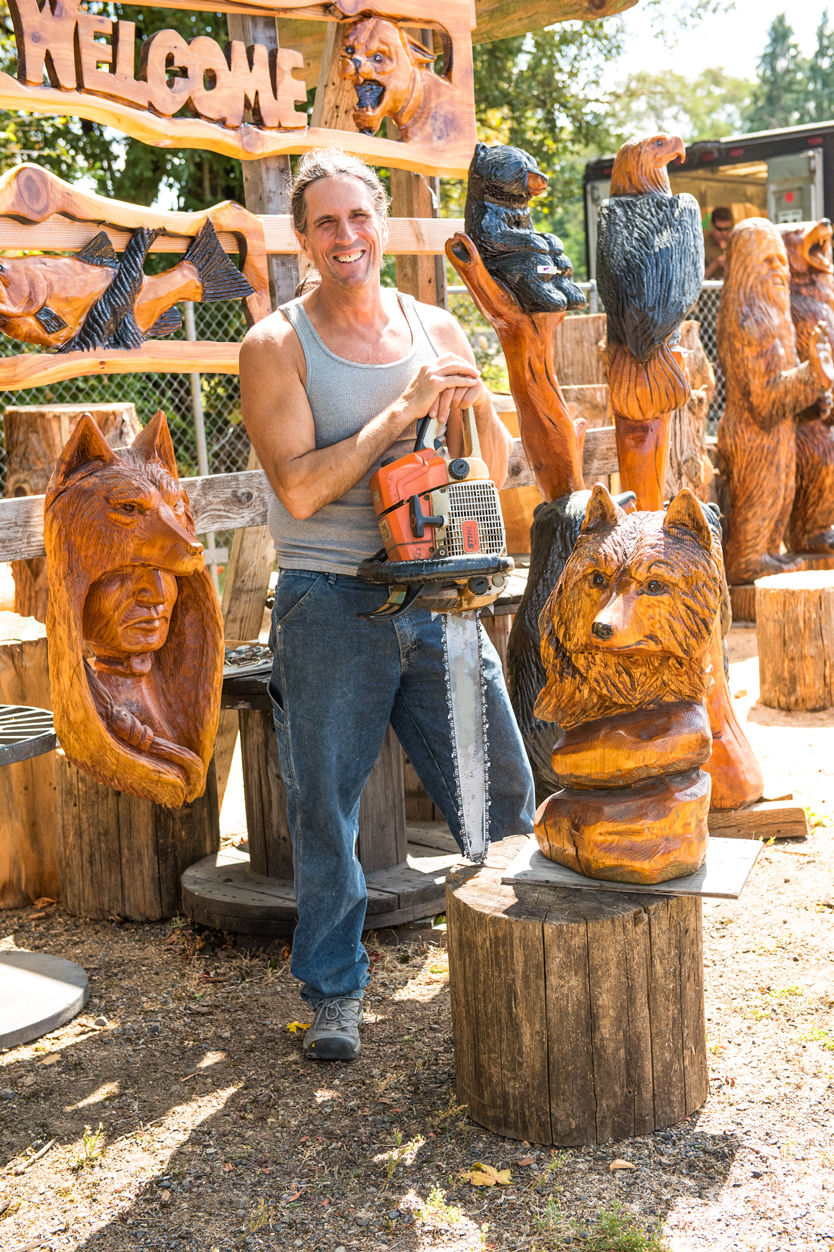 MATT HAMBROOK, of Hambrook Chainsaw Carvings in Ridgefield, crafts a wide variety of sculptures, wall hangings and furniture from salvaged wood and a chainsaw. 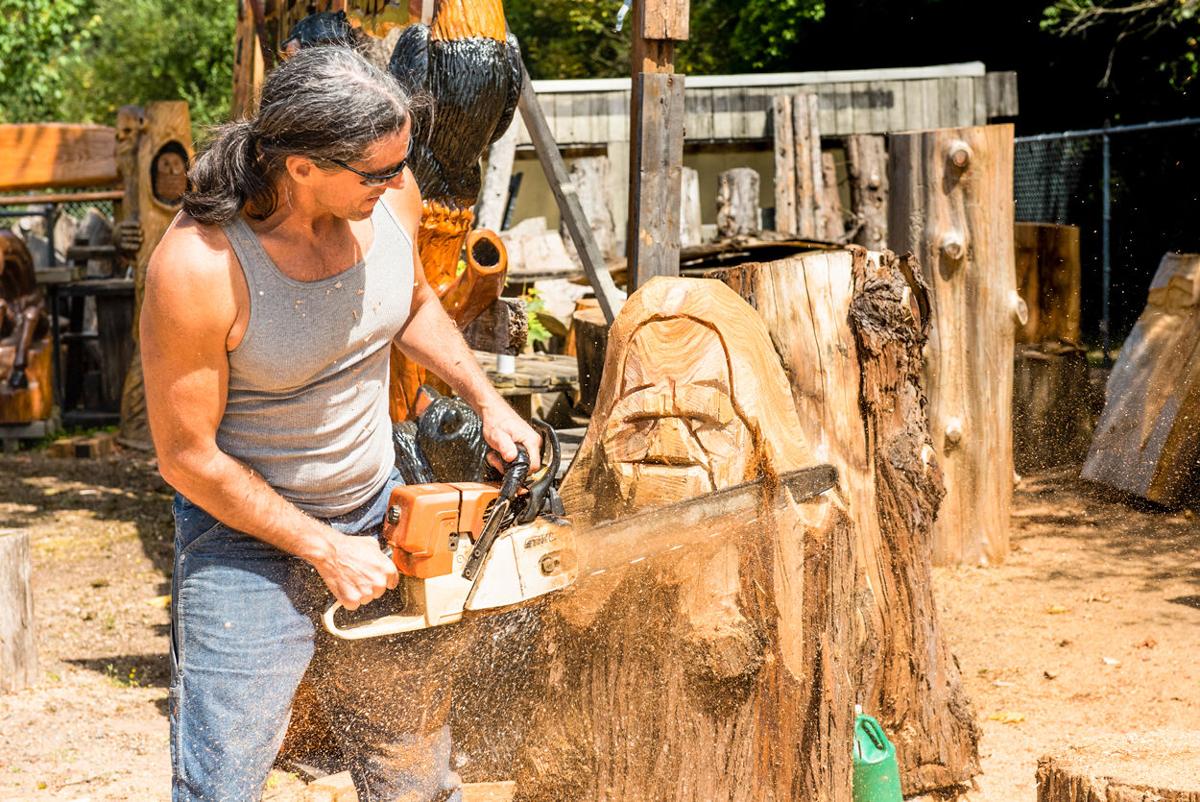 MATT HAMBROOK, of Hambrook Chainsaw Carvings in Ridgefield, demonstrates his technique for roughing out a design in the early stages of chain saw carving.

THIS FISH was carved from a salvaged piece of old growth cedar sporting 22 growth rings per inch, said Matt Hambrook of Hambrook Chainsaw Carvings in Ridgefield.

MATT HAMBROOK, of Hambrook Chainsaw Carvings in Ridgefield, crafts a wide variety of sculptures, wall hangings and furniture from salvaged wood and a chainsaw.

MATT HAMBROOK, of Hambrook Chainsaw Carvings in Ridgefield, demonstrates his technique for roughing out a design in the early stages of chain saw carving.

The shop is a chain link enclosure tucked into the corner of a gas station parking lot, and curious passersby stopping for a soda or to fill their tank wander over to peer at the detailed wood carvings, which spill into every corner of the space.

Matt Hambrook is a full-time chain saw carving artist, working from his home shop in La Center. He’s been selling his work for the past 10 years, up to 300 carvings a year. But when he started carving wood with a chain saw over 20 years ago, he had never cut anything more than firewood.

“I read about it and I just knew I wanted to do it,” he said.

He couldn’t find any books on the subject, and that was before the internet era, so he just picked up a chain saw and started practicing.

Hambrook’s first carving was a bear. Rather, an attempt at a bear.

“I worked on that for like six months. I’d work on it, come back and work on it a little more. I finally threw that on the firewood pile,” he said.

For at least 10 years, Hambrook was carving in his spare time after his shift at a steel mill. He then took a job building log homes, and he said his chain saw skills improved as he carved each construction log to fit.

He took every opportunity to pick up the skills he needed. He talked to other carvers at county fairs, and studied drawing books to learn about proportions.

And he used a lot of trial and error.

“I gave a bunch away before I ever sold any,” he said of his early carvings.

Hambrook carves a wide variety of figures from cedar and redwood, from signs and wall hangings to free standing sculptures and functional pieces like benches and tables.

“Anything I’m carving next is my favorite,” he said, grinning.

Many of the carvings Hambrook creates are custom pieces on commission. Most customers have an idea of what they want — sometimes a favorite woodland animal, or perhaps a totem – and where they want to display it.

Hambrook also does a lot of “stump carving,” he said. If a tree with sentimental value must be removed, he has them cut the stump at about 6 feet tall and creates a carving in the remaining stump.

Some carvings are built right into a home, such as decorative beams for a log cabin. One “man cave” featured a cougar head carved into the logs, he said.

Patio benches are very popular, said Hambrook. The “arms” of the bench are carved —bears, horses and totems populated his shop — and the seats and backs are thick slabs of wood shaped to gently follow the grain. The benches can be connected at an angle to curve around a fire pit or center table, creating a cozy feeling of enclosure.

Hambrook studied the totems he carves, intrigued by their history. Though commonly associated with Native Americans, totems originated in Polynesia and were brought here by early travelers who came across the Pacific Ocean. For many years, they were only crafted by natives of the Pacific Northwest, until trade routes opened up over the Rocky Mountains and their influence spread.

And “bigfoots are popular around here,” Hambrook said, laughing. His carvings prompt stories from shoppers of their own Bigfoot encounters.

Cute carvings sell best, maybe because women are in charge of the home decorating, Hambrook said. But sometimes a “man cave” is fair game for his outdoorsy creations, and all types of wood carvings are popular for patios and vacation homes.

The wood he uses all comes from fallen trees or reclaimed wood, emphasized Hambrook. He connects with loggers and tree services to take western red cedar or redwood trees that they remove.

He also gets calls about salvaged wood — he picked up a former telephone pole made of old-growth cedar which was over 2 feet across. It has 22 growth rings to the inch and would have been logged in the 1800s; there aren’t any more of them available, Hambrook said. He pointed out some pieces of a pier which was removed from the Columbia River in Vancouver; the tree might be 400 to 500 years old, he said, and it sat in the river for 100 years.

His dream job? A whole “man cave,” Hambrook said. He’s done all the pieces separately, but he would love to create carved wooden décor and furnishings for an entire room – posts, wall hangings, coffee tables and benches and a bar.

Most carvings are displayed outdoors, so a protective finish on the wood is important. Hambrook uses Minwax Polyurethane with a gloss finish, and recommends resealing the wood each year.

Hambrook holds his outdoor gallery open most weekend days from around 11 am to 4:30 pm, and is available by appointment.