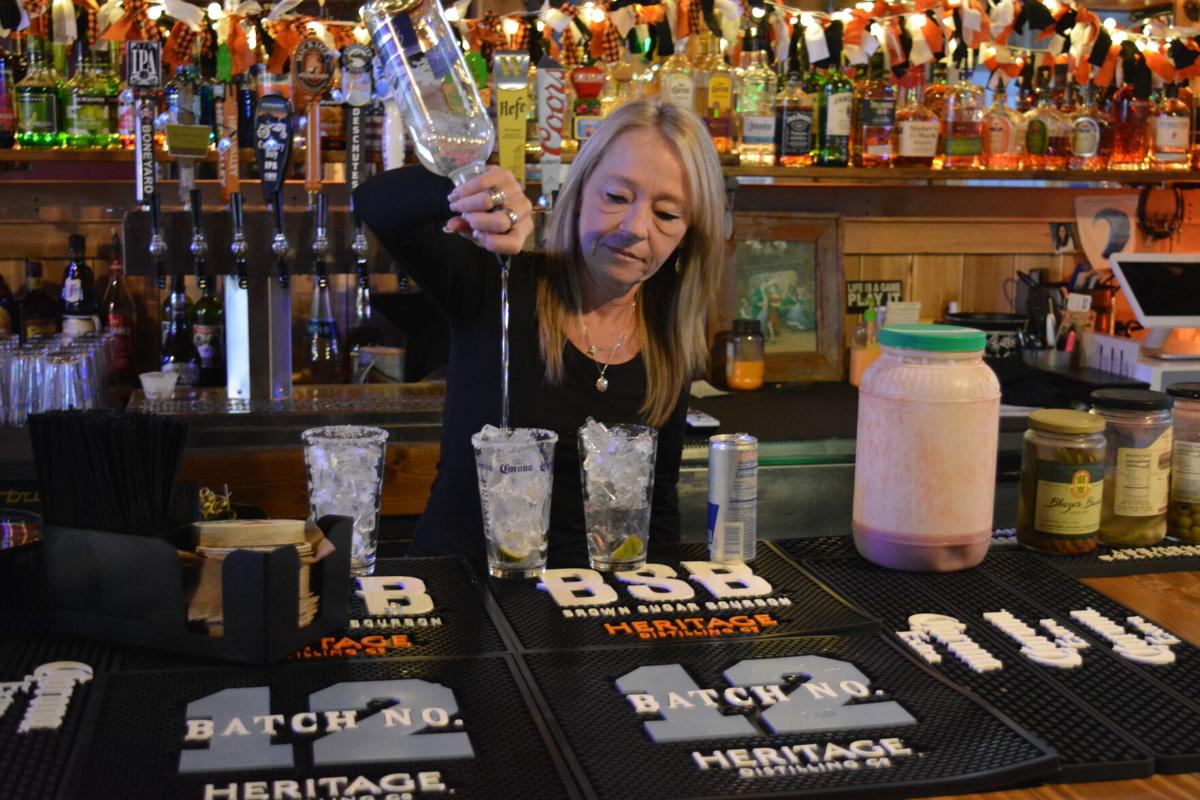 Owner and operator Polly Merwin pours vodka to mix up a bloody mary for customers on Thursday, Oct. 8. Merwin said it was her dream to open up her own bar after 32 years in the service industry. 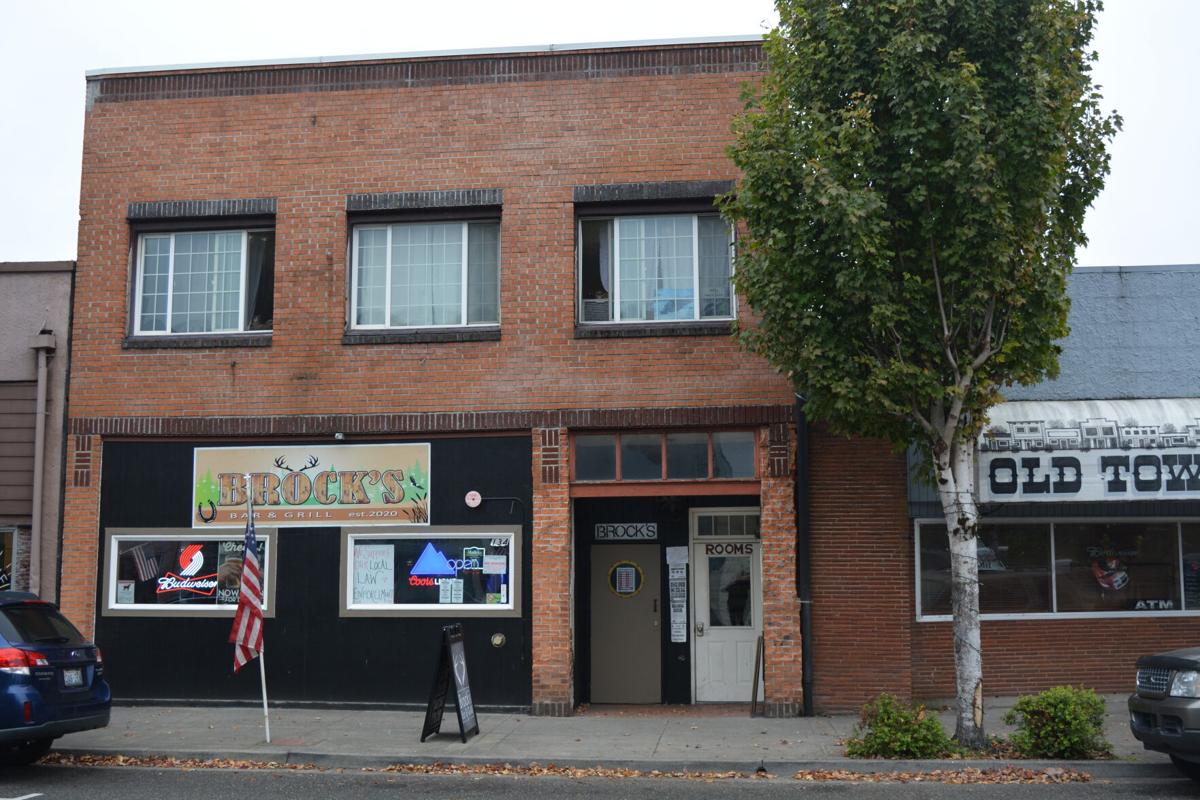 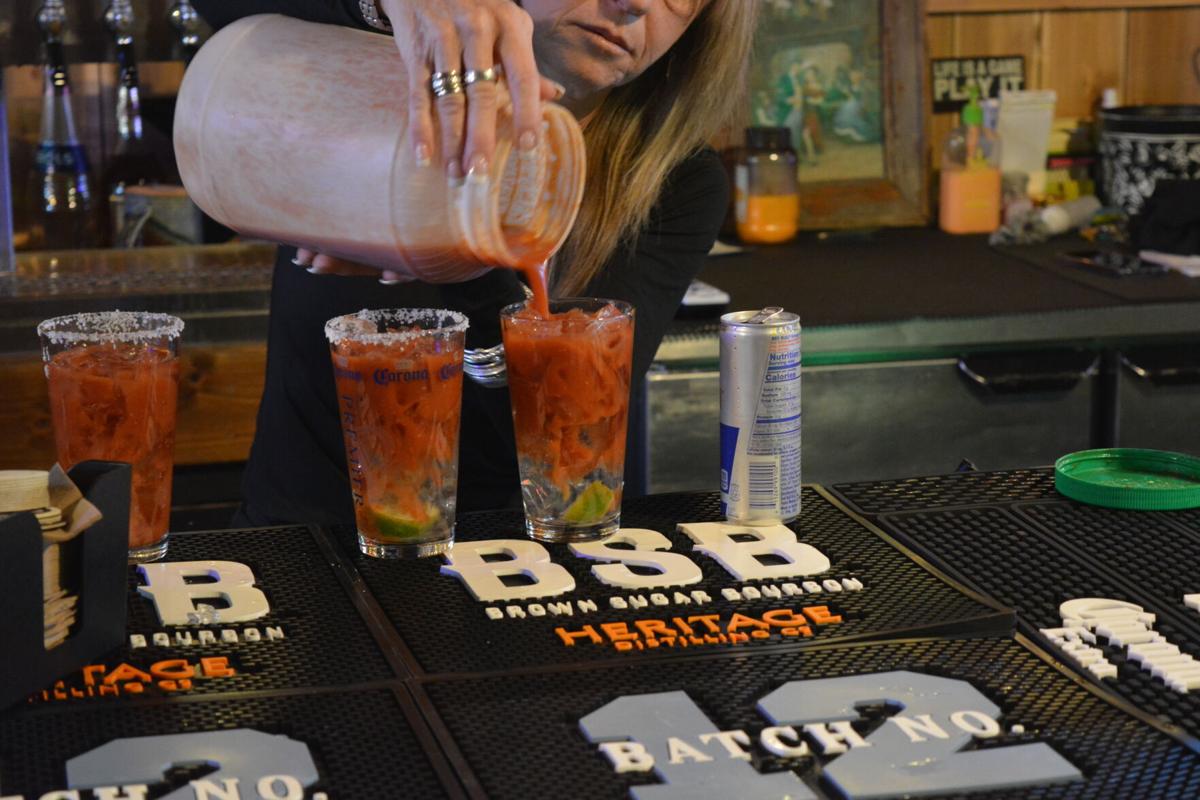 Another of mixing a bloody mary includes tomato juice and salt on the rim. 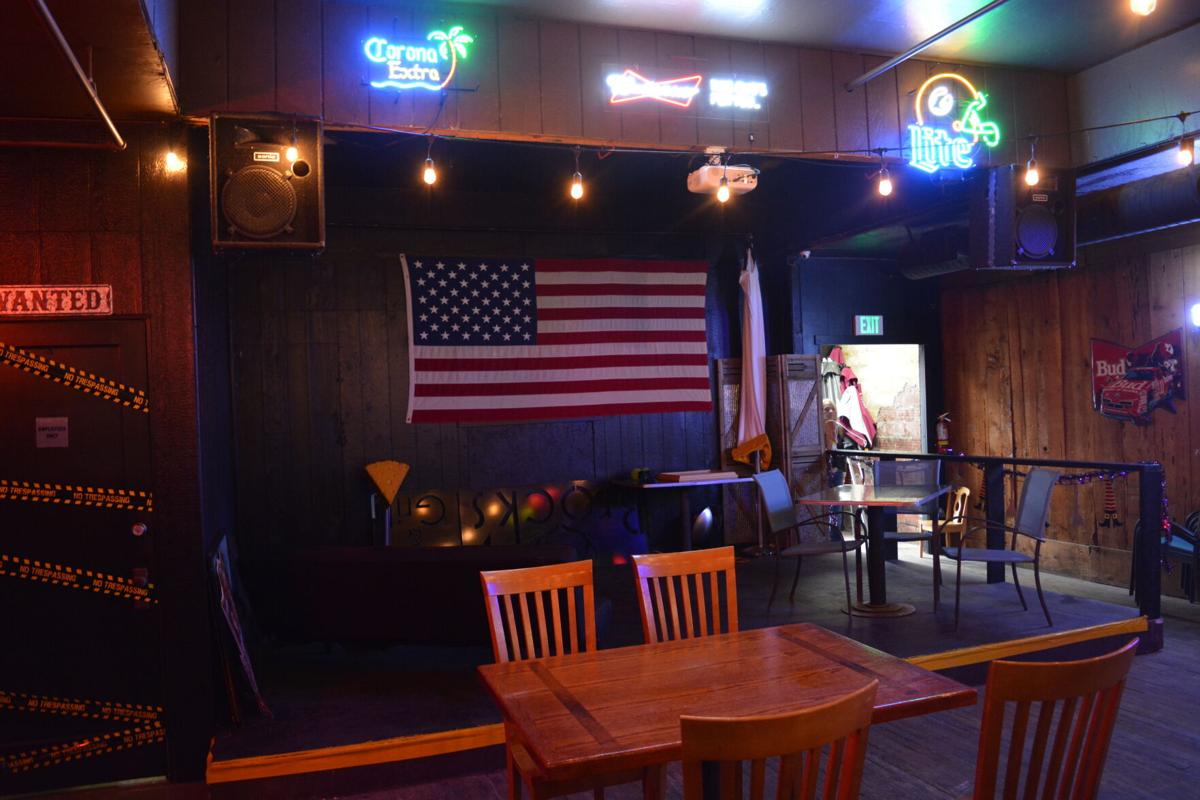 Near the back of the bar, customers can find a pool table, arcade machines and a stage that Merwin hopes to use to host live music in the future when COVID-19 restrictions are eased. The backside of the stage also converts into a projector screen for sports games. 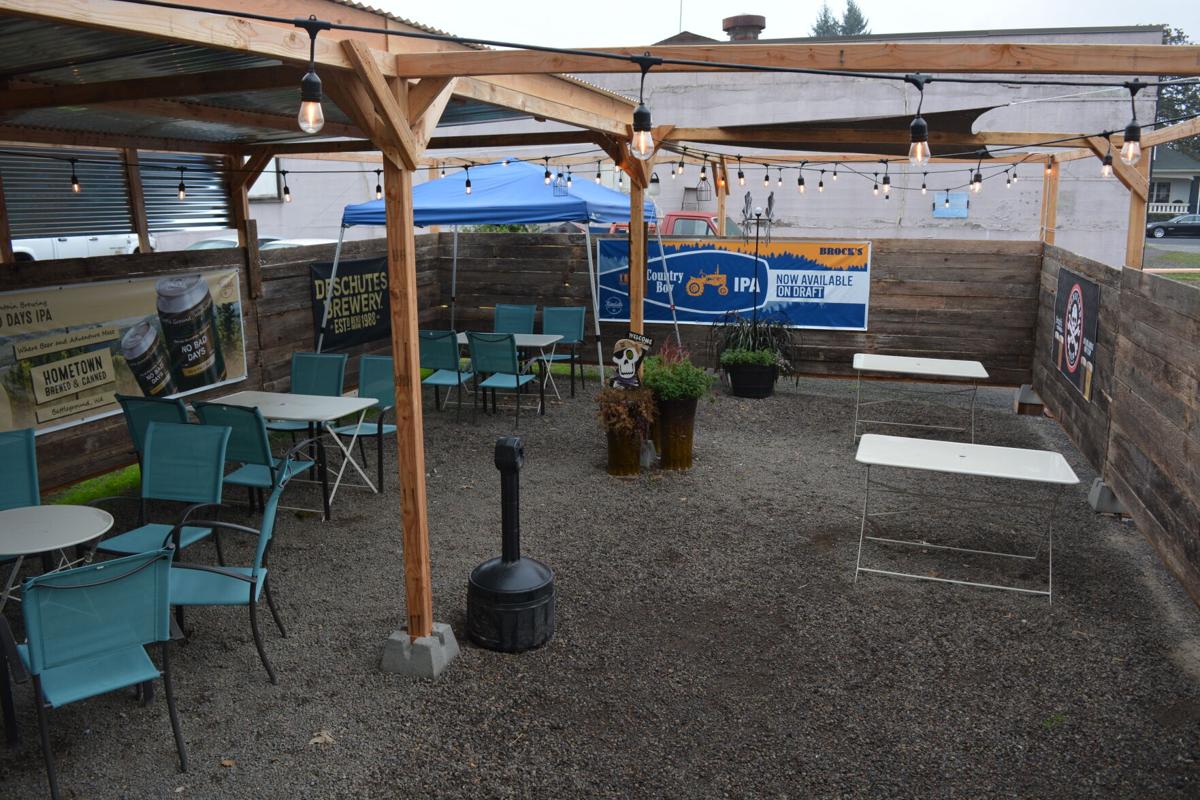 Out back, Merwin and her staff built a patio for patrons to enjoy drinks and food outside in the fresh air. 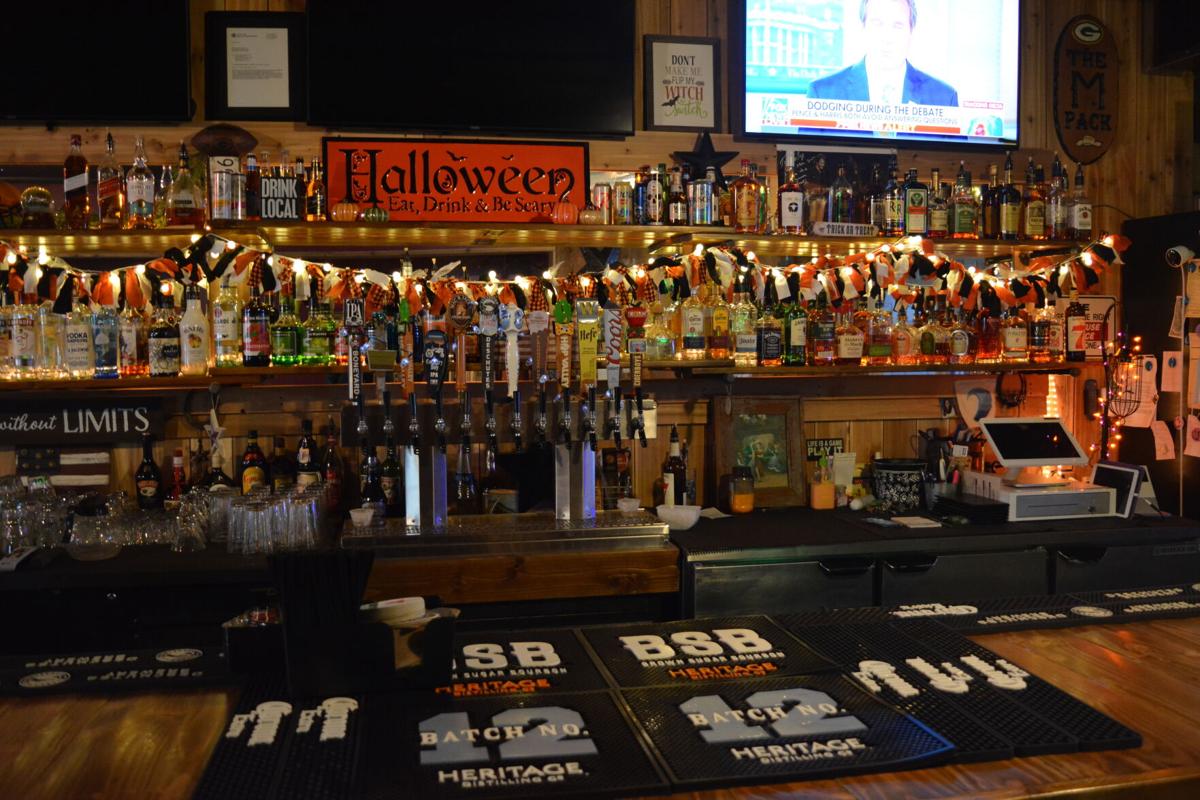 Merwin said she originally bought 20 bottles to stock the bar but has since added new liquors after hearing what the community wanted.

After spending 32 years working as a bartender in Portland’s restaurant and service industry, Peggy Merwin achieved her dream and opened up her own bar.

With the barstools pushed in, new felt on the pool tables and a stocked up bar, Merwin recently opened the doors of Brock’ Bar and Grill in historic old town Woodland. The business started off strong as Merwin and her staff served up cocktails, cheesesteaks and laughs to a bar chock-full of people that was “standing room only” for a bit.  Three days later, the coronavirus pandemic shut everything down.

“When it happened it was crushing,” Merwin said. “When people come into this restaurant I tell them about myself and why I’m here, it’s my passion (to serve people).”

Expecting the lockdown to last a couple of weeks to a month, Merwin said she set a goal to be productive with her time during the first stretch of the 2020 pandemic. She used the extra time to get procedures in order and tweak the menu. Lessons she learned from the three days open would be perfected. However, the pandemic began to stretch longer and longer. With no end in sight, she started selling food to-go in the Woodland community.

“I would come down here during the shutdown and sell takeout,” Merwin explained. “The saving grace for me was that I was sitting inside my dream.”

Merwin opened up Brock’s Bar and Grill after only living in Woodland for a short while. Moving up from Portland during the summer of 2019, Merwin “fell in love” with the Woodland community. Once she saw Woodland’s “Merwin Tap” closed up, she set her plans in motion. Quick to mention that she did not buy Merwin Tap but instead purchased the property the old bar used to sit on, Merwin and her friends and family set to work on a complete renovation and overhaul. After two months, she was ready to go.

“When you walk in, you wouldn’t know it was the old Merwin Tap,” she explained “The whole bar was redone.”

During her years in the service industry, Merwin dreamed of owning her own establishment. After years of working under a manager, she wanted to run things her own way: with a heavy focus on customer service and community involvement. If a customer wants a specific bottle on the shelf, Merwin goes out and gets it for next time. On tap, Brock’s offers a mix of local microbrews next to a local cider and Coors Light. According to Merwin, her taps are the coldest  you can find in town because she uses a “glycol system” (a refrigeration system which uses food-grade antifreeze to cool the beer as it travels through its distribution lines).

For those that prefer a mixed drink, Merwin’s three decades in the industry can help. While she can easily make classic mixed drinks such as Old Fashioneds, Martinis and more, Merwin said she can “mix up new drinks on the spot” if a customer doesn’t know what they want to have that day. Along with this, Merwin also offers a signature “Quarantini” that contains fresh blueberries, watermelon pucker and blueberry vodka.

Merwin’s love for customer service doesn’t stop at the liquor shelf. The food options range from classic deep-fried bar food such as mozzarella sticks, burgers and hot wings to reuben sandwiches, vegetable wraps and salads on the healthier end. She also reverts back to “old school” customer service techniques such as counting bills as they’re returned to you.

“I know what it takes to make people happy and customer service is number one,” Merwin said. “I want this to be a happy environment with good vibes.”

Along with a variety of food and drink options, the bar is full of entertainment such as a pool table, arcade games and enough television sets to let customers watch what they want to watch. Merwin even went as far as purchasing a “Diamond” pool table that customers loved.

“I saw how important it was to the community,” Merwin said. “So I found the person who had bought it and offered to buy it back.”

Merwin explained that community focus outside of the establishment is just as important to her as what happens inside. She wants to set up fundraisers for community-based organizations such as the school district and first responders. Although children aren’t allowed at the establishment, Merwin said she is “passionate about children and families” and hopes to help the children in the community through events such as clothing drives. According to Merwin, Brock’s Bar and Grill has already raffled off a blanket and raised money for the Woodland Police Department.

Once dine-in eating was reinstated during Phase 2 of Washington’s Safe Start Reopening plan, the crew at Brock’s Bar and Grill had something new to show the community: outdoor dining. Merwin explained that she took up a parking lot and built a space where patrons can eat and drink in the fresh air outside.

Building a menu catered around customers isn’t the only plan Merwin has for the future. Once restrictions around COVID-19 ease up, she hopes to host live music every weekend, have karaoke parties and even a “Jam Night” for local talent. Merwin again emphasised customer service and said she would bring in what the customers wanted.

While the crew at Brock’s Bar and Grill are slinging drinks and food at reduced hours and capacity due to COVID-19 restrictions, Merwin said she was happy to be back in business and is excited to operate at full capacity and hours (until late night) again. She recently started up a “verbal only” breakfast menu on Sunday mornings. For now, the menu includes basic breakfast items such as breakfast sandwiches and biscuits and gravy but Merwin thinks breakfast is going to stick around in the future.

The bar is currently open from 11 a.m. to 11 p.m.  Monday through Saturday and 9 a.m. to 11 p.m. on Sundays. Face masks are required while not sitting at your table and Brock’s Bar and Grill can provide a face covering for you if you don’t have one. Specials, menu updates and more can be found on the bar’s Facebook page at facebook.com/Brocks-Bar-Grill-107360060890718.