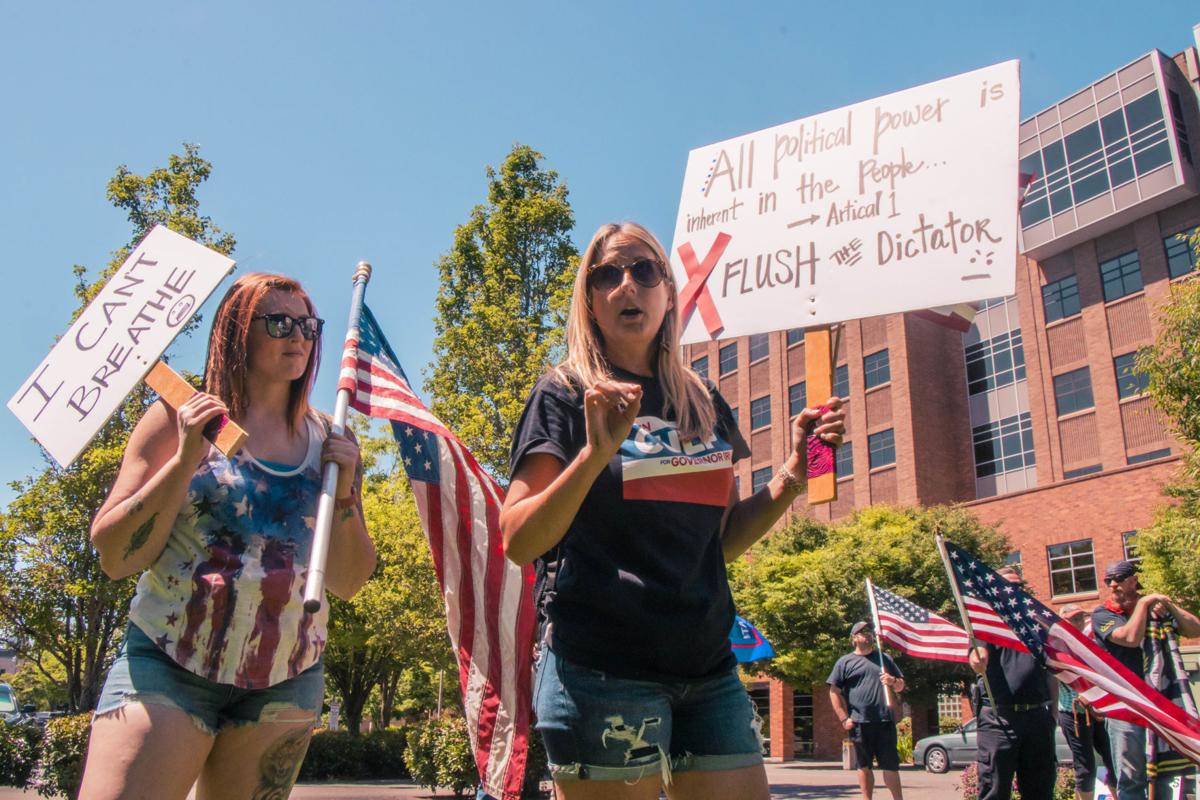 Justine Stimmel talks about signs she and fellow attendees of a "no mask" demonstration brought in opposition to Gov. Jay Inslee’s statewide mask mandate Friday afternoon in Vancouver. 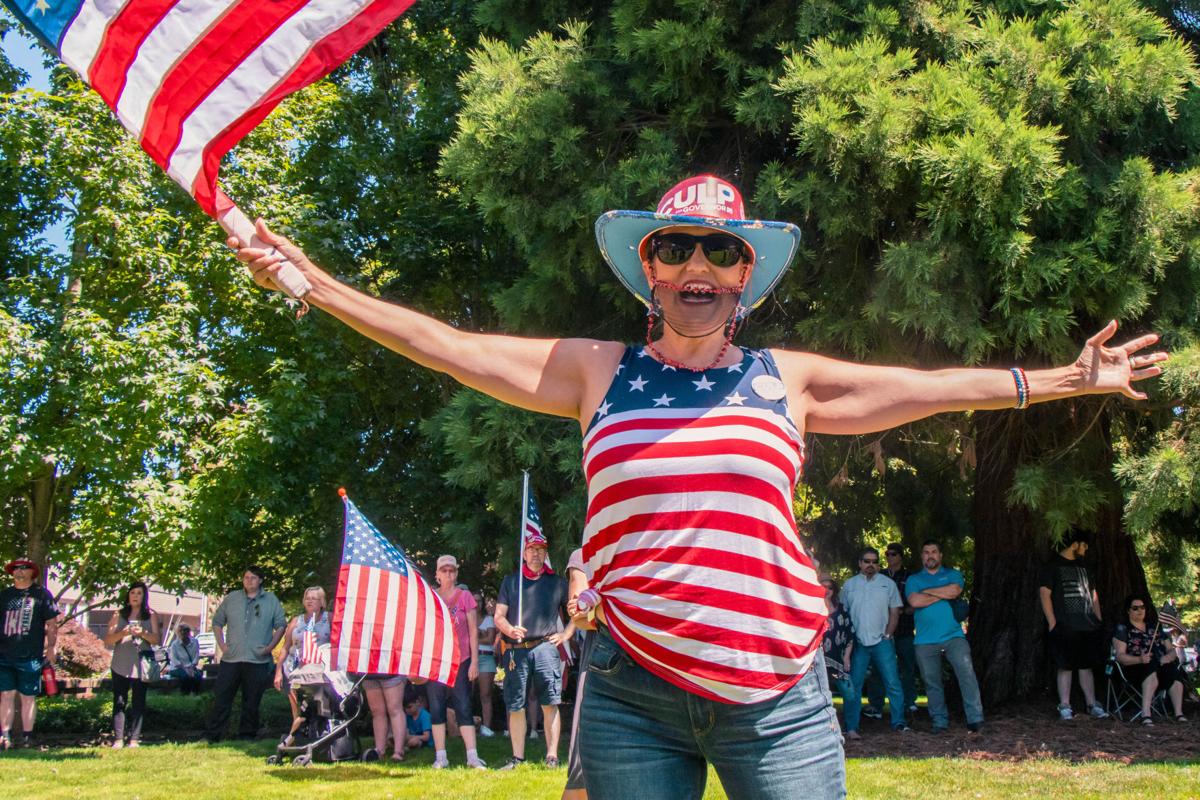 A Loren Culp supporter waves an American flag while wearing a custom made mesh mask during a demonstration against Gov. Jay Inslee’s new statewide mask mandate Friday afternoon in Vancouver. 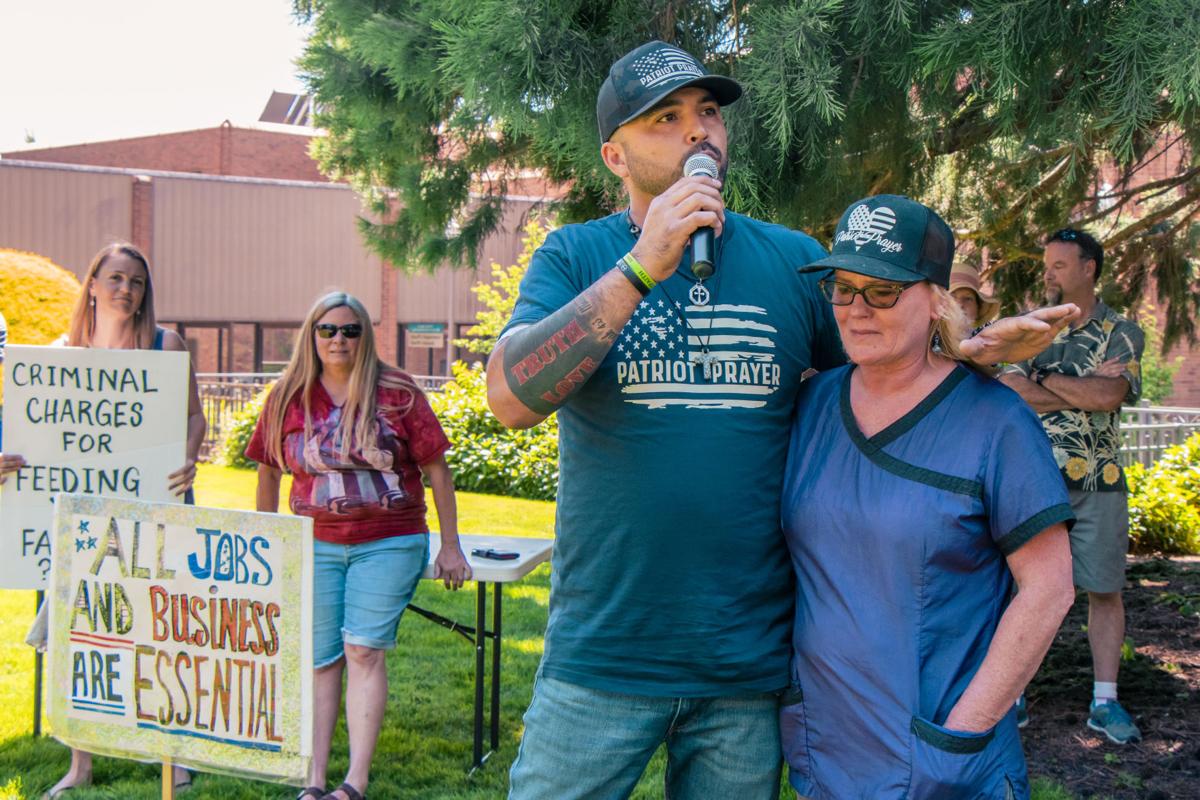 Joey Gibson, founder of Patriot Prayer, puts his arm around Kelly Carroll while addressing a group of protesters during a demonstration Friday afternoon in Vancouver. 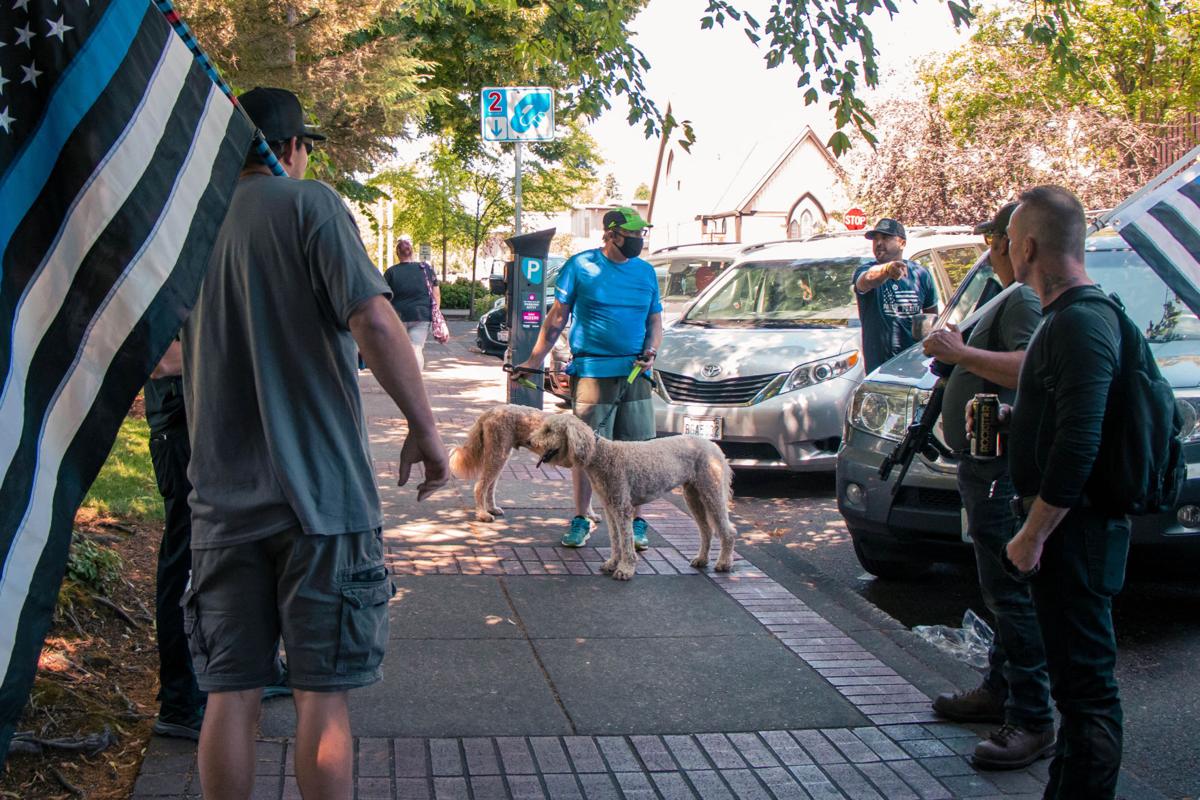 A masked park-goer exchanges words with Joey Gibson, founder of Patriot Prayer, and other armed attendees of a ‘no mask’ protest Friday afternoon in Vancouver. 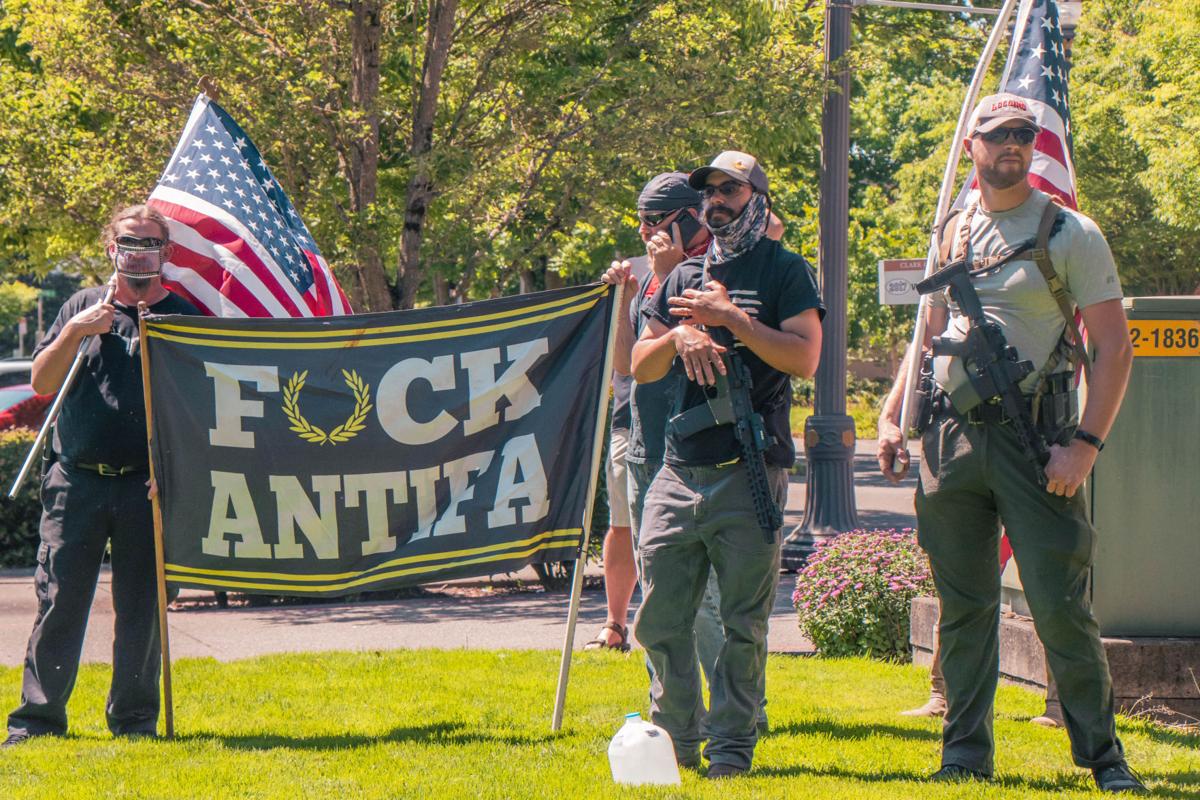 Armed attendees of a "no mask" protest hold a sign in opposition of Antifa Friday afternoon in Vancouver. 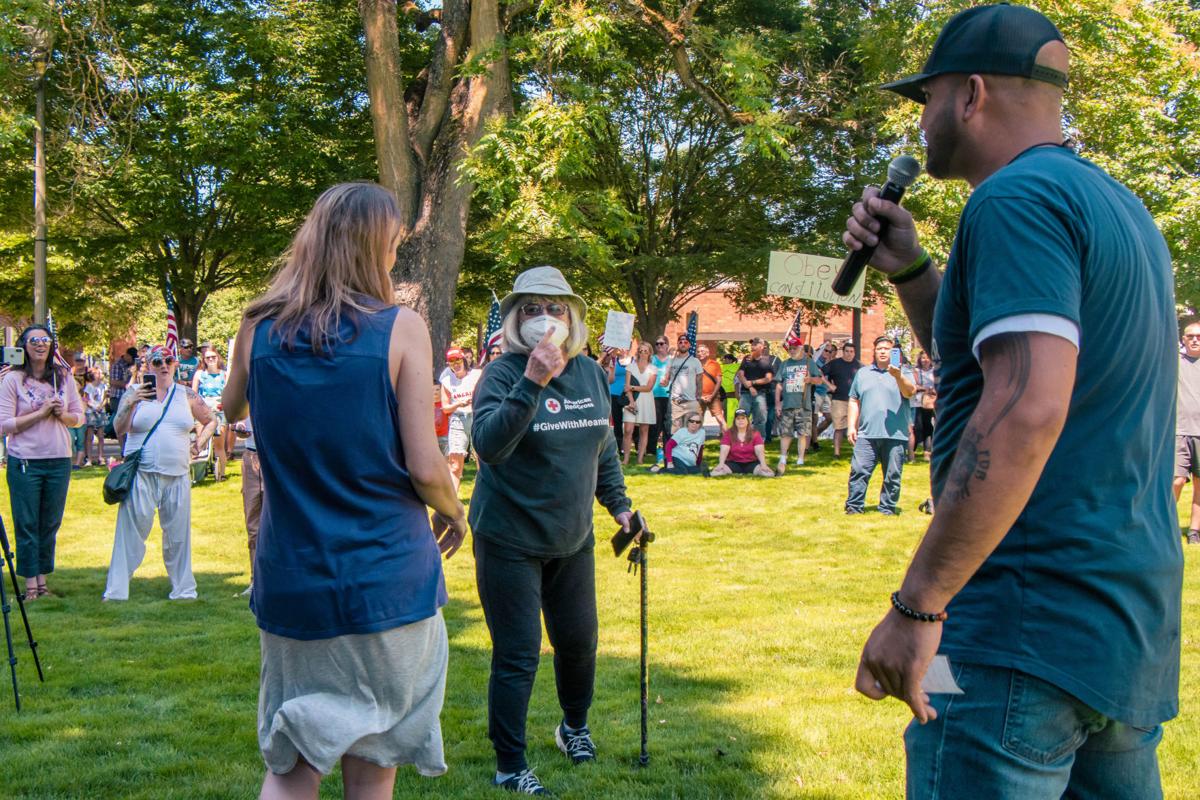 A woman wearing personal protective equipment confronts Joey Gibson, founder of Patriot Prayer, calling for him to "be responsible" as he addresses a group of protesters during a "no mask" demonstration Friday afternoon in Vancouver. 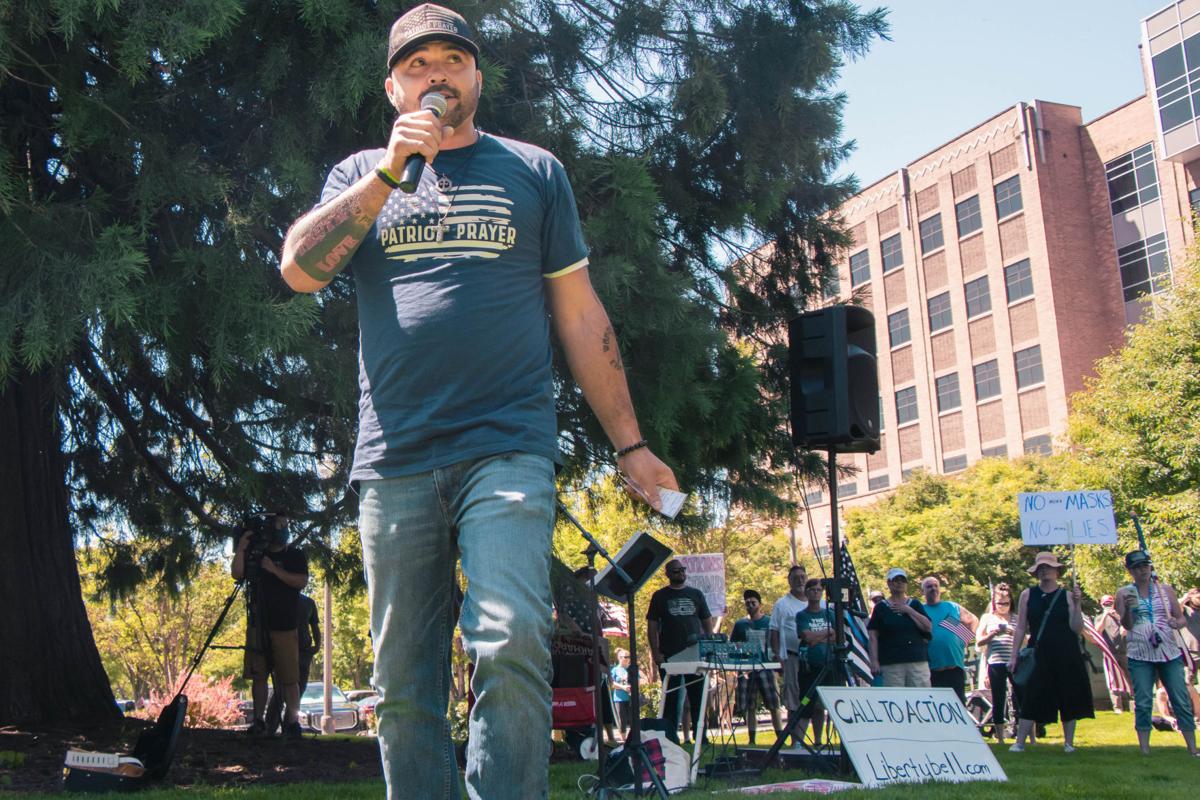 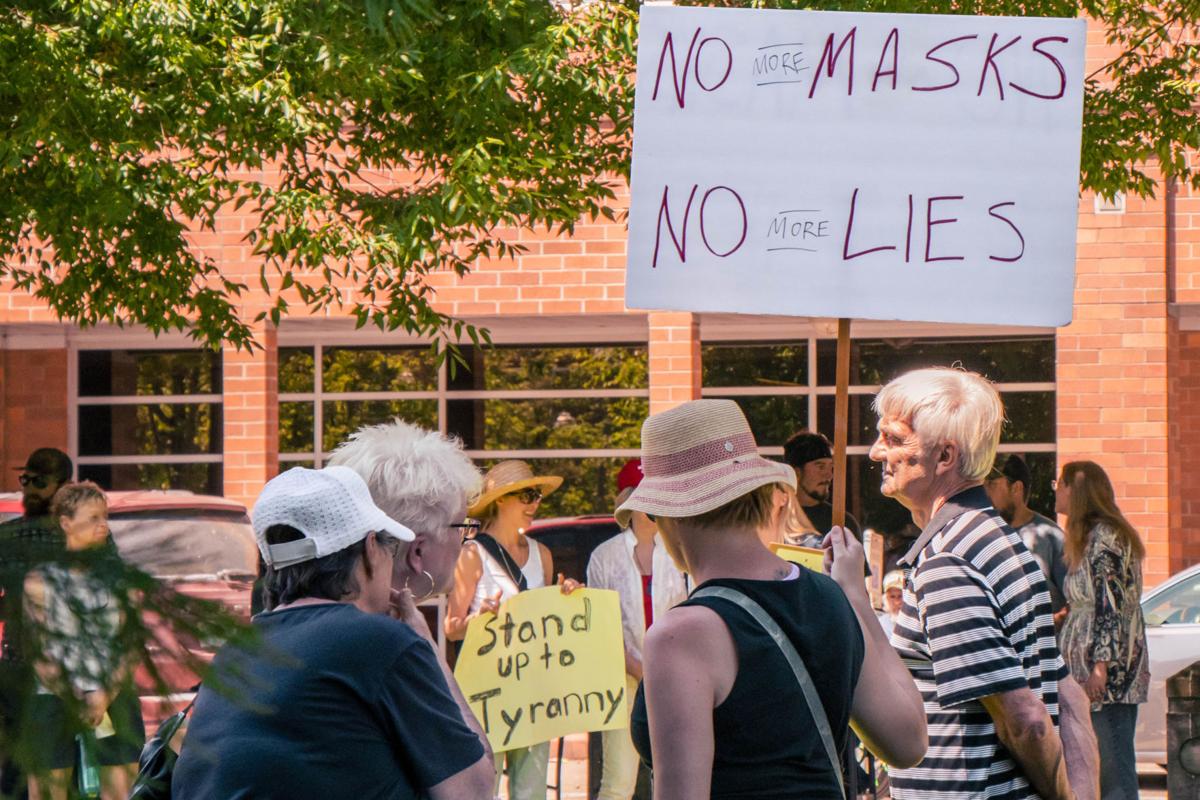 A woman walks with a sign that reads "No More Masks, No More Lies" during a  demonstration Friday afternoon in Vancouver. 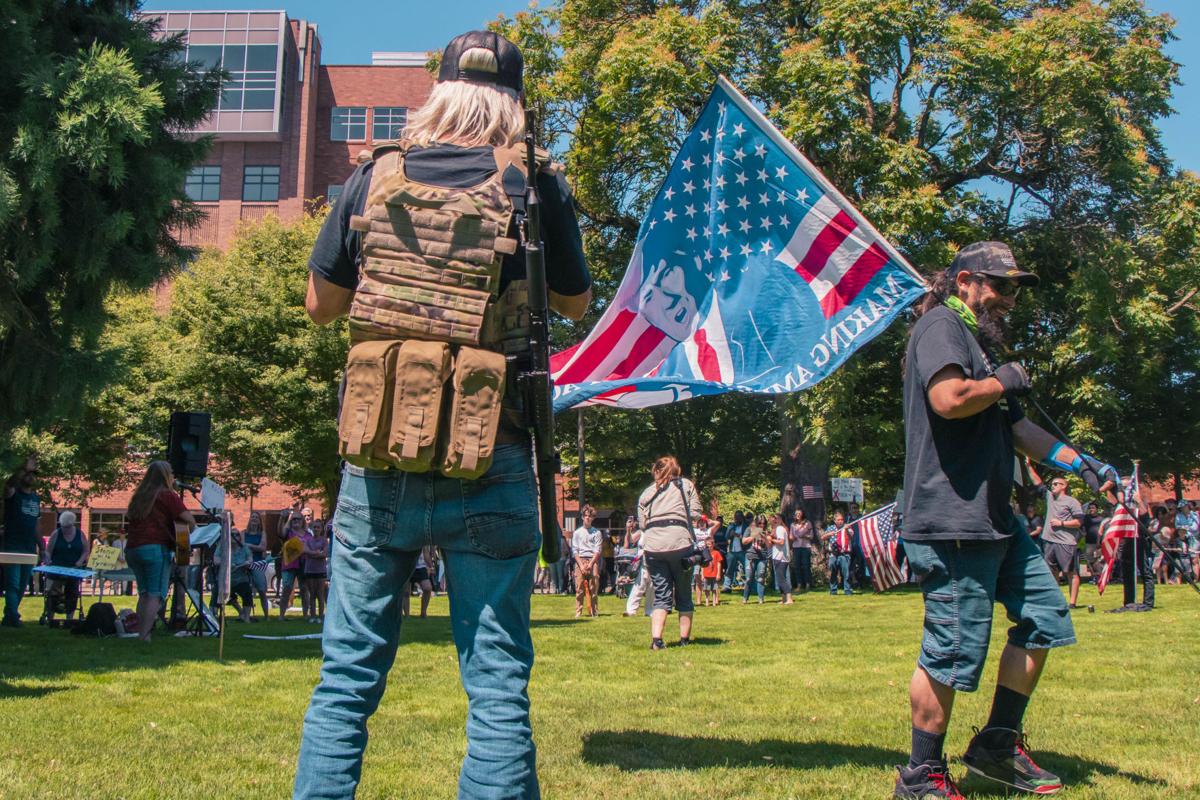 A man walks by carrying a large Donald Trump flag as protesters gather for a protest in defiance of Inslee’s new statewide mask mandate Friday afternoon in Vancouver. 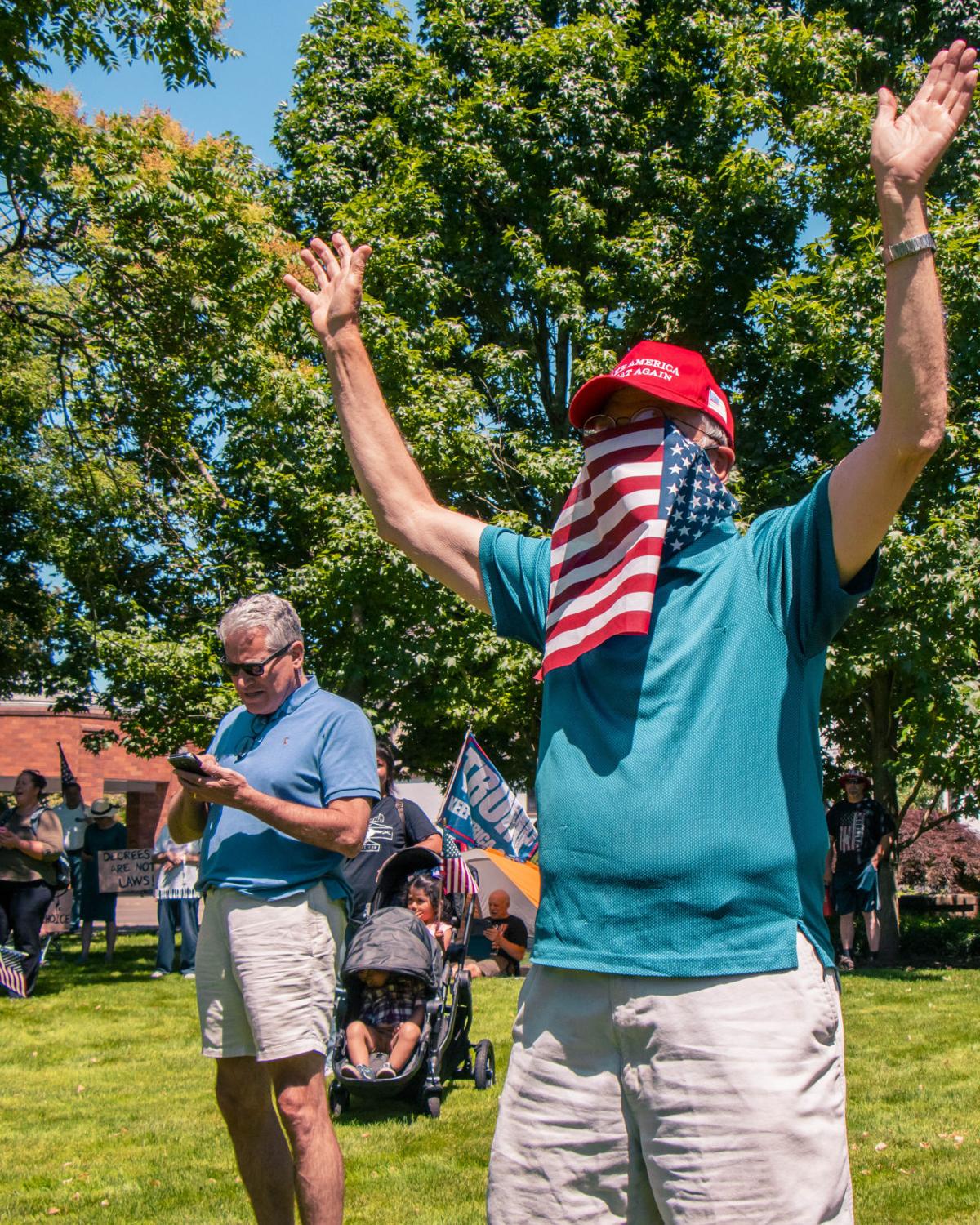 A man sports a Make America Great Again hat while wearing an American flag over his face during a protest in opposition of Inslee’s new statewide mask mandate Friday afternoon in Vancouver.

Those taking issue with a recent mask-wearing mandate from Gov. Jay Inslee descended upon the Clark County Sheriff’s Office headquarters in Vancouver Friday, June 26, as part of a “My body My choice, I WILL NOT Comply” protest the day the mandate went into effect.

Inslee announced the order on June 23 requiring the use of face coverings when in public where distances of 6 feet between individuals could not be maintained starting Friday. Organized by two groups — People’s Rights Washington and Patriot Prayer, according to a Facebook event page — the demonstration intended to push back on the mandate, claiming it was a violation of body autonomy.

“We must resist this order and demand our local Sheriff (not) enforce it upon the public,” a description for the event read.

As sheriff, I have been asked what the Clark County Sheriff’s Office will do about Governor Inslee’s latest proclamation ordering all Washingt…

Why aren't you attacking all those young liberals partying without masks. How about the protesters and rioters not social distancing? Ah liberals, hypocrisy is thy name!

As our elderly communities watch on as Republicans/conservatives not only neglect them but blatantly show disregard for their lives, I am hopeful that they will return the favor come November. I know my mom has “seen the light” just as I hope others have. The political party they grew up with/in is not what it is today. When the arrogant demands of freedom from wearing a mask usurp the simple action of showing concern for a large population in our communities...We have failed. Patriotism isn’t self indulgent arrogance and pseudo-pride...its a love for each other, our communities and towns. History shall reflect upon this time in our country with disbelief that so many would risk so much by simply refusing to wear a mask. Our children are witness to our failings. Hopefully, they will learn from our mistakes.